Purpose: The diagnosis of Necrotizing Enterocolitis (NEC) is still problematic and finding predictive biomarkers for earlier and better diagnosis is desirable. This retrospective study aimed to investigate the possible correlation between NEC and serum levels of γ-Glutamyltransferase (GGT), serum Total Bilirubin (TBil) and Calcium (Ca2+).

Methods: We collected data from 271 neonates of Han nationality (135 NEC cases, 136 non-NEC cases) admitted in the Xi'an Medical School First Affiliated Hospital from 2005 through 2015 who were of term (37-40 w) within 3 d after birth with normal weight (2500-4000 g) and normal serum ALT, AST. Their medical records of serum GGT, TBil, Ca2+ levels from laboratory tests were retrieved and statistically analysed.

Conclusion: Our data strongly suggest higher serum GGT levels, together with lower serum TBil and Ca2+ levels may be valuable biomarkers for NEC, and the combination use of the 3 biomarker candidates could be instructive for NEC diagnosis.

As an acute gastrointestinal emergency in neonates with difficulty in diagnosis, Necrotizing Enterocolitis (NEC) primarily affects premature neonates (more than 85% in neonates of early preterm or very low birth weight) [1] with a mortality rate of about 20-30% [2]. The other 10% of the NEC cases occur in term or late preterm infants [3], and most of the term NEC cases present within the first few days after birth. Although searches for the etiology of NEC have begun several decades ago, its pathogenesis remains unclear. NEC is considered to be a disease of multifactorial etiology, with cytokines, enteral feeding, infection, ischemia, prematurity and reactive oxygen species as its high risk factors, all of which have the potential to injure the protective gut barrier.

Despite some advances made in neonatal medicine, early and correct diagnosis of NEC remains challenging due to its nonspecific symptoms and rapid disease development. Physicians have to combine together clinical signs, imaging findings, laboratory tests to make an accurate diagnosis and appropriate treatment strategy, and still some NEC cases have been delayed for diagnosis and treatment. Hence, finding predictive biomarkers for earlier and better diagnosis is desirable [4]. A lot of work has been done with an attempt to search for reliable biomarkers that can help pediatricians to predict NEC probability, diagnose and differentiate it at earlier time points or even prevent it from happening. NEC biomarker researches have been carried out mainly in two directions, i.e., top-down and bottom-up. The top-down way has taken advantage of the omics, such as proteomics approach, to do a thorough screening of samples to see any molecules of significant differences between the NEC cases and control cases. The bottom-up way assumes the nature and etiology of NEC and analyse the relevant biomarkers in that direction. For example, using proteomic approach, several groups found promising biomarkers from urine, blood, and feces samples. The expression level of 21 proteins (8 increased and 13 decreased) was significantly changed in the buccal tissue of the NEC cases [5]. Mass spectra of plasma samples of the sepsis/NEC revealed that 25 peaks were significantly higher and 40 peaks were significantly lower than those of the controls [6] whereas 13 potentially relevant proteins were initially found from the urine samples by liquid chromatography/mass spectrometry, and seven of them were further verified by ELISA [7]. To search for new NEC biomarker(s) in the bottom-up direction, we investigated the correlation of serum GGT, TBil, Ca2+ with NEC and their biomarker potential for NEC diagnosis.

Considering that the levels of serum GGT, Ca2+, TBil are related to the gestational age, birth weight and liver function. For convenience to compare with the control group, we retrieved medical records of 271 neonates who were admitted within 3 days after birth from 2205 through 2015 in Xi'an Medical School First Affiliated Hospital, and of term (gestational age between 37 and 42 w) with normal birth weight (birth weigh between 2500 and 4000 g) and normal serum ALT, AST levels. The 135 neonates as the “NEC group” were diagnosed as NEC based on their clinical symptoms, such as irregular breathing, lethargy or growing anxiety, vomiting, fever or hypothermia, decreased bowel sounds, abdominal distention, gastrointestinal bleeding together with the radiological findings (portal venous gas, air-fluid levels, thickened bowel walls, gastrointestinal pneumatosis, pneumoperitoneum) [4,8]. The “control group” comprised of 136 neonates who were treated in the neonatal unit due to other reasons (imperforate anus, lower extremities vascular anomaly, epidermal cyst, congenital sternal deformity, urachal remnant). Their serum GGT, TBil, Ca2+ levels were included in the blood biochemical examination reports from the clinical laboratory and subject to statistical analysis described below.

The analytical procedures and statistical analysis were performed using SPSS Version 18.0, and statistical significance was set at 5%. In the descriptive analysis, parameters such as mean, median, and Standard Deviation (SD) were reported. Kolmogorov-Smirnov test was used to analyse data distribution. Independent t-test was used to compare the difference of normal distributed data from the NEC group and control group while Mann-Whitney U test was used for comparison of non-normal distribution data. Receiver Operating Characteristics (ROC) curve analysis was performed to assess the predictability of NEC with the levels of serum GGT, TBil, Ca2+ and the combination of these 3 biomarker candidates.

In addition, the cut-off point as predictors for NEC was arbitrarily determined in the ROC analysis to calculate the specificity, sensitivity, Positive Predictive Value (PPV) and Negative Predictive Value (NPV) of serum GGT, TBil, Ca2+ levels, and combination of these 3 biomarker candidates. To determine the accuracy of GGT combined with TBil or Ca2+ in the diagnosis of NEC, 2 combinations of markers or 3 combinations were tested. Predicted probabilities for the presence of NEC were calculated for these combinations using logistic regression analysis and then plotted in Receiver Operating Characteristic (ROC) curves. Overall diagnostic accuracy of either combination was represented by the Area Under the Curve (AUC). The best cut-off point of predicted Probabilities (P) was defined as the cut-off point with the maximum sum of sensitivity and specificity. To calculate the linear function describing all combinations of ideal cut-off value in the diagnosis of NEC, the cut-off Point (P) was used in the following equation:

Ln (P/(1-P))=B0+B1X1+B2X2+B3X3, in which B0 represents the constant of the logistic regression analysis, and B1, B2 and B3 represent the logistic regression coefficients of GGT and TBil, GGT and Ca2+, TBil and Ca2+, or GGT, TBil, and Ca2+, respectively. By calculating coordinates of intersections with the x- and y-axes, the linear functions describing the cut-off lines of GGT-TBil, GGT-Ca2+, TBil-Ca2+, and GGT-TBil-Ca2+ could be determined.

Table 1: Comparison of the serum GGT, Ca2+, TBil levels between the NEC group and control group. 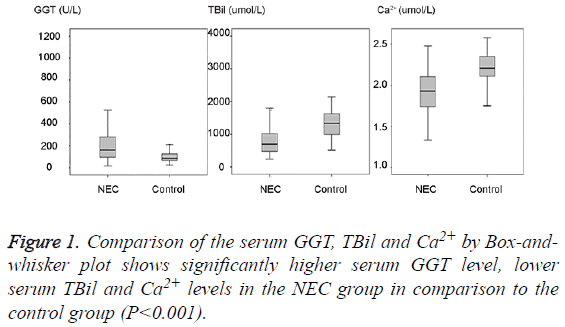 The data of the serum GGT, TBil, Ca2+ levels were further used to graph the ROC curve. By calculating the Area Under Curve (AUC), the best cut-off point, Specificity (SP), Sensitivity (SN), Positive Predictive Value (PPV) and Negative Predictive Value (NPV) were obtained (Figure 2). When GGT, TBil, Ca2+ were used in 2- or 3-combinations, combination of our 3 candidate markers (GGT, TBil, Ca2+) achieved the biggest area under the curve (0.908) (Figure 3). All the other diagnostic values including the best cut-off points for SP, SN, PPV, NPV, LR+, and LR- from this study and an oversimplified performance comparison with some published works in the literature to detect NEC were listed in detail in Table 2.

Table 2: Comparison of the diagnostic values for NEC between this study and some other published. 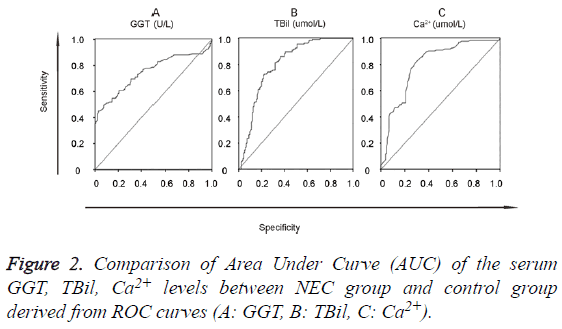 Figure 2: Comparison of Area Under Curve (AUC) of the serum GGT, TBil, Ca2+ levels between NEC group and control group derived from ROC curves (A: GGT, B: TBil, C: Ca2+). 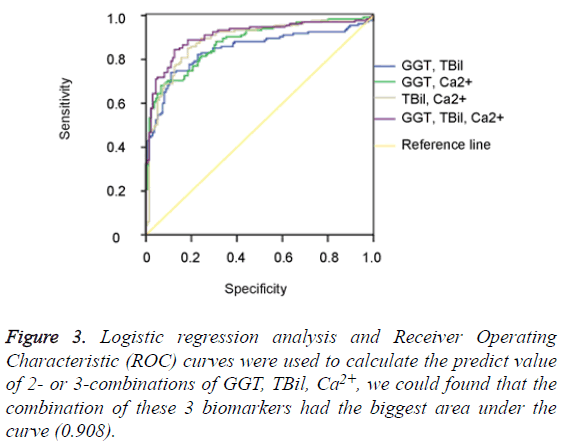 Figure 3: Logistic regression analysis and Receiver Operating Characteristic (ROC) curves were used to calculate the predict value of 2- or 3-combinations of GGT, TBil, Ca2+, we could found that the combination of these 3 biomarkers had the biggest area under the curve (0.908).

To diagnose NEC correctly in a timely manner remains difficult and challenging due to its sudden onset and rapid progression, and a lot of efforts has been made to identify NEC biomarkers for its early detection and diagnosis as highlighted in Table 2 and discussed below. In this retrospective study we have looked into routine tests received by infants at admission (at least in our institution) and found that the 135 NEC cases we studied generally have higher levels of serum GGT, lower levels of serum TBil and Ca2+ when compared with the control non-NEC group. Of note is that we collected data from NEC neonates of term (37-40 w) within 3 d after birth and with normal birth weight (2500-4000 g) to prevent the confounding effect of term/birth weight on the value of TBil and GGT with the fact in mind that NEC mainly affects preterm and underweight neonates.

Bilirubin is a free radical scavenger with anti-inflammatory and antioxidant property [9], and is rarely reported to be associated with NEC in the literature. One report described that 4 cases of stage III NEC had lower total serum bilirubin than their mild or disease-free controls during the first 14 d of life [10]. Since serum bilirubin level is a function of the activity of UGT1A1, albumin binding, and the bilirubin load [11], it is difficult but will be important to determine if lower serum bilirubin concentration is a cause or an effect of NEC. As one of the mortality risk factors, GGT is involved in a lot of disease processes and therefore has been very often used by life insurance industries to predict future disease risk, and to the best of our knowledge, GGT has never been found to be related with NEC before. A relatively constant serum Ca2+ concentration is vital for cellular function and under strict control by the neural/humoral factors. It is unclear what causes serum Ca2+ lower in NEC neonates. Together, the role of Ca2+, bilirubin and GGT in NEC pathogenesis remains to be studied. Other parameters, such as platelet count, Na+, were also included in the routine tests but were found not much different from the control group (data not shown), which is in contrast with other reports [12,13]. Platelets were found significantly decreased for surgery NEC cases in preterm and underweight infants at diagnosis when compared with medical NEC cases [13].

The difference in research design, such as the nature of the studies (prospective vs. retrospective), the scale (large plus multicenter vs. small plus single institution), the test (invasive vs. non-invasive), the purpose (predictive, diagnostic, differentiating, prognostic etc.), and so on, makes result comparison complicated, and sometimes less meaningful. Nevertheless, as shown in the oversimplified Table 2, the specificity of the combination of GGT and Ca2+, is at the top of the list, only second to S100 A8/A9 [14], although its sensitivity (68.1%) is quite modest. Furthermore, serum GGT, TBil, Ca2+ levels are routinely tested for and therefore readily available. Unlike others [7,13], our biomarker candidates (either single or in combination) have no power to discriminate the 100 medical NEC cases from the 35 surgical ones (data not shown). However, combinational use of our 3 biomarker candidates altogether achieved an AUC of 0.908 with a specificity of 84.4% and sensitivity of 87.5%, outperformed any single or 2-combination use of them all (Table 2), which is similar to the case that combination of I-FABP/calprotectin improved diagnostic accuracy for NEC [15].

In conclusion, higher serum GGT levels, together with lower serum TBil and Ca2+ levels, are strongly correlated with NEC cases in term neonates of the Han nationality with normal birth weight. These 3 parameters and their combinational use are worth further study to verify their correlation with NEC in preterm and underweight neonates in a perspective design and to determine if they are risk factors for all NEC cases and whether anyone of them can reliably serve as NEC biomarker(s) for prediction and diagnosis.