Atrial fibrillation (AF) is the most common arrhythmia and is associated with a 3 to 5 fold increased risk of stroke [1]. Degenerative valvular heart disease (DVHD) and AF frequently coexist as both share multiple common risk factors, such as age and hypertension. Degenerative aortic valve stenosis itself is associated with higher rate of AF because of pressure overload and diastolic dysfunction [2]. Similarly, both mitral regurgitation (MR) and AF is common [3], particularly in the elderly [3], who are also at high risk for AF [4] and because MR tends to cause diastolic dysfunction and left atrial (LA) enlargement, a possible precursor of AF [5]. Pre-existing AF was high across TAVI studies and widely ranges from 16% up to 51.1% [6]. Moreover, AF is a common problem in patients with mitral regurgitation referred for percutaneous intervention. In the EVEREST II study, AF was present in 27% of the study population at baseline [7]. These patients are usually older, have advanced valvular disease [7] and non-cardiac comorbidities [8]; hence, they require long-term anticoagulation as a prophylaxis against thromboembolism. Moreover, percutaneous mitral valve (MV) repair and its consequences; blood exposure to rough surface and turbulence flow through the valve can lead to blood stasis in the left atrium which may increase the risk of thrombus formation and mandates appropriate anticoagulation, especially if AF coexists.

Transcatheter valve therapies (Transcatheter Aortic Valve Implantation [TAVI] and MitraClip) has evolved as a promising new technique for the patients with DVHD deemed ineligible for surgery [9-11]. In general, the use of anti-platelet and anticoagulants before, during, and after the transcatheter valve procedures is not well defined and left to the discretion of the operating physician. Furthermore, the appropriate anticoagulation strategy in non-valvular AF patients undergoing percutaneous valve procedures and the choice of proper anticoagulant agent remain a matter of controversy with no sufficient data guiding the therapeutic strategy.

New oral anticoagulants (NOACs) have emerged as good alternatives to the usual vitamin-K antagonists with considerable efficacy and safety that was consistent across a wide range of patients with non-valvular AF [12]. Use of NOACs was associated with similar or even lower rates of both ischemic stroke and major bleeding compared to adjusted dose warfarin (INR of 2.0 to 3.0) [12].

However, patients with Valvular AF, defined as having mitral stenosis or artificial heart valves, have been systematically excluded from the pivotal randomized clinical trials testing the NOACs [13-16]. The pathophysiological reason for excluding these patients was that the mechanism of thrombus formation in this particular cohort may be substantially different from the usual AF patients. Nevertheless, the exclusion criteria for concomitant valve disease varied slightly in these trials, with exclusion of most valvular disease patients implemented in some studies [13,14] while others included some patients with nonrheumatic valvular disease, valve repair or bio prostheses [16].

All patients referred for percutaneous MV repair will be screened and the eligible non-valvular AF patients with moderate-to-high risk for stroke based on CHA2DS2-Score calculation, regardless of the mitral regurgitation etiology, will be enrolled after giving written informed consent.

All patients with non-valvular atrial fibrillation (paroxysmal, persistent or permanent) and CHA2DS2-Score of 2 or more referred to percutaneous mitral valve edge-to-edge repair will be included. 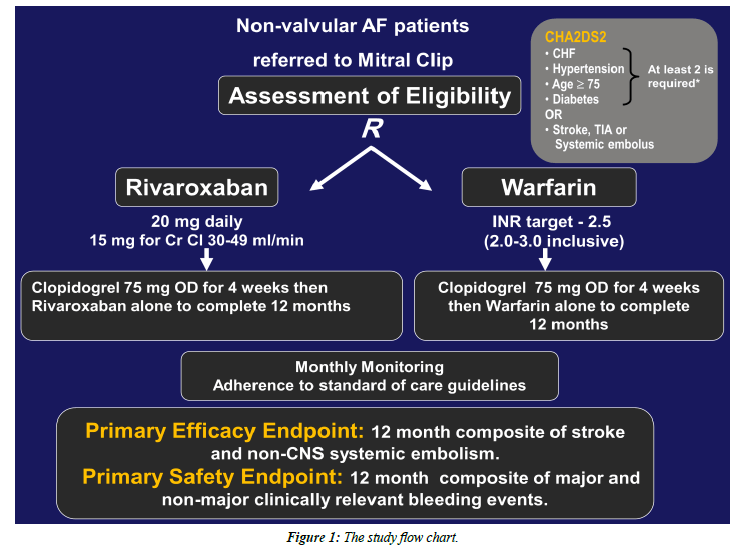 • Eligible patients will be randomly allocated to each study arm prior to the Mitral Clip procedure, to receive either:

- Warfarin therapy will be initiated and adjusted before the Mitral Clip procedure and Clopidogrel will be started immediately after the procedure and both therapies will be continued for 4 weeks, then warfarin alone to complete 12 months.

- Peri-procedural withdrawal of warfarin with or without bridging anticoagulation will be left to the operator indiscretion.

- Both Rivaroxaban and Clopidogrel will be initiated after Mitral Clip procedure and continued together for 4 weeks then Rivaroxaban alone to complete 12 months.

• Peri-procedural anticoagulation in both study arms will be according to the usual practice standards.

• Patients in both groups will be evaluated for the occurrence of primary and secondary endpoints at 1, 6 and 12-months follow-up.

The primary efficacy end point: The composite of stroke (ischemic or hemorrhagic) and systemic embolism.

Outcome definitions: All endpoint definitions will be according to the recent Consensus Document from the Mitral Valve Academic Research Consortium [18].

We think that this innovative idea might have a clinical impact which can solve the controversy at this point, and More importantly, the results of these studies can be used as a framework for further studies to assess safety and effectiveness of rivaroxaban in patients undergoing biological valve or percutaneous bio-prosthetic implantation if anticoagulation is required.

Authors have nothing to declare.