In the past decades, a large number of methods have been proposed for non-rigid registration, such as feature-based algorithms [5-7], intensity-based approaches [8-10], and physical models [11,12]. However, very few methods focus on registration of pelvis images with reasonable results. For instance, Gao et al. [13] introduced an appearance embedding statistical deformation model which was built using the node positions of deformations obtained from registration of pelvis CT images and applied for bony pelvis segmentation from MRI images. To match the femur and pelvis from 3D ultrasound images, Barratt et al. [14] matched bones by manually adjusting parameters that defined a rigid-body transformation with scaling, which provided initial estimates for the followed intensity-based non-rigid registration. It should be noted that the surface of the bone of interest is delineated semi-automatically before registration which is a time-consuming process and the registration accuracy also relies on the segmentation quality. At present, registration of pelvis images is still a problem to solve in medical education and clinical practice, and it is necessary to improve the accuracy of registration for particular clinical applications, which provides a strong motivation for developing new technology to improve registration efficacy and accuracy.

In this study, we present a hierarchical framework in which we use Normalized Mutual Information (NMI) as the similarity measure and B-splines as transformation for non-rigid registration of clinical images. The proposed method makes full use of the advantages of the multi-resolution schema and obtains reasonable registration results through a coarse-to-fine process.

Given two images A and B, the MI of two images expresses how much the uncertainty on one of the image decreases when the other one is known. Therefore, the MI is assumed to be maximum when the two images are well matched. However, the poor registration may cause a high MI value which has been found in previous publication [15]. Therefore, we use NMI as the similarity metric which is defined as:

where ϕj are parameters which represent the displacements of control points and are B-spline basis functions.

From March 2013 to August 2014, 55 female patients with cervical cancer received radiotherapy and their CBCT images were acquired at Daping Hospital of Third Military Medical University in China. The patients were placed in the supine position on a flat couch and CBCT images were obtained before treatment. Each patient was imaged more than 10 times in different days and the 3D CBCT data was reconstructed every time. Each 3D CBCT image is composed of 40-60 slices and reconstructed on 512 × 512 matrix. Each image voxel represents a special resolution of 0.6 mm × 0.6 mm × 2.5 mm. We randomly selected ten pairs of CBCT images to conduct our registration experiment and applied the proposed method to match pelvis CBCT images in this study. The scanner table was removed according to its position in each image prior to registration. 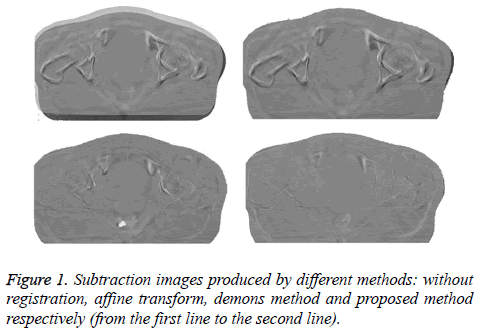 We calculate the width of the gray-scale histogram to evaluate the quality of the subtraction images produced by different methods (as shown in Table 1). In general, the narrower the histogram width, the better the quality of the subtraction image [17]. The subtraction images have a large Mean Histogram Width (MHW) of 144.56 before registration, which is reduced to 115.56, 86.27 and 69.89 respectively for affine transformation, demons method and the proposed algorithm. In addition, by calculating the NMI, we obtain the mean NMI (MNMI) of 0.66 before registration which is improved to 0.75 and 0.89 respectively for affine and demons methods. However, the proposed method achieves the highest MNMI of 0.93, which is more suitable than the other two methods for registration of pelvis CBCT images.

In this paper, we presented a non-rigid registration method using a hierarchical framework in which the normalized mutual information is used as similarity measure and B-splines are used for transformation. Differently from many methods limited to intensity conservation, the proposed method is able to handle registration of images with intensity variation. Experiments show that the proposed method archives more accurate and reasonable registration results than affine and demons methods in alignment of pelvis CBCT images, providing an alternative way to support non-rigid registration of medical images. Moreover, the proposed algorithm shows potentials for facilitating image-guided radiation therapy in which higher treatment dose can be delivered to a precise location through the use of image registration. Our future work will focus on extension of the proposed algorithm and its application to multimodal image registration.

The authors declare that there are no competing interests regarding the publication of this paper.