Background: Nonfunctional-kidney caused by primary localized ureteral amyloidosis is relatively rarely reports. However, the ureteral localized amyloidosis is similar as the ureteral primary carcinoma in Computed Tomography (CT) iconography. The misinterpretation should be avoided for urologists, radiologists and pathologists.

Conclusions: In this case, we found that the ureteral primary amyloidosis could rarely induce the nonfunctional kidney. Meanwhile, it’s important to distinguish the stenosis and calcification caused by ureteral carcinoma or amyloidosis. The diagnoses of carcinoma and benign amyloidosis could lead to different therapy strategy and prognosis.

Amyloidosis is induced by extracellular deposition of misfolded proteins in the insoluble beta pleated physical format [1]. Amyloidosis is classified into systemic or localized disease. In the systemic type, the deposition is deposited in a wide variety of organs. In contrary, in the localized type, the amyloid deposition is confined to an organ, commonly the lungs, skin, or urinary tract system. Amyloidosis can also be classified into primary, secondary or hereditary disease. Primary amyloidosis is associated with a latent immune dyscrasia, including multiple myeloma or Waldenstrom’s macroglobulinemia. Secondary amyloidosis normally arises as a complication of the underlying chronic inflammatory disease. Hereditary amyloidosis contains a heterogeneous group of conditions which comprise distinctive patterns of familial clustering and organ involvement [2,3].

A 41 y old woman consulted for intermittent left flank pain for 1 month. Physical examination was normal. Routine laboratory studies were within normal limits. Renal ultrasound scanning demonstrated left hydronephrosis and hydroureter. CT revealed a cystic low-density mass (18 × 15 mm), with a thin, calcified and smooth wall in the upper pole of the left kidney (Figure 1). CT also revealed a dilatation of the left renal pelvis and the full-length of left ureter, and a stenosis of the left distal ureter. The ureteral wall of the stricture part was thick and rough with scattered nodular calcifications. Contrast enhanced CT showed moderate enhancement of the lesion. No enlarged lymph nodes were found nearby. Nephro-dynamic imaging: Total-GFR: 73.43 ml/min, R-GFR: 65.76 ml/min, L-GFR: 7.67 ml/min. Left ureteroscopy revealed a follicular mucosal bulge with offwhite material at the stenosis of the left distal ureter. Specimens were taken from the lesion site and pathological result revealed eosinophilic acellular material in the left distal ureter. Congo-red staining was positive. The patient was treated with nephrectomy due to nonfunctional kidney (L-GFR= 7.67 ml/min). Histopathological analysis revealed eosinophilic acellular material with calcifications, ossification and cystic degeneration in the upper pole of the left kidney. Congo-red staining was positive, which proved the previous ureteroscopy result (Figure 2). The ultrasound examination at follow-up at the end of 9-months did not reveal any evidence of recurrence.

Figure 1: The abdominal precontrast CT scan. (A) Coronal CT, the pointed area showed the stenosis and calcification (B) Sagittal CT. 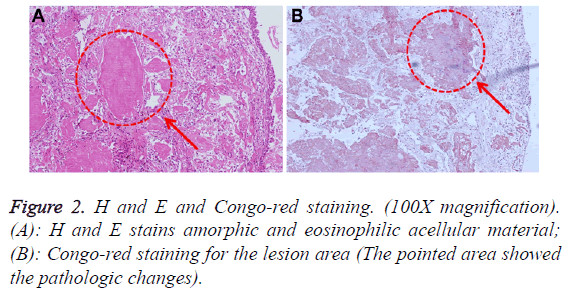 Lehmann described the first case of localized amyloidosis of the ureter in 1937 [4]. Then, more cases have been reported in succession. The majority of the amyloidosis patients were women aged 40-60, suggesting that age and sex were important factors in the incidence of the disease [5].

The main characteristics of localized ureteral amyloidosis were as followed: (1) the immunohistochemical type, which is primary amyloidosis without systemic diseases; (2) without multiple myeloma; (3) the prognosis, which is associated to the site of the lesion, rather than its type [6].

According to our report, primary localized ureteral amyloidosis is characterized by a thickened ureteral wall, ureteral narrowing and hydronephrosis. Intratumoral calcification of ureteral malignancies may also be seen on CT as our case. However, the consensus is that there are no specific findings between amyloidosis and carcinoma. Thus, ureteral amyloidosis has often been misdiagnosed for urothelial cancer since the similarity of the clinical manifestations and findings on intravenous urography and CT [7]. Therefore, radiology is useless for amyloid, and diagnosis requires the demonstration on histology [8].

In order to avoid misinterpretation and overtreatment, urologists, radiologists and pathologists should be aware of this disease despite the rarity of localized amyloidosis. Histological examination is required for definitive diagnosis and proper management. When the diagnosis of primary amyloidosis is made, it is significant to pursue further work-up to evaluate whether it is systemic amyloidosis or primary amyloidosis [9]. Since the systemic amyloid like amyloid caused by multiple myeloma should be more attention on the systemic symptom. Localized amyloidosis could be divided into 2 stages: the nonobstructive stage and the obstructive stage. As for the ureteral system, early eradication is not necessary with non-obstructive localized amyloidosis. However, regular follow-up with ultrasonography or CT need to be used for monitoring the progress of the stenosis. Ablation or local excision need to be performed only if the stenosis becomes obstructive or other problematic [10]. When the stenosis of the ureter leads to nonfunctional kidney, nephrectomy is unavoidable, because nonfunctional kidney caused by chronic renal obstruction is the potential indication for nephrectomy [11,12]. In this case, nephrectomy was performed due to nonfunctional kidney. Then, regular follow-up examination was recommended and there was no recurrence in more than 9 months.

Nonfunctional kidney caused by primary localized ureteral amyloidosis was rarely reported. Because of the similar of amyloidosis and carcinoma in medical imageology, misinterpretation and overtreatment always occurred. However, vastly different therapy strategy and prognosis of the different amyloidosises’ stages and ureteral carcinoma made the differential diagnosis necessary.

This work was supported by Graduate innovation Fund 2016109 of Jilin University.