The aim of this study was to investigate the effect of different concentrations of antioxidants on ABCA1 mRNA expression in TNF-α stimulated hepatocarcinoma (HepG2) cell line. TNF- α-stimulated cells were treated with 1 μM, 5 μM, 10 μM and 20 μM of nicotinic acid, lauric acid or kaempferol for 24 h, respectively. Real time RT-PCR was carried out to analyze the expression of the genes. Relative ABCA1 mRNA levels were normalized to beta-actin and their relative expression to untreated cells was analyzed using delta-delta CT method. Here we show that ABCA1 mRNA levels were significantly suppressed by 20 ng/ml of TNF-α, but all three antioxidants were able to antagonize this suppressive effect of TNF-α. High doses (20 μM) of the antioxidants significantly up-regulated the ABCA1 gene expression. This study successfully profiled that all the three antioxidants were able to alleviate the downregulatory effect of TNF-α on ABCA1 transcript level in HepG2 cells. Although stimulation with kaempferol alone induced ABCA1 expression to high levels, its ability to reduce TNF-α inhibitory response was the weakest amongst the three antioxidants.

The high density lipoproteins (HDLs) are major carriers of cholesterol in the blood stream and it has a protective function against atherosclerotic coronary disease. Besides, it is involved in the process of reverse cholesterol transport (RCT) to regulate cholesterol homeostasis [1]. ATP-binding cassette transporters, ABCA1 and ABCG1, are cell surface transporters that mediate the reverse cholesterol transport (RCT), a process that delivers cholesterol from the peripheral tissue back to the liver for disposal [2]. On the other hand, foam cell homeostasis is regulated by the RCT pathway. ABCA1, a target gene of liver X receptor (LXR), mediates the rate-controlling step in HDL synthesis by increasing cellular efflux of phospholipids and cholesterol to apo A-I containing lipoproteins, and thus plays a protective role in preventing atherosclerosis [3]. ABCA1 and ABCG1 are highly expressed in hepatocytes, which are the major source of circulating plasma HDL [4] and the control of ABCA1 and ABCG1 expression of transcriptional regulatory networks in lipid metabolism is relevant to the development atherosclerosis. In fact, the mutation of ABCA1 leads to the development of Tangier disease, which is characterized by the accumulation of cholesterol ester in reticuloendothelial cell, low serum HDL and increased risk of coronary heart disease [5].

Nicotinic acid, also known as niacin, is a type of Vitamin B3 which occurs naturally in food such as dairy product and legume. Nicotinic acid is important for cell respiration and metabolism of carbohydrate, fat and protein. Furthermore, it is used to treat high levels of cholesterol and triglycerides in the blood in order to improve the blood cholesterol profile [6].

Lauric acid is a natural saturated fatty acid (SAFA) with 12 carbon atom chain made from plants as an energy reserve. It is a component of triglycerides and make up consist half of the fatty acid content in coconut oil, laurel oil and palm kernel oil. It is claimed to have antimicrobial properties [13]. However, SAFAs have been associated with deleterious effect in atherosclerosis as it reduced triacyglycerols (TAG) levels, low density lipoprotein cholesterol (LDL-C) and total cholesterol [14].

As a multifunctional cytokine, TNF-α plays important roles in apoptosis, cell survival, inflammation and immunity. The main function of TNF-α is to induce inflammation via up-regulation of gene transcription through NF-κB signaling pathway [18,19]. At the same time, it could decrease HDL cholesterol levels by attenuating the basolateral efflux of cholesterol to apo A-I and ABCA1 promoter activity which would decrease the expression of ABCA1 [3]. Besides, the production of TNF-α also activates macrophage foam cells which would lead to the maintenance and progression of atherogenesis [2].

It was therefore hypothesized that the antioxidants would alleviate the inhibitory response elicited by the cytokine TNF-α, which has been proven to inhibit the expression of the genes [1,3]. Due to lack of evidences in this aspect, this study was designed to investigate the effects of different concentrations of the antioxidants on either alleviating or amplifying the TNF-α inhibitory response on ABCA1 mRNA expression.

HepG2 cells were grown until they reached 60-70% confluence in 25 cm2 tissue culture flasks. The medium was discarded and the cells were washed twice with PBS. All flasks were pre-treated with MEM (Gibco, USA) and 0.5% of FBS (Gibco, USA) for 2 h prior to the addition of cytokine. To confirm the effect of TNF-α on the ABCA1 mRNA expression, 20 ng/ml of TNF-α (Chemicon, USA) was added into pretreated tissue cultures and the cells were incubated in the 5% (v/v) CO2 incubator (Binder, Germany) at 37°C for 24 h. Different concentrations of nicotinic acid (1 μM, 5 μM, 10 μM and 20 μM) were then added to the 24-h-cytokine-treated-sample.

As for the untreated sample, the cells were supplemented with fresh MEM and 0.5% (v/v) FBS only without the presence of TNF-α. Another control sample was treated with 20 μM nicotinic acid alone. All cells were then incubated in the 5% (v/v) CO2 incubator at 37°C for 24 h. The experiments were repeated by replacing different concentrations of nicotinic acid with lauric acid or kaempferol. Total cellular RNA of the cell samples were then extracted by using Tri Reagent ® LS (Molecular Research Center, USA) according to the manufacturer’s instruction.

The samples were placed in Bio-Rad’s MyiQ™ Single- Color Real-Time PCR Detection System for quantitative PCR (qPCR), following a program, which consisted of 1 cycle each of 50 °C (for cDNA synthesis) for 10 min and 95 °C for another 3 min, followed by a 35 cycles of denaturing at 94 °C for 10 s, annealing at 60 °C for 30 s and primer extension at 72 °C for 30 s, before a melt curve analysis was carried out at the end of the qPCR cycle.

Normalization against housekeeping gene β-actin was performed in order to determine the relative mRNA expression of the target gene using delta-delta CT method and the calculated expression of ABCA1 mRNA was presented in fold-changes as compared to untreated control (fold-value equals to 1.00). Each experiment was performed in triplicates.

Results were presented as means and standard deviations of triplicate determinations. Experimental groups were compared by using the SPSS Statistics Standard software, version 16.0 (IBM, USA). Oneway ANOVA was used for all analysis using the LSD algorithm at a 95% confidence interval. Differences were considered statistically significant at the p < 0.05 level. 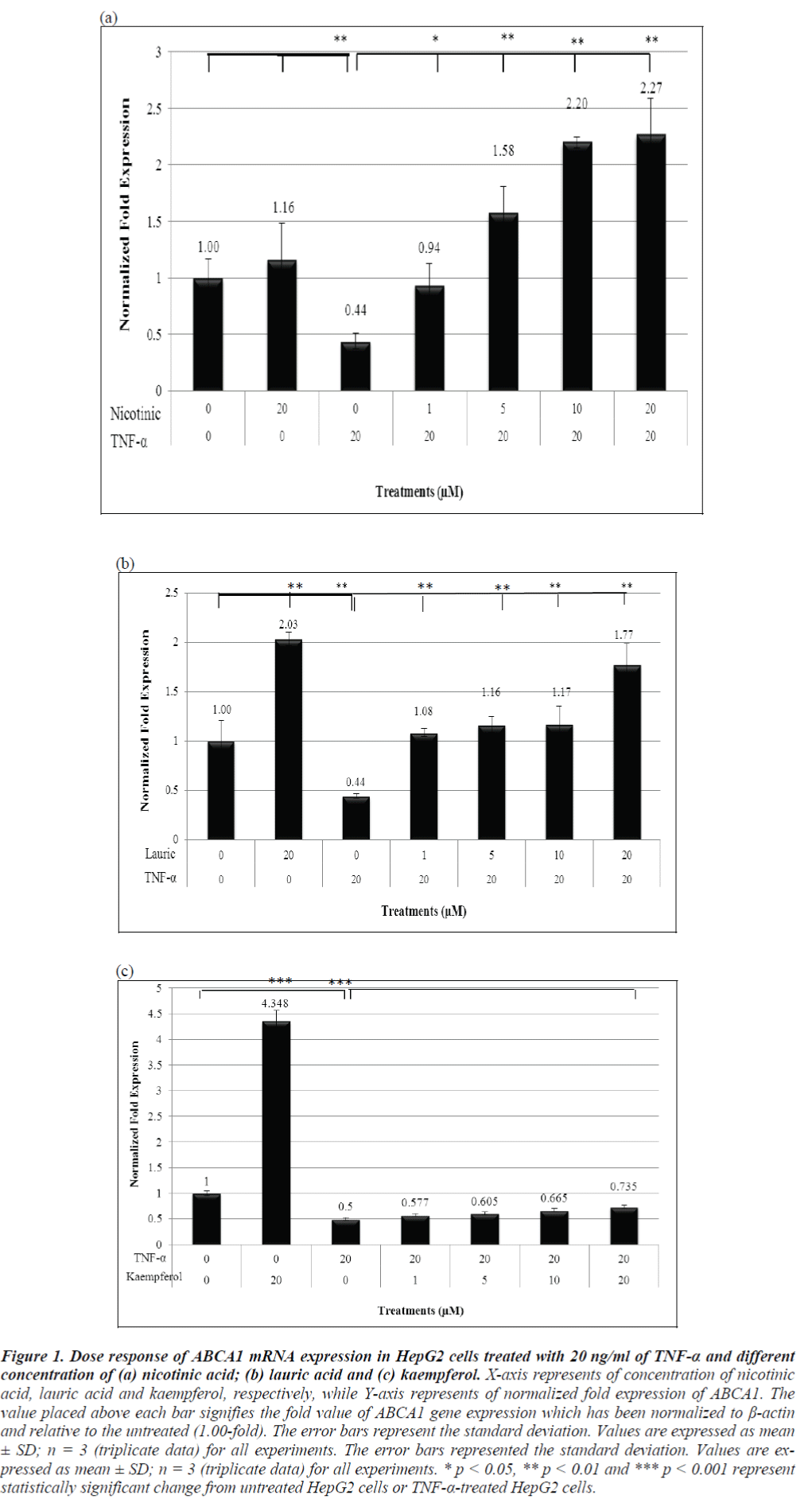 Kaempferol alone significantly induced ABCA1 expression to approximately 4.348-fold. Comparing the three antioxidants, all were able to alleviate the repression by TNF-α, but kaempferol had the weakest effect amongst the three.

Nicotinic acid was shown to increase PPAR-γ transcriptional activity through the activation of PPAR-γ-LXR-α- ABCA1 pathway [9,26-28]. Meanwhile, the PPAR-α response element has been identified in LXR promoter, suggesting that PPAR-α is involved indirectly in the regulation of ABCA1 transcription activity through LXR pathway [29,30]. Therefore, up-regulation of PPAR-α would indirectly increase the ABCA1 expression and further elevate in HDL formation [31]. Nicotinic acid has been proven to increase apoA-I levels in HepG2 cells [32]. ApoA-I activates cellular cAMP signaling through ABCA1 transporter, which in turn stimulates ABCA1 phosphorylation and its expression [33].

Lauric acid could increase the LXR-α, which acts as a positive regulator for ABCA1 expression [34,35]. Lauric acid may up-regulate LXR, and this leads to the decrease in sterol regulatory element-binding protein (SREBP2), which binds to the E-box in the ABCA1 promoter. The inactivation of SREBP2 and stimulation of LXR have been shown to synergistically induce ABCA1 expression [36]. Aside from that, it is also hypothesized that lauric acid may activate PPAR-α nuclear receptor and PPAR-γ agonists, which further enhanced the ABCA1 mRNA expression in a PPAR-dependent manner through LXR activation [37]. However, more studies have to be carried out to confirm the actual mechanisms triggered by lauric acid.

Kaempferol is a natural product found abundantly in green tea, wine, vegetable and fruits. It has anti-oxidant and anti-inflammatory effects. Its effects were proven when ABCA1 mRNA expression pattern showed gradual increase in a given constant dose of TNF-α together with increased doses of kaempferol in this study. Similar scenario was also observed in our previous study with LXR-α [38]. Kaempferol has been shown to downregulate TNF-α production by interfering IκB kinase (IKK) and mitogen activated protein kinase (MAPK) to inhibit NF-κB in NF-κB pathway [39,40]. However, under the inflammatory state caused by the TNF-α stimulation, kaempferol failed to alleviate the ABCA1 expression back to untreated levels, although there was an alleviation in the expression levels. ABCA1 mRNA expression was up-regulated significantly with high dose of kaempferol alone. This shows a positive relationship between ABCA1 and kaempferol which suggests that kaempferol may be more suitable as a preventive substance which would benefit the host organism.

In summary, nicotinic acid, lauric acid and kaempferol have positive impacts on ABCA1 gene expression in the TNF-α stimulated HepG2 cells. The up-regulation of the gene is critical in maintaining cholesterol homeostasis and preventing cardiovascular disease. Thus, the induction in expression of the target genes may be a desirable antiatherogenic therapeutic approach.

The authors thank Dr. Ha Sie Tong for his contribution of lauric acid for the study. This work was supported by Department of Biomedical Science (UTAR) and some of the consumables used in this study were supported by UTARRF (Project Number IPSR/RMC/UTARRF/C2- 11/C04; Vote Number 6200/C45).