Pelizaeus-Merzbacher disease (PMD; MIM #312080) is a rare X-linked recessive disorder characterized with early nystagmus, hypotonia, ataxia and neurodegeneration. PMD is caused by mutations in PLP1 gene that encodes for the myelin protein Proteolipid Protein 1 (PLP1) and the spliced variant DM20. Generally, patients with PLP1 missense mutations show the most severe form of PMD (connatal form), whereas PLP1 duplications, that are the most common mutations result in the classical PMD. Deletions and null mutations are associated to the mild form of PMD and Hereditary Spastic Paraplegia type 2 (SPG2). The present paper shows a boy of 17-year-old with clinical diagnosis of PMD in which we found a novel PLP1 deletion using Next Generation Sequencing (NGS). Clinical exome sequencing was performed on the affected proband as well as his mother. Libraries were generated according to manufacturer’s protocols using TruSight One kits (Illumina Inc., San Diego, CA, USA) and carried out on NEXT Seq 500 (Illumina Inc., San Diego, CA, USA) to mean sequencing depth of at least 100x. Sequencing results suggested of a complete or partial deletion of PLP1 gene. MLPA (Multiplex Ligation-dependent Probe Amplification) analysis confirmed a deletion in exon 6 of PLP1 inherited from asymptomatic carrier mother. In conclusions, although the patient we described had a severe but stable phenotype, even if he present a deletion in PLP1, suggesting that also deletions give rise to variable phentotypes of PMD. This report also extends the spectrum of PLP1 mutations and highlights the diagnostic utility of NGS to investigate complex clinical phenotypes.

Next-Generation sequencing has been increasingly implemented in clinical diagnostics and has rapidly become a well-established technology In addition to whole genome/exome sequencing, large gene panels of clinically associated genes are used as high-throughput sequencing tests in many clinical centers [1,2]. A diagnostic yields based on some disease-specific study groups may be significantly higher than overall diagnostic yields of a large unselected diagnostic cohort [3].

Pelizaeus–Merzbacher disease (PMD MIM 312080) is a rare dysmyelinating X-linked disorder affecting the central nervous system, with lesions in the cerebral and spinal cord white matter. Most clinical findings are hypotonia, nystagmus and delayed development of motor skills already present in the early childhood [4]. The clinical spectrum ranges from severe connatal cases to relatively benign adult forms [5]. PMD usually concern mutations in the Xq21-22 locus of the PLP1 (MIM# 300401) gene that encodes the main component of myelin in the Central Nervous System (CNS), a four-pass transmembrane protein called proteolipid protein 1 (PLP1) [6]. It seems that abnormal PLP1 impairs protein trafficking and induce apoptosis in oligodendroglia. Consequently PLP1 deficiency is related to an insufficient generation of myelin sheaths with the remaining proteins [5]. In literature different types of PLP1 mutations are reported, such as duplication (60-70%), missense mutation/point mutations (15-20%), insertions and deletions [2,7]. We herein report a case of a young patient with clinical diagnosis of PMD in which we found a novel PLP1 mutation, exon 6 deletion, through a combination of NGS and MLPA analyses.

Genomic DNA was isolated from blood samples of the parents the proband, proband’s aunt, and of amniotic fluid using the QIAamp DNA blood Mini Kit (QIAGEN) following the manufacturer’s protocol.

Clinical Exome Sequencing (ES) was carried out on the affected proband as well as his mother and amniotic fluid. Libraries were generated according to manufacturer’s protocols using TruSight One kits (Illumina Inc., San Diego, CA, USA). Sequencing was carried out on NEXT Seq 500 (Illumina Inc., San Diego, CA, USA) to mean sequencing depth of at least 100x. Exome data processing, variant calling, and variant annotation were performed as described in Supplementary materials and methods. We only selected variants affecting coding exons or canonical splice sites. Subsequently, synonymous variants were filtered out, and only rare variants (frequency of <0.1% in both dbSNP138 and our in-house database containing >1,000 exomes) with high quality were reported.

PLP1 dosage analysis was performed in the proband, his parents, his aunt (twin sister of proband’s mother) and amniotic fluid by Multiple Ligation-dependent Probe Amplification reaction (MLPA). The test used SALSA P022 B2 (MRC-Holland), containing probes covering all PLP1 exons and 20 control probes located on the flanking regions of PLP1 gene on the X chromosome. Reactions were performed according to the manufacturer’s recommendations (100 ng of DNA/reaction, hybridization time 16 h and 35 PCR cycles). Reaction products were separated with 3130 Genetic Analyzer (Applied Biosystems). The analysis was performed using Coffalyser. NET software (by MRC-Holland) (standard parameters, dosage ratio boundaries <0.75 and >1.25 for deletion and duplication respectively).

All coding exons and exon–intron boundaries of PLP1 were amplified using primers designed with Primer3web version 4.1.0. Primers sequences are available on request. The genomic sequence from GenBank accession numbers NM_001128834 was used as reference sequence. The amplified products were isolated by electrophoresis on 1% agarose gel and purified using the QIAamp purification kit (Qiagen, Valencia, CA).

We report a case of 17-year-old male, born at term after an uneventful pregnancy from healthy, unrelated parents, in the absence of a family history of neurological illness (Figure 1A). Body weight at birth was 2750 g. Since the first months of life, the child was hypotonic and unable to maintain the head upright; he presented spontaneous nystagmus in all directions and microcephaly. Towards the end of the first year of life, he showed global psychomotor delay, generalized hypotonia and muscle hypotrophy, peripheral limb hypertonia and spontaneous nystagmus. During this period the diagnosis of PMD was suspected, but molecular analysis performed with classical methods excluded PLP1 duplication. At the age of 4 years, decreased motor conduction velocity with small compound muscle action potential amplitude suggested a sensorimotor polyneuropathy. A showed-down electric activity on frontal areas bilaterally was detected byEEG in sleep. A brain MRI showed supratentorial, symmetrical abnormal white matter with hyperintensity in T2-weighted images, thus suggesting demyelination. EMG showed myogenic changes and also visual evoked potentials were altered. The patient also performed muscle biopsy showing congenital muscular dystrophy. Metabolic tests were normal. At age of 14 years, the patient was severely unable to swallow due to the paucity of tongue movements, , as shown by an X-ray. One year later an eye examination showed visual impairment. Brain and cord MRI displayed demyelination in the left white matter with hyperintensity in T2-weighted images, severe scoliosis and thinning of the spinal cord (Figure 1B). An sleep EEG showed isolated spikes on the right occipital areas. Currently, the boy is affected by severe intellectual disability, spastic quadriplegia, aphasia, irregular sleep-wake cycle that has benefited from low daily doses of periciazine. 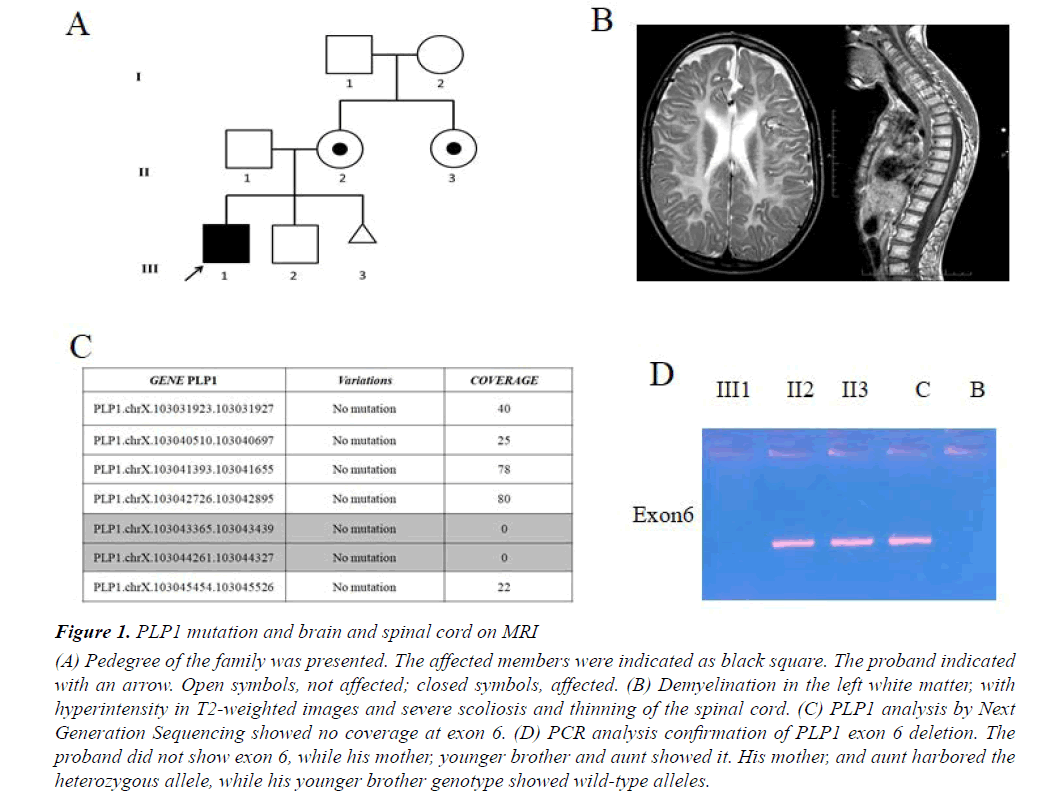 Figure 1: PLP1 mutation and brain and spinal cord on MRI
(A) Pedegree of the family was presented. The affected members were indicated as black square. The proband indicated with an arrow. Open symbols, not affected; closed symbols, affected. (B) Demyelination in the left white matter, with hyperintensity in T2-weighted images and severe scoliosis and thinning of the spinal cord. (C) PLP1 analysis by Next Generation Sequencing showed no coverage at exon 6. (D) PCR analysis confirmation of PLP1 exon 6 deletion. The proband did not show exon 6, while his mother, younger brother and aunt showed it. His mother, and aunt harbored the heterozygous allele, while his younger brother genotype showed wild-type alleles.

Starting from aprevious molecular diagnosis which ruled out PLP1 duplication we performed clinical Exome Sequencing (ES) in order to investigate point mutations in PLP1 as well as variations in other associated PDM genes or possible candidate genes. Sequencing analysis on the proband and amniotic fluid not revealed a pathogenic mutation in PLP1 as well as in the other genes causing the other forms of hypomyelinating leukodystrophy of PMD. However in our patient a proportion of PLP1 gene showed sequencing depth of 0 (Figure 1C). We confirmed a deletion in exon 6 in hemizygous state of PLP1 gene by MLPA analysis. According to MLPA, the subject had a diagnostic index equal to 0 for exon 6 inherited from asymptomatic carrier mother (Figure 1A). PCR analysis of PLP1 gene confirmed the deletion of exon 6 only in the proband as shown in Figure 1D. We also found the same deletion in his aunt in heterozygous state, whereas no mutation was found in his father and his younger brother (Figure 1A). Finally, molecular analysis performed on amniotic fluid did not reveal the same deletion (Figure 1A).

Different PLP1 mutations give rise to clinical phenotype of PMD ranging from most severe connatal form, with nystagmus, seizures and sever motor deficits, and death which occur during the infancy, to relatively mild SPG2 and PLP1 null syndrome associated to peripheral neuropathy [8].

PLP1 gene duplications are the most frequent mutation in PMD (60-70%) and generally results in the classical form of the disease [6,9,10]. In the 15-20% of patients point mutations, including missense, nonsense, and splicing have been detected, while null mutations are rare [11-14]. Also insertions [15], deletions [16] and translocations [17] have been described as responsible for PMD. In general, missense mutations results to more severe forms of the disease, deletions and null mutations to mild PMD and SPG2, whereas the most common variations, duplications, result in the classical-intermediate form of PMD. In this study, we described a PMD patient with a novel mutation in PLP1 gene, which cause a deletion of entire exon 6. To date, this mutation has not been reported in any of the publicly databases (ExAC, ESP, 1000G) or in literature. The child showed hypotonia with failure to keep the head straight, nystagmus and microcephaly. Later he showed progressive psychomotor delay, muscle hypotrophy and peripheral limb hypertonia up to a severe intellectual disability, spastic quadriplegia, aphasia and irregular sleep-wake cycle.

Complete PLP1 gene deletions are very rare (approximately 2% of patients) and only few studies described clinical and molecular characterization of these patients [17,18]. The first report described a fourgeneration family with two living affected male with a deletion of PLP1 gene encompassing the promoter region, the entire coding region, and the 3' untranslated region spanning at least 29 kb of genomic DNA [18]. Additional cases with complete or partial PLP1 deletion clarified the possible molecular mechanisms underlying these genomic rearrangement as well as brain MRI findings [16,19-21]. Up to now few affected females with X-linked PMD have been described with the development of neurodegenerative symptoms later in life [22-24]. Brender et al. described the first affected female with a PLP1 deletion and a severe but stable phenotype, probably due a second event of skewed X chromosome inactivation [25]. Only one case of a 5-year-old boy with a milder form of PMD and a PLP1 point deletion was described [26]. According to genotype-phenotype studies reported in literature a milder form of PMD developed from deletions of PLP1. Because the majority of PLP1 point mutations cause more severe dysmyelinating diseases than null mutations, Inoue speculated that at the PLP1 locus dominant-negative and loss-of-function alleles may result in different pathogenesis with distinct phenotypic consequences [16]. Although the patient we described showed a severe but stable phenotype, he present a exon 6 deletion in PLP1, confirming the variability in clinical expression of PMD and extending the knowledge of genotype-phenotype correlation. Since PLP1 deletions have been usually associated with milder form of PMD, we hypothised that possible modifier genes exist or other genetic mechanisms involved in etiopathogenesis of PMD could occur. Furthermore our patient in which we found a novel PLP1 deletion by NGS highlights the diagnostic utility of this technique to investigate PLP1 deletion as well as point mutations.

The authors thank the patient and his family for cooperation and support in this study. AMES Polidiagnostic Instrumental Centre supported this work within the research project: “Autismo: tra genetica ed Epigenetica”.