Rhinosinusitis is a common medical condition which involves the nasal cavity and paranasal sinuses. It affects about 6%-12% of general population. The initial surgical step in endoscopic sinus surgery is that to perform uncinectomy which is either by using a sickle knife or backbiting forceps then we should identify the maxillary natural ostium to proceed into middle meatus antrostomy [1-3]. 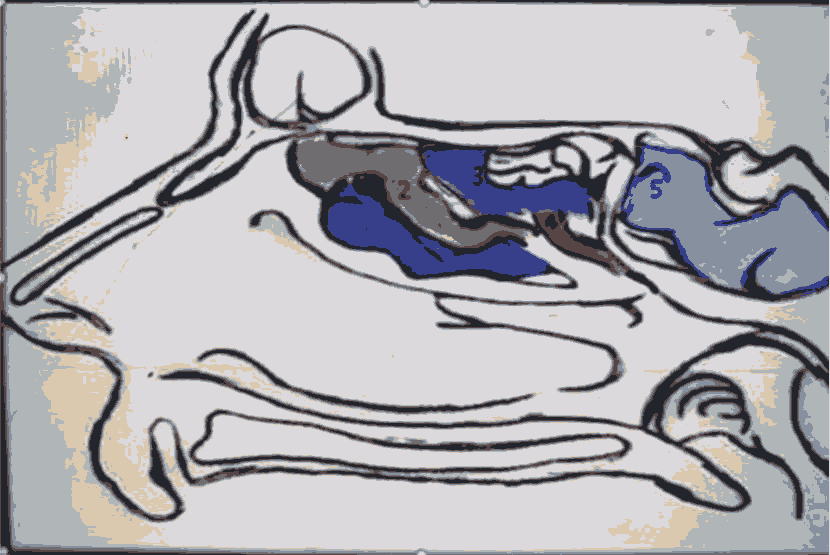 The UP is a hook like structure which is directed antero-superiorly to postero-inferiorly and it has the following anatomical attachments.

•Posteroinferiorly to the ethmoid process of the inferior turbinate.

•Antero-superiorly to the lamina papyracea, skull base, or Middle Turbinate (MT).

•Laterally to the lamina papyracea and fontanelle area as shown in Figure 2 [6]. 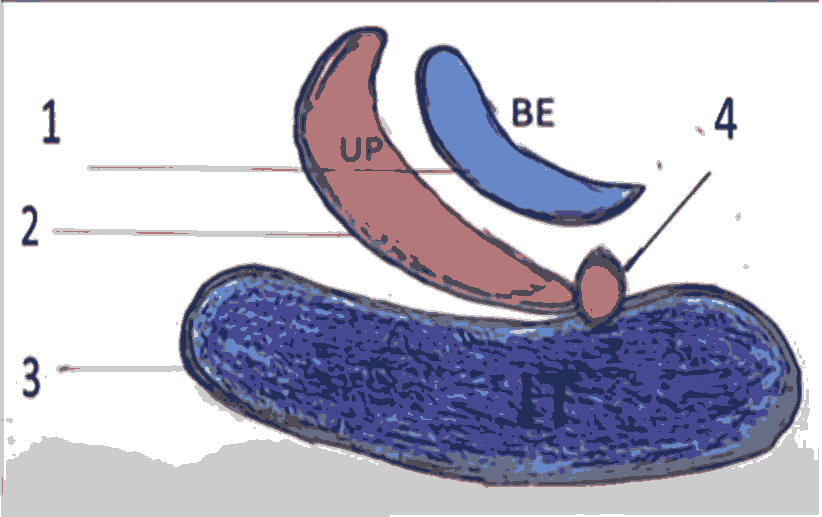 Furthermore, the superior insertion of UP according to classification introduced by Landsber and Friedman:

Type 1: Insertion to the lamina papyracea.

Type 2: Insertion into the posterior wall of the agger nasi cell.

Type 3: Insertion into the lamina papyracea and junction of the middle turbinate with the cribriform plate.

Type 4: Insertion to the junction of the middle turbinate with the cribriform plate.

Type 5: Insertion into the skull base.

Type 6: Insertion into the middle turbinate [7]. 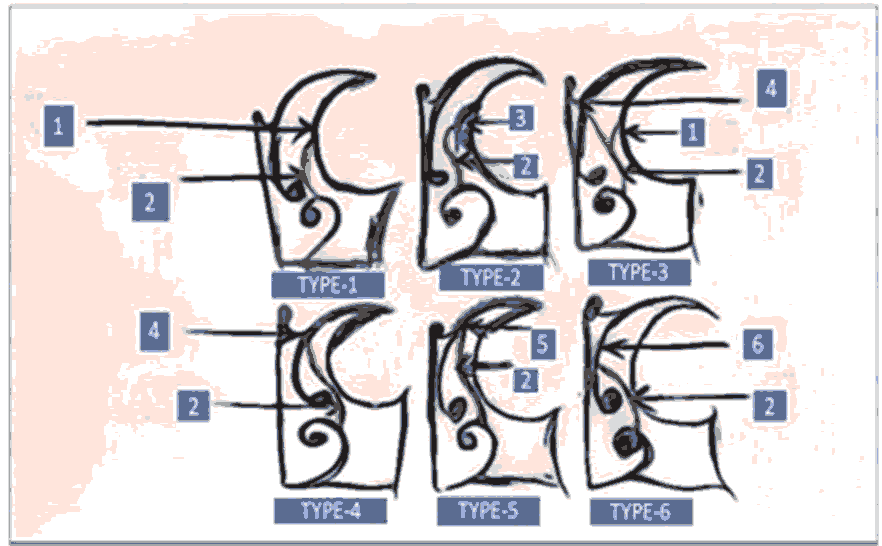 In addition, we have to remember that the challenges during endoscopic uncinectomy in patient suffering from silent sinus syndrome which is characterized by unilateral enophthalmus, ipsilateral orbital floor retraction and superior orbital sulcus is deepening as shown in Figure 4 [8]. 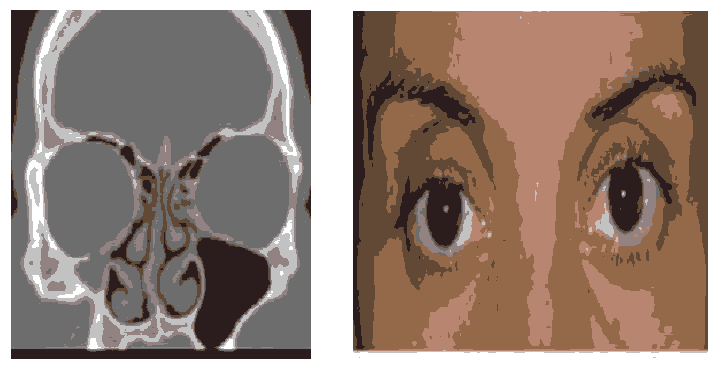 The endoscopic sinus surgery begins with uncinectomy to continue with middle meatus antrostomy which either by sickle knife which is inserted in the soft attached end of the UP in the lateral wall of the nose then by using Zurich scissors (from Karl storz, nasal scissors, Zurich model) we can cut the inferior and superior ends of the UP and it can be removed by Blakesely forceps. This technique has some risk of lamina papyrecea injury (2%), ethmoidal sinus injury and missing of the natural maxillary sinus ostium while the other technique is swing door technique which is performed by using backbiting forceps after insertion of the forceps in the ethmoidal infundibulum and cut inferiorly and superiorly then remove the UP [9]. The last technique has also risk of nasolacrimal injury especially when there is a dehiscence of the nasolacrimal duct [10]. Alternatively, there are other options for uncinectomy such as using the shaver system or via Hajek punch forceps [11].

In this new approach we can perform the endoscopic uncinectomy in a retrograde manner by using special instrument which is invented to this purpose. The instrument has two ends, one end is a malleable ball tip seeker and the other end is a sharp malleable knife which is designed to cut the UP in its posterior surface as in Figure 5.

Figure 5. The instrument as mentioned has two ends.

According to Figure 5 the instrument as mentioned has two ends, the end which is labeled A referred to ball tip seeker for identification and medialisation of the UP while the other end which is labeled B referred to the knife for uncinectomy. Furthermore, these ends are malleable which can be adjusted according to the angle of insertion of UP to the lateral nasal wall.

This prospective study was conducted at Al-Basrah teaching hospital in corporation with Basrah medical college in period from January 2019 to January 2020 and it was approved by local ethical committee. A total number of 20 patients which was underwent primary endoscopic sinus surgery for chronic rhino sinusitis without nasal polyposis which did not respond to medical therapy.

The endoscopic sinus surgery was performed under GA (hypotensive anesthesia) with endotracheal intubation, the patient was comfortable with reverse trendelenburg position (head up) then put the nasal patties which was socked with 10000 adrenaline for 10 minutes before starting the procedure.

Initially, the 0 degree endoscope was introduced into one nostril after removal of nasal patties then identify the UP by direct inspection and by using the end A of the instrument in the Figure 5, in addition, the medialisation of the UP is an important step to recognize the full attachment of the UP to the lateral nasal wall as in Figure 6.

Figure 6. The medialisation of the UP is an important step to recognize the full attachment of the UP to the lateral nasal wall. Left nasal cavity. MT: Middle Turbinate, UP: Uncinate Process, IT: Inferior Turbinate. The first step is to identify the UP and insert the ball tip seeker to medialise the UP. 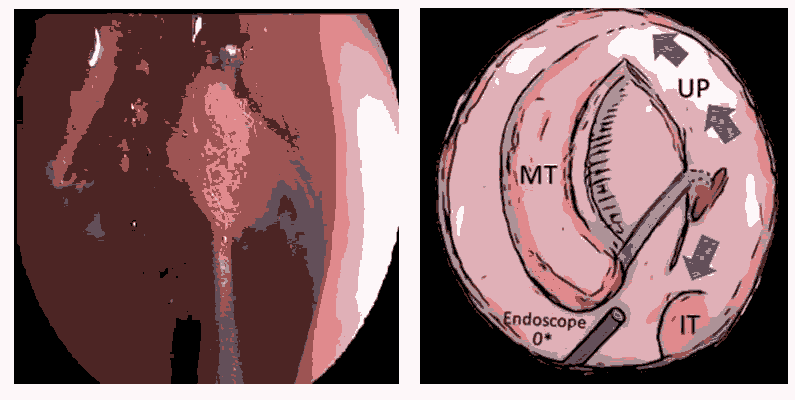 Figure 7. MT: Middle Turbinate, UP: Uncinate Process; IT: Inferior Turbinate. The first step is to identify the UP and insert the ball tip seeker to medialise the UP.

The second step is insertion of the end B of the instrument corresponds to the angle of insertion of the end A, in this way we can ensure our instrument in the same correct plane whatever the anatomical variation in attachment of UP to the lateral wall of the nose. Furthermore the tip of your instrument will be easily visible by direct telescope to this area because of illumination of the tip across the relative thin structure the UP. Ultimately, the cut end can proceed superiorly and inferiorly with safe cutting even you can see the cut end precisely without risk of orbital or nasolacrimal injury as in Figure 8. After that the superior and inferior ends of UP can be cut by Zurich scissors and remove the UP by Blakesely forceps.

Finally, the usual end results as in the Figure 9 immediately. 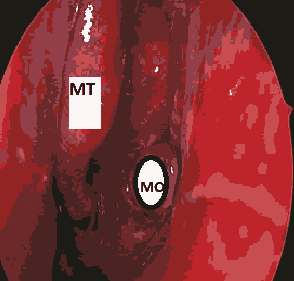 Figure 9. Superior and inferior ends of UP can be cut by Zurich scissors and remove the UP by Blakesely forceps. MT: Middle Turbinate; MO: Maxillary Ostium.

Firstly, we observed that during endoscopic middle meatus antrostomy, it needs perfect uncinectomy but even with more delicate surgery still there is some risk of penetration of lamina papyracea especially if the lamina papyracea has located more medially (type 2 Herzallah classification), in case of silent sinus syndrome, the uncinate process is retracted and the ethmoidal infundibulum is occluded with increasing the orbital volume, So the classic Stammberger sickle knife uncinectomy is still endanger the orbit, on the other hand the swing-door technique is a good way to deal with UP but it has two drawbacks, first the surgeon usually feel the tissue more than see the tip of his instrument (depends mainly on tactile sensation), the second point the surgeon should put in his mind the possibility of nasolacrimal dehiscence either congenital or by disease process (6.8%) so there is risk of NLD injury with subsequent epiphora postoperatively [14,11]. Finally, Rafidain technique is introduced for beginner will feel safer, and silent sinus syndrome will be best tool because we don’t use sickle knife or the back biter.

The stammberger and swing-door techniques were used widely but I feel rafidain technique can be considered as an additional or alternative surgical approach to endoscopic uncinectomy, especially for beginner and challenging lateral position of the uncinate process.