Introduction: Acute appendicitis (AA) may interfere many diseases and appendectomy is the most performed intra-abdominal operation in the world. Despite of the use of advanced technology diagnostic methods, it is not shown a decrease in perforation and negative appendectomy (NA) rates. The aim of this study is to identify the effect of neutrophil/lymphocyte ratio (NLR) in reducing the NA.

Methods: 341 patients who have operated with initial diagnosis of AA in a tertiary care hospital between 01.01-31.12.2014 were included in this study. The patients who had taking antibiotics before admission, trauma or cancer history, pregnancy and under age of 17 were excluded. Histopathologic reports of 318 patients who met criteria’s were evaluated and the patients divided into 3 groups in terms of histopathologic reports as non-AA (group 1), AA (group 2) and complicated appendicitis (group3). NLR values were compared between groups.

Conclusion: AA is one of the most frequent emergency surgical problems of the patients with abdominal pain. Timely and accurate diagnosis is essential, on the other hand high NA rates are continuing an important problem so simple, fast and reliable tests are necessary to definitive diagnosis. As a result of our study, we found out that preoperative NLR is a valuable data for this purpose. We hope that our study may contribute to developing new protocols for definitive diagnosis in emergency department.

Acute appendicitis (AA) is one of the most common causes of acute abdomen [1,2]. The lifetime occurrence of this disease is 7% [3] with perforation rates of 17-20% [4]. Mortality risk is less than 1% in the general population but this number can rise to 50% among the elderly population [5]. This entity has some well-known signs and symptoms like increased leukocyte count and right lower quadrant pain. However, these predictors are not constant and their accuracy is questionable. Many authors have reported that a raised leukocyte count is a sensitive test for AA but is not diagnostic because of its low sensitivity [6].

At the present time, there is no diagnostic tool providing an accurate diagnosis in AA preoperatively. So that studies are continuing to find a diagnostic tool that is independent from practitioners, non-invasive, inexpensive and can be used in daily practice.

This cross sectional study was conducted at Ataturk Research and Training Hospital Emergency Department (ED), Izmir, Turkey. This governmental tertiary care hospital has a capacity of 1100 beds and daily number of application to ED is about 700 patients. In this study, the patients having gone appendectomy included between January 2014 and December 2014 for a year. After approval from the ethics committee of Katip Çelebi University Faculty of Medicine, Turkey, data pertaining to patients aged at least 17 years who had presented to the ED with abdominal pain and had undergone appendectomy was studied. We retrospectively reviewed a database of 341 patients who had undergone open appendectomy for a preoperative diagnosis of AA. Exclusion criteria’s were under age of 17, pregnancy, trauma history, taking antibiotics before hospital admission, cancer history and no histopathology and laboratory results in medical record 23 of 341 patients were excluded.

The data analysis was performed using the Statistical Package for the Social Sciences for Windows, version 22.0 (SPSS Inc, Chicago, IL, USA). The differences between groups were compared by using Mann-Whitney U-test and Kruskall Wallis H test where appropriate. Data were shown as mean ± standard deviation or median (min-max), where applicable. The cut-off values of parameters for discrimination of the groups were determined using the receiver operating characteristic (ROC) analysis. At each value, the sensitivity and specificity for each outcome under study were plotted, thus generating an ROC curve. A p value less than 0.05 was considered statistically significant. 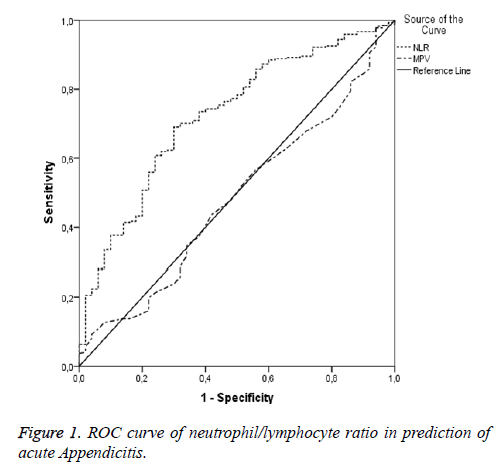 Table 2: The mean NLR values of the patients in terms of the histopathologic diagnosis.

AA is one of the most frequent emergency surgical problems of the patients with abdominal pain and still is the most operated group by surgeons. The incidence of AA ranges from 6.7% to 20% throughout the life. İt is determined that AA was seen in young adults (most likely 2. and 3. decades) and in males in many studies from literature [12-14]. In a prospective study performed by Anielski et al., the mean age was determined 36 ± 17 in patients interned with initial diagnosis of AA [15]. In our study, the mean ages of males were 33.59 ± 13 and females were 32.8 ± 13.25 and these results were compatible with literature. There were no statistically significant differences between genders in terms of age.

At the present time, there is no a diagnostic method for the diagnosis of AA preoperatively so that researchers bias to investigate radiological imaging techniques, inflammatory tests, scoring methods and invasive attempts like laparoscopy. NLR studied in our study seem to be practical because of it is non-invasive, easy applicable and obtained from blood samples. Many studies performed to rapid and accurate diagnosis of AA. It is sought that other parameters than total number of leukocytes because of not seem to be reliable sufficiently. Recently, it is emphasised that NLR is a better identifier than alone CRP, leukocyte and neutrophil [9,10]. NLR was studied firstly in 1995 by Goodman et al. to diagnosis of AA. NLR value determined above 3.5 in 324 patients diagnosed AA and this number was statistically significant also it is concluded that NLR was more sensitive that total leukocyte count [9]. Similar studies evaluated NLR are available and similar results have been found [11,23-26].

In our study, cut off value of 4.659 of NLR seems to be a reliable parameter to diagnose exactly on the other hand normal NLR values do not rule out the diagnosis of AA. Our cut off NLR value can differentiate normal appendix and inflamed appendix statistically significantly however this value is higher than some values determined in previous studies [9,11] on contrary lower than the cut off value determined by Ishizuka et al. [26]. There are many studies on this issue and determined different cut off values but all of them showed that NLR had diagnostic advantage than traditionally laboratory tests like alone WBC or alone CRP whereat it is reported that NLR value is an independent indicator to diagnose AA [10].

As a result, NLR seems to be a better parameter than total leukocyte count. NLR cut off value of 4.659 may be used as a diagnostic parameter for AA in this wise negative appendectomy rates can be reduced. Because of all these reasons we suggest that use of NLR as a reliable diagnostic test for diagnosis of AA in adults.

AA is one of the most frequent emergency surgical problems of the patients with abdominal pain. Timely and accurate diagnosis is essential, on the other hand high negative appendectomy rates are continuing an important problem so simple, fast and reliable tests are necessary to definitive diagnosis. As a result of our study, we found out that preoperative NLR with a cut-off value 4.659 is a valuable data for this purpose. We hope that our study may contribute to developing new protocols for definitive diagnosis in ED.

This study was not needed to be supported financially.