Neurofibromatosis and type-1 diabetes in a seven-year-old child: A rare combination.

Neurofibromatosis type 1 (NF1) is a multisystem disease of autosomal dominant inheritance, with an incidence of 1 in 3000 people worldwide [1]. It consists of cutaneous findings, most notably café-au-lait spots and axillary freckling, skeletal dysplasia, and the growth of benign and malignant neural crest tumors, and most commonly benign neurofibromas [1]. It occurs due to genetic mutation on the NF1 gene in chromosome 17q11.2 that codes for a tumor suppressor protein called neurofibromin. However, very occasionally, NF1 is also associated with other autoimmune diseases including systemic lupus erythematosus, autoimmune thyroiditis, vitiligo, IgA nephropathy, multiple sclerosis, and an exceedingly rare association with diabetes mellitus type 1 [2,3]. In addition to autoimmune disease association, neurofibromatosis could also manifest in rare neuroendocrine tumors like somatostatinomas and insulinomas [4]. To the best of our knowledge, only two patients have been reported to have both NF1 and type 1 diabetes mellitus until now [4,5].

The United Nations regards diabetes as the most common chronic metabolic disease diagnosed in children and adolescents [6]. Developing countries have reported the highest rate of incidence of type 1 diabetes in children worldwide, and it has increased from 3% to 5% since the 1960s [7]. We report a rare case of co-existing NF1 and type 1 diabetes mellitus in a 7-year-old child.

A 7-year-old Yemeni girl presented to our hospital with an episode of diabetic ketoacidosis that presented with vomiting and abdominal pain and was resolved with the appropriate treatment. She had been diagnosed with NF1 at birth based on the presence of multiple painless cafe au lait spots (measuring 1-7 mm) as well as axillary and inguinal freckles. She was diagnosed with type 1 diabetes mellitus at 2 months of age. She has been on treatment with insulin isophane and soluble insulin for her diabetes since then; her current treatment regime is insulin glargine. She has no complications such as retinopathy, nephropathy, or neuropathy. None of her relatives had either condition, despite the relative consanguinity between her father and the mother. She did not have neurofibroma, plexiform neurofibroma, optic nerve glioma, long bone abnormalities, hearing loss, visual deficit, or balance problems. Her development matched her chronological age with respect to gross motor, fine motor, visual, speech, and social skills.

On examination, her vitals were stable. Her growth parameters were as follows: weight, 10 kg and height, 100 cm (Figure 1). She had multiple cafe au lait spots, one large melanocytic nevus over her left arm and one on her right hypochondriac side, along with freckles spread all over the trunk and back (Figure 2) including both her legs and axillary area (Figure 3). The patient was fully oriented and had normal reflexes, cranial nerve, cerebellar, motor, and sensory nerve function. The baseline ophthalmological evaluation showed that 2 Lisch nodules were present in each eye (Figure 4); however, the normal optic disc, macula, and retinal blood vessels were normal and her vision was 20/20. The results of the investigations are shown in Table 1. The MRI findings were unremarkable and showed no tumors (Figure 5). At present, the patient's diabetes is well controlled and no modifications have been made in her treatment regime. She is following up regularly. 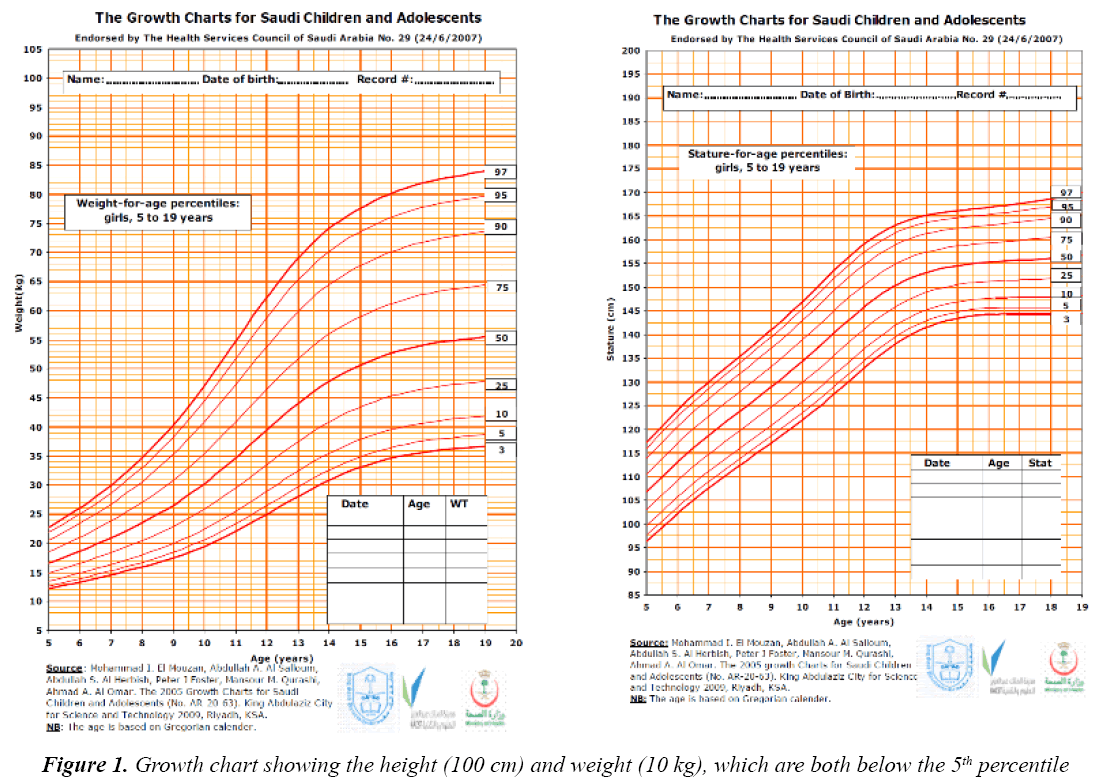 Figure 1: Growth chart showing the height (100 cm) and weight (10 kg), which are both below the 5th percentile 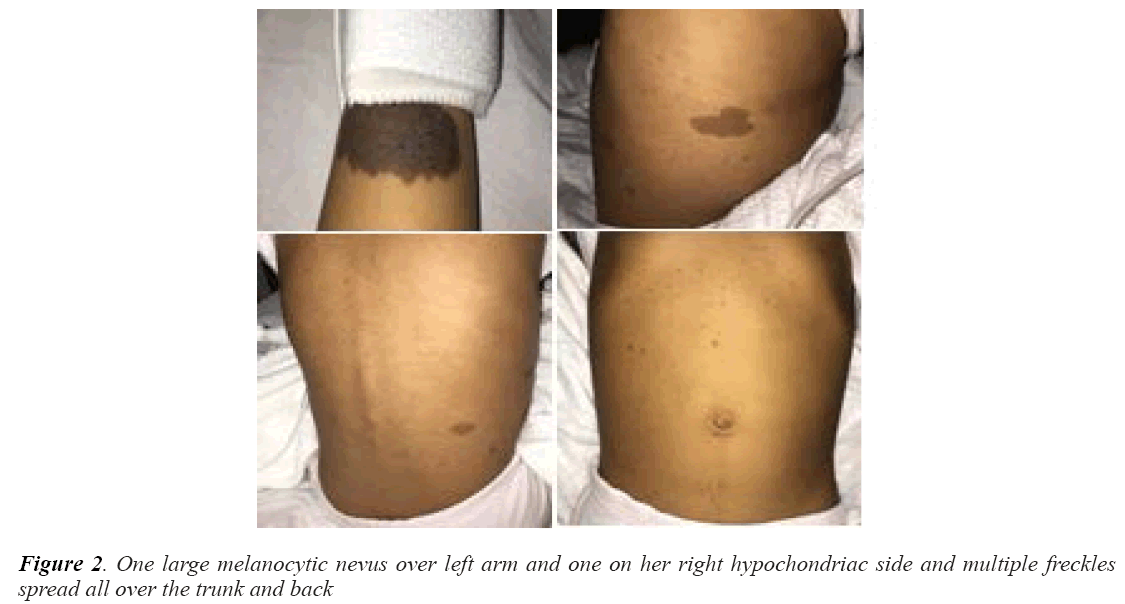 Figure 2: One large melanocytic nevus over left arm and one on her right hypochondriac side and multiple freckles spread all over the trunk and back 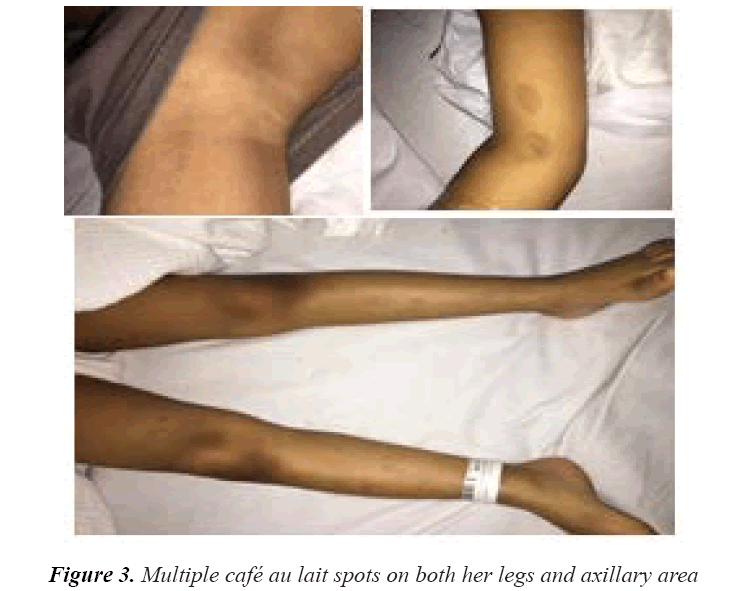 Figure 3: Multiple café au lait spots on both her legs and axillary area 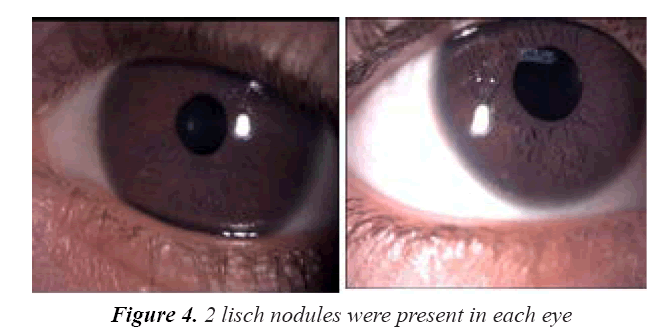 Figure 4: 2 lisch nodules were present in each eye

NF1, previously called von Recklinghausen’s disease, is a common autosomal dominant inherited disease with a reported incidence of 1 in 3000 people worldwide [1]. It is a genetic germ-line–inactivating mutation on the Nf1 gene in chromosome 17q11.2 that codes for neurofibromin, which acts as a tumor suppressor protein [8]. This usually explains why there is an increased susceptibility to neoplasms of neural crest origin, including the neurofibromas [9]. Neurofibromin also suppresses the expression of the Fas ligand, preventing apoptosis of CD4+ T-cells, which may contribute to the development of autoimmune conditions due to abnormal neurofibromin production, while decreased T cell apoptosis may be an underlying cause for the development of the autoimmune diseases mentioned earlier [1].

There are seven diagnostic criteria for NF1: more than two neurofibromas, freckling of the axilla (Crowe’s sign) and the groin, skeletal abnormalities such as cortical thinning of the long bones of the body or sphenoid dysplasia, six or more café-au-lait lesions that have a maximum diameter of 5 mm in the pediatric age group and 15 mm in adults, two Lisch nodules or more (hamartomas of the iris), optic glioma/CNS tumors, or a first-degree family member with NF1. If any two of these seven criteria are noted, NF1 is diagnosed [10,11].

Although the three main characteristics (Lisch nodules, café au lait spots, and neurofibromas) occur in more than 90% of NF1 patients at puberty, other characteristics are present in a few cases as well, such as learning disabilities, scoliosis, macrocephaly, pseudarthrosis, seizures, malignancies, and short stature [8,12-15]. In our patient, she had constant fatigue with a mild learning disability. While the main cause for short stature in children with NF1 has not been understood completely, some studies have suggested a primary effect of the Nf1 gene regarding inactivation of somatic and bone growth. In previous studies, genetically engineered mice without Nf1 expression in bone tissue were seen to have skeletal irregularities [16,17]; in other genetically engineered mice without Nf1 expression in the nervous system, the neurons were seen to have decreased hypothalamic-pituitary axis action and insulin-like growth factor-I (IGF-1) levels [18]. Short stature could also be the cause of NF1-associated co-morbidities, such as precocious puberty [19], unlike in our case. Lastly, growth hormone deficiency is also a cause of short stature [20]. The normal peak level of growth hormone is 10 ng/ml; in our patient, the growth hormone stimulation test (clonidine and glucagon pharmacological stimulation) confirmed that growth hormone deficiency (1.61 ng/ml) was the cause of short stature. Approximately 50% of NF1 cases are familial (inherited). The rest result from de novo (sporadic) mutations; these occur mostly in paternal chromosomes, and the chance of de novo NF1 increases with advanced paternal age [1]; in our patient, there was no family history and we suspect that her diagnosis was de novo, as we were unable to perform genetic testing on her father.

International research (DIAMOND and EURODIAB) shows a growing worldwide trend in type 1 diabetes in children under 18 years. Additionally, there are significant differences in the incidence of the disease among different countries, with the lowest rates recorded in China and Venezuela (1 per 100 000 people annually) and the highest in Finland and Sardinia (37 per 100 000 people annually) [6]. The primary pathology involves autoimmune pancreatic beta cell destruction and organ damage, which occur due to various causes and bring about absolute insulin deficiency [6]. The association between diabetes mellitus and NF1 might be explained by the appearance of pancreatic and duodenal tumors like somatostatinomas and insulinomas [21]. Somatostatinomas are uncommon neoplasms that ordinarily emerge in the pancreas or duodenum. The clinical signs of somatostatinoma (diabetes mellitus, cholelithiasis, and steatorrhea) result from the reduced production of other gastrointestinal hormones due to high somatostatin levels [22]. Insulinomas are the most widely recognized endocrine neoplasm. They are insulin-emitting tumors of pancreatic source that cause hypoglycemia; they do not have any specific age or sex predominance. Approximately 90% are singular, >90% occur at intrapancreatic destinations, and 90% are <2 cm in diameter [23].

If insulinoma is diagnosed, genetic testing is often performed for mutations of the MEN1 gene. Patients with this mutation should be evaluated for pituitary, parathyroid, and other pancreatic tumors [22].

To the best of our knowledge, only two previous cases have been recorded of the NF1 comorbid with type 1 diabetes mellitus. However, both patients were boys aged between 9-15 years.