Neonatal hyperbilirubinemia as a risk factor for hearing loss.

Permanent hearing loss in childhood is an important public health problem. Its prevalence, when considering only bilateral profund congenital sensorineural hearing loss (SNHL), is 1 in 1000 living newborns and 5 in 1000 when all degrees of hearing loss are considered [1]. Hearing loss produces not only permanent effects on oral language development but may also have implications in emotional and social development [2].

The criteria or risk factors associated with hearing loss were established in 1994 and were revised in 2000. Between 10 and 30% of new-borns meet one of these risk factors, hyperbilirubinemia at birth being one of them. Severe jaundice that requires blood transfusion has become a relatively rare situation today. About 60% of babies born on time and 80% of premature newborns will develop hyperbilirubinemia within the first week of life.

Early detection and treatment of these problems will largely determine the quality of life of these children in the future, so regular monitoring of certain aspects is necessary, including an assessment of hearing abilities [3].

Therefore, the aim of this paper is to quantify the incidence of hyperbilirubinemia at birth as a risk factor for SNHL in children born in the of Insular Maternal and Child University Hospital Complex, in the period 2007-2013, included in the Program for Early Detection of Infant Hearing Loss.

This is a retrospective study of 796 newborns that were diagnosed perinatal hyperbilirubinemia as a risk factor and were included in the Program of Early Detection of Hearing Loss in Children.

In the Canary Islands this program is based on a universal population screening and is divided in two phases (Figure 1) [4]. 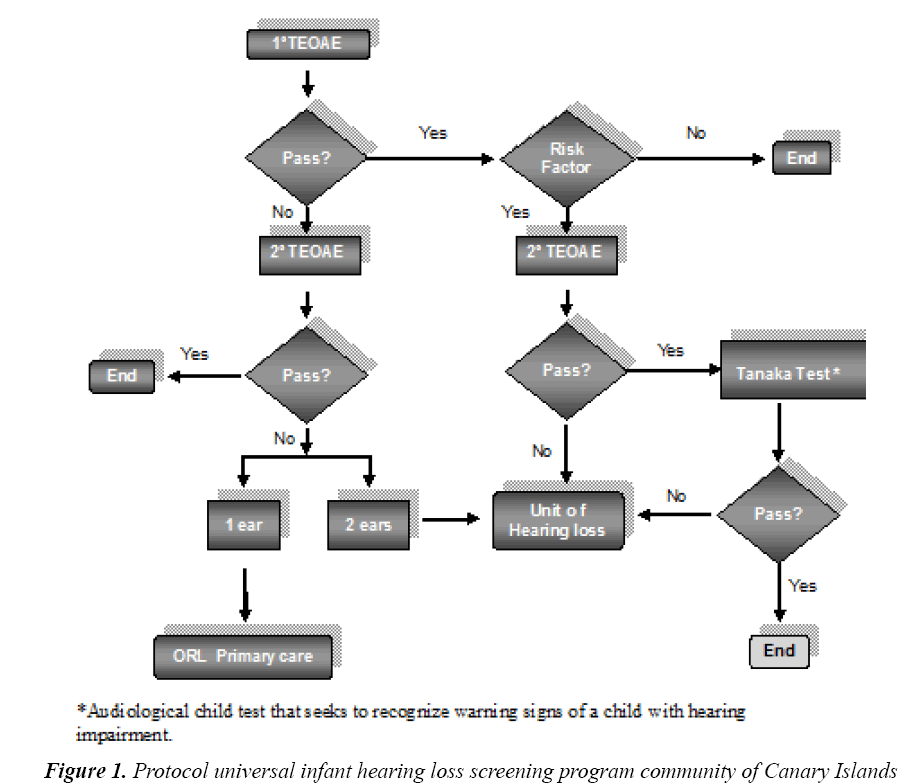 If Transient-Evoked Otoacoustic Emissions (TEOAE) were absent in both ears, they were referred to the Hearing Loss Unit of the ENT department for diagnosis and followup using Brainstem Auditory Evoked Potentials (ABR).

For statistical data processing SPSS 21.0 was used in its Windows version. To study possible associations between categorical variables, the Fisher's exact test (p<0.05) or p-value obtained by the Pearson chi-square test (p<0.001) were used.

The Ethics Committee on Clinical Trials of the Insular Maternal and Child University Hospital Complex approved the execution of this study.

Table 1 shows the descriptive statistics of the distribution of risk factors by sex.

In relation to the distribution of risk factors for hearing loss indicated by ABR results, of the 92 newborns who attended this test, those who showed only hyperbilirubinemia at birth as a risk factor are divided into two groups: 14 with hearing loss and 31 with normal hearing (Table 2).

Table 2: Distribution of risk factor by hearing loss as indicated by ABR

Table 3: Distribution of hearing loss by right/left ear as indicated by ABR

Table 4 shows the distribution of the values of total bilirubin in the blood as a function of weeks of gestation and sex, while the study of the association between transfusion and sex is shown in Table 5.

The percentage of children studied, diagnosed with profound SNHL, among 796 infants with hyperbilirubinemia is 2.135%. This value is above the expected percentage of hearing loss for the general population (p<0.001), with data being statistically significant (Table 7).

Table 7: Asociation between total bilirubin in blood, week of gestation and presence of hearing loss indicated by ABR (p<0.001*)

It has been shown that the only effective strategy for early intervention and treatment of hearing loss in children is early detection, and that this strategy must be universal [5-8].

Severe hyperbilirubinemia that required transfusion has become a relatively rare situation today; however, moderate hyperbilirubinemia is seen in approximately 60% of babies born on time and 80% of premature infants. It is accepted that levels above 20 mg/dl of bilirubin increase the risk of neurological damage in babies born on time, but also that premature ones can suffer consequences with much smaller numbers. There is scientific evidence that demonstrates that sensorineural impairment appears as a result of increased indirect bilirubin in blood, but it has not been demonstrated why there is not a proportional relationship between these values. This effect is attributed to the interaction with other risk factors present in the neonate that may potentiate the effect of hyperbilirubinemia (prematurity, low birth weight, hypoxia, metabolic acidosis or perinatal infections) [9-15].

Clinically bilirubin toxicity may be reversible and not give clinical symptoms or they may be very subtle and appear late. In a study by Suresh et al., no cases of hearing loss were found despite prolonged exposure to high levels of bilirubin >20 mg/dL in the majority of patients evaluated, which led them to indicate that bilirubin is not as toxic to the auditory system as was assumed [16]. Our results match with those of their sample. Of the 17 children diagnosed with SNHL, none had values ≥ 20 mg/dl of bilirubin.

Very low birth weight and prematurity are often concomitant, being difficult to completely separate the factors as being linked to one or the other. These children are a high-risk population for SNHL. In these patients bilirubin levels above 14 mg/dL mean a 30% risk of having hearing loss [17,18].

The Joint Committee on Infant Hearing (JCIH) and the Commission for the Early Detection of Infant Hearing Loss (CODEPEH) define Hyperbilirubinemia as a risk factor for SNHL as: “hyperbilirubinemia that requires blood transfusion”. This definition has a specificity that is clinically unclear, because it is very ambiguous in that it fails to define the value of bilirubin required for such transfusions [19-21].

In our sample, there were 18 blood transfusions with blood bilirubin levels >14 mg/dL. Of these, none suffered severe SNHL. This is in agreement with a study from Wong et al. [22] where from a sample of 99 infants with hyperbilirubinemia, they described three cases of blood transfusion with unaltered ABR results.

Ohl et al. [23] found that the association of two or more risk factors significantly increases bilateral hearing loss. In our sample of 35 new-borns diagnosed with SNHL, 8 had the sole risk factor of hyperbilirubinemia, of which 3 (8.57%) had a diagnosis of bilateral SNHL and 5 (14.28%) had unilateral SNHL. 27 newborns presented an association between two to four risk factors, the most common association being ototoxic medication and very low weight at birth.

In our sample of 3 newborns diagnosed with profound SNHL, only 1 had the sole risk factor for hyperbilirubinemia, the other two also presented the association of exposure to ototoxic medication and very low weight at birth.

None of the children diagnosed with HNS required blood transfusion as treatment to their hyperbilirubinemia.