Neonatal hyperbilirrubinemia and prematurity as cause of green deciduous teeth.

The green pigmentation of the teeth is a rare consequence of neonatal hyperbilirubinemia. About 50 cases of green dental discolouration have been registered in literature, most of which affected children with hyperbilirubinemia caused by biliary atresia. Bilirubin can be deposited in multiple tissues. The pigmentation of skin and mucous membranes is caused by the high cell turnover, contrary to mineralized tissues as dentin and enamel where bilirubin is permanently trapped. The severity and duration of jaundice do not directly correlate with dental changes intensity and tooth discolouration. There are additional predisposing risk factors to the eruption of green teeth in later infancy. This article presents a case involving a 3 years old child with green primary teeth who had a history of neonatal cholestasis and a prolonged conjugated hyperbilirubinemia associated to Alagille syndrome.

The earliest descriptions of green teeth in infants were published by Thursfield in 1912 [1]. Subsequently, literature has registered more than fifty cases. Neonatal hyperbilirubinemia appears in more than half of the newborns in the first seven days of life, causing a yellowish coloration by the deposit of this in the epidermis and mucous membranes. Jaundice can be noticed on the newborn’s face when his serum bilirubin level is about 5 mg/dL and if the level increases it will progress caudally. A variety of clinical conditions in neonatal life can cause Hyperbilirubinemia: perinatal infections, cephalohematoma, haemolysis, polycythemia, bleeding, sepsis, prematurity, biliary obstruction, metabolopathies and chromosomal abnormalities. Elevated levels of bilirubin for months can lead to the deposit of bilirubin in the teeth and other parts of the body. Kernicterus (neonatal neurotoxicity), defined as bilirubin staining of the basal ganglia, pons or cerebellum, most often noticed in postmortem examination, represents the major complication of an elevated serum bilirubin [1-9].

Children who survive this condition frequently have green colour stained teeth. There are clinical studies demonstrating the association between jaundice and kernicterus with hypoplastic green-stained dentine. In this case, the colour of primary teeth goes from yellow to dark green. At a histological level, this relates to bilirubin deposits. Although the pigment is removed over time in the case of soft tissues, it becomes trapped in the hard dental tissues due to the lack of metabolic activity and results therefore in permanent discolouration. Bilirubin staining must be carefully distinguished from intrinsic tooth discolouration of other etiology. Although there is no estimate, the prevalence of green teeth has been proved to be low [3].

The aim of this article is to describe the case of green teeth of the primary dentition in a child with a history of neonatal cholestasis.

This is a case of prolonged conjugated hyperbilirubinemia associated with Alagille syndrome [4]. The history of the patient was: premature new-born of 34 weeks' gestation with a twin pregnancy monochorionic diamniotic, terminated by urgent cesarean section caused by alterations in the cardiotocographic trace. At birth, needs advanced neonatal resuscitation with tracheal intubation. At minute and five minutes of life presented an APGAR score of 3 and 5, respectively. Umbilical arterial pH of 7.09. Somatometry at birth: weight 1870 g, length 44 cm and head circumference 30 cm.

During the first hours of life in the patient, generalized hypotonia was observed along with hypotension, requiring dopamine as ionotropic support. Facial anomalies such as epicanthus, hypertelorism and broad front were observed. During her admission, it presented a sustained low level of serum bicarbonate (minimum 11.5 mmol/L) and metabolic acidosis and the following analytical results were obtained: urea 22.3 mmol/L, creatinine 274 mcmol/L, potassium 6 mEq/L, 124 mEq/L sodium, 1.85 mmol/L calcium, 91 mEq/L chlorides, total protein 33 g/L. As a result, peritoneal dialysis was needed from the third day of life, maintaining it up to 21 days. The renal Doppler ultrasound showed peripheral and bilateral arterial stenosis. The isotopic renogram indicated reduced cortical uptake. Throughout her evolution she presented a Disseminated Intravascular Coagulation State (DIC) requiring several transfusions of packed red blood cells, fresh plasma and platelets. From the respiratory point of view she needed mechanical ventilation for 28 days. The cardiologic examination revealed the presence of pulmonary artery stenosis along with foramen ovale with left to right shunt. High levels of direct bilirubin (427.5 mcmol/L, N: 0-3.4 mcmol/L) and of ferritin (6,600 mcg/L, N: 25-200 mcg/L) were observed before the peritoneal dialysis was removed, maintaining a cholestatic syndrome for several months, which needed treatment with chelating agents and vitamins. The patient suffered Enterobacter cloacae sepsis at 24 days of life, which increased levels of GGT, bilirubin and factor V.

With the available data up to that time, it was thought that there was neonatal haemochromatosis which was treated with a total blood transfusion and intravenous immunoglobulin (1 g/kg). The hepatic Doppler ultrasound showed mild intrahepatic biliary dilatation. Liver scanning showed delayed biliary removal and liver biopsy presented a shortage of bile duct, without evidence of hemosiderin deposits. Regarding hydroelectrolytes, potassium, sodium and chlorine levels were normal, but she needed oral administration of 1.25 hydroxyalkyl-calciferol due to hypocalcemia (1.25 mmol/L) and hyperphosphatemia (3.68 mmol/L). High blood pressure (154/86 mmHg).

At 3 years of age, the patient presented profound hearing loss in addition to chronic renal failure at the predialysis stage, pending a kidney transplant. The intraoral exam showed a dark green pigmentation of her fully erupted primary teeth, although the jaundiced skin had disappeared (Figure 1). 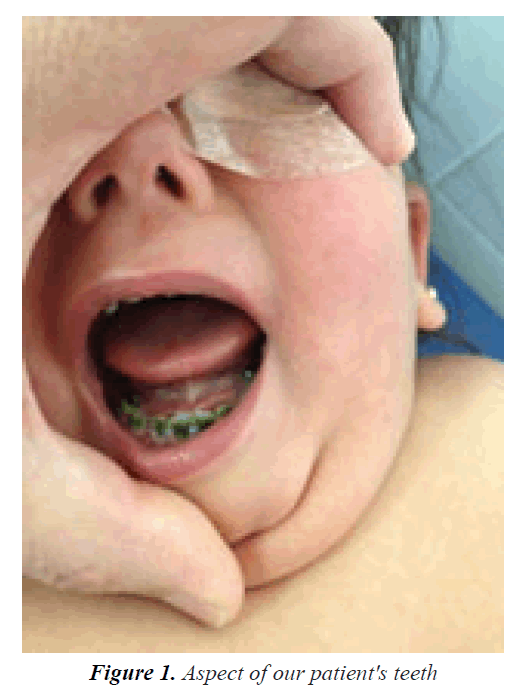 Figure 1. Aspect of our patient's teeth

The exact prevalence of the association of hyperbilirubinemia and green spotted teeth is unknown. In the literature we can find about 50 cases of green dental discoloration, most of which linked with biliary atresia. The fact that conjugated bilirubin is more soluble in water and is capable of being incorporated during the formation of the developing tooth matrix in dentin and enamel could be a reason for this.

Our patient had a medical history of prolonged conjugated hyperbilirubinemia caused by anatomic alterations in the biliary tract. Infections or metabolic, toxic, genetic and anatomic abnormalities can be the causes of neonatal through mechanical obstruction of bile flow or functional impairment of any processes involved in hepatic excretory function and bile secretion. Few cases of green teeth have been found linked with non-conjugated hyperbilirubinemia that can be a result of Rh incompatibility, ABO incompatibility, hemolytic disease, and sepsis. In a review of 48 children with green stained teeth secondary to hyperbilirubinemia the total serum bilirubin level was 20 to 90 mg/dL and the average duration of jaundice was 24.6 weeks [5]. However, green staining can not directly correlate with the duration and intensity of jaundice; it seems to be other factors that determine the appearance of this staining, such as the density of the matrix or alterations in the absorption of phosphate, calcium and fat-soluble vitamins. Low birth weight or extreme preterm birth may be additional risk factors [6]. Primary teeth are the most affected, although permanent dentition staining has been observed related to enamel hypoplasia as a consequence of biliary atresia [7].

Parents can be unsettlingly surprised by the appearance of a discolored tooth. Therefore, it is important for families with children with severe hyperbilirubinemia to have access to anticipatory guidance. Treatment of pigmented teeth is mainly cosmetic and its importance increases as the child grows older. In spite of this, since primary stained dentition is most often replaced with permanent teeth, primary teeth treatment is often not advisable.