Aims: To evaluate the feasibility and safety of a pure natural orifice translumenal endoscopic surgery (NOTES) approach for laparoscopic diaphragmatic repair in a dog model.

Methodology: A 30 mm incision was made in the diaphragm of dogs by needle scalpel to establish the diaphragmatic rupture models after abdominal exploration by transgastric endoscopy. Then, the incision was closed by endoscopic clips. The condition of diaphragmatic healing, abdominal infection, and tissue adhesion were displayed at 4 weeks after operation. Diaphragmatic tissues around the operation site were prepared for pathological examination.

Results: Thirteen diaphragmatic rupture dog models were successfully established. Eleven dogs underwent NOTES and survived for 4 weeks, whereas the other two died during the operation with a success rate of 84.6%. The average operation time was 65 min (range from 35 to 125 min). All survived experimental dogs had well healing in diaphragmatic wounds, but 3 dogs had tissue adhesion between diaphragm and liver or omentum (27.3%, 3 of 11) complicated with fibrous tissue hyperplasia. Besides, one dog had abscess formation.

In recent years, the field of minimally invasive surgery has been transformed from a general trend to minimize traumatic incision and invasiveness of standard surgical procedures to a surgical discipline. Natural orifice translumenal endoscopic surgery (NOTES) is an evolving technique that represents the future of minimally invasive surgery. Since the report of a successful liver biopsy using a transgastric endoscopic approach appeared in 2004 [1], NOTES has not only become the focus of some small end-organ procedures, such as cholecystectomies and appendectomies [2-6], but also represents the tendency of some large organ procedures [7-9]. There are huge potential advantages of NOTES including reduced postoperative pain, reduced incidence of wound infection, incisional hernias, and hematomas. On the other hand, NOTES is minimally invasive and significantly enhances cosmetic appearance [10,11]. Currently, surgery is the most comprehensive treatment of diaphragmatic rupture. Timely repair operation should be practiced on patients with acute traumatic diaphragmatic rupture to avoid the formation of diaphragmatic hernia or strangulation and necrosis of the hernia. Three surgical methods are commonly employed including transthoracic, transabdominal, and thracoabdominal incision [12]. But all these three methods cause severe trauma to the patients. A minimally invasive approach is urgently required in the clinical practice. The aim of this study was to examine the safety and feasibility of performing NOTES for diaphragmatic repair in a dog model.

Thirteen adult mongrel dogs, weighed 18 to 25 kg, were used in this study from 2009 to 2012. One dog died from visible abdominal breathing with quickened pulse and mediatinal flutter and the other died from respiratory failure, cyanosis, and mydriasis. Hence, 11 dogs successfully underwent NOTES. All dogs were purchased from the Laboratory Animal Center of China PLA General Hospital. All protocols involving dog animals were approved by the institutional ethics committee of animal research.

Experimental dogs were fasted for 24 h before the operation, but water deprivation was not given. Endoscopic operation was performed under general anesthesia. Endotracheal intubation, ventilator assisted breathing, and vital signs were closely monitored. The dogs were maintained in the supine position, and dental pad was fixed by an esophagus tube. After skin preparation and routine shin disinfection by iodine, a surgical drape was spread through neck to the abdomen of the dog. A routine endoscopic examination was played and after that, food debris and mucus in the stomach was rinsed by saline and 10% iodophor was used to sterilize the gastric cavity.

Percutaneous endoscopic gastrostomy (PEG) method was used as follows. CO2 gas was inflated into the gastric cavity by endoscopy to fully expand the cavity close to the abdominal wall. After fixed a position by finger deep pressure abdominal experiment and endoscopic observation, puncture needle was punctured vertically into the gastric cavity from abdominal skin under the endoscope. Jag percursor was inserted into the stomach through the puncture needle and was then led to oral by endoscopic biopsy forceps. After the needle was exited, puncture was dilated to 1.5 cm in diameter by balloon from endoscopy. And then the stomach gas was exhausted; balloon was stretched and endoscopy was advanced. Finally, the endoscopic probe entered into the abdominal cavity through the gastric wall.

Pneumoperitoneum was established by insufflating lowpressure CO2 via gastroscope. Routine abdominal exploration was performed to evaluate the condition of the abdominal cavity, such as infection, adhesion, ascites, and organ damage. The whole diaphragmatic fornix including the central tendon was exposed by endoscopic biopsy forceps. After closing the CO2 gas, a 30 mm incision was made in the intermediate diaphragm by needle scalpel to establish the diaphragmatic rupture models.

The incision was closed by endoscopic clips after the CO2 gas was sucked as much as possible. Omentum near the gastric fistula was dragged into the gastric cavity and clipped on the stomach wall to close the gastric fistula. A portion of 1.6 million unit of penicillin was given routinely during the operation, and normal ingestion of food was established 24 h after surgery. The condition of diaphragmatic healing, abdominal infection, and adhesion was displayed by anatomical dissection at 4 weeks after the operation. Diaphragmatic tissues around the operation site were prepared for pathological examination.

PEG method was successfully performed in all animals without severe bleeding. No infection, adhesion, ascites, and organ damage was found during abdominal exploration. The diaphragmatic rupture model was successfully established in all dogs (Figure 1A). After the diaphragmatic incision, visible abdominal breathing with quickened pulse and mediatinal flutter was found in one dog, which was not recovered although immediate chest compression was delivered. The rest 12 experimental dogs successfully underwent the repair of diaphragmatic rupture by 3 to 7 endoscopic clips (Figure 1B) and the closure of the gastric fistula by omentum (Figure 1C). 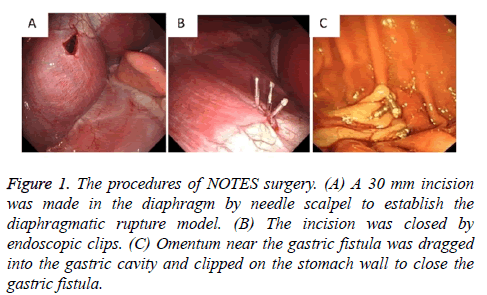 After the tracheal intubation, respiratory failure, cyanosis, and mydriasis were found in one dog and the dog still died at 20 min after immediate intravenous respiratory stimulant and chest compressions. Lobar collapse was found in the diaphragmatic muscle incision side during postmortem anatomy (Figure 2). Eleven dogs underwent NOTES and survived for 4 weeks, and the success rate of the operation was 84.6% (11 of 13). The average operation time was 65 min (range, 35-125 min) from PEG to the closure of gastric fistula. 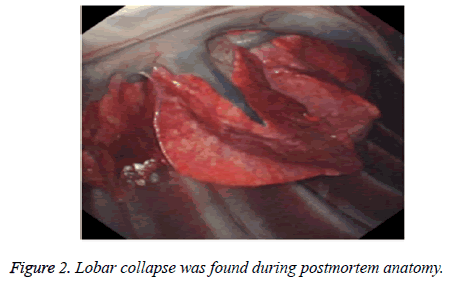 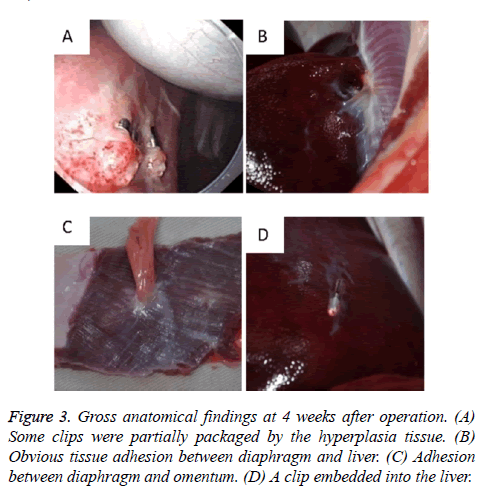 A clip was found dropped off and embedded into the liver (Figure 3D). The pathological situation of diaphragmatic tissues around the operation site was summarized in Table 1 and Figure 4.

Table 1. Pathological status of diaphragmatic tissues around the operation site. 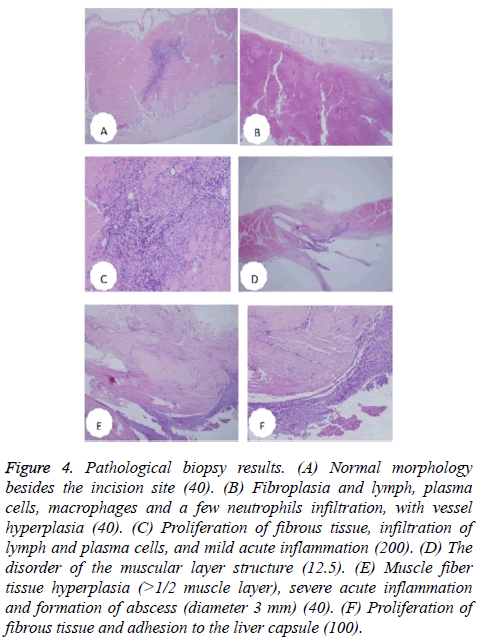 In recent years, the field of minimally invasive surgery has been transformed from a general trend to minimize the external trauma and invasiveness of standard surgical procedures to a surgical discipline. NOTES as an alternative access to the abdominal cavity, providing potential benefits including reduced incidence of skin incisions, decreased surgical site infections, alleviated postoperative pain, satisfied cosmetic appearance and lower incidence of herniation or adhesion [13-15]. Diaphragm injuries frequently result from blunt and penetrant trauma as well as spontaneous trauma [16,17]. No treated diaphragm ruptures lead to herniation of gastrointestinal organs into thorax. This situation can cause complications such as strangulation or perforation of translocated organs which may result in high mortalities. Therefore, surgical repair should be performed without any delay following the diagnosis of diaphragm rupture. Repair is performed with thoracic or abdominal or both approaches by using open or laparoscopic techniques [18,19]. In this study, we introduced a NOTES technique for diaphragmatic repair in a dog model. To our knowledge, this is the first report of treating diaphragm rupture with NOTES. Our research provided a theoretical basis for the pure NOTES approach for the treatment of diaphragmatic repairing. We found a rapidly increased diaphragm muscle tension after diaphragmatic incision.

During abdominal exploration, diaphragmatic exposure, or incision clipping, excessive gas injection would lead to increased diaphragmatic muscle tension, mediastinal and tracheal shift, and lung collapse, which is also the cause of animal death. Therefore, a limited amount of CO2 gas should be insufflated into the abdomen. Meantime, CO2 gas should be sucked as much as possible before the incision was closed by endoscopic clips. Evident tissue adhesion between diaphragm and liver was found in two dogs, and the adhesion between diaphragm and omentum was found in another dog. Moreover, a clip slipped off and invaded into the liver, which was related with the location of diaphragmatic rupture. Clips on the right side wound were easily fixed by rubbing the liver. Repeatable friction would also lead to tissue adhesion. In addition, metal clips cannot be absorbed by human body and may cause foreign body response. Hence, absorbable clip under the endoscope should be developed in the future. Average operation time was 65 min (range, 35-125 min), which is still longer than that of traditional open or laparoscopic operation. Although NOTES procedures typically last longer than traditional surgery, we do believe that this operation can be performed in a shorter time after gaining more experience and acquiring the learning curve. In conclusion, a pure NOTES approach is technically feasible for diaphragmatic repair using transgastric endoscopic operation in animal models. Although the safety of this approach remains to be validated, NOTES deserves widespread application along with the instrumental advancement, learning curve and obtaining more experience.