Asthma is a complex inflammatory disease that affects the airways is suffered by many people around the world, it is characterized by hyperhidrosis and excessive mucus secretion with other clinical symptoms [1,2]. Inflammatory processes is associated with the imbalance oxidative and antioxidants nature of the lungs a high level of oxygen so they are more susceptible to oxidative stress and the formation of free radicals and low activity of antioxidant enzymes [3]. The oxygen is the main element in the production of energy, but the reduction of this element is not complete even under normal conditions as often arise from the middle groups of active chemicals and called free radicals inflammatory response [4]. In asthma associated with the generation of free radicals (hydrogen peroxidase, OH-, superoxide anion O2, hypochlorous acid). This process regulates inflammatory mediator by inflammatory cells, such as eosinophilis, and neutrophils presence both cells causes tissue damage through the secretion of enzymatic products such as myloperoxidase, eosinophil peroxidase of neutrophils and eosinophilis cells respectively these enzymes production high-effective free radicals and oxidants that cause oxidative damage to the parasites and pathogens that invade the body as part of the innate defense mechanism of the host [5,6]. Myeloperoxidase and eosinophil peroxidase can react with H2O2 generated during a respiratory burst, and generating hypochlorous acid (HOCl), similar compounds that can cause injury to surrounding tissue during the inflammatory process [7]. So the study aims determination role of myeloperoxidase and eosinophil peroxidase in with asthma.

A total of 100 asthma patient's and 20 control blood samples were collected from the Basra General Hospital, Al-Sadr General Hospital and, Al-Fayhaa General Hospital. The patients complaining of symptoms related wheezing, chest tightness, dyspnea attending, and all these patients were diagnosis by specialist physician. The patients and controls were from both sexes and their ages were from (20 y-70 y), Blood samples were collected from all asthma patients and controls in plain tube. 3 ml of collected blood were centrifuged for 5 min (3000 rpm/min), and kept in the refrigerator at a temperature of -4°C for using in measuring the MPO and EPO enzyme by ELISA test.

The results showed that the concentration MPO in level ≤ 40 ng/ml had higher rat (40.54 ± 29.92, 36.91 ± 20.18, 34.42 ± 16.04) (median ± SD) in all asthma patients (active asthma, moderate and sever) respectively with significant difference P ≤ 0.05 between asthma patients an d control, also the results show that concentration MPO in level<40 ng were increased in acute asthma subjects as compared to, moderate and severe asthma subjects Figure 1.

Figure 2: Differences in concentration EPO in serum of asthma subjects and control group. 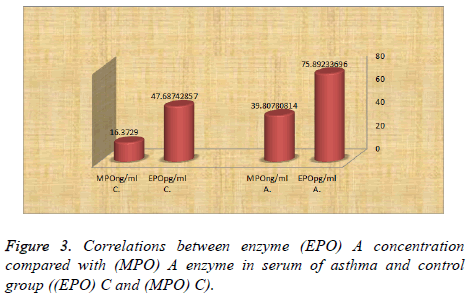 Figure 3: Correlations between enzyme (EPO) A concentration compared with (MPO) A enzyme in serum of asthma and control group ((EPO) C and (MPO) C).

Myeloperoxidase (MPO) and eosinophil peroxidase (EPO) enzymes produced from granular cells in inflammatory processes and increased severity of asthma. The current study showed that the concentration MPO had higher rat in active asthma compared with, moderate and severe asthma, Several studies have shown that neutrophils produce high amounts of the enzyme when exposed asthma, patients to antigens [8], also the study by [9] and showed that neutrophils cells release a high level of MPO in asthmatic patients compared to healthy. Also [10] found significant differences in the level of MPO in peripheral blood and neutrophil cells between patients and healthy patients. On the other hand the study by [11] showed that no significant differences in the level of MPO among asthma patients and control while In study by [12] reported that increased Neutrophils be in severe asthma patients. Authors showed that MPO used to distinguish between bacterial infections and viral infections in asthma patients [13]. Also the result showed that EPO had higher rat in active asthma compared with, moderate and severe asthma, many data found that the enzyme eosinophil peroxidase was responsible for producing hypobromous acid in the airways. The results of this study were agreed with [11] showed that the concentration of EPO is higher compared to healthy subjects, another study by [14] show that eosinophil peroxidase produces substantial amounts of hypobromous acid in the airways of stable asthmatics. Although this highly reactive oxidant is a strong candidate for exacerbating inflammatory tissue damage in the lung, its role in asthma remains. The EPO and MPO play important role in forming oxidants and their ability oxidative damage to pathogen and host tissue, eosinophil peroxidase and myeloperoxidase use hydrogen peroxide to produce hypobromous acid and hypochlorous acid. These powerful oxidants may damage the lungs if they are produced as part of the inflammatory response in asthma [15]. Also [16] showed that eosinophils and neutrophils generate an array of oxidants that may be important contributors to tissue damage in the airways also [17] showed that oxidized by peroxidases to produce a much stronger oxidant.