Breast cancer is one of the most commonly occurring cancers in women. Early diagnosis of breast cancer is crucial and important in reducing mortality rate and improving the patient’s quality of life. An early diagnosis of this disease has more importance and considerably improves the prognosis and leads to more effective treatment for the patient. Expert system is a computer system that uses artificial intelligence to emulate the decision-making ability of a human expert and to solve problems within a specialized domain that ordinarily requires human expertise. In order to achieve the feats of apparent intelligence, an expert system relies on two components called knowledge base and an inference engine. A knowledge base is an organized as a collection of facts about the system’s domain. An inference engine interprets and evaluates the facts in the knowledge base in order to provide an effective solution. Typical tasks for expert systems involve classification, diagnosis, monitoring, and design, scheduling, and planning for specialized endeavors.

Di-Leo et al. discussed about new approaches for improving the outcomes in breast cancer in Europe in terms of detection accuracy [5]. They also discussed about the precautions to prevent the breast cancer disease. Mani et al. applied an objective and reproducible immunofluorescence-based assay to quantify the distribution of Tumor-infiltrating lymphocyte (TIL) expression in multiple spatially separate regions from a population of breast tumors [6]. Buchsbaum et al. explain in detail about the breast cancer is a death disease and also must be taken remedial actions against the breast cancer [7]. They also discussed some necessary steps for preventing the breast cancer disease. However, the existing systems are not able to identify the optimal number of features leading to increase in complexity of the classifier. Hence, a new feature selection algorithm is necessary to identify optimal number of features. In this paper, we propose a new Multi-Ranked feature selection algorithm for effective feature selection to achieve the better classification accuracy over the medical dataset. The major contribution of this paper is the introduction of multi-ranking methodology for ranking the features efficiently. Due to efficient feature selection, the proposed system achieves better classification accuracy.

In this proposed feature selection algorithm, first calculate the Information Gain Ratio (IGR) value for all features by using the equations (1-3) according to Ganapathy et al. [3].

The existing optimization algorithm called Forest Optimization Algorithm (FOA) [2] is used in this work for re-ranking the features. Here, we have calculated the feature weights according to the age calculation of FOA. In this way, we have considered each patient record of the dataset as a tree. These features are ranked using the local seeding, global seeding and fitness function. Finally, this algorithm has obtained the best subset of the given medical dataset according to the re-ranking of the features.

We have used the Enhanced Multiclass Support Vector Machine (EMSVM) [3], for evaluating the selected feature subsets during the process of feature selection. In this work, this classification algorithm helps to calculate the detection accuracy based on many aspects of the problem. It is capable of solving the multiclass problem efficiently.

In this paper, we propose a new feature selection algorithm called Multi-Ranked Feature Selection Algorithm (MRFSA) with the help of IGR, Forest Optimization Algorithm [2] and EMSVM [3]. Here, the proposed algorithm chooses a set of optimal features as input to the forest optimization algorithm for selecting the valuable features from the full set of features. These selected features are evaluated by using EMSVM. If the selected feature subset provides better classification accuracy then the process is stopped otherwise it is repeated until it provides classification accuracy above a prescribed level.

Step 1: Read all the features Fi

Step 2: Calculate the Information Gain Ratio value for all features using the equations (1-3).

Step 5: Initialize the value of ac in to ap.

Step 6: Read the next feature and assign into a temporary variable f.

Step 7: Append this feature into the new feature Subset.

Step 9: Find the accuracy for the new feature subset using EMSVM [3] and store into ac.

We have used the Wisconsin Breast Cancer Dataset (WBCD) taken from the UCI Machine Learning repository in order to evaluate the effectiveness of the proposed classification model [8,9]. We have evaluated the proposed feature selection algorithm by using this dataset. Here, we have used three evaluation metrics such as specificity, sensitivity and f-measure for finding the classification accuracy. The experiments have been conducted by using JAVA programming language. We have considered the WBCD dataset for evaluating the proposed algorithm. The standard dataset is divided into two sets (60% and 40%), one for training and another one set for testing. Five experiments have been conducted for evaluating the proposed system with different size of datasets with full features. Figure 1 shows the performance analysis of the proposed system with full features and selected features. 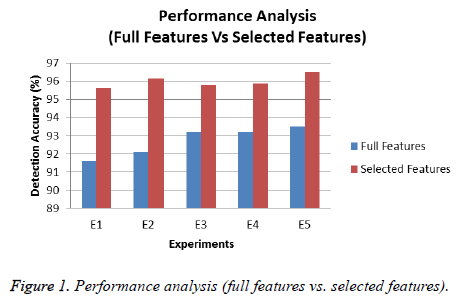 From Table 1, it can be seen that the proposed feature selection algorithm is performed well than the existing feature selection algorithms. This is due to the fact that the use of ranking algorithm and the MSVM algorithm. Here, the classification process is helpful for selecting optimal number of features. Figure 2 shows the comparative analysis between the proposed system and the existing systems which are developed by various researchers in the past in this direction. The standard and famous classification and optimization algorithms are considered for comparative analysis to know the efficiency of the proposed system.

From Figure 2, it can be observed that the proposed classifier provides more accuracy than the existing classification algorithms due to the fact that it uses the multi-ranked features. The combination of multi-ranking and multiclass classification is also used to improve the overall accuracy of the proposed system. 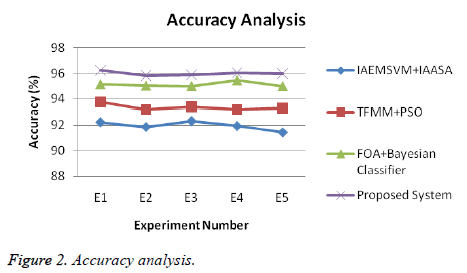