Jejunal diverticula are a rare clinical disease that was first reported by Sommering in 1974. Jejunal volvulus is the torsion of the jejunum and its mesentery, and is a medical emergency. There are no specific symptoms for jejunal diverticula, making this disease difficult to identify. Furthermore, this can lead to volvulus, and further lead to ileus in some cases. In this report, we present a rare case of a 54-yold male diagnosed with multiple jejunal diverticula with jejunal volvulus, aiming to further enhance the understanding of this disease.

Jejunal diverticula are rare, and its incidence is less than 0.5% [1-3]. Since this is a multiple disease, it has also been called multiple jejunal diverticula [4]. However, its etiology remains unclear. Furthermore, most of these cases are asymptomatic, and some can cause volvulus and ileus. It is difficult to diagnose this disease, and a delay in diagnosis may seriously impact the prognosis of intestinal obstruction treatment [5,6]. In this report, we described a patient with multiple jejunal diverticula and jejunal volvulus, and further discussed its diagnosis and treatment.

A 54-y-old male presented to our department with a one day history of upper abdominal distending pain, without anal exhaust and defecation. The patient had many such similar symptoms in the past, and these symptoms could be alleviated after treatment in a mild degree. The patient has no history of hypertension, diabetes, rheumatic disease and glucocorticoid exposure for a long time. However, the patient has a history of smoking (one pack pack/day) and drinking (half of one jin of liquor/day) for more than 30 y. Periumbilical tenderness was obvious on physical examination without other positive abdominal signs. The laboratory value was notable for neutrophils (77.9%).

Furthermore, the unenhanced Computed Tomography (CT) examination of the abdomen was performed to evaluate the patient’s condition. Results revealed swelling in parts of the small intestine, mild swirl changes of the mesenteric vessels, duodenal descending part of the diverticulum, a gallstone, a tumor in the right liver, and peritoneal effusion. 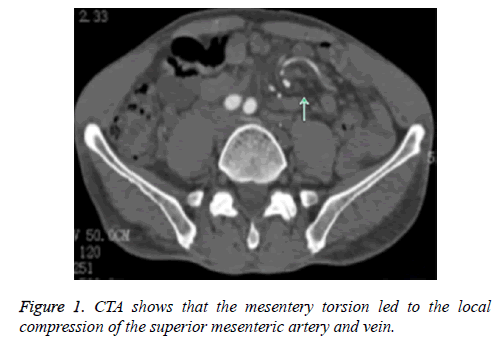 Figure 1: CTA shows that the mesentery torsion led to the local compression of the superior mesenteric artery and vein.

The patient underwent laparoscopic cholecystectomy, in which a small intestinal resection and end-to-end anastomosis was performed at day eight of hospitalization after excluding surgical contraindications.

Multiple jejunal diverticula were found at the ligament of Treitz at 80 cm from the distal jejunum to 100 cm of the small intestine, and the torsion that demonstrated the strangulation of the intestine was resected (Figure 2). 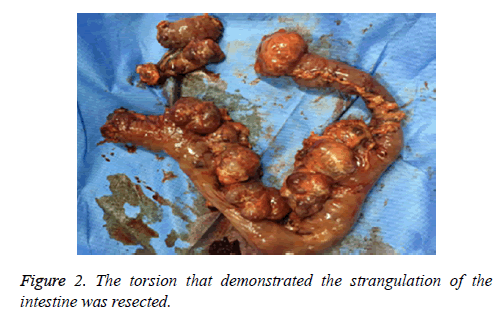 Figure 2: The torsion that demonstrated the strangulation of the intestine was resected.

Furthermore, histopathology revealed a marked chronic inflammation of the mucosa, necrosis of the part of the mucosa, mucosa hemorrhage, congestion, edema, thrombosis and muscular atrophy of parts of intestinal wall, while there was no necrosis on both ends of the cutting edge or chronic cholecystitis with gallstone (Figure 3). The patient had an uneventful postoperative recovery, and was discharged at postoperative day six. The patient was able to eat and defecate normally in the following month, and abdominal pain did not recur. A review of the abdominal CT revealed swirling mesenteric vessels, hepatic hemangioma and a duodenal descending part of the diverticulum. 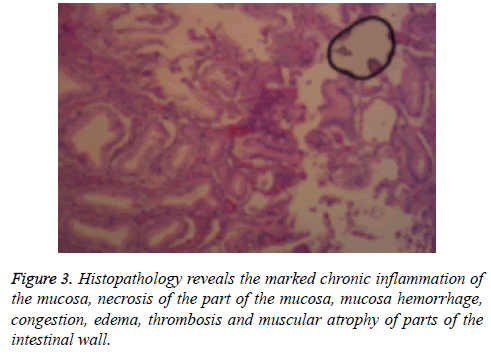 Figure 3: Histopathology reveals the marked chronic inflammation of the mucosa, necrosis of the part of the mucosa, mucosa hemorrhage, congestion, edema, thrombosis and muscular atrophy of parts of the intestinal wall.

Jejunal diverticula are rare disorders of the jejunum, which is more common in men older than 50 ys old. Jejunal diverticula are mostly false diverticula, which are mucosa and sub-mucosa that herniate through some gaps that penetrate mesenteric vessels and establish in the muscularis propria [7]. As a result, it is known to occur on the mesenteric border of the jejunum [8]. However, its specific etiology remains unclear [9]. Patients with jejunal diverticula are generally asymptomatic, and sometimes experience symptoms such as abdominal pain, abdominal distention, nausea and vomiting, melena and anemia [10]. However, jejunal diverticula has many serious complications, which include intestinal volvulus, intussusceptions, obstruction, diverticulitis, diverticulum perforation, and hemorrhage [11,12]. Furthermore, 8-30% of these complications need surgical operations [13]. What is the reason for jejunal volvulus with multiple jejunal diverticula? In the present case, we found fibrous adhesions and lumen stenosis that could be induced by jejunal diverticula inflammation between the mesentery and intestinal walls, which may interrupt intestinal location and arrangement [14]. This was the central importance. Meanwhile, many other causes have been reported, such as tumors, pregnancy, Meckel’s diverticulum, hematoma and surgical complications [15].

This disease is difficult to diagnose through clinical presentation due to nonspecific symptoms. Accessory examinations, especially for CT and angiography, could improve preoperative diagnostic accuracy [16-19]. CT scans can show “whirling signs”, the local expansion of the intestinal wall, and the thickening on the mesenteric side [20]. Angiography scans can demonstrate the twisted mesenteric vessels and dilated superior mesenteric veins. Proper preoperative management and early surgical treatment are necessary for jejunal volvulus. In order to avoid the recurrence of jejunal volvulus, jejunal fixation or appropriate resection of the jejunum should be conducted. Consequently, we first untwisted the volvulus, lysed the fibrous adhesions, removed the jejunal diverticulum, and finally rearranged the entire jejunum.

This study complies with ethical standards.

All authors have no conflict of interests to disclose.