The aim of this study was to explain the drug resistance pattern in E. coli isolated from community acquired Urinary tract infection (UTIs). A total of 168 urine samples were collected from the UTI patients followed by isolation and identification of E. coli strains. Antibiotic sensitivity and resistance analysis was performed by the disc diffusion method employing multiple antibiotic discs. The sensitivity was monitored by zone of inhibition around the disc. Clinical study revealed that this infection is more common in young pregnant women. Antibiotic susceptibility data revealed that majority of the isolates were resistant against 4 or more antibiotics. This study concludes that E. coli is one of the important causative agents of urinary tract infection in young women especially during the state of pregnancy.

Increasing resistance in bacterial pathogens is of worldwide concern. The prevalence of antimicrobial resistance in both out and hospital patients with UTI is increasing and can vary according to geographical and regional location [8,9]. In UTI infection, antimicrobial therapy is initiated even before the results of urine culture are available. Hence, there exists a great need for antimicrobial resistance surveillance at local, national and international level. There is no doubt that antimicrobial therapy is necessary when urinary tract infection (UTI) develops in pregnancy. The aim of therapy is to maintain sterile urine throughout pregnancy without causing toxicity to the mother or the fetus. However, the best mode of achieving this aim is still unclear. There is no consensus on the choice of antimicrobials, duration of therapy or on the prophylactic use of antimicrobials in pregnancy [10,11]

The aim of this study is to determine antibiotic susceptibility of E. coli prevalent in community acquired UTI infection. We have also explored the susceptibility data as well as possibility of prevalence of UTI during pregnancy. Moreover, we are also interested to find whether the resistant markers are present on the plasmid.

Strains were plated on to the Mac Conkey agar plates. Pink colonies were observed. A well isolated single colony was picked and incubated in nutrient broth, at 37º C for 12-16 hrs. then the inoculum was spread on eosine methylene blue agar plates and incubated at 37ºC for 24 hrs., green colonies having a metallic sheen were observed. A single colony was picked up from this and was then streaked on to the hard agar plates. These plates were then kept in the incubator at 37ºC for overnight followed by characterized by battery of biochemical test. The strains were stored at -80ºC for further studies.

A total of 168 samples were collected from patients with community acquired UTI during a 6 months window within the study period. 102 of them were identified as E. coli. Our study revealed that out of 61% of E. coli infection 17% are male patients whereas remaining are females. Moreover, age group and pregnancy conditions were also monitored as shown in table 1. Pregnancy evaluation showed that out of 59.8% (61/102) infected young women, 86.8% (52/61) were found in their early or late phases of pregnancy. This figure of reduced to 21.7% (5/23) in older pregnant women (Table 1). Other studies of UTIs in outpatients have shown E. coli to be the most common etiological agent (>80%), with a preponderance in young females (30 times> young males).

A total of 102 samples were identified as E. coli among 168 UTI samples. Their antibiotic sensitivity and resistance were tested by the method stated above. Our data showed that 90% isolates were resistant against ampicilin. Present studies also showed that 60-79% isolates were resistant against chloramphinicol, erythromycin, rifampicin, sulphamathizole, tetracycline. Norfloxacin showed intermediate resistance. The most effective antibiotics in our study against E. coli were found to be kanamycin and streptomycin, are also supported by previous studies (Table 2) [13,14]. 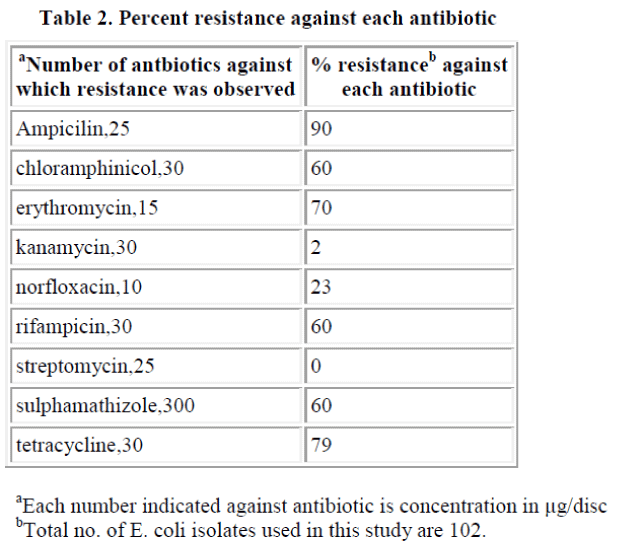 aEach number indicated against antibiotic is concentration in μg/disc
bTotal no. of E. coli isolates used in this study are 102.
Table 2: Percent resistance against each antibiotic

Our study concludes that E. coli is one of the important causative agents of urinary tract infection in young women especially during the state of pregnancy. Most of the isolates showed multiple antibiotic resistance, maximum resistance was found against ampicillin whereas, least resistance was detected against streptomycin and hence it might be the drug of choice to treat UTI.

This study was supported by internal funds of Biotechnology Unit AMU Aligarh, India. Authors are thankful to Dr. Jamal Khan for providing the clinical samples and patients history.