Multidrug resistance-associated proteins (MRPs) are efflux transporters known to transport a diverse set of substrates, such as amphipathic chemicals, organic anions and endogenous molecules. MRP2 generally performs excretory or protective roles, and is primarily expressed on the apical domain of hepatocytes. High gravitational acceleration force acting along the body axis from the head to the feet (+Gz) causes considerable strain to several organ systems. Exposure to high +Gz severely reduces blood flow to the visceral organs, including the liver. Whereas previous studies have shown the regulation of MRP2 expression in some experimental animal models, the altered expression of MRP2 associated with +Gz exposure has not yet been investigated. The aim of the present study was to examine the effect of high +Gz exposure on hepatic MRP2 expression. Using a small animal centrifuge, nineteen male Sprague-Dawley rats were exposed to +10Gz or +13Gz three times for 3 minutes each. The entire liver was obtained from each rat, and the expression levels of MRP2 were evaluated using immunohistochemistry. MRP2 expression was restricted to the canalicular membranes of hepatocytes. In the control group, MRP2 was localized in a strictly polarized fashion, yielding spider-like canalicular structures. Rats exposed to +10Gz also showed a typical, strong canalicular MRP2 staining, which resembled the control group. By contrast, in rats exposed to +13Gz, the staining was weak, fuzzy and frequently absent among the hepatocytes. This study is the first to describe +Gz exposure-induced alteration in the expression of hepatic MRP2. We observed significantly reduced MRP2 expression in the liver of rats exposed to +13Gz. These finding suggests that down-regulation of hepatic MRP2 occurs after high +Gz exposure.

Multidrug-resistance protein 2 (MRP2), formally known as ATP-binding cassette, sub-family C, member 2, is a member of the superfamily of ATP-binding cassette transporters [1]. MRP2 is an important determinant of tissue distribution and elimination that transports a diverse set of substrates and endogenous molecules, such as amphipathic chemicals, organic anions, drug conjugates, leukotriene C4, prostaglandin, bilirubin glucuronide and bile acids [2-4]. The expression and function of this export pump are highly significant in the canalicular membrane of hepatocytes, although other tissues, such as renal proximal tubular cells and intestinal epithelial cells, also express MRP2 [5,6]. MRP2 expression is responsive to a number of drug treatments and diseases affecting the liver, particularly cholestatic liver disease. Recent studies have indicated that the regulation of MRP2 function occurs at three distinct levels, including its endocytic retrieval from the canalicular membrane, its translation regulation and its transcriptional regulation [7].

A high gravitational acceleration force acting along the body axis from the head to the feet (+Gz) causes considerable strain on several organ systems, including the brain, heart, kidneys and liver. Exposure to high +Gz has been shown to severely decrease blood flow to the visceral organs, including the kidneys, spleen, pancreas and liver, in an apparent effort to maintain blood flow to the brain and heart [8]. It is likely that the changes in the visceral blood flow are the result of some combination of +Gz-induced cardiovascular reflex responses and emotional stress that cause sympathetic vasoconstriction and an increase in the total peripheral resistance of the visceral vascular beds. Such altered expression of MRP2 has been reported in some animal experiments. Treatment of rats with lipopolysaccharide, which induces cholestasis, induces the endocytic retrieval of MRP2 [9], and this retrieval is reversible if the liver is perfused with hypo-osmotic buffer within 3 hours of lipopolysaccharide administration [10]. The transcriptional regulation of MRP2 expression has been characterized both with respect to decreased expression in disease and increased expression by treatment with the various classic enzyme inducers and drugs. Additionally, the treatment of rats with ethinylestradiol markedly decreases MRP2 protein expression but has no effect on the expression mRNA encoding MRP2, indicative of posttranscriptional control of MRP2 [11]. Taken together, a number of factors can alter MRP2 by changing its level of expression or by directly inhibiting (or stimulating) its activity. However, the regulation of MRP2 during +Gz exposure, a condition that can adversely affect the liver, has not yet been described. The purpose of this study was to examine the effect of high +Gz exposure on the expression of hepatic MRP2 using immunohistochemical staining.

Nineteen male Sprague-Dawley rats, seven to nine weeks of age and weighing between 200 and 250 g, were purchased from Samtako Bio Korea Co., Ltd. (Osan-si, Gyeonggi-do, Republic of Korea). Throughout the experimental period, animals were fed standard laboratory rat chow, provided with free access to water, and maintained on a 12:12-hour light-dark cycle with temperature controlled at 20 to 25°C, in pathogen-free conditions. Rats were randomly assigned to three experimental groups. Fourteen of 19 rats were exposed to +10Gz (7 rats) or +13Gz (7 rats) three times for 3 minutes each, and the remaining 5 rats were assigned to the control group (+1Gz). Rats were placed inside a cylindrical plastic restraint device which, when mounted in a centrifuge, allowed +Gz to be delivered along their rostro-caudal axes. After the rats were secured, the restraint device was placed onto a small animal centrifuge. During the intervals between centrifuge runs, rats were allowed to move freely in the cage.

At the end of the experiment, animals were anesthetized with sodium pentobarbital (45 mg/kg) and laparotomized via midline incision. The livers obtained from the control and centrifuged animals were immediately preserved in a 10% formaldehyde (formalin) solution. After 48 to 72 hours of formalin fixation, the entire liver was dissected. Subsequently, the liver tissues were embedded in paraffin and processed for routine hematoxylin and eosin and immunohistochemical staining.MRP2 expression was assessed by immunostaining using the Bond Polymer Intense Detection System (Vision Bio- Systems, Mount Waverley, Victoria, Australia), following the manufacturer’s instructions. To summarize, 4-μm sections of formalin-fixed, paraffin-embedded tissue were deparaffinized with Bond Dewax Solution (Vision Bio- Systems), and an antigen retrieval procedure was performed using Bond ER Solution (Vision BioSystems) for 30 minutes at 100°C. Endogenous peroxidases were quenched by incubation with hydrogen peroxide for 5 minutes. The sections were incubated for 15 minutes at ambient temperature with a mouse monoclonal anti- MRP2 antibody (1:100, clone M2 III-6, Abcam, Cambridge, MA, USA). The biotin-free polymeric horseradish peroxidase-linker antibody conjugate system was used in the Bond-maXTM automatic slide stainer (Vision BioSystems), and visualization was performed by using a 3.3- diaminobenzidine (DAB) solution (1 mM DAB, 50 mM Tris-HCl buffer [pH 7.6] and 0.006% H2O2). Nuclei were counterstained with hematoxylin. Slides were subsequently dehydrated following a standard procedure and sealed with coverslips. In order to minimize interassay variation, positive and negative control samples were included in each run. The positive control sample was normal liver tissue. The negative control was prepared by substituting non-immune serum for the primary antibody; no detectable staining was evident.

Immunohistochemically, MRP2 appeared to be restricted to the canalicular membrane of the hepatocytes. In the control group, MRP2 was localized in a strictly polarized fashion, yielding spider-like, canalicular structures (Figure 1A). The positive staining was almost homogeneous among the different areas (surface and central areas) of the liver. Rats exposed to +10Gz also showed a typical canalicular staining for hepatic MRP2, resembling the control group (Figure 1B). By contrast, rats exposed to +13Gz showed a significantly reduced staining intensity for hepatic MRP2 in comparison with the control group (Figure 1C). The staining was weak, fuzzy and frequently absent among the hepatocytes (Figure 1D). None of the specimens showed significant levels of cytoplasmic or nuclear MRP2 immunoreactivity. 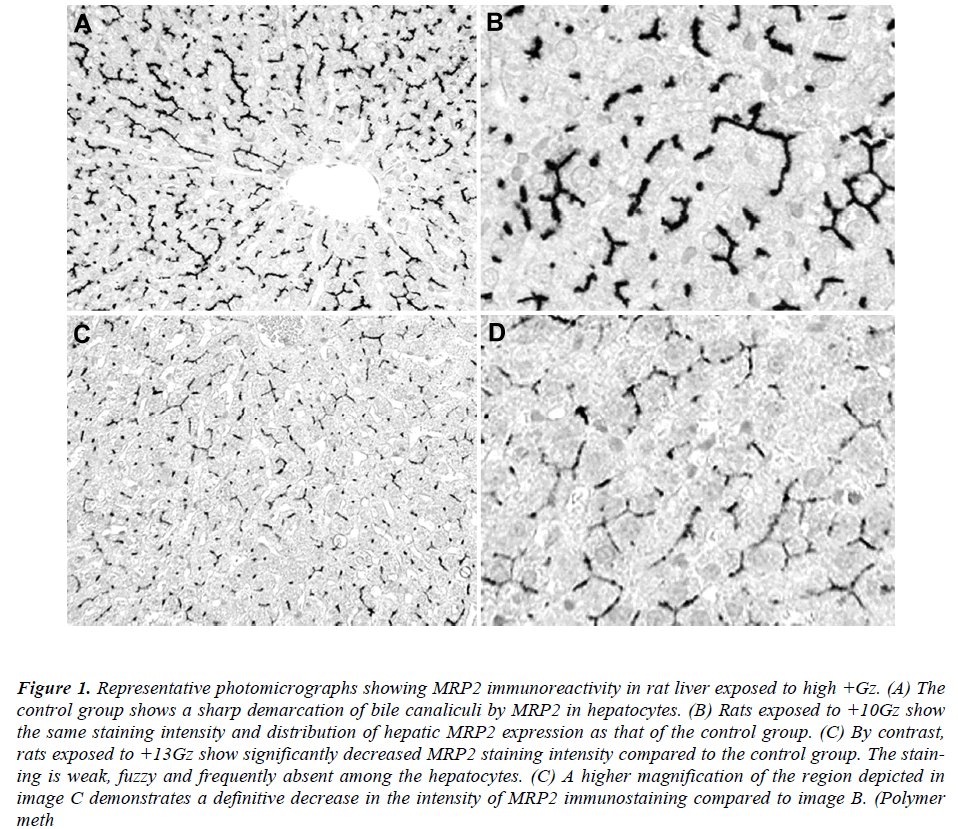 Figure 1: Representative photomicrographs showing MRP2 immunoreactivity in rat liver exposed to high +Gz. (A) The control group shows a sharp demarcation of bile canaliculi by MRP2 in hepatocytes. (B) Rats exposed to +10Gz show the same staining intensity and distribution of hepatic MRP2 expression as that of the control group. (C) By contrast, rats exposed to +13Gz show significantly decreased MRP2 staining intensity compared to the control group. The staining is weak, fuzzy and frequently absent among the hepatocytes. (C) A higher magnification of the region depicted in image C demonstrates a definitive decrease in the intensity of MRP2 immunostaining compared to image B. (Polymer meth

In this study, the subcellular localization of hepatic MRP2 after centrifugation was determined using immunostaining. We observed a significantly decreased level of hepatic MRP2 expression after exposure to +13Gz. This finding suggests that exposure to high +Gz, at least more than +10Gz, down-regulates hepatic MRP2. Our study is the first to describe +Gz exposure-induced alteration to MRP2 expression, while the precise mechanism by which +Gz exposure alters the expression of MRP2 remains unknown. On the basis of a previous study demonstrating a marked reduction in blood flow to the liver during +Gz exposure [8], we hypothesized that hepatocellular hypoxia due to high +Gz-induced inadequate hepatic blood flow might be attributable to the down-regulation of MRP2.

This hypothesis is supported by a recent study indicating that tissue hypoxia induced by hepatic arterial deprivation down-regulates MRP2 in rat livers [12]. Direct evidence that the expression of MRP2 in hepatocytes is regulated by hypoxia was provided by in vitro studies. Retinoid X receptor-α forms heterodimers with the farnesoid X receptor, which activates transcription of the MRP2 gene [13, 14]. Fouassier et al. found in hypoxic hepatocytes a marked decrease in the expression of retinoid X receptor- α and farnesoid X receptor genes [12]. Thus, it is reasonable to assume that the reduction of MRP2 by +Gz exposure- induced hepatocellular hypoxia would be mediated by the down-regulation and/or deactivation of their transcription factors.

The possibility also cannot be excluded that the decreased expression of hepatic MRP2 might be caused by repeated +Gz exposure-induced hepatocellular reperfusion injury. We hypothesized that reperfusion injury might occur when the blood supply returned to the liver after a period of ischemia or hypoxia due to +Gz exposure (i.e., during the intervals between centrifuge runs). This hypothesis is supported by previous data showing that the expression of MRP2 mRNA and protein was decreased in rat livers after hepatic reperfusion injury [15]. During hepatic reperfusion injury, Kupffer cells are activated and release proinflammatory cytokines, such as tumor necrosis factor-α, interleukin-1β and interleukin-6 [16,17]. These cytokines suppress the expression of several hepatic transporters, including MRP2 [18,19]. Further studies are necessary to clarify the relationship between the expression of MRP2 and pro-inflammatory cytokines in livers exposed to +Gz.

The views and opinions expressed in this article are those of the authors and do not reflect the official policy or position of the Republic of Korea Air Force. This work was supported by a grant of the Aerospace Medical Research Project funded by the Medical Division, Headquarter, Republic of Korea Air Force (2012). The authors thank medical librarian Ja Ok Kim for expertise in helping with the literature search and establishing keywords.