#Contributed equally to this work, and should be considered as co-first authors

Morus alba L. was used as Chinese traditional medicine for hundreds of years and its fruit, mulberry, has been proved to have high nutritional value and perfect healthy function [1]. The content of mulberry seeds was about 3%-5% in fresh mulberry. Studies showed that mulberry seeds contain about 29%-33% oil including not less than 80% unsaturated fatty acid, 21%-29% crude protein, 31%-37% dietary fiber, 6%-11% carbohydrate, and 0.03%-0.1% total flavonoids. Besides, there are many kinds of nutrient substances and biological active compounds in mulberry seed, such as vitamin E, Morin, polyphenol and many microelements [2]. The mulberry seed had the function of reducing blood lipid, anti-atherosclerosis and anti-oxidants [3].

The bioactivity of DNJ attracted more and more attention. Predominant sericultural resources such as mulberry leaves and silkworm contain many kinds of alkaloidals [4] such as DNJ, flavonoid [5] and polysaccharides [6], which could decrease blood glucose through inhibiting activity of α-glucosidase [7], repairing islet cells and stimulating insulin secretion [8], promoting the synthesis of liver glycogen [9] and promoting the uptake of glucose into body cells [10]. While the hypoglycemic effect of mulberry seeds have not been reported up to now.

Determination of the content of active compounds in mulberry seeds

The mulberry seeds were obtained from a hybrid variety sha 2×lunjiao 109. The fresh dry seeds were shattered by medicinal cracker, then sieved by 100 screen opening and preserved in 4°C. Some other mulberry seeds were germinated and sowed. The sprouted seeds, whole plant with cotyledon and the mulberry leave grown 15 d and 30 d respectively, were sampled respectively, and then dried under 60°C, shattered by medicinal cracker, passed through 100 mesh sieve and preserved in 4°C.

Inducing of diabetic mice: Healthy SPF Kunming mice (21-25 g) purchased from Taibang Biologicals Ltd. (Taian, Shandong, China) (certification number: SCXK (Lu) 2009-0608) were used in the study. The mice were maintained in a sanitary environment at a room temperature of 23-26°C and under a 12 h light/dark cycle. This study was approved by the ethics committee of Shandong Agricultural University.

Diabetic mice were induced using Alloxan. The model was made successfully if the Fasting Blood Glucose (FBG) was up to 11-25 mmol/L. Based on FBG the mice were divided into different groups among which the difference was not more than 2 mmol/L.

During the test period, the appearance, activities, body weight, food intake and water intake of each group were observed.

After feeding for four weeks, the mice then fasted for 12 h. Tail blood of the mice were collected to measure FBG and glycosylated haemoglobin (HbAlc). Two hours after feeding carotid blood of mice was taken to determine the Postprandial Blood Glucose (PBG). The mice were sacrificed and the weight of liver, kidney and spleen were measured immediately.

Then the liver was used to determine the liver glycogen content. The organ index was calculated according to the following formula:

Preparation of the aqueous extract of mulberry seed powder

Quantitative mulberry seed powder was weighed out and 10 times the volume of distilled water was added into it. The mixture was extracted for 24 h at 90°C in the backflow device then ultrasonic processed for 40 min and filtered to obtain the supernatant. The residue was extracted following the previous procedure. The supernatants were mixed, then concentrated by decompress and vacuum freeze-dried. The yield was 10.16% and the extract was stored in 4°C.

The test method is basically the same as glucose tolerance test except that the starch was given to the mice with a dose of 4.0 g/kg body weight instead of glucose.

The results were showed in Table 1. There was a high concentration of DNJ in mulberry seeds (0.6015 ± 0.0055%). With the development of mulberry seed and mulberry sapling, its DNJ contents were gradually reduced, and basically stabilized 15 days after sprouting.

Table 1: Change of DNJ content in development of mulberry seed and seeding.

The effect of mulberry seeds on blood glucose of diabetic mice

The test results were showed in Table 2. The FBG, PBG and HbA1c of MSP were significantly higher than NG but were significantly lower than MGP (decreased by 37.23%, 12.95% and 23.33% respectively). And the results of MSP had no significant difference with Acarbose group. The results indicted mulberry seed had significant hypoglycemic effect, and the hypoglycemic effect of feed adding 4% mulberry seed powder was close to routine dose of Acarbose. The liver glycogen contents of MSP, ACP and MGP had no difference between each other but were all significantly lower than NG, which showed mulberry seed did not promote the synthesis of liver glycogen.

The effect of mulberry seed on intake, drinking amount and organs indexes of diabetic mice

In all test groups the mice of NG showed the best state, they had shiny white fur, showed an active state and had the lest drinking amount and urination volume; while MGP was the worst in the previous aspects. The mice of ACP and MSP showed whiter fur, had less drinking amount and urination volume and showed more active state than MGP, which suggested that the mulberry seed could improve the behavior state, metal status and physiological state of diabetic mice.

We got the liver, kidney and spleen weight of mice in all groups by anatomy at 28th day, and got their viscera indexes (Table 3). All the results of MSP had no difference with ACP.

Table 3: Effect of mulberry seed on organ weight and index of model mice.

The liver weight, kidney weight, liver index and kidney index of MSP decreased by 13.35%, 13.20%, 36.56% and 35.86% respectively compared with than MGP, and the spleen weight increased by 31.74%. This showed mulberry seed could alleviate the injury of liver, kidney and spleen caused by diabetes.

The results of starch tolerance were shown in Table 5. At 30 m and 120 m after starch gavage, the blood glucose levels of AC, HMS and LMS were all significantly lower than MG, and the former two had no difference between them, and were both lower than LMS. The blood glucose level of HMS was decreased by 34.87% and 42.41% respectively at 30 m and 120 m than MG. The area under the curve showed the same pattern. This showed mulberry seed intake could effectively increase the starch tolerance of diabetic mice and its effect had relation with the dose. 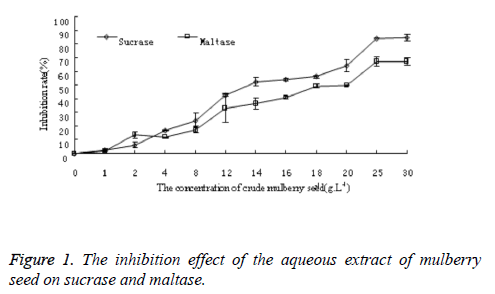 Figure 1: The inhibition effect of the aqueous extract of mulberry seed on sucrase and maltase.

Mulberry seed was determined to the best hypoglycemic effect than other parts of mulberry [14,15]. This suggested that adding 4% mulberry seed powder to the fed had equivalent hypoglycemic effect to Acarbose of normal dose on chemical diabetic mice, which could improve glucose tolerance and three-in-more and one-in-less symptoms of diabetic mice significantly, and reduce the injury degree of liver, kidney and spleen caused by diabetes mellitus.

The hypoglycemic substances of mulberry now known mainly include DNJ and other alkaloids, flavonoids and active polysaccharides [16]. In the results, the content of DNJ in mulberry seed was the most among all parts of mulberry tree, it was approximately 3-6 times than that in mature mulberry leaves, and about 1.5-2 times than that in mulberry stalks skin or silkworm powder [14]. The results showed that the mulberry seed extract significantly inhibited the sucrase and maltase with a dose-effect relationship. At the same time mulberry seed didn’t show obvious effect on promoting glycogen synthesis. All these results indicated that the hypoglycemic effect was related to DNJ with the high inhibiting activity on α- glucosidase.

Our study showed that mulberry seeds could improve the glucose tolerance of diabetic mice, which also indicated that the hypoglycemic effect of mulberry seed depend on the inhibit activity on α-glucosidase.

In summary, Mulberry seed not only has a high DNJ content and more significantly hypoglycemic effect than the mulberry leaf tea, silkworm powder, silkworm sand granules, but also is more secure. It could be made into a variety of food and health products so that the mulberry seed have a high value of use and development.