MRI characteristics of brucellar spondylodiscitis in cervical or thoracic segments

Purpose/Aim: The purpose was to determine the distinguishing of Magnetic Resonance Imaging (MRI) for brucellar spondylodiscitis in cervical or thoracic segments.

Results: The majority of patients had involvement of two contiguous vertebrae bodies at only a single spinal region. 41 vertebras and 21 discs were study in 20 cases. Cervical cases had a predilection in C4- C7 vertebral bodies. Thoracic cases were noted in the lower thoracic spine. 8 (40%) patients had paravertebra and 6 (30%) had paravertebral fester formation. 7 cases (35%) displayed epidural extension and epidural abscess were detected in 7 (35%) cases.

Brucellosis remains an important public health problem, with pandemic distribution as a zoonotic infection and endemic disease was due to Brucella. Brucellosis is the most common living in Osteoarticular and osteoarticular brucellosis was one of high incidence in the osteoarticular clinic, and the most prevalent manifestations are spondylitis or spondylodiscitis, particularly at the lumbar spine [1].

Brucellar spondylodiscitis may severely affect working ability and quality of life because the spine is the axial skeleton with a load-bearing support role. Furthermore, the genus Brucella is an intracellular microorganism often resulting in relapse, and is difficult to cure.

The cervical and thoracic spinal canal spaces are smaller than the lumbar space, but the spinal cord in the former segments is larger than that in the latter segment. Therefore, although cervical and thoracic spinal involvement is rare, it is relatively frequently associated with more severe complications of cord or root compression caused by epidural abscesses or granulomas [2]. Early diagnosis and appropriate management is of great significance in order to prevent the development of severe complications and diminish the need for surgical therapy [3].

In brucellar spondylodiscitis, Magnetic Resonance Imaging (MRI) is one of prior method for providing sensitive detection and more clearly demonstrates paravertebral lesions or epidural soft tissue spreading than other methods (although it is not perfect). The purpose was to determine the distinguishing brucellar spondylodiscitis in cervical or thoracic segments on Magnetic Resonance Imaging (MRI).

20 cases (15 men and 5 women) with a mean age or 50.3 y (range 32-63 y) with brucellar spondylodiscitis were chosen. The cases were taken from 260 patients with brucellosis between 2009 and 2014. All patients signed informed consent before enrolling in the study, and our study was approved by the Ethics Committee of Inner Mongolia Medical University.

Based on the presence of the following criteria to diagnosis of brucellar spondylodiscitis; First, epidemiological exposuring history to the bacterium, including contact with infected animal body fluids or tissues, consumption of unpasteurized dairy products or undercooked meat, and inhalation of aerosols in slaughter houses and laboratories. Second, patients presented with neck or back pain, myalgia, arthralgia, fever, fatigue, sweating, paraplegia, orchidalgia, inappetence, weight loss, chills, etc. Third, patients had a positive Rose-Bengal test and significant titers were determined to be ≥ 1/100 in the Standard Tube Agglutination Test (SAT). Fourth, an MRI was performed and yielded positive findings in all patients with corresponding history and positive serological tests of brucellosis.

Two radiologists and a diagnosis were made in consensus to all of the images. The following factors were assessed by MRI: (1) vertebral body morphology, whether complicated with destruction of bone, osteophytes, gibbosities, or angulation deformities; (2) vertebral body signal intensity on T2WI, T1WI, STIR, and T1WI contrast enhancement sequences; (3) disc signal intensity; (4) disc morphological changes or disc height loss; (5) involvement of epidural spaces and paravertebral soft tissues, location and number of vertebral body segments with abscesses or granulation of paravertebral or epidural spaces on the sagittal plane; (6) spinal cord involvement, complications of cord compression, and its signal intensity.

Table 1: MRI findings of 20 patients with brucellar spondylodiscitis in cervical or thoracic segments. 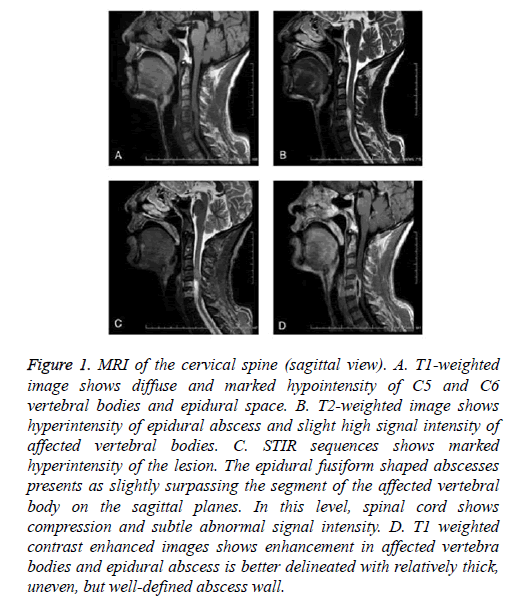 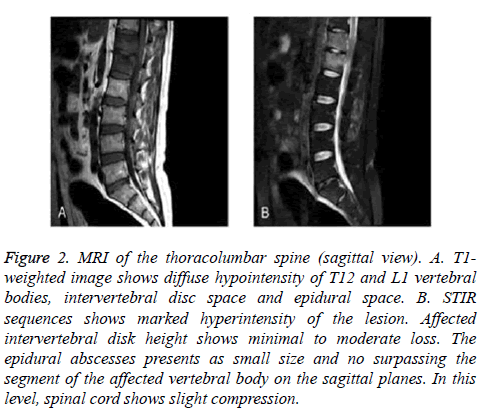 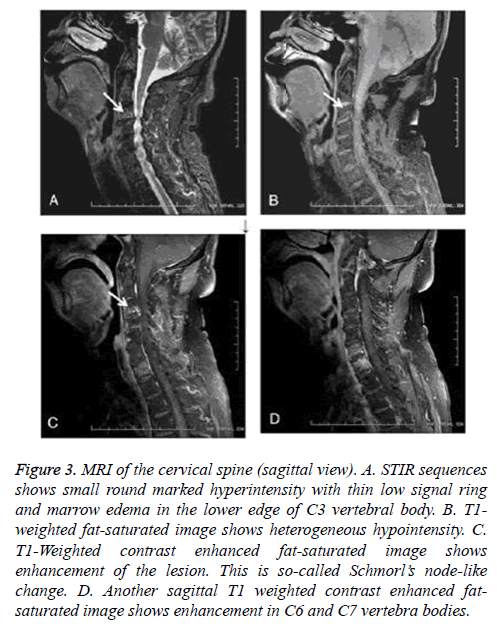 Although brucellosis is unusual and even eradicated in developed countries, it is a relatively common infection in geographic, for example: Middle East, Latin America, et al. For China, brucellosis is unusual in northern pastoral areas such as Inner Mongolia, has been increasing dramatically in recent years, because it is hyperendemic in domestic livestock. This infection has caused great economic and social damage.

In our study, the majority of patients had high risk occupations, such as nomads, slaughterhouse workers, and veterinarians. Most of our cases were middle aged and older, which is consistent with the literature. Common symptoms of brucellar spondylodiscitis, such as fever, sweating, fatigue, and arthralgia are not disease-specific, and mimic other infections. Clinical findings, non-specificity, and polymorphisms frequently lead to misdiagnosis and treatment delays, further increasing the complication rates. However, orchidalgia is a relatively specific symptom of brucellosis, and is at least suggestive of the disease as it is rare in other systemic infectious diseases. In their report, Turan et al. [4] reported that epididymo-orchitis was the third most common symptom of this disease. In the study, 5 patients were noted as having orchidalgia, which resulted in high suspicion of brucellosis in 3 cases after recognition of this relatively specific symptom.

MRI is the best methods radiological diagnosis of brucellar spondylodiscitis than bone scans, and CT images. Specific signs of brucellar spondylodiscitis of Radiographs about the spine during the course of the disease especially in the early stage were not shown. Due to scarcely specific and poor spatial resolution, a good definition of the lesions was not found by bone scan, although it is very sensitive in the early stages. CT imaging also shows disc space abnormal density and vertebral endplate destruction, but it is not good for delineating soft tissue involvement. For some advantages, MRI is better choice for the diagnosis of brucellar spondylodiscitis, in early stages, MRI scan was high sensitivity, It could good definition of the paravertebral involvement, epidural extension, and cord compression.

Osteoarticular manifestations are the characterized of Brucellosis. The lumbar, thoracic, and cervical regions were the sites of spinal involvement. These are in decreasing order of frequency, making thoracic and cervical spondylodiscitis rare [5,6]. In our cases, thoracic spine involvements occurred more often than cervical spine involvements, consistent with the literature [7]. Cervical cases had a predilection of C4-C7 vertebral bodies. Thoracic cases were mostly noted in the lower thoracic spine. Presence of the above involvements was similar to lumbar spine lesions, which showed predilection of the lower spine segment. The associated pathological mechanism is not clear and is considered to be related to the rich blood supply of this region. Endplate degeneration is more frequent in the lower spine region and this may be considered as another contributing factor.

Regardless of the type, 20 cases had no obvious collapse or gibbosity deformity. Of these cases, 12 had normal vertebral body morphology and 8 of them displayed minimal loss of height of vertebral bodies. In spinal brucellosis, vertebral body morphologies are almost always preserved. Scans showing no obvious collapse or gibbosity are one of the relatively specific signs of brucellar spondylodiscitis. In this way, spinal brucellosis differs from tubercular spondylodiscitis. Affected intervertebral disk height is also generally normal or shows minimal to moderate loss, but is not eliminated.

In our study, the lesions presented as relatively homogeneous or heterogeneous hypointense visuals on T1- weighted images and as hyperintense, isointense, hypointense, or heterogeneous signal changes on T2-weighted images in vertebral bodies. On STIR images, all lesions had different degrees of high signal intensities. They found that the long relaxation time of the bone marrow edema, inflammatory reaction, and the ischemic areas [9]. STIR sequence could reflect bone marrow edema and inflammation processes because it suppress the fat high signal more sensitive than T2WI. Contrast enhanced T1-weighted images excellently delineate lesions of the affected disc and vertebrae, especially paravertebral and epidural masses of brucellar spondylodiscitis. This is because contrast enhancement can more clearly show abscess walls and cavities compared with STIR. If we sort these methods according to the sensitivity of detecting lesions, T1WI contrast enhancement, STIR, T1WI, and T2WI appear in descending order. Therefore, T1WI contrast enhancement should be added to conventional examination if brucellosis is suspected.

It was well defined in the sagittal and axial images that extension of the epidural abscess within the spinal canal and paravertebral involvement. We noted that epidural extension were only located in anterior part of spinal canal and fusiform shaped epidural lesions usually did not surpass or slightly surpassed the segment of the affected vertebral body on the sagittal planes. This is markedly different from tuberculous spondylodiscitis which is accompanied by a wide range of abscess cavities. Therefore, the abscesses we have described may be another relatively specific sign of brucellar spondylodiscitis. Paravertebral abscesses may surpass the segment of affected vertebral bodies on the sagittal sections. Sometimes, epidural abscesses can be continuous with the infected discs or vertebral bodies.

Spinal cord compression was detected in 6 cases, 3 cases of which presented as swelling and slightly high signal on T2- weighted images and STIR images. Myelitis or myelopathies may develop during the course of disease due either to compression or inflammatory effects. Although cervical or thoracic involvement is rare, it is relatively frequently associated with more severe complications of cord compression caused by epidural abscesses or granulomas. Thus, early diagnosis and appropriate management is of great significance.

Schmorl’s node-like changes, noted in 5 patients, were located in endplates and mimicked Schmorl’s node of endplate degeneration. However, these regions had high signal intensities on STIR/T2WI sequences instead of low signals, and sometimes they connected with involved discs, which represent bone inflammatory and destructive processes. In our opinion, this may be another specific sign of brucellar spondylodiscitis, which has not been clearly reported in the literature to our knowledge.

In our study, abscess walls, particularly those of epidural abscesses, were relatively thick, uneven, and irregular, but are well-defined. Abscess cavities were small compared with tuberculous spondylodiscitis. Different size, but usually relatively small multiple abscess cavities were regularly observed in the soft tissues. These features were best visualized when fat-suppression techniques were applied to the contrast enhanced images [11].

In published data, the acute stage has been reported to vary from 2 w to 3 months [13,14]. In our practice, we have noted that the MRI finding is negative in some brucellosis patients with evident back pain. The above issues result in that brucellar spondylodiscitis accurate staging was not performed in our study. Pathogenesis mechanisms and their corresponding relationship with images needs to be further researched.

This study has some limitations. Firstly, the sample size is relatively small due to low incidence. Secondly, isolation of Brucella from blood, bone marrow, or other tissues were the confirmative diagnosis of brucellosis commonly which is, difficult as it is an invasive method that is time consuming and possesses a low positive rate, thus it is not practical for clinical purposes. Thirdly, contrast enhanced images were obtained only in some patients.

Paravertebral and/or epidural masses and neurological involvement are relatively more common in patients with cervical or thoracic spondylodiscitis than those with lumbar spondylodiscitis. MRI and serological examination should be performed immediately in order to quickly diagnose, and appropriate management should be undertaken as soon as possible so as to avoid severe complications. Especially when considering rarely involved spinal regions. The best methods of preferred modality for diagnosis and assessment of complications of the patients is MRI. MRI combined with epidemiological history, clinical presentation, and serological testing can usually accurately diagnose the disease.

No conflicts of interest. We are responsible for the content and writing of the paper.