Objectives: Chronic Otitis Media with Effusion (COME) is a clinical condition characterized by an effusion in the tympanic cavity. In this retrospective study, we aimed to compare the MPV and PDW value of patients with chronic otitis media with effusion (COMA) to those in healthy subjects as an inflammatory indicator.

Results: We included 149 patients who underwent ventilation tube insertion between with those of age and sex compatible 151 healthy subjects into the study. In our study no statistically significant differences were identified between paediatric patients diagnosed with COME and healthy controls in terms of WBC, RBC, Hb, Hct, and MPV levels (p>0.05). However, we found significant differences both the platelet count (p<0.05) and PDW levels (p<0.001) between the COME and control group.

Conclusion: This study is the first to evaluate the relationship between PDW and COME. With regards to clinical and laboratory findings, novel inflammatory markers derived from routine hemogram test may be used.

Otitis media with effusion is a middle ear inflammatory disease. A variety of potent inflammatory mediators has been detected in middle ear effusions of children with OME [1].

Chronic Otitis Media with Effusion (COME) is a clinical condition characterized by an effusion in the tympanic cavity lasting longer than 3 months without an acute infection. Otitis media with effusion, a term synonymous with chronic nonsupportive otitis media, secretory otitis media, serous otitis media, and glue ear, is one of the most common chronic ontological conditions of childhood period. Thus, this condition can lead to the impairment of children’s development of linguistic, behavioural, motor, and social skills [2-4].

If left untreated, it causes atelectatic tympanic membrane, adhesive middle ear disease, and cholesteatoma development, which may lead to a permanent hearing loss. Platelets have a critical role in homeostasis and tissue repair [5-7]. Moreover, recently it has been discovered that platelets also have a role in the inflammatory process. Platelet cytoplasmic granules contain several inflammatory products, including the Platelet Activation Factor (PAF), Platelet-Derived Growth Factor (PDGF), Platelet Factor-4 (PF4), beta-Thromboglobulin (b- Tg), Interleukin-1 (IL-1), leukotrienes, and prostaglandins [8,9]. Increased platelet activation plays an important role in the development of inflammation and it was found that platelets significantly contribute to chronic inflammation, and MPV may be used as a marker of inflammatory disease [10-12].

Mean Platelet Volume (MPV) and Platelet Distribution Width (PDW) are routine hematologic parameters used to measure and understand platelet activity. Young platelets with large volume have intense granules in their cytoplasm; enzymatically and metabolically they are much more active [13]. Since increased platelet activation has an important role in the inflammatory process, it can be used as an indicator of inflammation [10-12,14,15]. PDW shows differences in the size of platelets in circulation; an increase in the PDW level indicates that there are more different sizes of platelets in circulation, while a decrease in PDW indicates that there are more similar sized, old platelets in circulation [16].

In the present study, we have investigated the role of MPV and PDW as an inflammatory indicator in 149 paediatric patients with COME.

The MPV and PDW parameters were collected retrospectively from the files of 149 paediatric patients who underwent ventilation tube insertion operation for COME between December 2009 and December 2015. Patients with chronic inflammatory diseases, active infection, diabetes mellitus and malignancy were excluded. Subjects on treatment with an agent that may influence CBC parameters, such as aspirin or steroid, were also excluded. Control subjects were selected from healthy volunteers who visited outpatient clinics of our hospital for a routine check-up.

The blood samples were collected in sterile tubes containing a fixed amount of anticoagulant and analyzed in several minutes with ABX Micros automatic hematologic analyzer (ABX Micros: HORIBA, California, USA). Patient files were analyzed from the archives of the hospital computer automation program. Demographic features, namely age, race and gender; and laboratory parameters, i.e. White Blood Cell count (WBC), Red Blood Cell count (RBC), Hemoglobin (Hb), Hematocrit (Hct), Platelets (PLT), MPV, and PDW, were obtained and compared with those of the control group. Approval for the study was granted by the Hospital Ethics Committee. Data were analyzed using SPSS for Windows. Variables of qualitative data were expressed as numbers and percentages, while variables of quantitative data were expressed as means or min-max ranges. To compare the groups for the categorized variables, Mann-Whitney U test was used for the quantitative variables. A p-value less than 0.05 are considered as statistically significant. 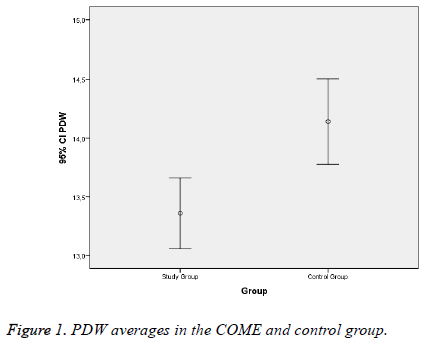 Figure 1: PDW averages in the COME and control group.

Table 1. The parameters of sex, age, and hematologic findings in the COME and control groups.

In this study, we have evaluated COME and its association with MPV and PDW in paediatric patients. The main finding of this study was inflammatory markers derived from routine CBC tests useful for differentiation of patients with COME from healthy subjects. COME is an inflammatory disease of the middle ear. Eustachian tube dysfunction, adenoid hypertrophy, viral and bacterial infections, and allergies are important etiologic factors.

The inflammatory cells that infiltrate the middle ear mucosa secrete pro-inflammatory products like PAF, prostaglandins, leukotrienes, histamine, TNF-α, interleukin-1β, and interleukin 8 [17-20]. These inflammatory cytokines have been determined in both animal and human clinical studies [18,21,22]. Recently, it has been reported that platelets have a role in diseases characterized by systemic inflammation, and increased MPV may be used as a marker of inflammation [23-25]. In studies made with patients who have an inflammatory disease, such as rheumatoid arthritis, psoriasis, ankylosing spondylitis, and nasal polyposis, increased MPV values have been observed [24,26,27]. Sagit et al. reported that the MPV levels of nasal polyposis patients were significantly higher than those in the healthy control group [27,28]. Apuhan et al. described that decreased MPV in nasal polyposis was a statistically significant difference between study and control groups [29]. Thus, there are discrepancies in recent studies regarding levels of MPV in terms of inflammation and infection. Somuk et al. reported no statistically significant differences were identified between paediatric patients diagnosed with COME and healthy controls in terms of MPV levels [30]. Platelet distribution width is an indicator of platelet size heterogeneity. A high PDW value suggests a large range of platelet sizes due to swelling, destruction, immaturity, and high reactivity. In the recent studies of Ozturk et al. PDW has been found to be associated with several clinical situations [31]. In the literature review, high PDW levels were found in coronary artery disease, benign paroxysmal positional vertigo, pulmonary embolism, acute gangrenous appendicitis, obstructive sleep apnoea syndrome, preeclampsia, and preterm labor, in patients with nasal polyposis [32,33]. Ozturk et al. studied 175 patients with inflammatory bowel disease and found that there was a statistically significant decrease in PDW levels during disease exacerbation compared to healthy control subjects [31]. Ulu et al., in their study of 40 idiopathic sudden sensorineural hearing loss cases, reported that both the MPV and PDW levels were significantly higher in the study group compared to the control group [34]. In a study of 160 acute gangrenous appendicitis patients, it was reported that PDW was a much more accurate diagnostic test than MPV [35].

In our study, the platelet count was higher in the study group (p<0.05). The PDW level was lower in our study group than in the control group (p<0.001). We think that middle ear disease with effusion is a localized inflammation and it has no impulse effect on bone marrow to produce young and active platelets.

Although our study has a limitation due to retrospective character, it has shown that the increase in PDW levels was an inflammatory sing in COME. In the case of high PDV level in adenoidectomy operation, care should be taken for inflammation. So, MPV and PDW data might be useful as an additional inflammatory marker of COME. Thus, prospective and controlled studies are needed to confirm PDW level as an additional marker in COME patients.

No conflict of interest was declared by the authors.

The authors declare that this study received no financial support.

This information was obtained retrospectively from the archives of the hospital’s computer automation program. The study was conducted with data from human beings.