The animal model has been widely used in the biomaterials field. However, there are no morphometric patterns to create critical size defects in different areas used in implantology and oral surgery, based on the anatomy and histology of the rabbit’s tissue. Thus, the aim of this study is to provide measurements and limits for future research on the different anatomical regions used to evaluate biomaterials and/or surgical procedures in rabbits as animal models. Twenty-two rabbit heads were used in the study. The soft tissue was removed and the calvaria, body of the mandible divided into three regions, the ramus of the mandible, total mandible length and lower cortical sinus thickness were measured. The mean, standard deviation and confidence of each region were recorded. The height of the mandibular ramus was 30.1 mm and 29.7 mm for the right and left sides, respectively, while the total body of mandible was 67.2 mm. Also, the thickness of calvaria and lower cortical sinus were 1.5 mm and 1.1 mm, respectively. In conclusion, the limited dimensions of anatomical structures should be considered when working with critical size defects in rabbits to avoid complications or accidents during the specimen’s surgery.

The development of bioactive materials for tissue engineering has increased considerably for use on in vitro and in vivo models [1]. Accordingly, the animal model has been widely used in the study of biomaterials, placed in critical size defects, to analyse their influence [2]. The literature shows the use of dog [3,4], rat [5] and rabbit models [6], among others, to study bone healing.

Among the different animal models, one of the most frequently used is the rabbit due to low cost, easy manipulation, high bone metabolism and quick craniofacial development [7]. Research focused on bone healing in rabbits was conducted in different regions of the mandible [8] and calvaria [9]. However, the anatomy and size of each region of rabbit skull and mandible may influence the number of critical size defects.

The applied anatomy enables the clinician to identify details of relevant structures intraoperatively [10]. In this context, a study by Valdivia et al. [11] reported some measurements of rabbit mandible after transection of inferior alveolar nerves in growing rabbits. Despite the large amount of information available in the literature, there are no morphometric patterns to create critical size defects in different areas used in implantology and oral surgery based on the anatomy and histology of the rabbit’s tissue that would enable exact repeatability of methodologies and rendering more reliable results. Therefore, this study aims to provide measurements and limits for future research on the different anatomical regions used to evaluate biomaterials and/or surgical procedures using rabbits as animal models.

The following study was approved by the Ethics Committee of the Faculty of Ribeirao Preto Dental School, University of São Paulo (Protocol 055/2012).

Twenty-two rabbit heads discarded from other research that were not included or have not caused metabolic bone diseases were used to conduct the study. The samples, which included male and female specimens, were treated previously by enucleating the eyes and removing the skin and most of the muscles. After this, the samples were immersed in hot hydrogen peroxide (130 vol, Mazzochini, Caxias do Sul, Brazil) at 80ºC for 2 h and maintained at 37ºC for 48 h to remove the remnants of organic tissue. Subsequently, the samples were washed with distilled water and dried.

The measurements were taken using a digital calliper (Bull Tools® 0-150 mm, Echain, Taichung, Taiwan) in the following regions (Figures 1 and 2): 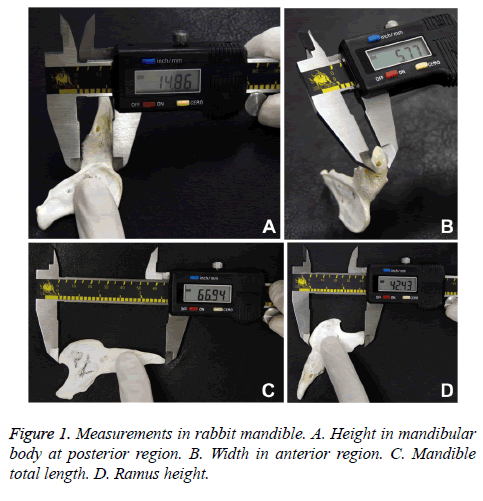 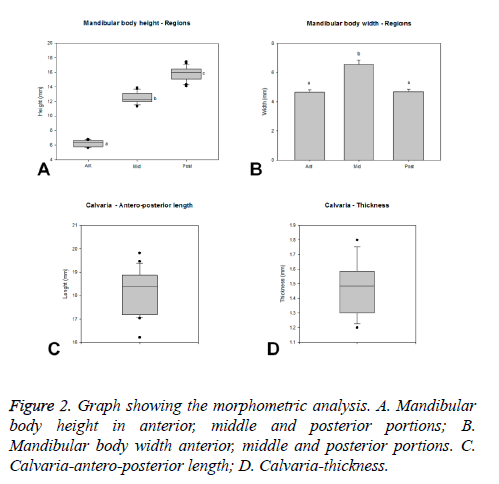 - Calvaria: Latero-lateral, antero-posterior and its thickness.

- Body of mandible divided into three regions, measuring the maximum height and thickness:

- Ramus of mandible by side: maximal length, height and thickness.

The measurements of each region were organized in tables, recording the mean, standard deviation and confidence interval. In the morphometric analysis of mandible, the height and width of the three assessed regions (anterior, middle and posterior) were compared. For the height, the Kruskal-Wallis test was used, with a Tukey post-test (p=0.05), due to the nonnormal distribution. The ANOVA test with the Holm-Sidak post-test (p=0.05) was applied in the analysis of the width, due to the normal distribution of this data.

The morphometric parameters of calvaria (latero-lateral, antero-posterior and thickness) were recorded in boxplot graphs to help understand the data distribution.

The mean, standard deviation and confidence interval of mandibular body, ramus and calvaria were summarized in Tables 1-3, respectively.

The measurements of total body of mandible showed a mean of 67.2 (±2 mm) with a Confidence Interval (CI) of 66 to 68.4 mm (Figure 1C). The mandible body had significant heights differences (p<0.05) in the three portions evaluated (medians: anterior-6.32 mm; middle-12.2 mm; posterior-16.02 mm), being possible to identify increasing values from the anterior to posterior regions (Figure 2A). 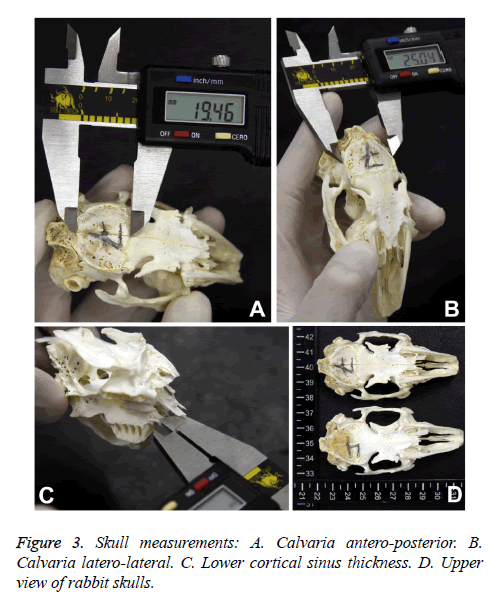 Animal model studies have been widely used in the literature to investigate bone regeneration through different bone grafts, testing these bone substitutes in regions such as the calvaria and mandibles of rabbits, rats, pigs and dogs [12-15]. However, the amount of bone formation could not be compared because the defects are made in specific sites not comparable between species.

Some studies have tested biomaterials in critical defects of calvaria [6,16,17]; i.e., those that do not heal spontaneously. Some studies have reported sufficiently large calvaria for the creation of four 8 mm defects each [17-19]. However, if two defects in the anteroposterior direction, with a safety margin of 1 mm between them, theoretically measure 17 mm, there may be a bias if the intracranial suture distance is not respected, as the mesenchymal cells can influence the results and behavior of the defects [20,21], without necessarily depending on the biomaterials tested. In this study, the average anteroposterior length of rabbit calvaria was 18.2 mm and 26 mm in a laterolateral direction, which may limit the creation of four critical size defects, because in the anteroposterior at least 19 mm is required, not including the sutures, considering 1 mm between the frontal-parietal or coronal suture, 1 mm between the defects, and 1 mm from the parietal-occipital or lambdoid suture. Therefore, the size of the rabbit calvaria and the distance of the sutures in the specimens should be assessed prior to creating the defects. Another important factor is the intraoperative drilling accidents of the brain with the trephine bur during the preparation of the defect, so an average thickness of approximately 1.5 mm should be considered.

The experimental model of external transcutaneous sinus lift in rabbits has been widely described in the literature [22,23], and was first described by Watanabe et al. [24]. They reported the low cost and easy distinction of membrane perforation among others as advantages of this model. However, a few studies performed an internal approach [25], which mainly focused on studying the response of various bone graft materials, regardless of the maxillary sinus floor thickness, where surgical windows of different sizes were made [26]. In our study, the thickness of the maxillary sinus floor has an average of 1.1 mm, and it is suggested that this be taken into consideration at the time of surgery.

Related to studies on the mandible ramus, the 44 mm in height observed in this study are similar to the values reported by Abreu et al. [7] (39 mm). However, Monfared [10] observed an average of 29 mm in ramus height, identifying a large discrepancy between these values. Some authors have reported research using ramus non-critical size defects of different sizes [27,28]. Whatever the size of the defect, an average cortical thickness of 1.3 mm should be considered, so we recommend that the defects be performed with 1.2 mm in depth and with a safety margin of 0.1-0.2 mm. In this context, the mandible ramus is a complex region to perform experiments in a rabbit model, both due to its difficult access and thin bone thickness. Therefore, the two most common areas to test biomaterials in the mandible are the angle and body [29].

In relation to the dimensions of the mandibular body, an average of 67 mm was identified as being less than the 75 mm reported by Monfared [10] in a sample of eleven rabbits. The greatest bone thickness in the mandibular body was found in the middle region, anterior to the first molar, which is ideal for the placement and study of dental implants due to its size. Shah et al. [29] concurred with this statement, describing that this area allows an easy surgical approach. The anterior and posterior region showed a similar thickness of 4.7 mm. The bone height increased posteriorly, mainly due to the mandible’s anatomy. Eleftheriadis et al. [30] created defects of 8 mm long × 3 mm wide × 3 mm deep in the middle region of the mandible, proving this to be a safe area to perform surgeries. However, Shah et al. [29] detailed in their research that a full thickness defect of 10 mm in the molar/premolar region does not heal spontaneously and it acts as a critical size defect.

This study has some limitations, such as the measurement of anatomical structures in a single species of rabbit and the sample size, among others. However, we believe that it provides valuable information to be used for studies on a rabbit model when it is used with the confidence interval. Despite these limitations, it is possible to create an experimental environment for bone graft substitutes following a surgical bone protocol that is able to emulate clinical conditions [10]. Further studies are needed with a larger sample and in different species.

The limited dimensions of anatomical structures should be considered when working with critical size defects in rabbits to avoid complications or accidents during the specimen’s surgery.