In this study, obtaining reference ranges for fetal penis length, penis diameter and femur lengt were aimed. The study was conducted on fifty male fetuses ranging between 14 and 37 weeks of gestational age which was determined using CRL measurement, belonging to Meram Faculty of Medicine, University of Necmettin Erbakan. Data related to penis length, penis diameter and femur length among male fetuses were determined. In 2nd and 3rd trimesters, mean values were calculated 6.62 ±3.06 mm and 16.58±4.82 mm for penis length, 3.39±1.38 mm and 7.99±2.07 mm for penis diameter, and 40.72± 9.48 mm and 73.52±11.58 mm for femur length, respectively. The data were increased by gestational age at rates of %70 (r2=0.69), %81 (r2=0.81), and %90 (r2=0.89), respectively. The relationship between gestational age and all those parameters were statistically meaningful (p<0.01). The reference ranges were determined using the Least Squares regression analysis as follows:

A normogram belonging to fetal penis was formed which may help to clinicians during ultrasonographic diagnose of genetical anomalies, endocrinological problems and fetal gender determination.

Discerning the sex of a fetus before birth is important to not only satisfy the curiosity of parents but also to followup the development of normal fetal gender during the prenatal ultrasonographic [1-2]. In addition, the early diagnosis of developmental defects related to fetal genitalia may guide to physician to identify some anomalies such as genetic disorders or endocrinological problems. More than 70 possibilities of genetic / chromosomal abnormalities can be considered in a common condition like ambiguous genitalia, micropenis/hypogenitalism [3-6]. Various abnormalities such as hypospadias, ambiguous genitalia and cloacal abnormalities related to fetal perineum and phallus have been defined via sonographic imaging in prenatal period [7-9]. Determining the gender is highly important in lower urinary tract anomalies, particularly for intrauterine diagnosis and course of bladder outflow obstruction [10]. The aim of this study is to evaluate morphometric aspects of fetal penile development and form a reference range for dimensions of fetal penis and femur.

This study has been conducted on fetus collection of Department of Anatomy, Meram Faculty of Medicine, University of Necmettin Erbakan. Fetuses with abnormal genitourinary system and morphological anomalies that can be diagnosed by inspections were excluded. After receiving approval from the Institutional Review Board (Ref: 2013/349), 50 male fetuses ranging from 14 to 37 gestational weeks (37 second trimester – 13 third trimester) were classified according to the age determination method of Polin and Fox [11]. Measurements were taken three consecutive times by one person. In order to reduce the errors belonging to measurement technique, mean values were calculated by using readings that were taken from each fetus individually. Digital caliper was used to measure dimensions. Penis length; while penis being positioned with an angle of 90 degrees, was measured from tip (glans penis) to the point where it joins scrotum (radix penis) [12]. Penis diameter; was measured from the thickest point in the same position mentioned before. Femur length; the distance between the tip of the major trochanter and the lowest point of the lateral condylus was measured (Figure 1).

The obtained data were evaluated by using SPSS 15.0 (Statistical Package for Social Sciences). Data were analyzed by both descriptive (mean value, standard deviation, maximum and minimum values, percentages) and quantitative statistical methods. Results were evaluated statistically in %95 confidence interval and differences were accepted significant if p<0.01.

Table 1: Minimum, maximum and mean values of the obtained data according to trimesters (mm) and total data.

Table 2: The correlation between the measured parameters in 2nd trimester fetuses.

Table 3: The correlation between the measured parameters in 3rd trimester fetuses.

Table 4: The correlation between the measured parameters in all fetuses. 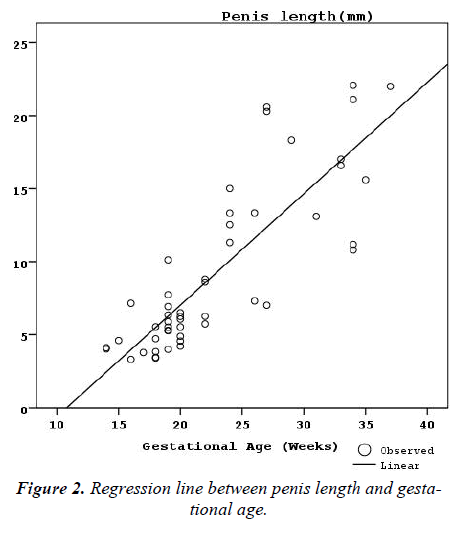 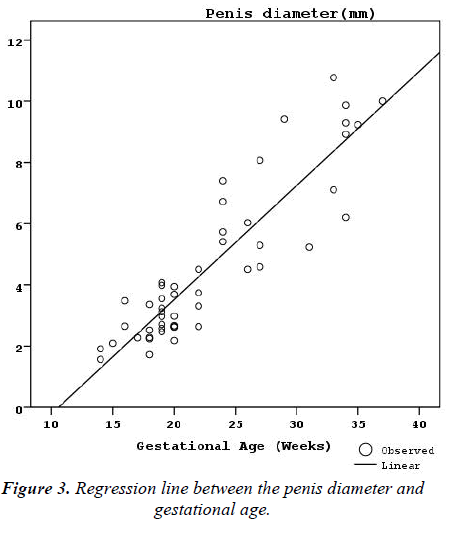 Figure 3: Regression line between the penis diameter and gestational age. 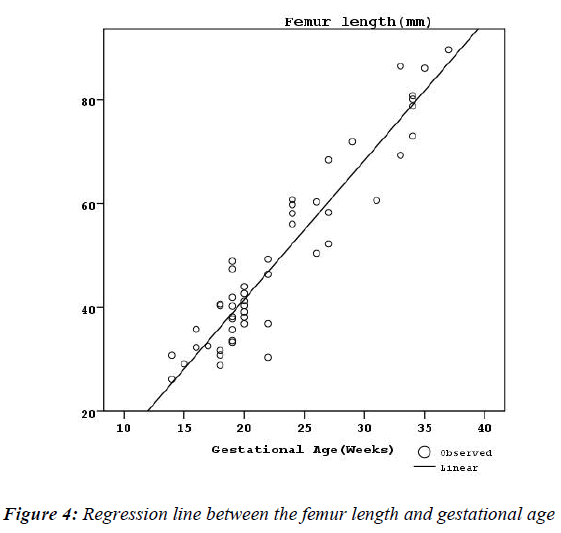 Figure 4: Regression line between the femur length and gestational age

In fetal gender assignation, ultrasonography is an important tool. In our study, series of normal penis length were obtained from fetuses ranging between 14 and 37 gestational weeks since masculinization of external genital organs starts at 14th week of gestational age according to previous sonographic studies [2,12-15]. The scale of the normal values related to penis for various gestational weeks is important to diagnose male genital developmental disorders such as genitourinary system anomalies, hormonal defects and genetic syndromes [12].

The penis size has been a subject of interest and research of many people through penile sizes becomes the center of focus during the history of humanity. In addition, since it is considered as a taboo and privacy in society, it attracts many researchers and becomes a research topic, it still remains as an unclear mystical topic [10,12,13,15-20]. Micropenis, is a term which is used to define unusually small but structurally normal penis [21]. Penis length less than 2.5 standard deviation is widely accepted as the criteria to define micropenis [21-22]. There are studies that investigated the effects of ethnicity to the definition of the micropenis. Phillip et al. [16] reported that penis length did not show a significant difference related to ethnic origins among 268 Jewish and Bedouin male newborns (2 and 3 days old). According to their study, the mean penis length in Jewish and Bedouin newborns were 36.1±4.4 mm and 37.1±4.7 mm, respectively. Nevertheless, Lian et al. [17] demonstrated that there was a significant difference for the length of penis between two ethnic origins in the study which was conducted on Indian and Chinese infants. The penis length and diameter were measured on 105 newborns (from 38 to 42 weeks of gestation) with various ethnic origins by Cheng and Chanoine [18]. The mean data of penis length and the penis diameter for Caucasian, Chinese and East India newborns were 3.4 cm, 3.1 cm, 3.6 cm and 1.13cm, 1.07cm, 1.14cm, respectively. Ting and Wu [19] studied the stretched penis length and testicle volume on 195 Malaysian, 129 Chinese and 16 Indian full-term newborns and the mean length of penis was found 35.2±3.9 mm, 35.2±4.0 mm, and 37.5±4.5 mm, respectively.

Zalel et al. [12] observed using ultrasonography that the penis length was 3.88 mm and 23.77 mm at gestational ages of 14th and 38th weeks, respectively and found a positive correlation between gestational age and length of penis. In the same way, the mean fetal penis length was measured as 6 mm and 26.4 mm at gestational ages of 16th and 38th weeks by Johnson and Maxwell [10] and it showed a significant increase with gestational age. Feldman et al. [15] measured the stretched length and diameter of penis on 76 normal premature and 37 full-term newborns and found mean values of 3.5±0.7 cm and 1.1 ±0.2 cm among subjects, respectively. Although many methods have been tried to measure the penis length, it was observed that the most useful and repeatable measurement was in the stretched position. In our study, the mean penis length was measured between 3.31mm and 22.07mm among 50 male fetuses ranging from 13th to 37th gestational weeks. Johnson and Maxwell [10] stated a significant increase in penis length with increasing gestational age (p<0.005) in a study which was conducted on 95 normal fetuses belonging to 16th-38th gestational weeks. The formula of regression for the mean penis length was 4.1754 – 0.2198 x age + 0.0212 x age2 and formula of standard deviation was SD = 0.0097 + 0.0818 x age.

As stated earlier we found that penis length, diameter and femur length increased significantly with gestational age (p<0.05). Besides, the regression formulas for penis sizes and femur length were detected as seen in the following table (Table 5). The relationship between penis length and various body parts was investigated in many studies. No connection was found between two parameters in a study which examined the relationship of penis length with foot length [24]. In another study conducted on Greek males, the penis length was found longer in cases with the longer index finger. Height, weight, and body mass index found to be related with penis length in Italian population [25,26].

In our study, we found that there was a strong correlation among the parameters of fetal penis length, diameter and femur length (P<0.05) and the relationship between penis diameter and femur length (r2=0.957) was stronger than between penis length and femur length (r2=0.892). A nomogram for fetal penis sizes, being useful for early diagnosis of genital developmental disorders, anomalies related to genitalia, genetic and endocrinological problems, was created as a result of this study. We believed that this nomogram will be helpful for situations related to genital developmental disorders and termination of pregnancy.

The authors wish to thank to the donors for the fetuses used in the study.

The authors have no conflicts of interest.

This study conformed to the Helsinki Declaration.