Dorsal root ganglion (DRG) contains primary sensory neurons which are said to be het-erogeneous with respect to their morphological, functional and neurochemical character-istics. Literature regarding their light microscopic features for their categorization in dif-ferent subsets remains inconclusive. The present study was attempted to see as to what ex-tent neuronal subsets of DRG can be appreciated by routine histological techniques and if there still exist some neurons with atypical features. In the present study 5 rabbits of ei-ther sex were perfusion fixed either by 10% formalin or Karnovsky’s fixative. Cervical DRGs from both sides were procured and processed for paraffin embedding. 10 μm-thick sections stained with Haematoxylin and Eosin were observed under light microscope. It was noticed that DRG neurons are arranged in groups interspersed among the fascicles of nerve fibres. They appear round or oval in shape, ranging in sizes from 15 to 75 μm in cross section, and each being surrounded by 3 to 15 satellite glial cells (SGCs). Sensory neuron is characterized by large centrally placed euchromatic nucleus and prominent nu-cleolus (1 to 3 nucleoli per neuron). Features of most of the neurons matched with those of typical neuronal subsets described by different workers (1, 2, 3, and 4). However, a very small population of neurons presented atypical features e. g; a) large cell body with coarse Nissl granules forming a prominent perinuclear ring; b) large neuron with a pyramidal or triangular somatic outline (90/50 μm); c) neuron having eccentrically placed nucleus; d) a couple of neurons sharing common SGC-sheath. It was concluded that even by routine histological techniques in addition to typical neuronal subsets some neurons having atypi-cal features can also be recognized which require appropriate categorization in accor-dance with their ultrastructural, neurochemical and functional characteristics.

Mammalian sensory ganglia in general and DRGs in par-ticular, have been the focus of intense research because of their importance in the transmission of sensory signals and their contribution to acute and chronic pain syndromes.

DRG consists of a heterogeneous group of primary sensory neurons. Many subpopulations have been identified on the basis of their light microscopic morphology [2], ultra structure [1,5], neurochemical and immunocytochemical [6-9] and electrical and functional properties [10,11], their relative sensitivity to certain harmful agents [3], and their involvement in some pathological conditions [4].

Each DRG neuron is surrounded by a sheath formed by SGCs. These cells are in close contact with the neurons and play multiple roles both in health and disease but their many functions still remain to be understood. There is evidence that satellite cells undergo both morphological and biochemical changes after nerve damage [12,13], but there is paucity of information on their possible contribu-tion to pain mechanisms. The present study aims at look-ing for the possible existence of morphologically atypical DRG neurons that can be identified by routine light mi-croscopy.

5 adult healthy rabbits of either sex, aged between 12 to 15 months, and weighing on average 1.5 Kg each were included in this study. Under deep general anaesthesia, they were fixed by intra-cardiac perfusion method using either 10% buffered formalin or Karnovsky’s fixative. Cervical part of spinal cord and associated dorsal root ganglia of both sides were dissected out. DRG from each spinal segment was processed separately for paraffin em-bedding. Serial 10 μm-thick sections were cut by rotary microtome. Haematoxylin and Eosin stained sections were observed under light microscope. Salient findings were recorded primarily under high power and occasion-ally under oil immersion.

The DRG contains two main types of cells namely neu-rons and glia. Neurons are larger and more prominent and lesser in number while and glia cells are smaller in size, more numerous and surround each neuron. Clusters of neurons are interspersed among nerve fascicles (Fig. 1). In cross sections, the neuronal clusters appear to assume dif-ferent size and shapes. Almost all nerve cells are circular to oval in outline and are of variable size ranging from 15 to 75 μm in diameter. Each cluster of neuron possesses cells of different size and there appears to be no specific pattern in their arrangement. Neuronal cell is characterized by large centrally placed euchromatic, vesicular nucleus and prominent nucleolus. The number of nucleoli per neu-ron ranges from 1-3. The perikaryon is filled with Nissl substance which assumes different appearance in terms of its overall amount, distribution pattern, size of granules, and intergranular space. Features of most of the DRG neu-rons match with those described by different workers [1-5] for various subsets of neurons. 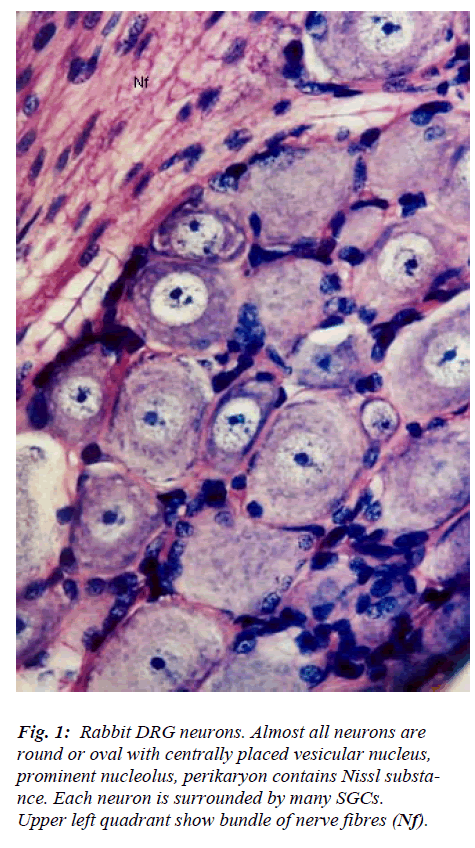 However, few neurons (Figs. 2,3,4,5) in the present study revealed remarkable atypical features which do not fully match with the findings of aforesaid workers. For example – large size neuron with coarse granule Nissl substance arranged in the form of a prominent perinuclear ring and thus leaving the peripheral part of soma almost free of Nissl substance (Fig. 2). Occasionally, a large neuron was noticed to possess a triangular or pyramidal somatic outline with most of the other features remain similar to a typical sensory neuron (Fig. 3). Contrary to the most common pat-tern of having central nucleus some neurons are seen to possess eccentric nuclei (Fig. 4). Normally, each neuron is surrounded by SGCs which actually form a sheath and thus each individual neuron along with its SGCs can be identi-fied as isolated units. But sometimes two medium sized or small neurons are seen to be placed so closely that part of SGC-sheath between adjacent neurons can not be resolved even at higher magnification and it appears that both neu-rons are housed inside the same capsule (Fig. 5). As seen in the cross section, the number of SGCs involved in making the perineuronal sheath varies with the size of neuronal cell body ranging from just 3 around small neuron to 15 around large neurons. The cytoplasm of SGCs can also be seen but only occasionally (Fig. 2). 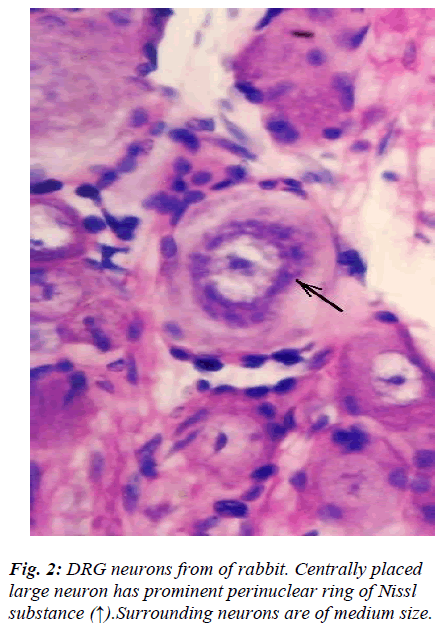 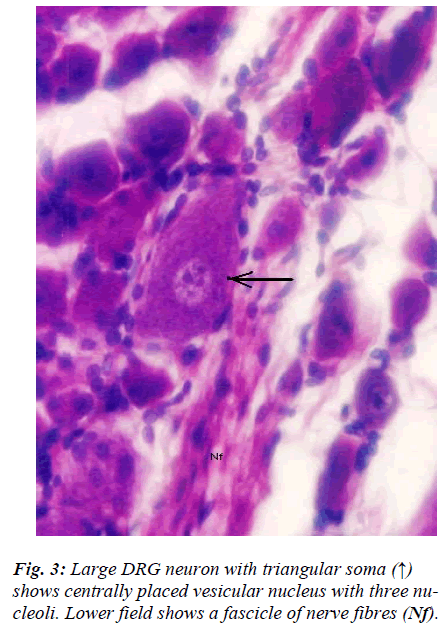 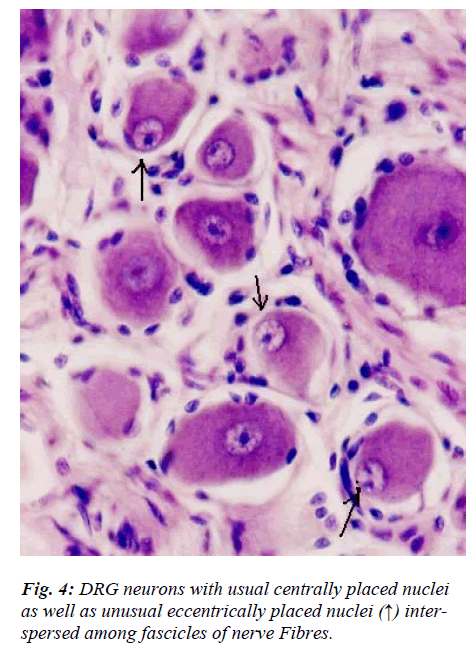 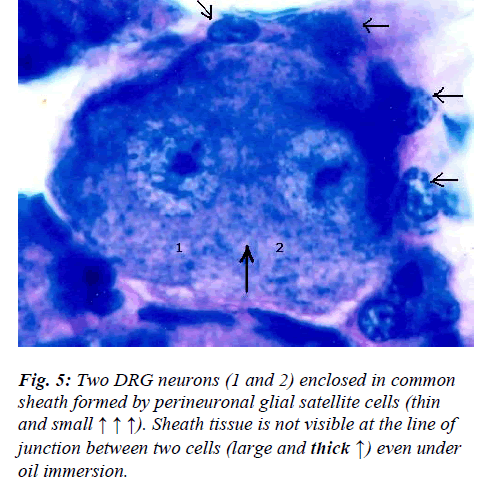 Figure 5: Two DRG neurons (1 and 2) enclosed in common sheath formed by perineuronal glial satellite cells (thin and small ↑ ↑ ↑). Sheath tissue is not visible at the line of junction between two cells (large and thick ↑) even under oil immersion.

Sensory neurons in DRG are anatomically, functionally, and neurochemically diverse [1-5]. In the present light microscopic study only morphological criteria were taken for identification and classification of DRG neu-rons. Literature on neurons of cervical DRG of rabbit is scanty and therefore the findings of the present study be-ing compared with low power electron-microscopic fea-tures of DRG neurons of rat [1]. The light microscopic features of almost all DRG neurons fell within one or the other groups (A1, A2, A3, B1, B2, and C) of rat lumbar DRG [1]. However, few neurons revealed features which did not match with those described previously. In general, there is good correlation between form and function and DRG neuronal cell body size and axonal conduction ve-locity are generally positively correlated. Though, the generalization that large cells give rise to myelinated ax-ons and small cell to unmyelinated axons has been claimed to be oversimplification as it may not be true for the intermediate size of cells [2]. Differential susceptibil-ity of DRG neurons and their atrophy in various experi-mental studies [3,4,14,15] may be the morphological ba-sis for the development of decreased sensory nerve con-duction velocity noticed in many peripheral neuropathies. Features of large neuron (Fig. 2) wherein the configura-tion of Nissl substance stands out so distinctly different that it is difficult to unequivocally equate it with any sin-gle subtype of DRG neuron. In fact its soma size matched with type A1, while location of Nissl substance with type A3 and size of Nissl granules with type B1 [1]. How this morphological feature is really going to affect its func-tional properties in health and disease, similar to those mentioned above remains to be resolved.

The morphological feature of neuron (Fig. 3) wherein shape of soma is pyramidal is rather very uncommon. It is contrary to usual description and in fact to our knowledge this is first report of its kind. In fact sectioning of pseu-dounipolar neuron in any known plane is unlikely to give rise to pyramidal somatic shape. The presence of fine dynamic projections on the surface of neuron in relation to its contact with satellite cells [16] resulting into such gross alteration in the shape of its soma is also not plausi-ble. Moreover, it does not appear to be an artifact either. How this rather unusual somatic shape which otherwise appears normal will affect its functional properties is not clear; may be that it will affects the distribution pattern of ion channel present on its surface which is believed to lend neurons their unique functional attributes [17].

Sensory and autonomic ganglion neurons are known to be characterized by the presence of centrally placed and eccentrically placed nuclei respectively. In the present study, occasional neurons from an otherwise normal DRG revealed presence of eccentric nuclei (Fig. 4). The neu-ronal perikaryal response to axonal injury includes reduc-tion in axonal caliber, development of chromatolysis and nuclear eccentricity [18]. However, in our study, the nu-clear eccentricity noticed is neither due to apparent axonal injury nor it is associated with obvious chromatolysis. Therefore, it remains to be resolved as to whether these neurons represent a minor subpopulation of normal DRG neurons or else those neurons which are undergoing rou-tine apoptosis as a part of ageing process. Occurrence of nuclear eccentricity in normal DRG assumes significance because caution must be exercised while looking for ex-perimental degenerative changes in DRG and observing nuclear eccentricity as one of the criteria [13,18]..

Primary afferent neurons in mammalian DRG are ana-tomically isolated from one another and are not synapti-cally interconnected. And as such they are classically thought to function as independent sensory communica-tion elements. In the present study a couple of neurons appear to share a common sheath formed by SGCs (Fig. 5). Although, presence of ultrathin interneuronal sheath element cannot be ruled out with certainty by light mi-croscopy, the significance of such intimate association among certain neurons is not very clear. It has recently been shown that most DRG neurons are transiently depo-larized when axons of neighboring neurons of the same ganglion are stimulated repeatedly [19]. Cross-depolariza-tion contributes to mutual cross-excitation. This intragan-glionic dialog appears to be mediated, at least in part, by an activity-dependent diffusible substance (s) released from neuronal somata and/or adjacent axons, and directed to neighbouring cell somata and/or axon [19]. Thus it ap-pears that such type of intimate association (Fig. 5) may provide a suitable morphological substrate for the afore-said intraganglionic communication which is based on novel, non-conventional neural mechanism and which has practical consequences for sensory conduction in health and disease [19,20].

Although much less is known about SGCs in sensory ganglia, it appears that these cells share many characteris-tics with their central counterparts. It has been shown that SGCs also promote formation of dynamic projections from the surface of neuronal perikarya as compared to the extracellular matrix [16]. Like Schwann cells SGCs cyto-plasm contains peroxisomes which may influence oxygen levels in the vicinity of’ perikarya, and they may also con-tribute to the processing and breakdown of material which gains access to the extra cellular spaces near neurons [21]. In the present study the SGCs number seems to positively correlate with the size of neuronal cell somata and this is in agreement with the finding in other species showing the volume of SGC-sheath to be directly proportional to both the volume and surface area of the related neuronal cell body [22].

It is concluded that a small subpopulation of cervical DRG neurons on their morphological grounds, may be considered as atypical. These neurons possibly do not represent species or regional variation, and therefore, need suitable categorization with respect to their ultra-str-uctural, physiological and neurochemical characteristics.

We acknowledge the co-operation of technical staff of Neuroanatomy and P.G. laboratories, Department of Anatomy, JNMC, Aligarh Muslim University, Aligarh.