The jugular foramen varies in shape and size from side to side in the same cranium, and in different crania, racial groups and sexes. The foramen's irregular shape, its formation by two bones and the numerous nerves and venous channels that pass through it further com-pound its anatomy. The shape and size of the foramen is related to the size of sigmoid sinus and the presence or absence of prominent jugular fossa. The present study was undertaken in 125(250 sides) adult south Indian skulls from Department of Anatomy JJM Medical Col-lege Davangere Karnataka India. Out of 125 skulls in 64.8% of cases the right foramina were larger than the left, in 24.8% of cases the left foramina were larger than the right and in 10.4% cases were equal on both sides. The jugular fossa present bilaterally in 49.6%, on the right only in 27.2% cases, on the left only in 8.8% cases and was absent in 14.4% cases.

The jugular foramen is difficult to understand and to ac-cess surgically; the difficulties in exposing this foramen are created by its deep location and the surrounding struc-tures, such as the carotid artery anteriorly, the facial nerve laterally, the hypoglossal nerve medially and the vertebral artery inferiorly, all of which block access to the foramen and require careful management. It is difficult to concep-tualize because it varies in size and shape in different cra-nia, between the two sides the same cranium, from its intracranial to extracranial end in the same foramen and because of its complex irregular shape, its curved course, its formation by two bones and the numerous nerves and venous channels that pass through it [1]. The jugular fo-ramen can be regarded as a hiatus between the temporal bone and the occipital bone. The right foramen is usually larger than the left. The jugular foramen is commonly divided into three compartments-two venous and a neural or intrajugular compartment. The structures that traverse the jugular foramen are the sigmoid sinus and jugular fossa, the inferior petrosal sinus, meningeal branches of the ascending pharyngeal and occipital arteries, the glos-sopharyngeal, vagus and accessory nerves with their gan-glia [2]. The present work was carried out to study normal range of variations in relation to size, shape and com-partments of jugular foramina.

One hundred and twenty five normal adult skulls were procured from of the Department Anatomy, JJM Medical College, Davangere, Karnataka, India. The length, width and area of the jugular foramina were measured. Sagittal and transverse diameters were taken using vernier calli-pers. Each dimension was measured thrice and the mean figure recorded. Differences in the sides were analysed. The presence of jugular fossa and septation were also ob-served. 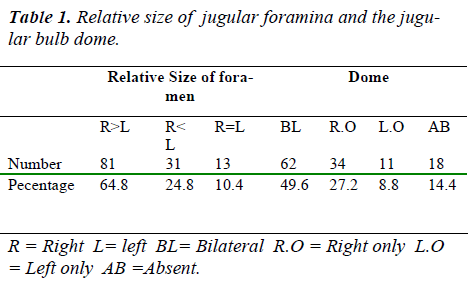 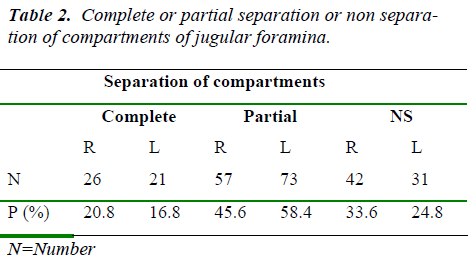 Table 2: Complete or partial separation or non separa-tion of compartments of jugular foramina.

The size and shape of the jugular foramen is obviously related to the size of the internal jugular vein and the presence or absence of a prominent superior bulb the right foramen is usually larger than the left.

Standard text books the superior sagittal sinus as draining into the right transverse sinus but there is a very wide variation in the anatomy of the intra cranial venous si-nuses which accounts for variation in size and shape of jugular foramina.

The difference in size of the two internal jugular veins is already visible in the human embryo at the 23mm stage and probably results from differences in the pattern of development of the right and left brachiocephalic veins.

Hatiboglu and Anil [4] studied 300 Anatolian skulls from the 17th and 18th centuries and observed that in 61.6% the foramen was larger on the right side and in 26% it was larger on the left side and in the reminder of equal size. Presence of jugular fossa was observed bilaterally in 49%, on the right only in 36%, on the left only in 4.7% and ab-sent bilaterally in 10.3% of skulls.

The present study observed the variations of jugular fo-ramina different from the observations by Sturrock R.R and Hatiboglu & Anil because of the different geographi-cal areas.

The present study had similar results with those of Patel & Singel because the skulls taken for study in both cases were from the same subcontinent but different regions.

The compartmentalization of the jugular foramen is an oversimplification and has no surgical significance. In-stead, it is more useful to describe the petrosal, sigmoid, and intrajugular portions of the jugular foramen. The petrosal portion contains the inferior petrosal sinus. The sig-moid portion receives the sigmoid sinus. The intrajugular portion contains cranial nerves IX, X, and XI.