Bovine amphistomosis is a highly neglected snail borne trematode disease causing great economic loss to dairy farmers. The aim of the present study was morphological identification of different amphistome species and molecular characterization of the most common amphistomes prevalent in the study area. Among the ten different species of amphistomes identified in the present study four common species namely, F. c o b b o l d i, F. e l o n g a t u s, G. c r u m e n if e r and Paramphistomum spp. were genetically characterized by amplifying second internal transcribed spacer sequence flanking 5.8S and 28S partial ribosomal gene sequences (ITS-2+) which produced amplicons of 494 bp, 503 bp, 514 bp and 494 bp respectively. The nucleotide sequences of four species of amphistomes F. cobboldi, F. elongatus, G. crumenifer and Paramphistomum spp . obtained in the present study is the first report from Kerala (India) which provides the primary sequence data of the rDNA ITS-2+ region of the amphistome flukes. Nucleotide sequence analysis of the four species revealed eight nucleotide differences between the sequences of pouched amphistomes ( F. cobboldi, F. elongatus and G. crumenifer ) and unpouched ( Paramphistome spp.). Nucleotide sequence analysis and in silico restriction map analysis of four amphistomes suggest the possibility of ITS-2+ region as a useful genetic marker for species identification.

Amphistomosis is a common ruminant trematode disease causing high morbidity and mortality in cattle, goats, sheep and water buffaloes. The disease is characterized by gastroenteritis, reduced milk production and lowered feed conversion resulting in economic loss. The disease has widespread geographical distribution in tropical and subtropical areas and has recently emerged as an important cause of productivity loss [1]. Paramphistomosis is caused by trematodes belonging to different genera and species of the family Paramphistomidae.

Even though these species are difficult to identify due to their morphological similarities they may differ in certain aspects like susceptible hosts, pathogenicity and geographical distribution. More than forty species of amphistomes have been recorded, among which four species viz., Gastrothylax crumenifer, Fischoederius cobboldi, F. elongatus and Paramphistomumi are regarded as common amphistomes of domestic ruminants [2]. Paramphistomes are ubiquitous and abundant within hosts but the importance of these worms has been underestimated widely.

Since amphistome species are morphologically similar alternative approaches using molecular biology techniques are useful for species identification [3,4]. The second internal transcribed spacer (ITS2) region of ribosomal DNA (rDNA) is particularly shown to be a useful genetic marker in species identification and for phylogenetic analyses [3,5-7].

Little attention has been received in the use of molecular tools to identify the species prevalent in South India.

Molecular characterization of the prevalent species of our area will help to explore the regional variation and to contribute a molecular phylogenetic framework for paramphistomes in Kerala.

Adult amphistomes were collected from rumen of naturally infected cattle slaughtered at Municipal Corporation Slaughter house, Thrissur, Kerala. The parasites were washed thoroughly in phosphate buffered saline (PBS), pH 7.4 and identified by morphology as per Nath [9]. Individual flukes after washing were pressed gently in between two microscopic slides for gross identification of the species. The representative samples of different species of amphistomes were grouped into two for morphological and molecular studies.

DNA extraction was performed using the DNeasy blood and Tissue Kit (QIAGEN, Hilden, Germany) according to manufacturer’s recommendations with necessary modifications. Single adult fluke from each species was used for the extraction of genomic DNA. The DNA concentration at 260 nm and purity at 260:280 nm was determined using nanospectrophotometer (Nano drop 200C, Thermoscientific, USA).

PCR was performed in a thermocycler (MJ Mini, BioRad) under the following cycling conditions for different DNA templates (DNA from G. crumenifer, F. cobboldi, F. elongatus, Paramphistomumi spp.): 94C for 5 min; 35 cycles of 94C for 1 min, 75C for 30 sec and 72C for 1 min; followed by 72C for 7 min.

In silico analysis of the ITS-2+ sequences was performed to identify the restriction enzyme (RE) cutting sites using NEB cutter online tool (BioLabs).

Adult amphistomes collected from rumen of cattle were subjected to morphological identification as described by Nath [9] (Plate 1).

Among the different pouched amphistomes identified F. cobboldi was the most prevalent species followed by G. crumenifer as revealed from slaughter house studies. Mixed infection was common with pouched amphistomes outnumbering unpouched ones. Every infected rumen carried thousands of flukes with suckers adhered to the ruminal papillae and mucosa.

The standardised protocol of PCR with an annealing temperature of 75°C amplified an approximately 500 bp product for all the four species namely F. cobboldi, F. elongatus, G. crumenifer and Paramphistomumi spp. using ITS-2+ primers.

The amplicons of four amphistomes namely F. cobboldi, F. elongatus, G. crumenifer and Paramphistomumi spp. obtained after PCR with ITS-2+ primers were of 494 bp, 503 bp, 514 bp and 494 bp, respectively (Figure 1). 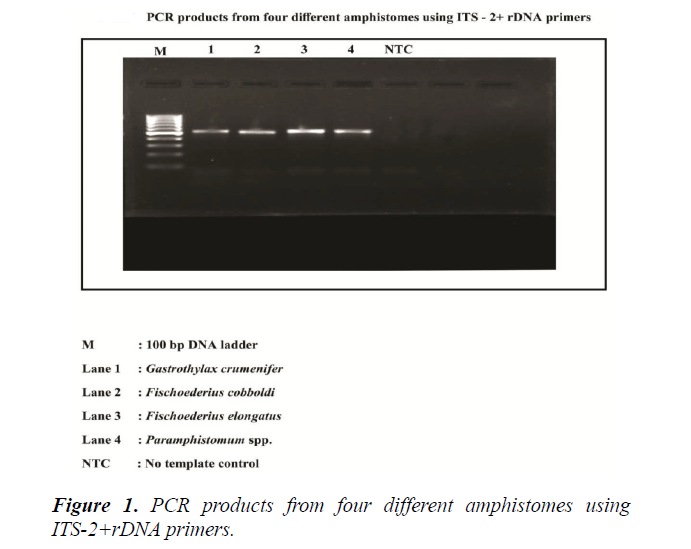 The sequences were aligned using online software CAP3 and blasted using NCBI BLASTn tool to analyse their identity with other published sequences available in online databases. The sequence length of four different species of amphistomes obtained with ITS-2+ rDNA primers along with their accession numbers obtained are summarised in Table 1.

The ITS-2+ sequences of the two Fischoederius spp. obtained in the present study were 100 per cent identical whereas it revealed nucleotide differences at two bases with the corresponding sequence of G. crumenifer (Figure 2). 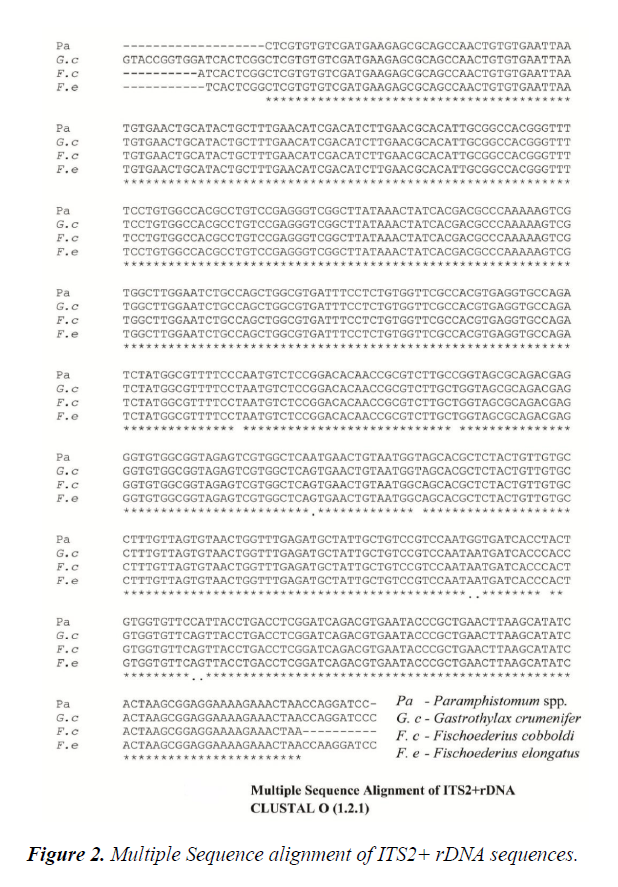 The sites for these enzymes were lacking in F. cobboldi, F. elongatus and Paramphistomumi spp. The sequence of Paramphistomumi spp. differed from the pouched species in the absence of recognition site for the enzyme BspCNI which could produce 335 bp and 179 bp products in the latter. 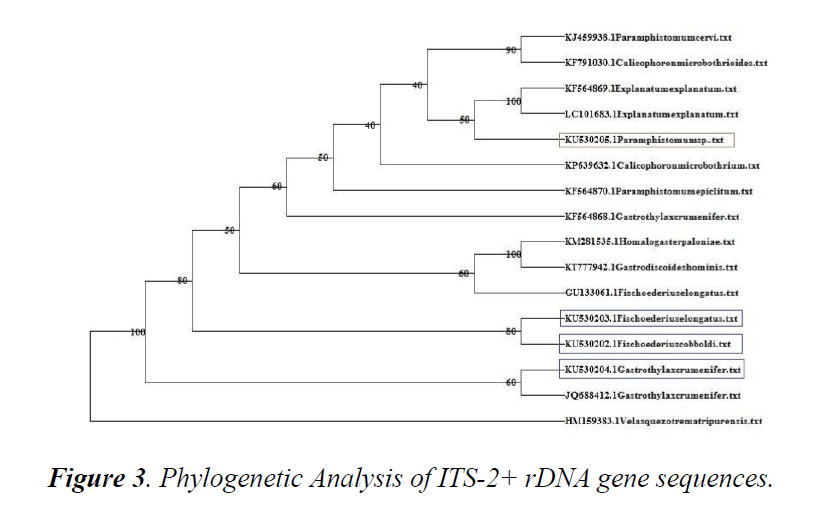 is even more difficult. Thus alternative approach to delineate species is needed. In the present study, ten different species of amphistomes were identified based on morphological parameters from abattoir samples viz., F. cobboldi, G. crumenifer, F. elongatus, Carmyerius spatiosus, P. epiclitum, P. cervi, Ceylonocotyle scoliocoelium, scoliocoelium cotylophorum, C. indicum and explanatum explanatum. Earlier work on the prevalent species of amphistomes by Nath [9] recorded seventeen species of amphistomes from Kerala amongst which G. crumenifer was predominant. However, in the present study F. cobboldi was found to be the most predominant species. The present study used DNA based tools for authentic identification of the common flukes recovered. PCR-based diagnosis using rDNA ITS-2 sequences have been proved as a reliable tool to identify digenean species and to recover their phylogenetic relationships [5]. The second internal transcribed spacer (ITS-2) sequence flanking 5.8S and 28S partial ribosomal gene sequences of the four species of amphistomes viz., F. cobboldi, F. elongatus, G. crumenifer and Paramphistomumi spp. were amplified using ITS-2 primers with sequenced product sizes of 494 bp, 503 bp, 514 bp and 494 bp for F. cobboldi, F. elongatus, G. crumenifer and Paramphistomumi spp. respectively. The second internal transcribed spacer region of rDNA is particularly valuable and can be utilized for phylogenetic analyses at the genus and species levels [3,14-17]. Similar sequencing studies were carried out by Hussain et al. [8] who reported amplification of an approximately 500 bp of the ITS-2+ region for P. epiclitum, G. crumenifer and G. explanatum. The present study is also in agreement with Ghatani et al. (2012) who recorded 477 bp, 520 bp, 463 bp and 482 bp products by amplifying ITS2+ region of F. cobboldi, F. elongatus, G. crumenifer, C. spatiosus and V. tripurensis. Shylla et al. [16] genetically characterised three species of trematodes, H. paloniae, C. calicophorum and O. streptocoelium using ITS-2 primers and obtained annotated products of 239 bp, 288 bp and 288 bp. ITS-2 sequence analysis revealed eight nucleotide differences between the sequences of pouched (F. cobboldi, F. elongatus, G. crumenifer) and unpouched (Paramphistomumi spp.) species. Besides it revealed 100 per cent identity between the two Fischoederius species but was clearly different from G. crumenifer at two nucleotide positions. Ichikawa et al. [16] reported that Gigantocotyle explanatum differed from P. leydeni at 7 nucleotide sites and hence could be used as a molecular marker for epidemiological studies on G. explanatum. Differences of even one nucleotide change in the ITS-2 sequence can be used as an effective genetic marker to distinguish closely related digenean species [8]. Hence in the present study the two nucleotide difference between G. crumenifer and Fischoederius species suggests the possibility of ITS-2+ region to be used as a species identification marker. However, further studies are required with more number of sequence data for confirmation. Moreover, the results of the study will contribute to the sequence data base of South Indian isolates of amphistome species. The present study reports sequence divergence upto 5.4 among the four amphistome species suggesting the usefulness of the ITS-2+ region for discriminating closely related species. Restriction mapping of the sequences obtained in the present study when analysed in silico revealed that the four amphistomes shared the restriction sites for a number of endonucleases. Gastrothylax crumenifer was found to have unique recognition site for BtsI MutI and TspRI which were absent in F. cobboldi, F. elongatus and Paramphistomumi spp. Also the present study identified the recognition site for the enzyme BspCNI only in pouched amphistomes which differed from unpouched Paramphistome spp. Thus restriction enzyme mapping in the present study suggests the possibility to differentiate G. crumenifer from the other species with the presence of recognition site for BtsI MutI and TspRI. Itagaki et al. [3] identified three amphistome species by PCR-RFLP based on the differences in the restriction sites of AccII on the ITS2 sequence. Phylogenetic tree topology obtained based on the sequence data suggested that the four amphistome species belong to two families viz., Gastrothylacidae and Paramphistomidae. The Kerala isolates obtained in the present study seemed to cluster with Meghalaya and Shillong counterparts. Ghatani et al. [7] had shown the applicability of ITS-2 sequence and secondary structure in deriving phylogenetic relationships at interfamily level. Hussain et al. [8] reported sequence homology in isolates of P. epiclitum (99.3-99.7%), G. crumenifer (97.2-99.3%) and G. explanatum (95.1-97.2%) on phylogenetic analysis. The present study reports the first molecular characterisation of amphistome flukes from the state of Kerala, India. This study confirms ITS2 as a useful molecular marker for species identification and the sequence data obtained serves as a corner stone for further epidemiological studies on amphistomes in the region.

The authors are thankful to the Kerala Veterinary and Animal Sciences University for the financial grant and facilities provided for the research work. 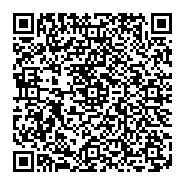