Morphological and Histopathological Studies of Trichuris Ovis in Goat Intestine

Morphological and histopathological study of large intestine of goats infected with Trichuris ovis revealed the embedded attenuated anterior end in mucosa, surrounded with fibroblast and leucocytes in histopathological sections. There was no sign of fibrosis and necrosis. Crypts of Leiberkuhn, muscularis mucosa, submucosa and muscularis externa were clearly differentiated with slight infiltration of inflammatory cells like mononuclear cells, leucocytes, goblet cells along with epithelial changes and overall mucosal architecture in vicinity of worm penetration.

India’s livestock sector is one of the largest in the world and accounting for 26.40% goats and plays an important role in economy (Anon, 2012). Trichuriasis is a neglected tropical disease causing significant animal and human health problems as well as considerable socio-economic consequences worldwide. Trichuris is a widespread gastrointestinal parasite that can be found in a broad range of hosts. Its life cycle is direct where orally ingested embryonated eggs hatch in the small intestine and the released larvae burrow into the intestinal wall of the caecum and proximal colon where they develop to mature worms (Jenkins, 1970., Beer, 1973). The anterior end of the worm forms syncytial tunnels of epithelial cells around itself as it burrows through the mucosa (Panesar, 1980., Croll, 1980., Cliffe, 2004., Grencis, 2004). The posterior end protrudes into the lumen facilitating copulation and egg release. Trichuris ovis is a whipworm infecting the caecum and colon of sheep, goats, cattle and other ruminants in all parts of the world but is relatively harmless. However, clinical diseases due to T. ovis have been reported in sheep and cattle (Kuchai et al. 2013). Heavy infection may be observed in very young lambs. Animals may suffer from bloody colitis and diphtheritic caecitis which may cause ulcerative and necrotic lesions on the mucosa. In animals with high worm burden severe anaemia and dehydration and jaundice may lead to the death of the animals (Soulsby, 1982., Bowman, 2002., Taylor et al. 2007). After a century of research on the biology and control, this parasite continues to be an important constraint on ruminant production. Novel developments for the management of nematode parasites such as vaccines, biological anthelmintics, genetic markers, and selective breeding may, in the future, provide additional or alternative means of parasite control. However, such alternative control methods are likely to be more dependent on sound understanding of the species, life cycle and their pathogenicity (Kuchai et al. 2013). Keeping these facts in view the present study was aimed at morphological and histopathological observation in goats infected with T. ovis.

The large intestine of goat was obtained from the local abattoir and Trichuris ovis were collected from caecum of slaughtered goat which was incised in the laboratory. Both males and females recovered from the caecal mucosa were collected, washed and stretched in normal hot saline. These worms were preserved in 70% alcohol, dehydrated in glycerine-alcohol (10 parts glycerine and 90 parts 70% alcohol) and then placed in desiccator at room temperature for 3-4 weeks for clearing. Dehydrated nematodes were then mounted on glass slides in anhydrous glycerine. The slides were observed under the compound microscope and photographs were taken under Nikon Research Microscope (Eclipse 600) at X40, X100 and X400.

For histopathological studies, affected tissue pieces of intestinal caecum containing the embedded parasites were taken out and washed thoroughly in Hank’s Balanced Salt Solution to remove the debris. Washed specimens were fixed in Bouin’s fixative for 42 h. Fixed pieces of tissues were again washed thoroughly and dehydrated through ascending alcoholic grades, cleared in xylene and embedded in paraffin wax. The block was then trimmed and affixed to a holder which is inserted in the microtome to perform microtomy. The blocks were cut at 5 μ and were then affixed to slides and stretched on stretching box. Sections were dewaxed by putting slides in xylene and then sections were hydrated by passing through descending grades of alcohol. These slides were stained with haematoxylin and eosin and washed with water followed by treatment with 1% acid alcohol. The histopathological changes associated within tissues were examined under the compound microscope (Nikon E-600) and photographs were taken by the attached Nikon digital camera (DN 100).

The adult males were 31.25-68.50 mm long and 0.28-0.60 mm in width; with a slender filiform anterior end comprising about three-fourths of the entire body length. Spicule was 4.8-6.0 mm long along with spicular sheath measuring 1.45 mm, covered with spines. The adult females were 51.00-70.50 mm long and 0.32- 0.65 mm in width. Eggs were lemon shaped with plug on both the poles. Buccal cavity was provided with spear like structure, but devoid of lips. The cuticle was transversally striated with wide longitudinal bacillary band. Oesophagus consists of a thin-walled tube surrounded by large unicellular glands, the stichocytes (Figures 1 and 2). In males, the posterior end which was spirally coiled with a single spicule, having slightly expanded proximal and a pointed distal end. Spicular sheath had a slightly stretched globular expansion at its distal end and was covered with closely set spines (Figure 3). In case of female, posterior extremity was slightly curved (Figure 4), but the vulvar opening was situated near the oesophageo-intestinal junction (Figure 5) with genital tract bearing fully developed eggs in a single profile (Figure 6). 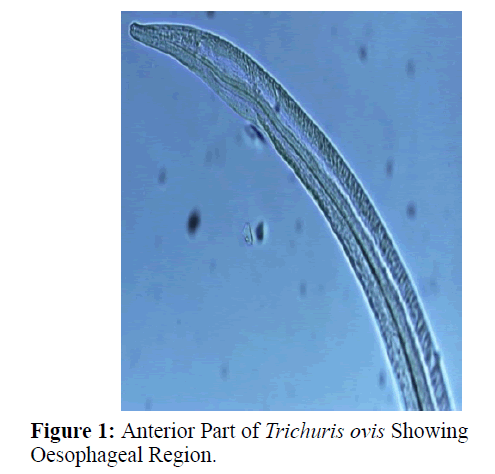 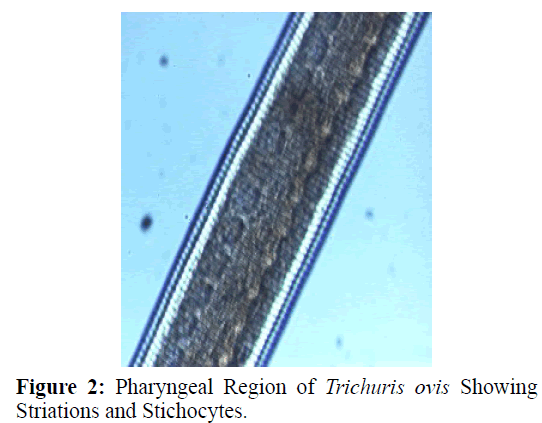 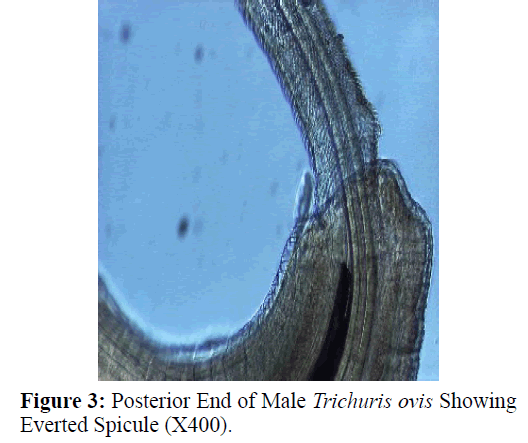 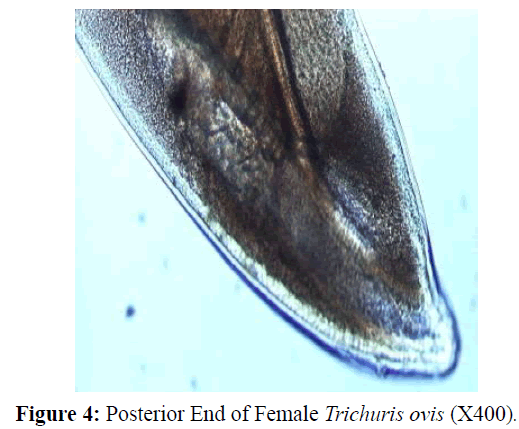 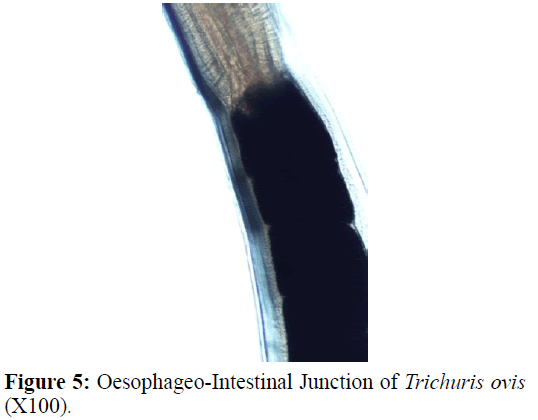 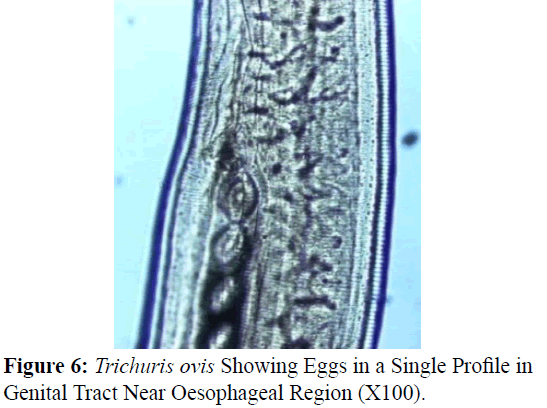 Haematoxylin and eosin stained sections showed intestinal glands (Crypts of Leiberkuhn) and lamina propria (Figures 7 and 8). In the vicinity of worm penetration moderate leucocyte infiltration was also visible. Sections revealed the embedded attenuated anterior end of Trichuris ovis surrounded with fibroblast and leucocytes (Figures 9 and 10). It revealed a cellular infiltration around the embedded worm (Figures 10-12). Worms were neither encapsulated nor calcified as parasite penetrates its anterior end under the mucosa to receive nutrition and withdraw it. But sometimes when it remains embedded for longer duration, cell infiltration increases. Macrophage, neutrophils and lymphocytes were the predominant cell types surrounding the worm. A few adherent leucocytes were also visible on and around the cuticle of T. ovis (Figures 10-12). 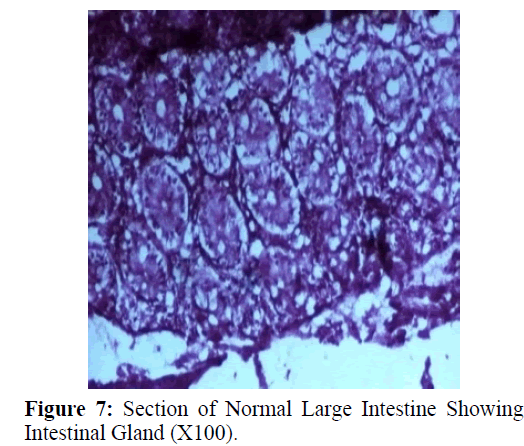 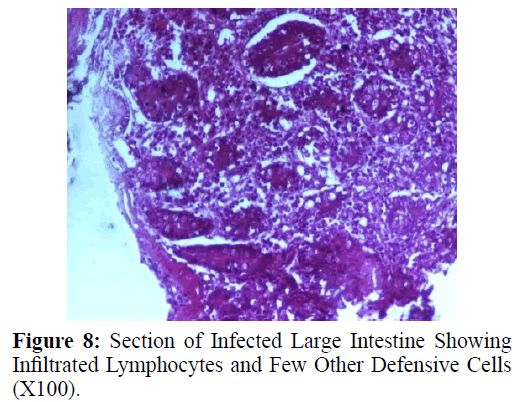 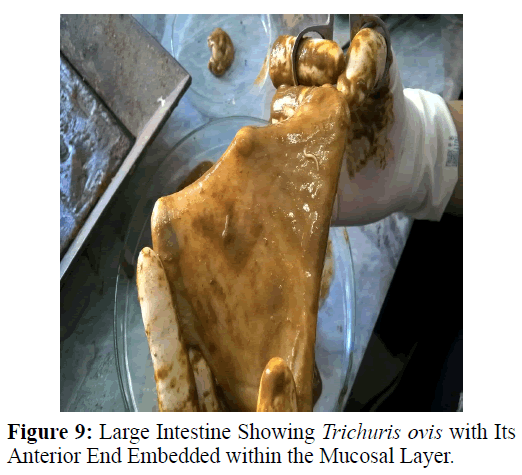 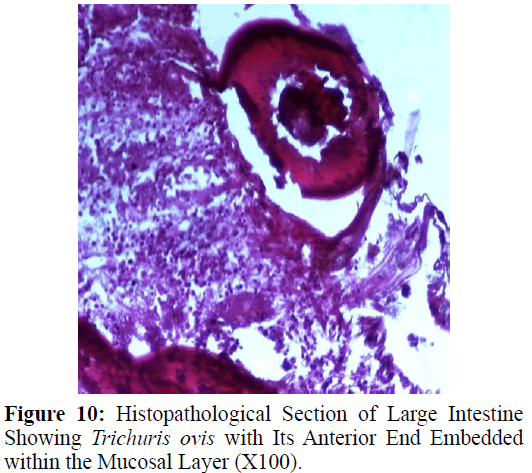 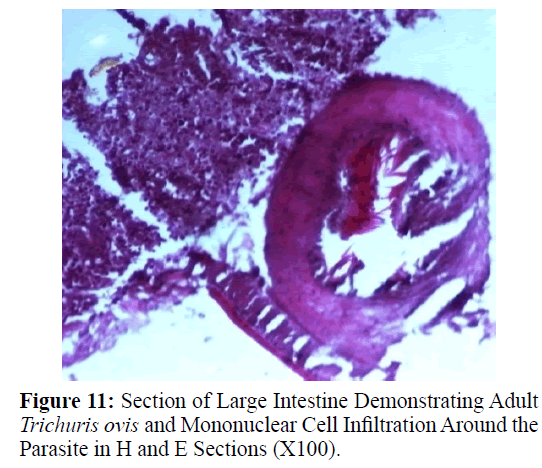 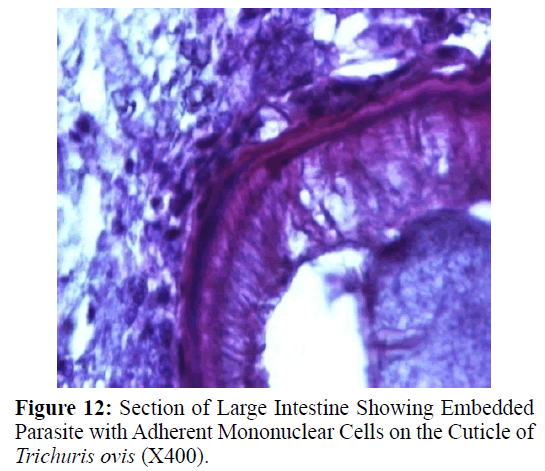 The pathology is a consequence of the host immune response, which is assumed to be generated to eliminate invading pathogens. Lesions may also be caused by the direct damage from worm attachment or the indirect damage from soluble products released by the worms (Abner et al. 2002). Bacterial invasion takes place at the site of tissue damage which may elicit immune response against the bacteria and aggravate the lesion by enhanced cellular infiltrations (Mansfield, 1996., Urban, 1996). The foremost expression of the host against the parasite invasion reflected by the changes in the formed elements of blood. The leucocyte response vary from host to host against a particular infection, which may also vary with age and frequency of exposure, being more severe in non-specific host while it is feeble in the specific host as an adjustment is made between the host and parasite. Sometimes, it is specific and characteristic and may be taken in conjunction with other findings in diagnosis of a particular species.

In the present study, examination of histological sections revealed anterior region of T. ovis inserted in the lining of the large intestine (caecum) of the host. The nematode was found exclusively under the mucosal layer covered by the apical surface of mucosal epithelium, forming a tunnel. The crypts of Leiberkuhn, submucosa, muscularis mucosae and muscularis externa were clearly differentiated with slight infiltration of mononuclear cells as earlier observed by (Afrin et al. 2016). Infection of Trichuris in large intestine caused thickening of mucosa which was observed during autopsy. Grossly, large intestine showed congestion, haemorrhagic spots, ulcer formation and nodule formation with thickening of the caecal valve. Similar observations were made by earlier workers in different host infected with their respective species of genus Trichuris. It was earlier observed that in trichuriasis, lymphoid nodules on the lamina propria was enlarged from which the parasite may produce some chemical mediators that cause lymphoid proliferation locally (Mohanta et al. 2007). Acute or chronic inflammation at the mucosa of the caecum and sometimes colon was observed in dogs infected with Trichuris vulpis (Soulsby, 1982., Bowman, 2002., Taylor et al. 2007). Trichuris lacerate the tissues with an oral stylet projected through the oral opening within the tunnel under mucosal layer. Anterior end of these whipworms move underneath the epithelium looking for blood and fluids by inserting the stylet into the blood vessels to create blood pools which are ingested.

Histological sections revealed leucocyte infiltration around the worm embedded under the mucosa but there was no sign of rigid encapsulation, fibrosis, and necrosis. This is probably due to the reason that the penetration of anterior end to receive its nutrition is a normal phenomenon and parasite move to new location after a brief period. But since the penetration of parasite inflame the tissues, leucocytes invasion takes place in the vicinity of the parasite in the inflamed areas which was observed in haematoxylin– eosin stained slides in the present study. Most of the infections caused by T. ovis are generally light and asymptomatic as earlier observed by (Soulsby, 1965). In some cases a large number of worms cause a diphtheritic inflammation of the caecal mucosa. T. ovis penetrates the intestinal wall with their anterior parts. Probably during the process of penetration they cause mild to moderate degree of damage in the intestinal surface, resulting in petechial haemorrhages. As the parasitic infection is a long standing encroachment on the intestinal wall, especially in untreated animals, it causes destruction of the lining epithelium where they predominantly inhabit (Soulsby, 1965). Due to this continuous irritation of the adult parasites on the intestinal wall, catarrhal inflammation occurs. That is why goblet cells were increased in numbers and size.

Earlier findings indicate similar but slightly higher accumulation of leucocytes in rats which were experimentally and naturally infected with Litomosoides carinii and Setaria cervi, respectively (Bertram, 1966., Mohan, 1973., Weiner, 1976., Soulsby, 1976., Khatoon et al. 1979). It has been observed that the animals moderately infected with Trichuris ovis cause slight catarrhal inflammation along with the anchored parasites. Petechial haemorrhages on the mucosa along with infiltrated lymphocytes, eosinophils and macrophages were observed in the caecum and colon. Proliferation of goblet cells was also noticed in the intestine of infected animals during the present study as earlier observed by (Kumar et al. 2015). Destruction and desquamation of epithelial lining of the intestine were also detected. This finding is conformed to the findings obtained in T. ovis where tissue invasion and occasional peripheral eosinophilia was observed (Kumar, 1987., Lal, 1987., Saha, 1998., Bhowmik, 1998., Patnode et al. 2014).

During the present study histological sections revealed leucocyte adherence to worm which were embedded under the mucosa. This is in response to the host defence to restrict the activity of the worm. Macrophages, lymphocytes and neutrophils were the predominant cell types around the embedded worm. Similar cell adhesions have been reported in the plural and peritoneal cavity of white rats and guinea pigs infected with Litomosoides carinii (Mohan, 1973) and Setaria cervi (Khatoon et al. 1979).