The T-3279G mutation in Phenobarbital Responsive Enhancer Modulein (PBREM), TA-insertion in the TATA box, creating the A(TA)7TAA motif instead of the A(TA)6TAA, and G211A mutation in coding exon 1, particularly in Asians, of human UGT1A1 (UDP-glucoronosyltransferase) gene are the three common polymorphisms of Gilbert’s syndrome. This article employed dot blot hybridization to detect the T-3279G, A(TA)6/7TAA and G211A mutation of UGT1A1 gene in 15 patients. In the dot blot hybridization assay, PCR products were denatured and spotted on positively charged nylon membranes instead of acrylamide-modified slides. Then three pairs of probes were labeled by digoxigenin and hybridized with the spotted array. After hybridization, the signal was visualized using TMB color development solution and all possible polymorphisms of the T-3279G, A(TA)6/7TAA and G211A in 15 Chinese patients with hyperbilirubinemia were successfully identified. The results of 15 samples by dotblot hybridization were consistent with the sequencing results. The data showed that dot blot hybridization assay is a quick and low cost method to detect UGT1A1 gene polymorphisms and helpful to diagnosis of Gilbert’s syndrome.

UDP-glucuronosyltransferases (UGTs), one important family of phase II drug metabolizing enzymes, catalyze the biotransformation of many endobiotics and xenobiotics, and are coded by polymorphic genes [1]. UGT enzymes are mainly expressed in the liver and the intestine and classified into different families, subfamilies and genes. UGT1A1, a member of UGT1 subfamily, is a critical enzyme in the elimination pathway of bilirubin. It is well known that inhibition of UGT1A1-mediated bilirubin clearance may lead to the elevated level of unconjugated bilirubin in serum, which may lead to hyperbilirubinemia, jaundice, hepatotoxicity and neurotoxicity. Gilbert’s syndrome is a mild hereditary unconjugated hyperbilirubinemia due to defect of 1UGT1A1. Individuals with Gilbert's syndrome exhibit lower glucuronidation rates when medicated with several HIV drugs and irinotecan [2-6].

Numerous polymorphisms of UGT1A1 have been identified [7,8]. Firstly, a Phenobarbital Responsive Enhancer Module (PBREM) is located approximately 3.5 kbp upstream from the coding region of UGT1A1 gene and the T-3279G mutation in PBREM is a common polymorphism causing Gilbert syndrome [9]. Secondly, the UGT1A1*28 polymorphism is characterized by the TA-insertion in the TATA box, creating the A(TA)7TAA motif instead of the A(TA)6TAA. This thymine- and adenine-rich regulatory region is the major recognition point for the binding of transcription factors and RNA polymerase in many genes. Clinical studies have demonstrated a significant correlation between the UGT1A1*28 polymorphism and the pharmacokinetics of drugs [10-12]. Finally, a significant association was observed between prolonged jaundice in male infants and UGT1A1 G71R polymorphism (G211A mutation in coding exon 1 of UGT1A1 gene) [13]. The coding region polymorphism is found only in Asians and is associated with decreased enzyme function, whereas the promoter polymorphism is associated with decreased gene expression. Individuals carriers of the UGT1A1*6 (G211A mutation) and *28 variants are apparently much more likely to develop jaundice after medication with methotrexate, indinavir, sorafenib, atazanavir or other drugs inhibiting UGT1A1. This is presumably due to the lower functional reserve available to compensate UGT1A1 inhibition [6].

15 Chinese patients with hyperbilirubinemia were recruited at the Second Affiliated Hospital of Southeast University, Nanjing, P. R. China. All patients had total bilirubin levels (TBIL) of ≥ 220.6 umol/L, and no signs or symptoms indicative of other hepatobiliary diseases. Serum samples were used for the evaluation of total bilirubin level, and all biochemical tests were carried out in the same laboratory with standardized laboratory methods. Peripheral blood samples were collected from all participants in the morning after overnight fasting. Total DNA was extracted using the QIAamp DNA midi blood kit (QIAGEN, Germany) according to the standard protocol. All participants provided a written informed consent before enrolment and all research procedures were approved by the Ethics Committee of the Second Affiliated Hospital of Southeast University.

PCR products were denatured by mixing with the same volume of denaturation solution (0.5 N NaOH, 1.5 M NaCl) at room temperature for 30 min. The denatured DNAs were then spotted on 25 mm positively charged nylon membranes (Roche Diagnostics, Mannheim, Germany), followed by baking at 100°C for 30 min.

Hybridization with the corresponding probes

The spotted array was pre-hybridized with 1 × DIG Easy Hyb (Roche Diagnostics) in a hybridization oven (Robbins Scientific Corp., USA) for 4 h at 60°C. Samples of 10 ml (50 ng) of DIG-labeled candidate probe (Table 1) was denatured for 10 min at 98°C and mixed with 1 × DIG Easy Hyb (1.5 ml) warmed to 60°C. The mixture was incubated with nylon membranes bearing DNA arrays overnight at 37°C in the hybridization overnight.

Table 1. The probe sequences used in this study.

After hybridization, the nylon membranes were washed twice with 50 ml of 23 SSC/0.1% SDS at room temperature, each for 10 min, and twice with 50 ml of 0.53 SSC/0.1% SDS at 62°C, each for 10 min, respectively. Then the nylon membranes were blocked with 10% BSA for 1 h. The membranes were incubated with a 1:1000 dilution of Horseradish Peroxidaseconjugated IgG Fraction Monoclonal Mouse Anti-Digoxin Antibody (Jackson, USA) for 30 min and then washed three times with TBST buffer (20 mM Tris HCl pH 8.0, 150 mM NaCl, and 0.05% (v/v) Tween 20). Finally, the signal was visualized using TMB color development solution (Phygene, China).

The general clinical data are shown in Table 2. 15 patients included 10 males and 5 females with a median age of 55 y (range, 38-68). All patients had TBIL of ≥ 220.6 umol/L. In principle, two rounds of dot-blot hybridization were carried out simultaneously.

The homozygous wild type hybridized with only digoxigeninlabeled wild-type probes, showing wild-type signals. While the homozygous mutant hybridized with only digoxigenin-labeled mutant-type probes, showing mutant signals. Both the wildtype signals and the mutant signals were shown for the heterozygote. So, mutant alleles were distinguished from wildtype alleles. A schematic outline of genotyping approach using dot-blot hybridization is shown in Figure 1. 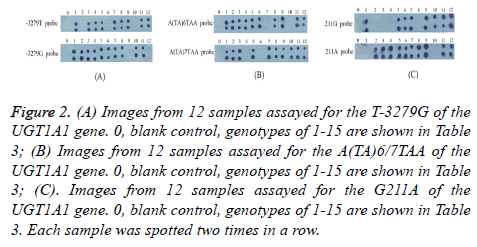 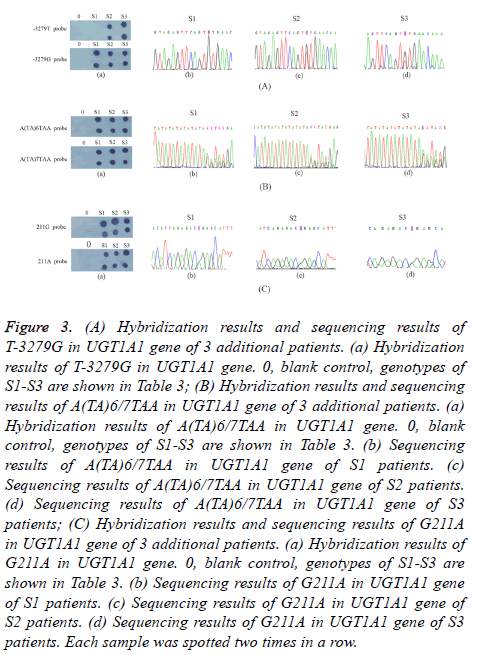 UGT1A1 is the only physiologically relevant UGT isoform involved in the metabolic clearance of endobiotics bilirubin. Potent inhibition of UGT1A1 may result in partial or complete loss of UGT1A1 activity, and then increase the exposure of bilirubin and other endogenous (e.g., steroid hormones and bile acids) and xenobiotics (e.g., drugs, chemical carcinogens, and environmental pollutants), which may lead to a series of undesirable effects including jaundice, liver dysfunction and carcinogenesis. Several studies show that tolcapone, entacapone, licochalcone A, fructus psoraleae, amentoflavone displayed strong inhibitory effects on human UGT1A1 [1,18-20]. These findings provide a deep understanding of potential drug interactions between above mentioned drugs and UGT1A1 substrates via UGT1A1 inhibition, and will be helpful for guiding reasonable applications of above mentioned drugs and its related medical preparations in the future.

In our paper, products were denatured and spotted on positively charged nylon membranes instead of acrylamidemodified slides. After positively charged nylon membranes were baked at 100°C, some of the pyrimidine bases in the nucleic acid can be combined with the positive charges on the membranes. In the process of PCR products immobilization, no toxic substances were introduced, such as acrylamide monomer and TEMED. According to the three-dimensional polyacrylamide gel microarray technique, preparation of the acrylamide-modified slides is time-consuming [21]. Fluorescent labeled probes, acrylamide-modified primers and the use of Luxscan-10K/A (CapitalBio Company, China) are expensive. Based on the three-dimensional polyacrylamide gel microarray technique, dot blot hybridization, which is a safe, no toxicity and lower cost method, was used in our study. Although, dot blot hybridization analysis requires some labor for the detection of the allele-specific signals, this method is suitable for a large number of samples because a large number of samples can be blotted on one low-priced membrane and the costliest process in dot blot hybridization analysis is DIGlabeled probes.

In summary, we have successfully detected the UGT1A1 gene mutations in 15 Chinese patients with hyperbilirubinemia through dot blot hybridization method. This method will hold significant promise for applications in detection of UGT1A1 gene polymorphisms.

This work was supported by the Medical Science and Technology Development Foundation, Nanjing Department of Health (no. JQX14007) and Jiangsu Provincial Medical Youth Talent.