Trypanosomes are protozoa organisms of major public and economic importance in sub-Saharan Africa causing both human and animal trypanosomiasis [1,2]. The disease transmitted mainly by tsetse fly in this region seriously limits the use of large areas of land for livestock production [3]. The transmission cycle of the disease involves three elements: the mammalian reservoirs of the parasites, the tsetse fly that serves as cyclic vectors for transmission and the pathogenic parasite, the trypanosomes.

The human and animal trypanosomiasis is caused by many species of trypanosomes carried by over twenty species and subspecies of tsetse flies (Glossina spp.). The tsetse fly ingests blood meal from infected hosts and over a period of weeks (approximately 4 weeks) the ingested trypanosome undergoes morphological and physiological transformations in the alimentary tract and salivary glands to become infective metacyclic.

The purpose of this study was to detect and identify the pathogenic trypanosomes in tsetse fly circulating in Oniche Ugbo, a town in delta region of Delta State. The study will highlight the risk of trypanosomiasis in the study area and in addition will help in proper planning of control measures to allow animal farming in this area with vast arable land.

The study was conducted on tsetse flies collected from Onicha ugbo (5º 46’ N, 6º 35’ E), an area that is located in Delta State of South-South region of Nigeria (Figure 1). It has mixed vegetation ranging from mangrove thick forest to rain forest and grasslands. The inhabitants are mainly subsistence farmers rearing mainly pigs, sheep and goats. 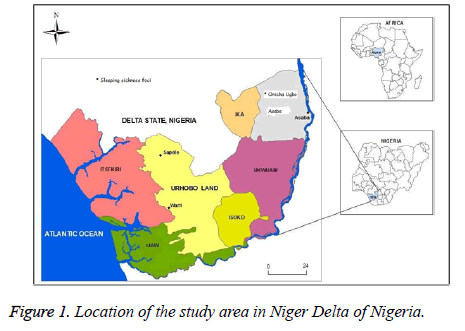 Figure 1: Location of the study area in Niger Delta of Nigeria.

The tsetse fly samples were collected in the geographical area described in study site using pyramidal traps. The traps were not baited. Flies were collected at intervals of twenty minutes to prevent possible escape of trapped flies. The tsetse flies were stored separately at room temperature in 1.8 ml tubes containing absolute alcohol until used for DNA extraction.

The tsetse flies were individually squashed with micro mortar and pestle followed by DNA extraction with Bioneer AccuPrep Genomic DNA extraction kit according to the manufacturer’s instruction. Briefly, squashed fly was transferred into a 1.5 ml tube using a total of 200 μl sterile water, to which 200 μl of proteinase K (20 mg/ml) was added. The tube was incubated at 60°C for 10 min. After mixing the lysate with 100 μl of isopropanol and vortexing, the mixture was transferred into the upper reservoir of the binding column. The column was washed twice with wash buffers 1 and 2 and then centrifuged at 13,400 g for 1 min. The binding column was transferred to a new 2 ml tube and filtered using the wash buffers and then eluted for 5 min with 200 μl of elution buffer into the glass fiber of the binding column and centrifuged for another 1 min at 13,400 g. The eluate from this centrifugation contains the genomic DNA which was stored at 4°C for later analysis.

Identification of different species of trypanosomes was performed by amplifying the internal transcribed spacer one (ITS1) of the ribosomal DNA using technique previously described [9-12]. This method detects eleven pathogenic Trypanosoma species in a single PCR with size differences of the products given as: Trypanozoon (T. b. brucei, T. evansi, T. b. gambiense and T. b. rhodesiense) 480 bp; T. congolense Savannah subgroup 700 bp; T. congolense Kilifi subgroup 620 bp; T. congolense Forest subgroup 710 bp; T. simiae 400 bp; T. simiae tsavo 370 bp; T. godfrey 300 bp and T. vivax 250 bp. Briefly, the amplification was performed in 20 μl reaction vessel containing 3.5 μl Master mix (Promega USA) and 0.5 μl each of primers ( ITS1 CF: 5’- CCGGAAGTTCACCGATATTG-3’; ITS1 BR: 5’- TTGCTGCGTTCTTCAACGAA-3’), 3.5 μl of sterile water and 3.0 μl of gDNA. The vessels containing the reactants were placed in the thermocycler and programmed as follows: an initial denaturation at 95°C for 300 s, was followed by 30 cycles of 95°C for 30 s, 58°C for 30 s and 72°C for 60 s with a final extension at 72°C for 300 s.

The results showed that all tsetse flies collected were G. p. palpalis. Isolation of gDNA from whole squashed fly with AccuPrep Genomic Extraction kit was interesting in the sense that the kit was designed for use in extraction of DNA from whole blood, leukocytes, mammalian tissues or cultured cells. It was successfully adapted for gDNA isolation from tsetse flies. The purity of the nucleic acids were checked by measuring the ratio of A260/A280 at neutral pH. All the values were in the range of 1.6 to 1.9. The incubation time of the squashed fly with proteinase K was critical; incubation less than or 5 min did not extract detectable DNA (Figure 2, lane 6). Ten minutes incubation was ideal to produce detectable DNA on 1.5% agarose gel as seen in Figure 2 (Lanes 1-5). 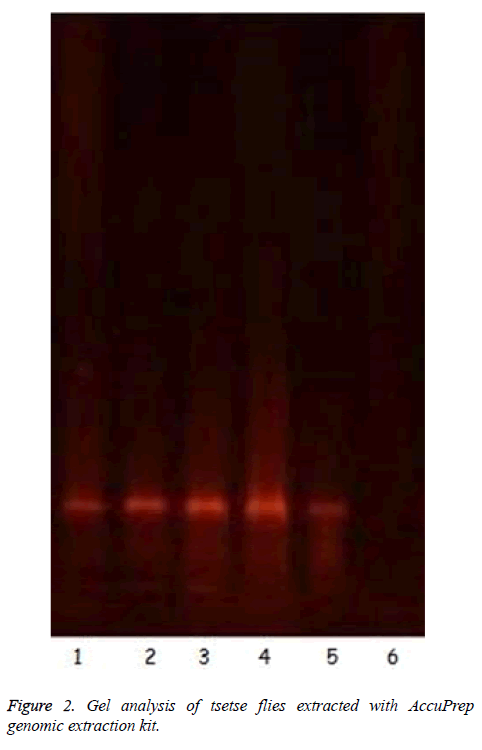 Figure 3 shows a representative result of PCR amplifications of gDNA isolates from tsetse fly using ITS1 BR and ITS1 CF primers. Mixed infections were evident in many of the flies, for example, in the upper panel (Figure 3A) there is evidence of mixed infections in Lanes 2 and 4. The lower panel, Figure 3B, shows that many of the flies were indeed infected. There is no observable pattern of mixing, any of the parasites coexisted, and however, T. vivax and T. congolense were seen more frequently either existing alone or in combination with each other or with other parasites. 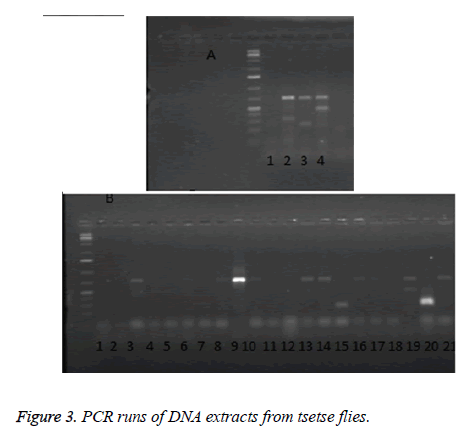 Amplification of Trypanozoon with T. b. gambiense specific primers did not show positive result.

Several species of tsetse flies are known to exist in nature of which about eleven species have been reported in Nigeria [16]. These species infest approximately 70% of the land mass of Nigeria, however, information on the biodiversity and distribution are scanty [17]. Generally, tsetse flies are grouped into three main subgroups depending on the environment they inhabit, thus the palpalis spp are mostly found in riverine areas, the morsitans spp. in the savannah vegetation and fuscipes spp. are forest-dwelling [18]. Our study showed that only G. palpalis was trapped in the study area. A similar study in northern Nigeria revealed that Wuya in north west of Niger State with savannah grassland was also colonized by G. palpalis while Yankari game reserve in Bauchi state, north East which also have savannah vegetation with patches of woodland hosts G. m. morsitans and G. tachnoides [19], thus there appears to be no exclusivity in tsetse flies distribution between riverine and savannah vegetation of Nigeria.

The main issue we addressed in our study was identification of trypanosomes in the flies, hence, our decision to use DNA probes based on repetitive DNA elements. This technique allowed the identification of subgenus of trypanosomes [20-22]. The major trypanosome species associated with dissemination of animal trypanosomes, namely T. vivax, T. congolense, T. simiae and T. brucei were all identified in our study area. The most frequently encountered trypanosomes were mostly those of the cattle, T. vivax, T. congolense, and T. brucei. The trypanosomes were found either singly or mixed in the tsetse flies. Mixed infections have been previously documented in multiple trypanosome species [23,24] and were interpreted to mean either due to high probability of chronic infection in susceptible host or high chances of trypanosome infections by tsetse flies or even both. Theoretically, it may be concluded that the presence of these trypanosomes in the tsetse flies implied active transmission of the organisms, however, the presence of parasite DNA does not necessarily translate to the presence of mature, transmissible organisms and therefore is not a direct indicator of risk [25]. We, thus, can only conclude that the molecular identification allowed us to identify trypanosomes species circulating in the study area.

The authors declare that there is no conflict of interest regarding the publication of this paper.