Aims: Lactobacillus acidophilus is a potentially probiotic bacteria which added to food products as a probiotic starters to create taste and capabilities such as health-giving and so by this path they enter the food chain of humans. Furthermore, these microorganisms can be identified and isolate in traditional products. In this study tried to identify and isolate the Lactobacillus acidophilus in traditional Doogh samples from Tabriz region in the northwest of Iran.

Material and Methods: The identification of these microorganisms was performed using biochemical tests and molecular method by PCR. Randomly 42 samples were collected from the area, eventually 15 isolates were identified as Lactobacillus acidophilus. To study the antimicrobial activity of cell-free supernatants of isolates against Staphylococcus aureus (ATCC 25923), Shigella dysenteriae and Escherchia coli (ATCC 25922) well diffusion method was used and the inhibitory effect on the growth of pathogenic bacteria was established.

Results and Conclusion: Isolated isolates showed different inhibitory effects so that the highest antimicrobial effect was observed against Shigella dysentery. The results of this study suggest that the isolates isolated from traditional doogh that inhibit the growth of Gram-positive and Gram-negative can be used as new industrial starters.

Lactic acid bacteria are Gram-positive microorganisms which are used as starter cultures in fermented dairy products such as yoghurt, cheese, kefir, etc. in food industry [1,2]. Lactobacilluses is an important genus of lactic acid bacteria [3]. More Lactobacillus genus are classified as probiotics which cause health effects on the body. Lactobacillus acidophilus is one of the most common bacterial species with Probiotic activities [4]. This strain contain health-giving properties such as help to lactose digestion, a control factor for blood cholesterol, preventer against cancer and infectious diseases of the digestive system and etc. [5,6]. Researches have shown that Iranian traditional dairies contain bacteria with probiotic properties and with interesting functional properties. Dairy products known as an ideal product for carrying probiotic bacteria to the human intestine [7,8]. The basic problem of probiotic bacteria is that they are fragile under improper environmental conditions which cause loss of their functional properties [9]. Most compounds found in dairy products such as proteins and fats have protective effect on these microorganisms under acidic conditions of the stomach [10]. Doogh is a fermented dairy drink which is highly consumed by Iranian people, a savory yogurt-based beverage popular in Iran and some Middle East countries is one of these products which can contain bacteria with probiotic properties [11]. This dairy product is an Old Iranian acidic dairy drinks that it can be considered as yoghurts drinks with low viscosity. Many studies were done on the isolation and identification of probiotic strains of lactobacillus from different fermented products. In one study, Lactobacillus bacteria of a native product in southern India called idly were identified by PCR (Polymerase Chain Reaction) and antimicrobial properties of these microorganisms was evaluated. The researchers concluded that the isolates from these products can be show suitable fermented property as a starter and also a good bacteriocinic property [12]. In another study, by molecular methods Lactobacillus species were identified with bacteriocin compounds producing feature from clinical samples and food products [13].

The aim of this research was to identification and isolation of Lactobacillus acidophilus from traditional doogh samples, which collected from Tabriz region, and evaluation of the antimicrobial activity of these isolates against some bacteria with pathogenic features. For primary identification, biochemical tests were performed and then molecular method as effective method was used to verify phenotypic identification of Lactobacillus acidophilus from doogh samples.

40 samples of doogh from the Tabriz area in the Northwest of Iran was collected in icebox and immediately were transported to the laboratory, then kept at 4°C until analysis.

Identification and isolation of Lactobacillus acidophilus

One ml of each sample was added to 9 ml of 0.1% peptone water in test tubes and then dilution steps was conducted by peptone water until 10-5 Dilution. Samples which diluted was cultured on MRS (DE MAN, ROGOSA, and SHARPE) agar medium then incubated at 37°C for 48 h under anaerobic condition [14]. To prevent the growth of yeast in cultures, 0.1% fluconazole was added to cultures. To obtain pure colonies, streak culture was performed on MRS-Sorbitol agar from each colonies which growth on primary MRS medium. After purification of colonies gram staining and biochemical tests were performed [15].

The colonies grown on culture were examined using gram staining kit according to Collins and colleagues method then observed under light microscope by magnification of 100X [16].

A single isolated colony was used to perform this test. The bacteria picked by loop on a glass slide and one drop of 3% hydrogen peroxide (Merck, Germany) were added on to it. Production of oxygen in reaction indicated the positive response of the bacteria to catalase test. The colonies, which were gram positive and catalase negative, were selected for carbohydrate fermentation test.

Those isolates which appeared to be rod-shaped, Grampositive, non-spore forming, non-pigmented, catalase negative and grown under anaerobic condition were confirmed to belong to the genus lactobacillus.

The fermentation of carbohydrates (trehalose, raffinose, lactose, galactose, maltose, rhamnose, xylose, mannose, salicin, sucrose, mannitol and cellobiose) was performed according to Bergey's Manual of Systematic Bacteriology to identify all isolated isolates which was gram positive and catalase negative and anaerobically grown at 37°C [17]. For this test Phenol red broth base medium was used.

DNA extraction: The DNA of the bacteria was extracted from single colonies which grown on MRS agar (DE MAN, ROGOSA, SHARPE agar, Merck, Darmstadt, Germany) medium [15]. DNA extraction was performed by tissue buffer and according to previous methods [18,19]. Tissue buffer Compounds comprise Sodium Dodecyl Sulfate (SDS) and NaOH. 20 ml of tissue buffer shed in eppendorf and some bacterial colonies add to tissue buffer solution then eppendorf was placed at 95°C on hotplate for 10 min. Finally, solution centrifuged for 1 min at 13000 g and 180 ml of deionized water was added to it, extracted DNAs were taken immediately to -70°C freezer.

Table 1. Lactobacillus acidophilus allele- specific primers, which were used in this study.

Reaction mixture consist of Primers, MgCl2, 10X PCR buffer, dNTPs, extracted DNA, distilled water and Taq polymerase in a final volume 25 microliter. The PCR program started with an initial denaturation at 94°C for 4 min, followed by 35 cycles of 94°C for 30 s, 56°C for 45 s and extention step 72°C for 1 min and final extention step was adjusted at 72°C for 4 min [20,21]. PCR products were separated with agarose gel (1.5% w/v) and Amplified fragments visualized by staining with ethidium bromide.

Evaluation of the antimicrobial activity of isolated Lactobacillus acidophilus isolates

In this study, antimicrobial activity of isolated isolates was investigated against pathogenic bacteria such as Staphylococcus aureus ATCC 25923, Shigella dysenteriae and Escherchia coli ATCC 25922. To assess the antibacterial activity of the Lactobacillus acidophilus supernatant, well diffusion assay was performed on Mueller-Hinton agar (Merck, Darmstadt, Germany) [22].

Lactobacillus acidophilus isolates isolated from traditional doogh samples were cultured on MRS-Agar then incubated in anaerobic condition at 37°C for 48 hours. Single colonies were transferred in MRS Broth and incubated for 3 days at 37°C [23]. The culture was then centrifuged at 6,000 xg at 4°C for 20 minutes. Finally, the supernatant was sterilized using 0.2 μm micro-filters to remove any residual bacterial cell. This cell free supernatant was used to evaluate antimicrobial activity.

Furthermore, the pathogenic bacteria were cultured in Tryptose Soy Broth and incubated at 37°C for 24 hours to prepare a turbidity equivalent to 0.5 McFarland standards, approximately to reach Microbial populations about 106 CFU/ml. Then, each pathogen was streaked on the surface of Muller-hinton agar. A sterile Pasture pipette was used to make well (5 mm diameter) on the surface of streaked agar.

Finally, about 100 μl of the prepared supernatant was put inside each well. Plates were incubated at 37°C for 24 hours, after this period, growth inhibitory zone was measured. To increase the sensitivity and accuracy, each test was performed in triplicate and the mean diameter for inhibitory zone was recorded [24]. 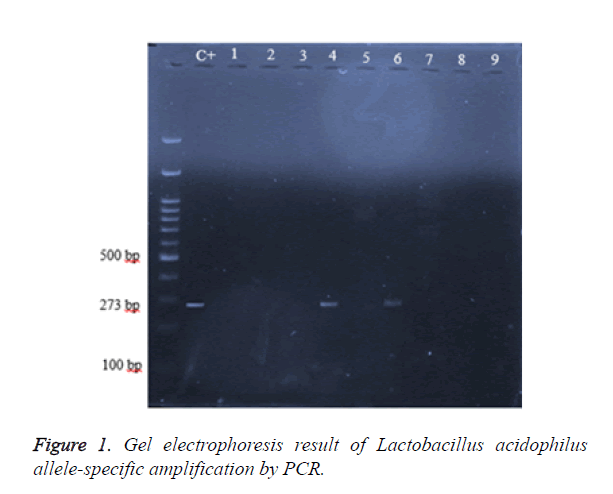 To evaluate the antimicrobial activity of isolated isolates against Staphylococcus aureus (ATCC 25923), Shigella dysenteriae and Escherchia coli (ATCC 25922), well diffusion method was used. The inhibition zone was measured and then the results were reported as the mean diameter of inhibition halos in Table 2. Lactobacillus acidophilus, which isolated from traditional doogh samples, had a growth inhibitory activity against pathogenic bacteria, showing different inhibition zone against each one. Thus, the larger halos were observed against Shigella dysenteriae with the mean diameter of inhibition zone about 21.00 mm. 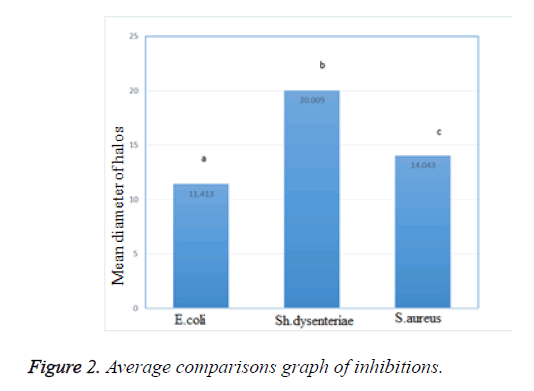 The results of this study indicate that some Lactobacillus acidophiluses isolated from traditional doogh have significant inhibitory effect on the growth of pathogenic microorganism as shown in Figure 3. 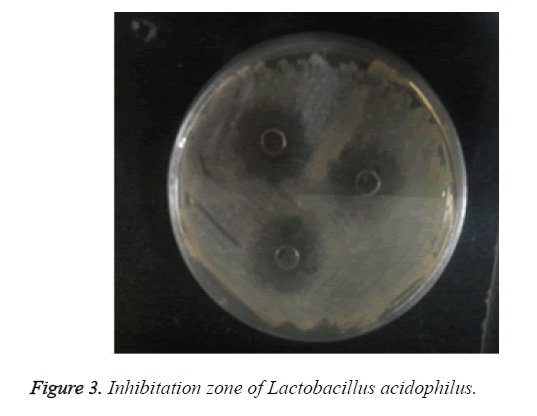 The main objective of this study was to identification and isolation of Lactobacillus acidophilus as a probiotics potential source from traditional doogh by molecular PCR analysis. By this authentication method, from 65-isolated Lactobacillus genus, finally 15 isolates were identified as Lactobacillus acidophilus by PCR and amplification of the target gene. But the final and most important goal of this study was to determine the antimicrobial activity of Lactobacillus acidophilus isolates which was detected by PCR. All isolates showed antimicrobial effect against the pathogens used in this test. The antimicrobial activity of isolated Lactobacillus acidophilus isolates from traditional doogh was showed weak effect (less than 12 mm) against Escherchia coli. The antimicrobial activity against Staphylococcus aureus strain was reported medium (less than 15 and more than 12 mm). However, greatest antimicrobial effect of strains was reported against Shigella dysentery with an average diameter of inhabitation zone of 20.1 mm. According to average comparisons graph, significant difference was observed between the mean inhibition zone of Shigella dysentery (20/0093) with other bacteria and so significant difference between the mean inhibition zone of Staphylococcus aureus (14/043) with Escherchia coli (11/413) existed (p>0.01). This antimicrobial effect may be inflicted by production of lactic and acetic acids and consequently reduce the pH, diacetyl, hydrogen peroxide, fatty acids, and most importantly may be applied by production of antimicrobial compounds such as bacteriocins.

The results of this study suggest that the isolates isolated from traditional doogh that inhibit the growth of Gram-positive and Gram-negative can be used as new industrial starters.