Bovine colostrum (BC) is a rich source of bioactive com-ponents reported to have health promoting effects. The purpose of the present study was to determine the effects of six-week supplementation of BC on the production of gamma-interferon (IFN-γ) by mitogen-stimulated periph-eral blood leucocytes (PBL) in active adolescent male. Subjects were recruited from the students who were un-der-going regular athletics training. The subjects were randomly assigned into control and experimental groups. The control group (n=18) received daily supplementation of skim milk while the experimental group (n=18) re-ceived bovine colostrum (20 g/day). Fasting venous blood samples were collected on day-0 and day-42 for measurement of IFN-γ produced by concanavalin A (Con A)-stimulated PBL. Interferon-γ levels were quantified using ELISA. Changes in IFN-γ levels from baseline to endpoints for both groups were compared and presented as mean (± SD). Although baseline levels of cytokine concentrations were similar in both groups, there was a decreasing trend in IFN-γ production by the mitogen-stimulated PBL from subjects who received the bovine colostrum supplement compared to controls. The find-ings of the present study suggest that oral supplementa-tion of bovine colostrum for a period of 6 weeks may modulate in vitro IFN-γ? concentration

Colostrum is a natural product that provides passive im-munity against a host of microorganisms in breast-fed newborns [1]. Bovine colostrum (BC) is reported to con-tain basic nutrients such as carbohydrates, fat, amino ac-ids, vitamins and minerals as well as a mixture of bioac tive components postulated to boost the immune system [2]. The immunomodulatory components of BC includes

cytokines that promote both cell-mediated (Th1) and hu-moral (Th2) immunity such as interleukin 1-beta (IL-1β), interleukin-6 (IL-6), IFN-γ, and tumour necrosis factor-alpha (TNF-α) [3]. Interferon-γ? coordinates a diverse array of cellular programs through transcriptional regula-tion of immunologically relevant genes and it is reported that the bovine colostrum contains high levels of IFN-γ [3]. It has been suggested that IFN-γ orchestrates leuco-cyte attraction and directs growth, maturation, and differ-entiation of many cell types [4-6]. In addition, IFN-γ has been shown to enhance killing by natural killer (NK) cells [7] as well as regulate B-cell functions such as immu-noglobulin (Ig) production and class-switching [4,8].

Bovine colostrum has been well accepted as a functional food supplement over the past decade. Scientific evidence suggests beneficial effects of BC supplements in improv-ing body composition and athletic performance [9]. However, there is a lack of published evidence on the immunomodulatory effects of orally administered BC in active male adolescents. Hence, the present study was designed to assess immune response enhancing effects of BC supplement and specifically to study the enhancement in IFN-γ production by mitogen-stimulated PBL in the active adolescent males.

A total of 40 active adolescent male volunteers aged be-tween 13 to 16 years-old were recruited from the Bukit Jalil Sports School, Kuala Lumpur, Malaysia. The inclusion criteria used include subjects that do not have any known health problems, any medical contraindication or history of any endocrine disorders that requires drug ther-apy. In addition, subjects must also be actively involved in sports training for a period of more than three-years. Subjects with a history of gastrointestinal tract disease and food allergy (lactose or cow’s milk protein intoler-ance) were excluded. The subjects were asked to refrain from taking other food supplements and to maintain their usual eating habits throughout the study period. This study was conducted according to the guidelines laid down in the Declaration of Helsinki and all procedures involving human subjects/patients were approved by the Medical Research and Ethics Committee, Universiti Ke-bangsaan Malaysia (UKM 1.5.3.5/244/SPP2). Written informed consent was obtained from all subjects and their parents.

All subjects were instructed to maintain their current lev-els of exercise during the six-week study period. The coach was also informed not to substantially alter their training regime for the 6-week study duration. The train-ing was designed by the school coach, certified by the national coach and the subjects were trained for 2-3 hour/day in the morning and evening. The daily training consisted of a general warm-up and stretching, technical-tactical training, and simulated full or half hockey games and lastly a cool-down phase.

The volunteers were randomly assigned to control and experimental groups. The subjects in the experimental group ingested a liquid preparation containing 20 g of IgG- rich bovine colostrum powder (IgG plus™ Smart-Naco, Malaysia) while those in the control group were given liquid preparation of 20 g of skim milk. The BC or skim milk given to subjects over the period of six weeks were prepared in the form of a chocolate shake liquid as described elsewhere [10]. Briefly, the BC or skim milk was mixed with local chocolate malt beverage and 100 ml water at temperature not above 50°C as heat per se may interfere with the bioactive properties of colostrum [1]. The premixed drinks served to the subjects were identical in appearance. The BC and skim milk powder used in this study are commercially available products approved by the Malaysian Ministry of Health. Twenty-four hour dietary recalls were obtained from all subjects on a ran-dom day at the beginning and end of the six-week study. The caloric and macronutrient intake of each subject were ascertained via computerised analyses using Nutrical, a computerised version 1.02 of the Nutrient Composition of Malaysian Foods [11].

Fasting venous blood samples were collected on day-0 and day-42, i.e. at the start and end of the study for each subject. The subjects were refrained from any strenuous physical activity a day before the blood collection. Pe-ripheral blood leucocytes were isolated from heparinised blood using the red blood cell (RBC) lysis technique. Briefly, the heparinised blood collected from subjects was aliquoted into 15 ml conical tubes and RBC lysis buffer (G-Dex™ II RBC Lysis Buffer – iNtRON Biotechnology, Seoul, South Korea) was added. The tubes were inverted a few times to ensure mixture was homogenous and incu-bated at room temperature for 3 minutes to allow the lysis of the RBC to take place. Later, ice-cold phosphate buffer solution (PBS) was added to stop the reaction and the tubes were centrifuged at 4000 rpm for 10 minutes at 4°C. The supernatant was discarded and the cells were washed with cold PBS (Sigma-Aldrich Inc, Missouri, USA). The centrifugation step was repeated and the pel-let containing leucocytes was resuspended in 5 ml RPMI-1640 containing 5% (v/v) of fetal bovine serum (FBS), penicillin, streptomycin and L-glutamine (Gibco, Invitro-gen Corp, New Zealand). The tubes were kept on ice and cell count was performed using a haemocytometer (Neubauer Dytnatech, Germany). Blood leucocyte cul-tures were carried out on day 0 and 42. The cultures were incubated for 24, 48 or 72 h at 37°C in a humidified 5% CO2 atmosphere, in the presence of Con A (Sigma-Aldrich, Inc., St Louis, MO, USA). Culture supernatants were collected and stored at –80°C until assayed for IFN-γ production.

The amount of IFN-γ produced in the PBL cultures by Con A on days 0 and 42 were quantified using a human IFN-γ ELISA kit as recommended by the manufacturer (eBioscience, San Diego, CA). The amount of IFN-γ produced by the Con A-stimulated PBL is expressed as pg/ml. The detection limit of this ELISA kit was 8 pg/ml. The concentration of plasma IFN-γ was also determined using the same method.

All statistical analyses were performed with SPSS statisti-cal software, version 16.0 (SPSS Inc, Chicago, IL, USA). Changes in the IFN-γ levels from baseline (day-0) to end-line (day-42) for both groups were compared and pre-sented as mean values and standard deviations (SD). Data were analysed using two-tailed Student’s t test at P<0.05 for comparison of differences between treatments. Data was also presented with effect size of the treatment based on ANOVA test.

A total of thirty-six subjects were presented for the IFN-γ measurements. Table 2a shows the mean value of base-line and endline measurements of IFN-γ for the experi-mental group while Table 2b shows the same for the pla-cebo group. Two subjects did not make it on day-42 for blood withdrawal and another two subjects had readings beyond the detection range of the kit. 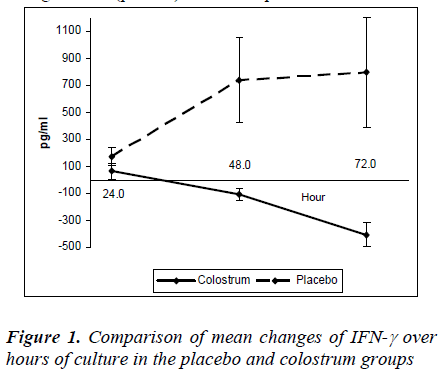 Figure 1: Comparison of mean changes of IFN-γ over hours of culture in the placebo and colostrum groups 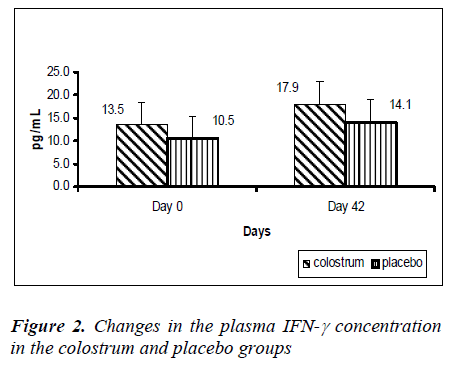 Figure 2: Changes in the plasma IFN-γ concentration in the colostrum and placebo groups

Bovine colostrum has been shown to possess some poten-tial activity in enhancing specific immune responses in humans [2,12]. Some studies have reported that BC sup-plementation can protect children and adults against in-fectious diseases and diarrhoea [13,14]. Several cytokines have been found in BC, including both pro-inflammatory cytokines such as IL-1β, IL-6, TNF-α, IFN-γ [15], as well as anti-inflammatory components, such as IL-1ra, sIL-1RII and sCD14 [16,17]. Immune interferon or macro-phage activating factor, IFN-γ is the only Type II inter-feron, which has antiviral, immunoregulatory and anti-tumour properties [18].

In the present study, we observed a dissimilar trend in the production of IFN-γ by the Con A-stimulated peripheral blood leucocytes in BC supplemented individuals when compared to the control group who only received skim milk. In the group supplemented for six-weeks with BC, a downward trend in the production of IFN-γ was observed when the Con A-stimulated PBL were cultured for 72 h compared to the initial 24 h. An opposite trend was ob-served with the Con A-stimulated PBL from individuals who were only supplemented with skim milk for the six-weeks. Alternatively, the production of IFN-γ at the sys-temic level shows a trend towards an increase in the BC group. The specific reasons for this reduction are uncer-tain and remain speculative. Shing and co-workers [19] have shown that the bovine protein concentrate (BPC) could promote production of IFN-γ when peripheral blood mononuclear cells (PBMC) isolated from healthy athletes were co-cultured with 5% BPC and stimulated by lipopolysaccharide (LPS) or phytohaemagglutinins (PHA). While, Biswas and co-workers [19] observed different patterns in IFN-γ production when PBMC was stimulated by BC as they found that this could not signifi-cantly inhibit production of cytokines [20].

In summary, the present data demonstrated that 6 weeks of oral supplementation with 20 g/day of BC to the trained and healthy young adolescents could modulate in vitro IFN-γ concentration. However, the specific mecha-nism responsible for the observed change still remains unclear. Further research is, therefore required to eluci-date the immune enhancement mechanism(s) stimulated by BC supplementation.

The authors wish to acknowledge the assistance of the following individuals in this research project: Ms Kalaivani Thiagarajah, Dr Suthakar, Mr Zaid, Ms Nor Hasnizan, and Ms Nor Azhani. Appreciations are also due to the management of Bukit Jalil Sports School and all athletes for their participation in the study. The au-thors also wish to thank SmartNaco Sdn Bhd. (M), Pro-mec Sdn Bhd. (M), UiTM and UKM for research funding and support. Authors also wish to acknowledge Professor Amar Chatterjee for his valuable advice and very useful suggestions provided in the preparation of this manu-script.