Crohn's disease is a chronic, recurrent autoimmune disease characterized by dysregulation of immune function in the gut. Although the exact etiology has not been fully elucidated, it is now recognized that the environment, genetics, infection and immune disorders are all involved in the development of Crohn's disease [1]. Previous studies have demonstrated that the status of antigen-presenting cells is closely associated with changes in the number of regulatory T (Treg) cells [2,3]. As the most important class of antigen-presenting cells, dendritic cells (DCs) play an important role in regulating T cell activation. While mature Dendritic Cells (mDC) induce the differentiation of naive T cells into T helper 1 (Th1) and T helper 17 (Th17) cells to promote immune responses, immature Dendritic Cells (imDC) promote the differentiation of naive T cells into Treg cells to down-regulate immune responses [4]. It has been reported that interleukin-10 (IL-10) is an immunosuppressive cytokine that holds DCs in a stable immature stage, and thus plays an important role in facilitating naive T cell differentiation into Treg cells [5]. The goal of the current study was to investigate the use and possible mechanism of IL-10 gene-modified imDC in treating TNBS-induced Crohn's disease in mice.

Fifty 6-8 week old female Balb/c mice were purchased from the Experimental Animal Center of Wuhan University (license number: SCXK (E) 2014-0004). All animals were housed in the animal facility under SPF conditions in the Remin Hospital of Wuhan University. Ten of these mice were used for the isolation and in vitro culture of dendritic cells.

The experimental research methods were approved by the Institutional Ethics Committee of Renmin Hospital of Wuhan University (approval number [2015]28.

Isolation, induction and transfection of mouse bone marrow-derived dendritic cells: Mice were sacrificed by cervical dislocation and cells were prepared according to a modified method reported previously [6]: Bone marrow mononuclear cells were collected and cultured in RPMI 1640 containing 10% fetal bovine serum at 1 × 106 cells/ml, 4 ml/ well of a 6-well plate. Each well was supplemented with rmIL-4 (10 ng/ml) and rmGM-CSF (10 ng/ml), and the cells were cultured in a 37ºC incubator with 5% CO2. On day 3, 2 ml of the culture medium from each well was transferred to a new 6-well plate and 2 ml fresh cytokine-containing medium was then added to each well of the original and the new plates. DCs were collected on day 5 and washed twice with PBS. A portion of the cells was returned to culture in complete medium without any treatment. The remaining cells were transferred to a 24-well plate at 1 × 106 cells/well in 500 μl, transfected with recombinant adenovirus carrying LacZ or IL-10 at an MOI of 1:100 and cultured in a 37ºC incubator with 5% CO2. The cells were washed 2 h later, resuspended in complete medium and returned to 37ºC, 5% CO2 incubator for 24 h. Transfection efficiency was observed under an inverted fluorescence microscope, and the cells were harvested and counted. Three types of cells were produced by the methods described above, namely imDC, LacZ-imDC and IL-10-imDC.

Detection of DC maturation by flow cytometry: Cells with a density of 1 106 cells/ml were collected and resuspended in 100 μl medium containing anti-mouse PE-Cy7-CD11c, PE-CD80, APC-CD86 and FITC-MHC-II antibodies. The cells were incubated in the dark for half an hour and washed twice with PBS for flow cytometry analysis.

Generation of animal model and treatment groups: The mouse model was established according to a previous study [7] with modifications: after 7 days of acclimation, mice were allowed only drinking water for 24 h. The animals were stimulated to promote defecation before TNBS enema. A 3.5 F catheter (smeared with medical paraffin oil) was inserted into the intestine via the anus to a depth of about 5 cm. Each animal was slowly injected with 0.1 ml of TNBS/50% ethanol solution of (1:1 mixture of TNBS solution and anhydrous ethanol). The mice were kept in head-down position for 1 minute after catheter withdrawal. After successful TNBS administration, the 40 mice were randomly divided into control group, immature dendritic cell treatment group (imDC group), LacZ gene modified immature dendritic cell treatment group (LacZ-imDC group) and IL-10 gene modified immature dendritic cell treatment group (IL-10-imDC group), with 10 mice per group. At 24 h after disease induction, mice were given intravenous injections of 100 μL of PBS for control group, untransfected imDC for imDC group, LacZ adenoviral transfected imDC for LacZ-imDC group, and IL-10 adenoviral transfected imDC for IL-10-imDC group, at approximately 1 × 106 cells per mouse.

Disease severity rating: The psychological condition, stool consistency, presence or absence of bloody stools and body weight of the animals were observed and recorded daily. Mice were sacrificed on day 7 after disease induction for further analysis of other relevant indicators. Disease Activity Index (DAI) was scored according to published standards [8].

DAI scores were the combined scores of stool consistency plus stool blood plus body weight change.

Intestinal tissues of the affected regions were harvested under a dissecting microscope, fixed in 4% paraformaldehyde, embedded in paraffin and sectioned for HE staining. Pathological scoring was conducted by two researchers of the study based on the standards from the literature [9].

Detection of the percentage of splenic Treg cells by flow cytometer: Mouse spleens were collected and ground on a 200 mesh screen with a syringe plunger while being rinsed with PBS. After centrifugation, the cells were resuspended in 4 ml PBS and slowly laid over 8 ml lymphocyte separation solution along the wall of the test tube. The tubes were centrifuged at 2000 rpm (rotor radius: 10 cm) for 20 min in order to isolate cells from the middle cloud-like layer. After washing with 10 volumes PBS by centrifugation, cells were resuspended in PBS, counted and adjusted to 1 × 106/ml. FITC-CD4 and APC-CD25 monoclonal antibodies were added to 100 μl cell aliquots, incubated in the dark for half an hour, washed twice with PBS and fixed in 4% paraformaldehyde for flow cytometry analysis.

Dendritic cells were successfully differentiated from bone marrow cells by rmIL-4 and rmGM-CSF induction. They were transfected with at an MOI of 1:100 recombinant IL-10 adenovirus or control recombinant LacZ adenovirus, with a transfection efficiency of about 70%. Increased expression of EGFP in transfected cells was observed under a fluorescence microscope (Figures 1 and 2). 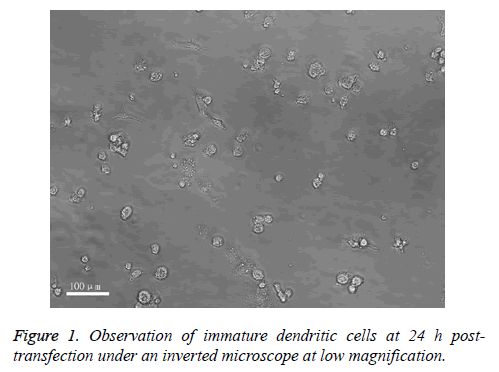 Figure 1: Observation of immature dendritic cells at 24 h post-transfection under an inverted microscope at low magnification. 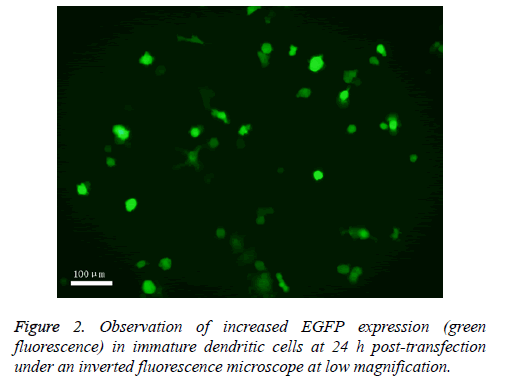 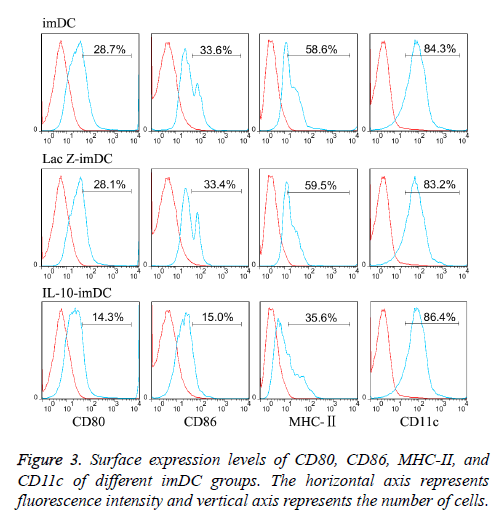 Pathological analysis of the colon tissues from each group of mice indicated that while TNBS-treated control mice had severe inflammatory cell infiltration throughout the mucosal layers, severe mucosal damage and disruption, disappearance of glandular structure and deep ulceration into the muscularis mucosa, these pathological changes were slightly improved in the imDC group and LacZ-imDC group, with distinguishable epithelial cell outlines and the presence of a smaller number of glands. Although there was significant inflammatory cell infiltration, it did not reach muscularis mucosa, and there was no obvious deep ulceration. In contrast, the pathological changes in IL-10-imDC group were much more subdued than the other groups. The mucosa, submucosa, muscularis mucosa and serosa membrane were clearly visible without significant damage or disruption of the mucosal epithelium. There was little damage to the intestinal glands, and inflammatory cell infiltration was significantly reduced compared with the other 3 groups. 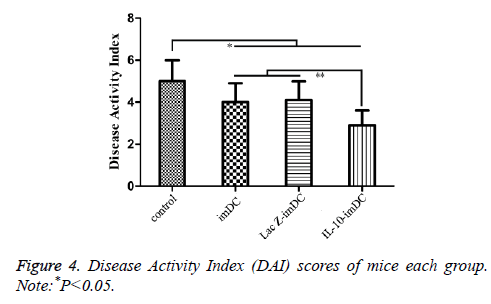 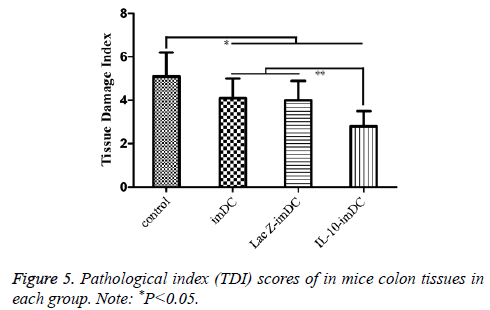 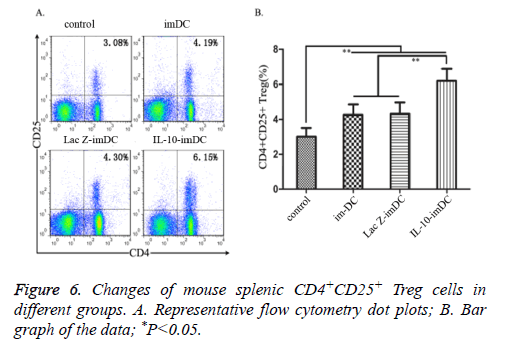 Percentage of mouse splenic CD4+CD25 + Treg cells in each group

Dendritic cells are the most important antigen-presenting cells in the body and play important roles in T cell activation [11]. Studies have shown that mDC express high levels of MHC-II and co-stimulatory molecules CD80 and CD86 and promote the differentiation of naive T cells into functionally mature, pro-inflammatory T cells such as Th1 and Th17 cells [12]. On the other hand, imDCs express low levels of the aforementioned surface molecules, and thus are unable to provide an effective ‘second signal’ necessary for T cell activation, resulting in the generation of immune tolerance [13]. Past studies have shown that imDC may have certain therapeutic effects for treating autoimmune diseases, but the efficacies were far from satisfactory [14]. One of the reasons could be that the complex in vivo microenvironment can induce the maturation of the infused imDC into mDC, thereby switching their function from immunosuppression to immune activation.

Effect of IL-10 on dendritic cells

It has been reported that IL-10 cytokine-treated or IL-10 gene-modified imDCs has a stronger tendency to stay in their immature states [15,16]. IL-10 is a potent immunosuppressive molecule, and plays a vital role in immune regulation. IL-10 can inhibit DC maturation and their ability to function as antigen-presenting cells by reducing the surface expression of MHC-II and co-stimulatory molecules CD80 and CD86 [12]. In this study, IL-10 was successfully transfected into DCs via an adenovirus vector with high transfection efficiency and the modified DCs were examined by flow cytometry. In addition, transfection of the control adenoviral vector carrying the lacZ gene had little effect on DC phenotype and maturation, suggesting that the adenoviral vectors have very low cytoxicity on the DCs [17]. However, IL-10 gene-modified DCs demonstrated significantly reduced surface expression of MHC-II, CD80 and CD86. When DCs remain at the immature stage due to inhibited expression of these molecules, they are unable to provide co-stimulatory signals for T cell activation, and thereby may induce T cell energy and immune tolerance.

We found that administration of IL-10-transfected DCs via tail vein injection significantly ameliorated Crohn's disease in mice, as alleviation of the disease could be observed by both the DAI scores and pathological changes. Although the disease was also reduced in the two groups that received unmodified imDCs or control vector transfected imDCs, the effect was not as profound as that seen in mice given IL-10-imDC, suggesting that IL-10-transfected imDCs may have a greater ability to maintain their immature state in order to sustain their immunotolerant function. Previous studies have shown that in addition to inhibiting effector T cells, another important activity of IL-10 is the induction of CD4+CD25+ Treg cells [18]. To further investigate the specific mechanisms of IL-10- expressing imDCs in this study, changes in mouse splenic CD4+CD25+ Treg cells [19] in each treatment group were examined by flow cytometry. It was found that the percentage of CD4+CD25+ Treg cells in the IL-10-imDC group was significantly higher than those in the other groups. Given that CD4+CD25+ Treg cells are immunosuppressive cells that have an important role in peripheral immune tolerance; previous studies indicated that reduction of CD4+CD25+ Treg cells could be one of the causes for the development of Crohn's disease [20]. In this study, we found that splenic Treg cells were significantly increased in mice given IL-10-imDC, which in turn suggested that increased Treg cells could be one reason for the imDC-mediated alleviation of Crohn's disease.

In summary, we have successfully generated IL-10 gene-modified imDCs, and confirmed reduced levels of cell surface molecule expression by flow cytometry. In a TNBS–induced mouse model of Crohn's disease, inoculation of these cells resulted in significant improvement of disease progression. The underlying mechanisms may be associated with the immune tolerance-inducing function of imDC and upregulation of peripheral CD4+CD25+ Treg cells. These findings may offer better methods and ideas for clinical research of Crohn's disease and shed new light on the prospects of imDC application.

This research was supported by a grant (81170368) from the National Natural Science and Technology Foundation.