We recently repaired a modified extended Karapandzic flaps to reconstruct total or near total lower lip defects. The lower lip reconstructed by this method has good appearance and this method is easy to be master.

Reconstruction of total full-thickness lip defect is a challenging task. There are many methods to finish the hard work. For example, cheek advanced flap, Gillies fan flap, McGregor fan flap, Karapandzic technique, nasolabial flap, free flap and so on. We recently repaired total or near total full-thickness lower lip defect by our modified extended Karapandzic flaps and got satisfactory results. Now we report this new method as follows.

First, make a vertical full-thickness incision along the vertical edge of the lip defect. The length of this incision is the width of our modified extended Karapandzic flaps. Second, make a cambered incision from the end point of the first vertical incision to the lateral of the nasal alar. The lower part of this cambered which is inferior to the commissure is a fullthickness incision and the upper part superior to the commissure is cutaneous incision. Third, make blunt dissection in the subcutaneous and the muscle layer to release the extended Karapandzic flap. Do preserve the nerve and vessel branches in this step. Last, rotate and advance the flap into the defect, sutures the flap layer by layer, and closes the donor site layer by layer.

We should pay attention to the following matters when harvest the modified extended Karapandzic flap.

2) Bluntly dissect the orbicular muscle above the commissure in order to avoid the damage of the nerve and blood vessel bundles.

A 65 y old female came to B.P. Koirala Memorial Cancer Hospital of Nepal for the squamous cell carcinoma of her total lower lip. The lesion involved total lower lip and part skin of the chin (Figures 1 and 2). Under general anesthesia, we make a peripheral extended resection first. Then we use this modified extended Karapandzic flaps to rebuild the lower lip and use tongue mucosa flap to rebuild the vermilion (Figures 3 and 4). The new reconstructed lip shows a good appearance with good oral function and without microstomia and sialorrhea after the principal of tongue flap was cut off (Figures 5-7). 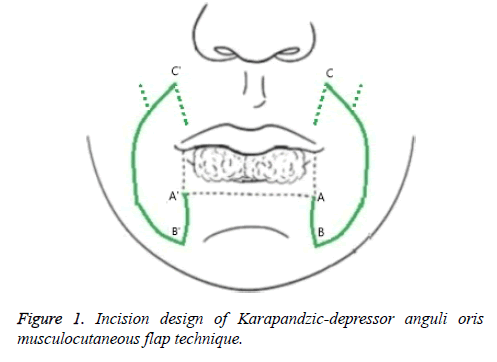 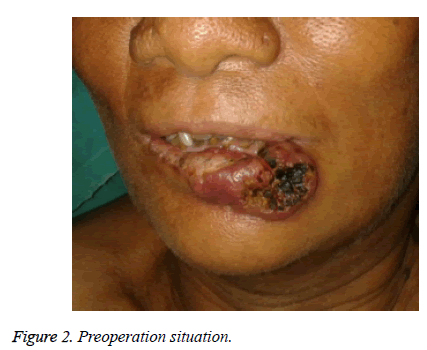 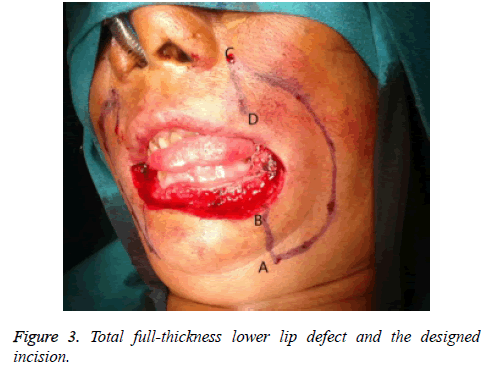 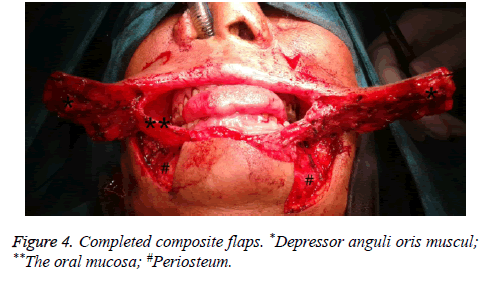 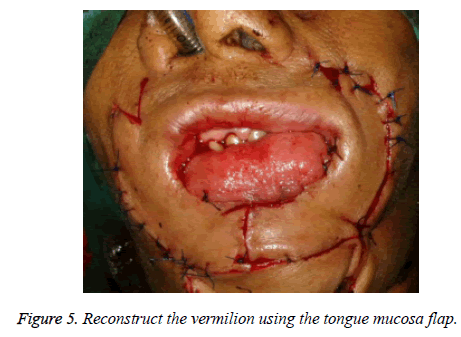 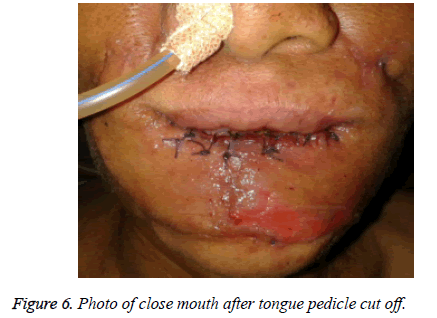 Figure 6: Photo of close mouth after tongue pedicle cut off. 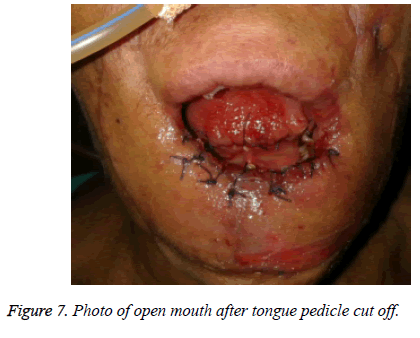 Figure 7: Photo of open mouth after tongue pedicle cut off.

A 57 y old male came to B.P. Koirala Memorial Cancer Hospital of Nepal for a recurrent lower lip squamous cell carcinoma. Almost half of his lower lip was excised. And he then was given a lower lip reconstruction surgery immediately by means of a non-standard Karapandzic technique in which all the neurovascular bundles below the incision were cut off. We found that his recurrent tumor involved all the lower lip and part of the upper lip and an incision scar was located around the mouth. The incision scar reached the point below the left commissure in the left and the point outside the right alae nasi in the right. We gave the patient an extended resection and designed two flaps to rebuild the lower lip (Figures 8-10). One flap on the left was Karapandzic-depressor anguli oris musculocutaneous flap. The other flap on the right was depressor anguli oris musculocutaneous flap only because of the vascular damage in the first non-standard reconstruction surgery. The tongue mucosa flap was used to reconstruct the vermilion just the same as the first patient (Figure 11). The new lower lip looks well and has no functional problem even though the defect after extended resection involved part of upper lip and right cheek except the total lower lip (Figures 12-14). 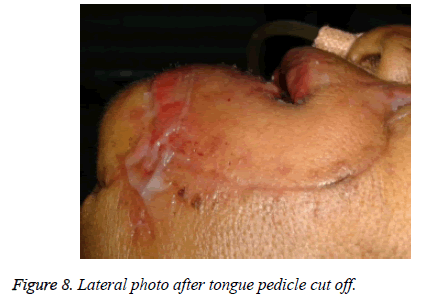 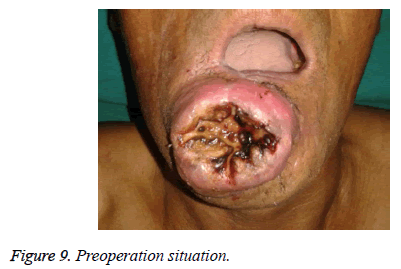 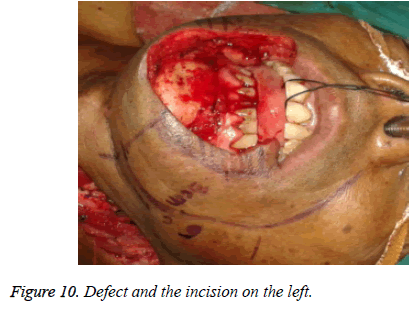 Figure 10: Defect and the incision on the left. 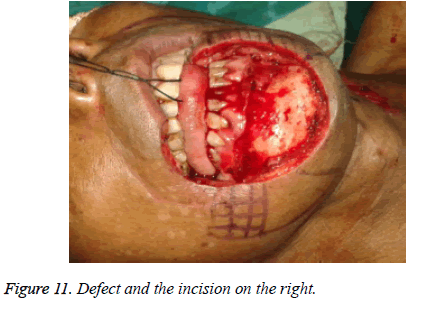 Figure 11: Defect and the incision on the right. 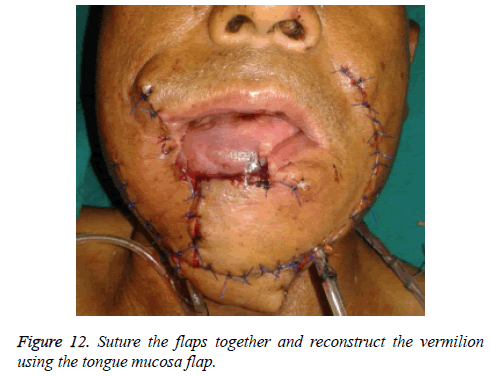 Figure 12: Suture the flaps together and reconstruct the vermilion using the tongue mucosa flap. 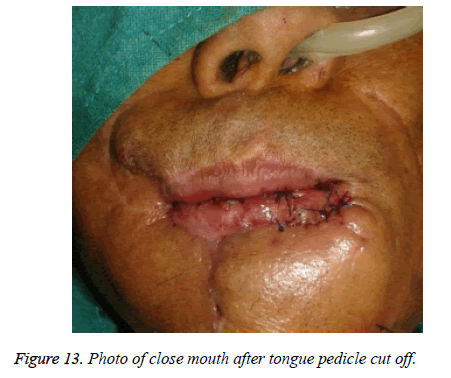 Figure 13: Photo of close mouth after tongue pedicle cut off. 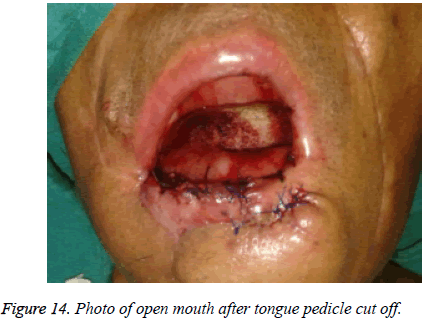 Figure 14: Photo of open mouth after tongue pedicle cut off.

This technique is similar to traditional extended Karapandzic technique and is easy to master. The upper lip and new reconstructed lower lip are balanced by the ring incision in some extent.

Our integrated surgical design applies for total or near total full thickness lower lip defect cases. But if the defect involving the cheek or chin, the flap cannot be adopted. Free flaps are suit for this lip defect with cheek or chin defect cases [12-15]. In addition, the function of the depressor anguli oris muscle should be checked first to determine whether there is a serious muscle atrophy which will reduce the function of these muscles in the reconstructed lip.