Mobile masses within the left atrial cavity are commonly caused by organized thrombi or left atrial myxoma. The use of transesophageal echocardiography has provided means for differentiation between the two conditions. We report a case of a left atrial mass in a middle age male patient having past history of closed mitral commissurotomy presented with mitral stenosis and atrial fibrillation. On transthoracic echocardiography a round mass appeared freely mobile in left atrium but did not prolapse between the mitral leaflets due to the tightly stenosed valve orifice. In the presence of mitral stenosis, atrial fibrillation and dilated left atrium, the appearance of the mass was in keeping with mobile thrombus but possibility of left atrial myxoma cannot be ignored. Consequently, the patient was referred for surgical treatment and the mass removed through left atriotomy. Microscopic examination revealed a highly organized thrombus. We conclude that TTE is still a reliable tool in the diagnosis of large mobile atrial thrombi; TEE may help to differentiate clot from atrial myxoma but histopathological examination is a gold standard.

A 38 year old male with past history of closed mitral commissurotomy ten years back presented with symptoms of shortness of breath, palpitation and facial puffiness. He had longstanding mitral restenosis and atrial fibrillation and was classified as NYHA-III. There was no history of stroke or embolic event in the past. Physical examination revealed a mid-diastolic murmur at the apex. Her ECG showed an atrial fibrillation rhythm, chest x-ray revealed cardiomegaly with dilated LA, Transthoracic echocardiography revealed a large freely mobile round mass in the left atrium (LA), which was partially prolapsing in to the left ventricle (Figure 1). The mass was moving freely in the LA and was bouncing back after striking the mitral valve leaflets like a ball in a pinball machine. Patient was scheduled for surgical removal of the mass along with mitral valve replacement under cardiopulmonary bypass. Intra-operative transesophageal echocardiography (TEE) confirmed the pre-operative findings. 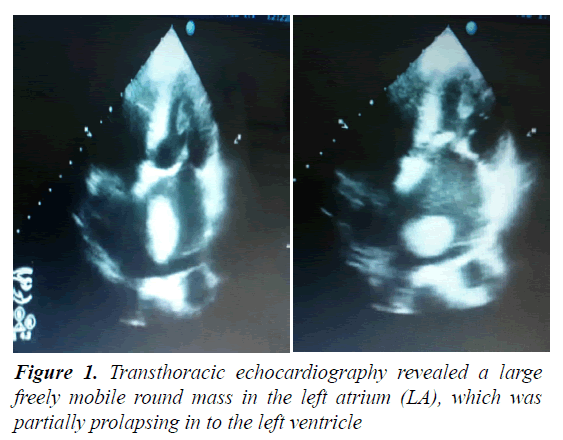 Figure 1. Transthoracic echocardiography revealed a large freely mobile round mass in the left atrium (LA), which was partially prolapsing in to the left ventricle.

At surgery, a large spherical pink colored mass (Figure 2) with a smooth surface was removed (Figure 3). Evidence of peduncle or wall attachment was not demonstrated during surgery. Though this patient has past history of CMC, intraopt we found left atrial appendage opening into left atrium through small partially closed opening. We closed it internally with prolene 4-0 suture. Stenosed mitral valve removed with preservation of posterior mitral leaflet (Figure 4). Mitral valve replacement done with mechanical valve by intermittent 2-0 pledgetted ethibond sutures in horizantal mattress pattern with pledgett on left atrial side. Minimal inotropic support was used during weaning from bypass. Postoperatively, the patient remained hemodynamically stable. Patient ventilated for 5 h and had minimal blood loss. ICU stay was two days, during which intensive chest physiotherapy was performed. Histopathology examination of the mass revealed features consistent with thrombus. The patient was discharged after 8 days on tablet warfarin 5 mg with INR of 2.6. 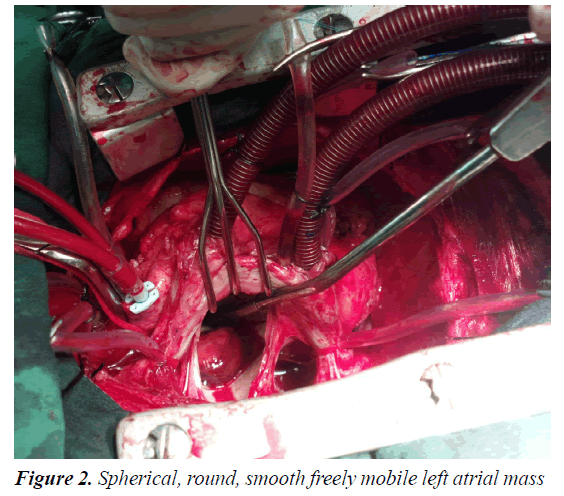 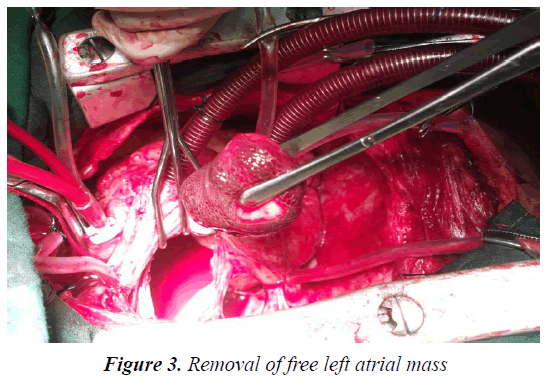 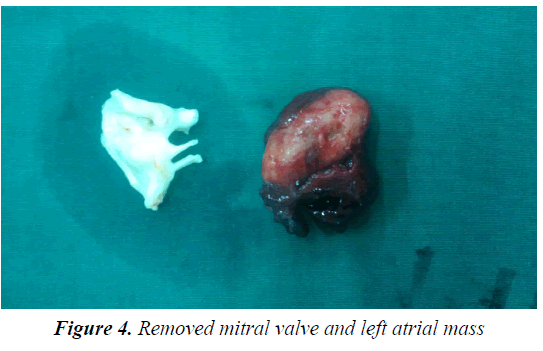 The differential diagnosis for an intra-cavitary cardiac mass includes thrombus, myxoma, lipoma and nonmyxomatous neoplasm [7,8]. Among them, cardiac myxoma is the most common benign primary tumor of the heart and generally found in the LA. On echocardiogram cardiac myxomas typically appear as a mobile mass attached to the endocardial surface by a stalk, usually arising from the fossa ovalis. Cardiac thrombi, which appear more frequently than cardiac myxomas are typically located more often in the LA or LAA and generally occur in patients with organic heart disease.

In the present patient, features were not consistent with thrombus as it was spherical and mobile, surface was smooth and echogenicity was more consistent with myxoma. The present thrombus may have been attached earlier, but got dislodged due to lysis at some stage. Other intra-cardiac masses such as lipoma or non-myxomatous neoplasm are rare. TEE is the extensive diagnostic tool to investigate suspected intra-cardiac mass involving the LA [8] and histopathological examination is gold standard for diagnosis of myxoma [9,10].

To the best of our knowledge this is the only case report of a mitral stenosis with left atrial mass in a patient already having history of closed mitral commissurotomy. In the present patient, features were not consistent with thrombus as it was spherical and mobile, surface was smooth and echogenicity was more consistent with myxoma. Transoesophageal echocardiography imaging provides detailed information of a mobile mass in the left atrium. Surgical removal of a mobile left atrial mass should be performed before the occurrence of a fatal embolism. We conclude that TTE is still a reliable tool in the diagnosis of large mobile atrial thrombi; TEE may help to differentiate clot from atrial myxoma but histopathological examination is gold standard.

Informed consent has been obtained.

No funding was required for this study.

No potential conflict of interest exists.