Methods: First, the expression of miR-200b in HBV-infected liver tissues and HBV-producing HepG2.2.15 cells was detected using Quantitative Real-time PCR (qRT-PCR). We then examined the association between chronic HBV infection and the expression of miR-200b. ELISA assay was used to evaluate the host innate immune response. Further, the potential target genes related to innate immunity of miR-200b were also predicted. Western blot and luciferase reporter assays were performed to confirm the predicted genes.

Conclusions: Our study revealed that miR-200b was related to HBV infection through a pathway involving the MyD88 and IRAK4 and provides new insights into the understanding of mechanisms of HBV-induced immunosuppressive strategy.

Hepatitis B Virus (HBV) is an enveloped, non-cytopathic virus that causes variable degrees of liver disease in humans, including acute and chronic necroinflammatory liver diseases and, subsequently, hepatic cirrhosis and hepatocellular carcinoma [1,2]. Despite the access to a highly effective prophylactic vaccine, 350 million people have been infected with HBV worldwide, especially prevalent in Asia and Africa.

The role of innate immunity in defense against HBV was a matter of debate for a number of years. However, several studies have now provided clear evidence that HBV could be sensed by the immune system early after infection, and viral replication and dissemination is controlled by innate responses [3,4]. Alternatively, in order to establish a chronic infection, HBV may evade this innate response or downregulates antiviral pathways, such as Toll-Like Receptors (TLRs) pathway [5-7]. Thus, it is crucial to the advancement of our understanding to the mechanisms of HBV and host innate immunity interaction.

MicroRNAs (miRNAs) are small non-coding RNAs which are key regulators of many cellular events, including cell proliferation, differentiation, immune response and metabolism [8-10]. Accumulating evidence has indicated that abnormal expression of miRNAs is closely associated with many diseases, including liver diseases [11]. Among those miRNAs, miR-200b is reported to be commonly related to epithelial-mesenchymal transition [12], angiogenic response [13], chemoresistance [14] and female fertility [15]. However, whether miR-200b is involved in regulating HBV-induced host innate immune response remains obscure. Here we demonstrate that miR-200b inhibits TLR4-mediated innate immunity by targeting MyD88 and IRAK4 in HBV infection.

Sixty-two consecutive HBsAg/anti-HBe/HBV-DNA-positive and HbeAg-negative patients with chronic HBV infection underwent a diagnostic liver biopsy from May 2012 to June 2014. None of them had previously been infected with HCV, HDV or HIV and treated with antiviral or immunosuppressive therapies. Twenty-five healthy controls were negative for HBV, HCV or HIV infection and tested normal for Aspartate Aminotransferase (AST) and Alanine Transaminase (ALT). An informed written consent in compliance with the Helsinki declaration was obtained from all the patients. The study was approved by the Ethics Committee of Affiliated Hospital of Hebei University.

Total RNA was extracted from the liver tissues and cells using TRIzol reagent (Invitrogen, Karlsruhe, Germany). cDNAs were synthesized using MicroRNA cDNA kit (Exiqon, Woburn, MA). qRT-PCR was performed using an ABI 7900 cycle detection system. The data were analysed via the comparative Ct (2-ΔΔCT) method. The expression of the miRNAs was normalized to U6 and reported as Arbitrary Units (AU).

Detection of the main clinical indicators

The levels of IL-6 and TNF-α in cell culture supernatants were determined using ELISA kits (R&D Systems, Minneapolis, MN, USA) according to the manufacturer’s instruction.

A fragment of the Wild-Type (WT) or Mutated type (MUT) 3’ untranslated region (UTR) of IRAK4 and MyD88 containing the putative miR-200b binding site were cloned into a BamH I/Sal I site of the pGL3-basic luciferase reporter vector (Promega). For the luciferase assay, 293T cells were cotransfected with pGL3-constructs with or without miR-200b mimics. Forty-eight hours after transfection, luciferase activities were measured using the Dual-Luciferase Reporter Assay System (Promega) and normalized to Renilla luciferase activity.

Experimental data were presented as the mean ± standard deviation with at least three repeats. The statistical significance of differences between groups was evaluated using Student’s ttest and a P-value less than 0.05 was considered statistically significant. 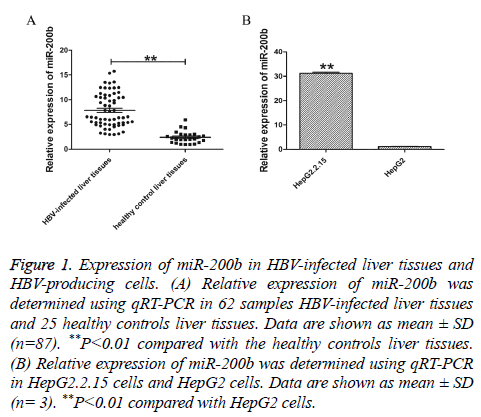 miR-200b expression associated with the severity of liver disease

Table 1: miR-200b expression associated with the severity of liver disease.

Correlation of miR-200b with clinical indicators of patients with CHB 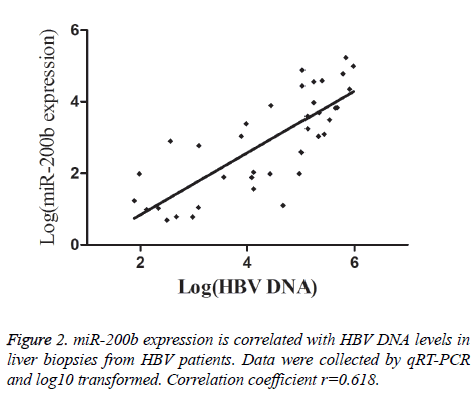 Through bioinformatics software (microRNA.org), we sought to identify its downstream targets and molecular pathways of miR-200b specifically associated with TLR4 pathway. Among the 7,176 mRNA transcripts, IRAK4 and MyD88 were predicted to harbor evolutionarily conserved binding site(s) of miR-200b (Figure 3A). To experimentally validate software prediction results, 3’UTRs of IRAK4 and MyD88 were cloned into a luciferase reporter construct and co-transfected with miR-200b mimics in 293T. We found that co-transfection of miR-200b and pGL3- IRAK4 or MyD88 WT vector significantly decreased the luciferase activity in 293T cells, as compared with the control (P<0.05). However, miR-200b had no effect on the luciferase activity when transfected with pGL3-IRAK4 or MyD88 MUT vector (Figure 3B). We observed a dramatic decrease of IRAK4 and MyD88 protein level in HepG2.2.15 cells transfected with miR-200b mimics compared with the negative control (Figure 3D, P<0.05). Meanwhile, knockdown of miR-200b in HepG2.2.15 cells could obviously increase IRAK4 and MyD88 protein level. 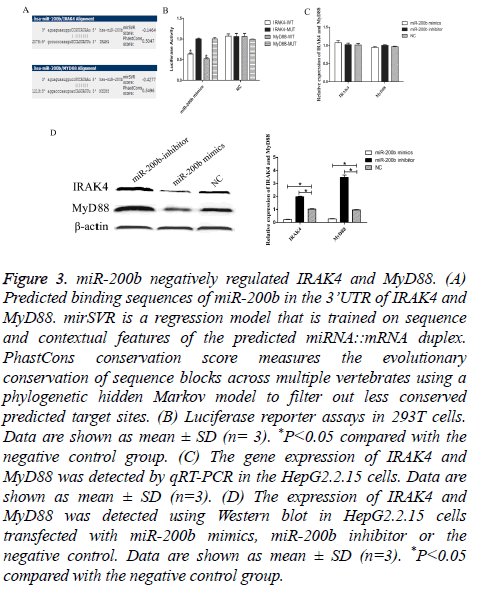 To elucidate the effect of miR-200b on TLR4 pathway mediated innate response, ELISA assay was performed to analyse the expression levels of IL-6 and TNF-α in vitro. After 24 h transfection, cells were stimulated with LPS (200 ng/ml) for 24 h and cell culture supernatants were collected. As shown in Figure 4A, the levels of IL-6 and TNF-α were obviously increased in HepG2.2.15 cells transfected with miR-200b inhibitor compared with the negative control (P<0.05). 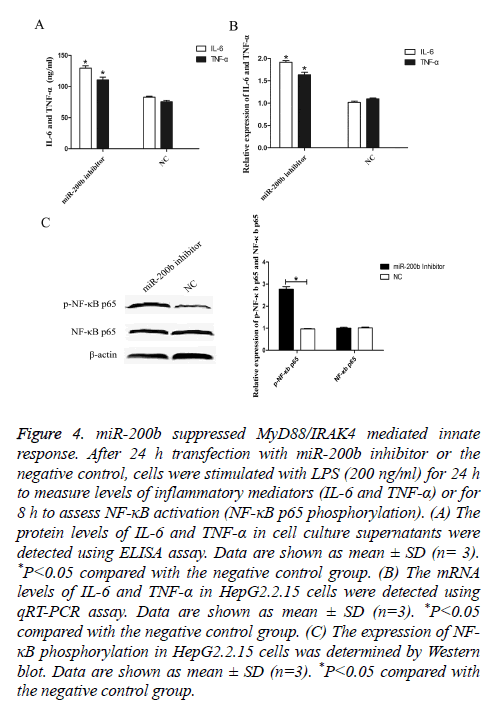 Moreover, similar findings were also observed in the mRNA levels of IL-6 and TNF-α as demonstrated by qRT-PCR (Figure 4B, P<0.05). In addition, knockdown of miR-200b augmented the expression levels of phosphorylated NF-κB p65 compared with the negative control (Figure 4C, P<0.05). These results indicated that miR-200b may promote HBV infection through suppressing MyD88/IRAK4 mediated innate response.

Innate immunity represents the first line of defense against HBV. HBV could interact with the host’s innate and adaptive immune responses to establish chronic infection. The study demonstrated that TLRs are essential for the recognition of invading pathogens and serve as an important link between innate and adaptive immunity [16]. TLRs recognize Pathogen- Associated Molecular Patterns (PAMPs) to initiate protective immune responses [17,18]. MyD88 and IRAK4 are critical signaling mediators of the TLR/IL1-R superfamily [19,20]. In humans, inherited MyD88 and IRAK4 deficiencies cause recurrent, often life-threatening infections by pyogenic bacteria [21,22].

In the present study, we demonstrated that frequent up-regulation of miR-200b in chronic HBV-infected liver tissues and HBV-producing cells attenuated TLR4-mediated antiviral responses of innate immunity by targeting its downstream signaling mediators MyD88 and IRAK4. In this way, HBV avoids recognition by the innate immune system and forms a persistent infection. This may explain previous observations on its apparent inability to be detected by PRRs.

Using qRT-PCR, we found a differential expression of miR-200b in different stages of HBV infection patients. Compared with healthy control, there was a significant change of the expression of miR-200b during the development from chronic HBV infection to HBV-induced cirrhosis. This change may result from the change of immune system function caused by HBV infection during the early stage of HBV-related hepatocarcinogenesis. Future studies will be needed to explain the mechanism of how the interactions between replicating HBV and the immune system resulted in the change of miRNAs expression profile.

To conclude, our study revealed upregulation of miR-200b in chronic HBV infection suppresses TLR4-mediated innate immunity by targeting MyD88 and IRAK4 and subsequently promotes HBV infection. We believe that these findings may contribute to the understanding of the pathogenesis of HBV infection and the HBV-related hepatocarcinogenesis.

We thank all the staff in the department of Infectious Diseases of Affiliated Hospital of Hebei University for their help on the manuscript.