Objective: To find the minimum effective concentration required by remifentanil to inhibit circulatory response due to pneumoperitoneum during laparoscopic surgery in elderly patients.

Methods: ASA grade I/II patients aged 65-80 years old who received elective laparoscopic colon surgery were selected. All patients received Target-Controlled Infusion (TCI) of propofol, with a target plasma concentration of 3.5 μg/ml. They were administrated with 0.9 mg/kg rocuronium after loss of consciousness, inserted with laryngeal mask 2 minutes later and given plasma TCI with remifentanil before the start of surgery to determine its concentration using the sequential method. If mean arterial pressure and/or heart rate of a previous patient increased by >20% within five minutes after pneumoperitoneum compared with before pneumoperitoneum, the current patient was administered with remifentanil at a higher concentration. If the values increased by <20% within five minutes, the current patient was a lower concentration of remifentanil. The target concentration ratio of adjacent effect-site compartments was 1.2. The TCI target plasma concentration (EC50) of remifentanil for inhibiting the hemodynamic fluctuations of 50% of elderly patients after pneumoperitoneum was calculated using the sequential method.

Results: With the sequential method, EC50 of remifentanil for suppressing the hemodynamic response to laparoscopic pneumoperitoneum was 2.67 ng/ml and the 95% confidence interval was 2.61-2.72 ng/ml.

Conclusion: In combination with propofol during TCI, remifentanil at the target plasma concentration of 2.67 ng/ml can inhibit 50% of elderly patients from circulatory fluctuations caused by laparoscopic pneumoperitoneum.

As one of minimally invasive surgeries, laparoscopic surgery has been widely used in clinical practice, and has become popular owing to small surgical trauma, fast recovery and short hospital stay [1,2]. One of its characteristics is to establish artificial pneumoperitoneum, which requires injection of carbon dioxide gas into the abdominal cavity. After the establishment of pneumoperitoneum, abdominal visceral vessels and inferior caval veins are under pressure, and the backflow of central venous blood increases, i.e. the preload increases, so that the tension of left ventricular wall and the myocardial oxygen consumption increase. Besides, absorption of carbon dioxide into the bloodstream may cause hypercapnia, which can directly inhibit cardiac muscles, dilate peripheral blood vessels, stimulate the central nervous system, and enhance the sympathetic activity and catecholamine release, thus indirectly exciting the cardiovascular system and elevating blood pressure and Heart Rate (HR). Moreover, during laparoscopic operation, it is necessary to change body position to meet the requirements for surgery. For example, the foothigh position is often employed in laparoscopic colon surgery, which can increase the returned blood volume and aggravate circulation disorders. In view of the significant influence of laparoscopic surgery on respiratory circulation, anesthesia should be cautiously managed.

In the past, adverse cardiovascular reactions and autonomic reflex caused by pneumoperitoneum and surgical stress in laparoscopic surgery have been resisted by raising the concentration of inhaled anesthetics, sometimes in combination with fentanyl and muscle relaxants. However, it generally takes over 10 minutes from the increase of concentration of inhaled anesthetics to the onset of clinical effect, which is difficult to cope with cardiovascular reactions occurring at any time during surgery. Increasing the amounts of fentanyl and muscle relaxants may cause accumulation, thereby delaying postoperative recovery and extubation. In recent years, intravenous Target-Controlled Infusion (TCI) has experienced continuous development, which, with the drug concentration in plasma or effect-site compartment as the goal, can quickly reach the depths of anesthesia, analgesia and sedation, so that the concentration of intravenous anesthetics can be adjusted as easily as the adjustment of inhalant vaporizer and the clinical effects can be achieved rapidly. As two novel short-acting intravenous anesthetic drugs, propofol and remifentanil are very suitable for application in TCI, and their combination can significantly enhance the controllability of intraoperative stress response. Remifentanil, as a new μ-receptor agonist containing ester bond, can be rapidly hydrolyzed into inactive metabolites by specific esterase in plasma and tissues, which is typified by short half-life of continuous infusion, no accumulation, metabolism unaffected by hepatic or renal function, strong analgesic effects as well as rapid onset and elimination. There are a number of studies on the optimum concentration of remifentanil for inhibiting stimulation from tracheal intubation and skin incision [3-5], but the effective concentration of remifentanil for suppressing the circulatory response caused by laparoscopic pneumoperitoneum has rarely been investigated. In this study, remifentanil was combined with propofol whose concentration was adjusted under BIS monitoring, which exerted satisfactory anesthetic effects on either intubation or intraoperative maintenance.

ASA grade I/II patients aged 65-80 years old who received elective laparoscopic colon surgery between May and August 2015 in our hospital were selected.

The Systolic Blood Pressure (SBP) was higher than 180 mmHg and/or the Diastolic Blood Pressure (DBP) was higher than 100 mmHg before administration; SBP was lower than 90 mmHg and/or DBP was lower than 60 mmHg before administration; obesity (BMI>30); ephedrine was used to elevate blood pressure during induction and before surgery.

All patients had no premedication. With ECG and BIS monitoring, the veins of upper extremity were opened, and infused with 5 ml/kg hydroxyethyl starch 130/0.4 at an infusion rate of 20 ml.kg-1.h-1 before induction. Intra-arterial pressure was continuously monitored on the ipsilateral upper extremity by radial arterial catheterization, and anesthesia induction was initiated at the same time of mask inhalation of oxygen.

All data were analysed using SPSS 13.0 software and expressed as mean ± standard deviation (x ± s). Intra-group comparisons were conducted with the paired t-test and variance analysis of randomized block design. The effective number (r) and ineffective number (s) of each remifentanil TPC for inhibition on stress response were collected to calculate the logarithm (x) and total number of cases (n), effective rate of stress response inhibition (p) and difference between two adjacent logarithmic concentrations (d). EC50 and 95% CI were calculated according to the following sequential method [5,6]. Logarithmic value of EC50: IgEC50=Σnx/Σn, and the antilogarithmic value was used to obtain EC50; standard error of EC50: SIgEC50=d√Σ (p (1-p)/n-1). Logarithmic value of 95% CI of overall EC50: (IgEC50-1.96 SIgEC50, lgEC50+1.96SIgEC50). Each anti-logarithmic value was taken to calculate EC50 and its 95% CI. P<0.05 was considered statistically significant. 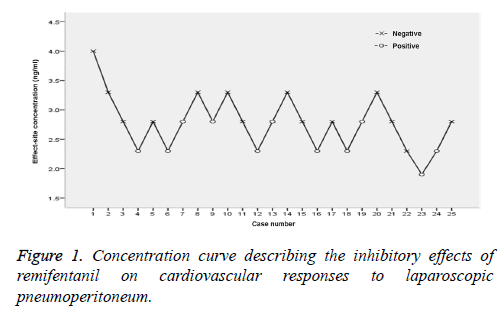 The BIS values at different time points after induction were significantly lower than that before induction (P<0.001), but the results were similar at these time points (Table 2).

BIS values of each patient before and after pneumoperitoneum 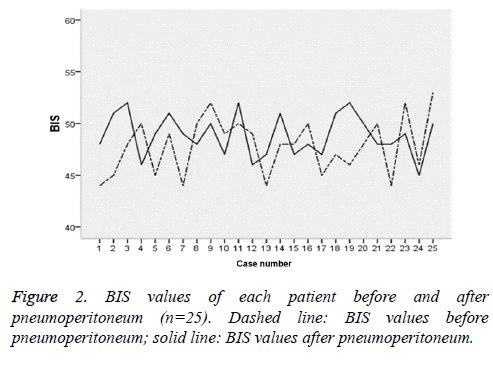 MAP and HR at each time point

Table 3. MAP and HR at each time point.

Calculation of EC50 by the sequential method

According to the methods described in the statistical analysis subsection, when BIS was maintained between 45 and 55 for TCI with remifentanil and propofol, EC50 of remifentanil for suppressing the hemodynamic response to laparoscopic pneumoperitoneum was 2.67 ng/ml, and 95% CI was 2.61-2.72 ng/ml (Table 5).

Table 5. Parameters for calculation of EC50 by the sequential method.

BIS is currently considered as an electroencephalogram parameter that can reflect the sleeping stages in the depth of anesthesia and provide continuous real-time monitoring, and compose the mixed information obtained from EEG power and frequency by dual frequency analysis into a parameter value. As BIS contains the EEG quantitative parameters of three kinds of characteristics, i.e. frequency, amplitude and phase, it can reflect all information of EEG signals. Thus, BIS can well reflect the depth of anesthesia, namely the degree of inhibition of anesthetics on the central nervous system and changes in consciousness. As BIS value is more widely applied in monitoring the depth of general anesthesia, its value and significance have received more recognition. Taking into account the pathophysiological characteristics of the elderly, as well as precise anesthesia of today's advocacy, it is particularly important for the application of BIS monitoring in general anesthesia for the elderly. BIS monitoring can reduce the amount of propofol in the induction process of general anesthesia, thereby reducing circulatory fluctuations [8]. The BIS value usually recommended for general anesthesia is 40-65, and 65-85 for sedation [9]. In this study, before administration with muscle relaxants, that is, when OAA/S scale score was<1, BIS was 65 or less, in line with the principle of induced administration, and meanwhile the BIS values during the insertion of laryngeal mask were all<60, showing that the patient was under an effective depth of anesthesia.

In this study, in continuous TCI with propofol, BIS values were decreased with the increase of propofol plasma concentration, and were consistent with the OAA/S scale scores, which was consistent with the results of previous studies [10,11]. It is considered that BIS, propofol blood concentration and OAA/S scale score are correlated, of which BIS has the highest correlation. The BIS values before and after pneumoperitoneum herein were further compared and the results showed no statistically significant differences. The adjustment of remifentanil concentration may not cause changes in BIS values [12]. Also, Albertin et al. [5] found that when patients suffered from noxious stimuli such as tracheal intubation and skin incision, the BIS values did not change significantly, which were consistent with the findings of this study. Hence, analgesia in the induction of general anesthesia cannot be reflected by BIS values. Under anesthesia, some patients do not experience hemodynamic fluctuations during surgery, relying on the effects of opioids, but may have intraoperative awareness due to lack of sedative drugs. In other words, in clinical practice, we cannot just rely on hemodynamic fluctuations to determine the depth of anesthesia, which further reflects the importance of BIS monitoring in general anesthesia.

In summary, this study confirmed that BIS values, remifentanil concentration and hemodynamic fluctuations had no significant correlations, as suggested by the changes of BIS values at each time point of anesthesia induction. When BIS was maintained between 45 and 55 for TCI with remifentanil and propofol, TPC of remifentanil in effect compartment for effective inhibition on circulatory fluctuations after laparoscopic pneumoperitoneum in 50% of elderly patients was determined to be 2.67 ng/ml using the sequential method. Furthermore, the remifentanil concentration for clinical application was recommended to be 4.01 ng/ml, i.e. 1.5 times of EC50, which can be used as a reference for its application in elderly patients for laparoscopic surgery. However, we did not detect the levels of catecholamines, as the limitation of this study. Further studies are on-going in our group.