Base on the current situation of the development of wireless medical, according to the multi-frequency and broadband MIMO road medical special wireless network system themselves security, stability and continuity of network transmission, wireless network impact on human health and the medical equipment is discussed. Aging is associated with a decrease in the physiologic reserve thus; many elderly persons are unable to compensate for the increased metabolic demands that accompany acute illness or injury. This inability to compensate leads to increased rates of postoperative complications and death. Aggressive, goal-directed management in the Geriatric intensive care unit is beneficial for the geriatric patient. In this paper MIMO WSN is used in patient monitoring scenario to collect the bio-physiological variables and to trigger emergency services. MASTS algorithm is implemented for channel selection and SCA algorithm is for energy maximization throughput. The performance measure like end to end delay, packet delivery ratio and throughput are analysed through simulation and graphs are shown.

Several network architectures and wireless technologies that can be used for the implementations of WSN in patient monitoring schemes. Now MIMOWSN deployed in patient monitoring scenario and the patient pathology it may be necessary to monitor different bio-physiological variables. The collected data can be used for remote diagnosis, consolatory patient monitoring and to trigger emergency services, the current progress in the field of wireless technology allows developing small size sensors called nodes, communicating with each other via a radio link and are characterized by their limited resources (power supply, processing, memory storage). Their flexibility of use makes them more utilized to form a Wireless Sensor Network (WSN) without returning to a fixed infrastructure. Furthermore, these nodes typically deployed in inaccessible areas to control a definite phenomenon, ensure the transfer of data collected using a multi-hop routing to a Base Station (BS), which is far from the monitored field. The BS is responsible for the analysis and processing of collected data to be exploited by the end user. Based on the above briefly description, for a WSN to accomplish its function without failure of the connection between the nodes, because of a depleting battery of one or more nodes, we need a data routing protocol which gives higher priority to the energy factor compared to other limitations, in order to provide stability of the network. At this point, many studies have been made; the most known ones are based on the MIMO technologies. However, the node cannot carry multiple antennas at the same time due to its limited physical size. Therefore, a new transmission technique called Cooperative MIMO" has been proposed. This technique is based on the cooperation principle where the existence of different nodes in the network is exploited to transmit the information from the source to a specific destination by virtually using the MIMO system. The Cooperative MIMO allows obtaining the space-time diversity gain, the reduction of energy consumption, and the enhancement of the system capacity.

MIMO is used in conjunction with spatial multiplexing as a way to increase the peak data rate. This method uses additional transmit and receive antennas to transmit parallel data streams. As a result, the channel capacity is increased without increasing the bandwidth or the SNR. With an Msx MrMIMO constellation-where Msis the number of transmit antennas and Mris the number of receive antennas-the maximum number of spatially separate data streams is defined as M=min (Ms, Mr). A MIMO system consists of several antenna elements, plus adaptive signal processing, at both transmitter and receiver.

Remote sensing of heart and respiration activity by measuring Doppler shift in radio signals is detected using MIMO techniques. Based on BLAST to isolate useful scattered radio signals from those due to unwanted motion in the environment. If there is interfering motion in the radar field of view, multiple antennas can be used to detect multiple copies of the same signal with different phase information, with coherent combining used to provide a greatly improved estimate of desired Doppler motion. MIMO system indicates that it is possible to separate multiple subjects even with identical breathing and heart rates. To numerically assess the performance of the MIMO radar sensing system, model designed as a human body as a cluster of isotropic scatters. The scatterers are randomly distributed around the cluster center, within a circle of diameter D. The cluster contains Ns scatterers. Simulations were done for a MIMO system with 4 transmit and 4 receive antennas, with the carrier frequency of 2.4 GHz, and 2 λ and λ/2 separation between transmit and receive antenna elements [1].

In vivo channel, achieving high bit rate approximately 100 Mbps performance will be facilitated by the use of MIMO Communication. In vivo Capacity, The OFDM system can be modelled as Yk=HkXk+WkK=1, 2.......N data [2].

The current trend in mhealth is to use wireless transceivers to interconnect the sensors that monitor the bio-physiological variables, thus forming a WSN. The device may also be required to process and store the collected data and will be referred to as the patient information sink (may be AP, Cloud and Gateway). The MIMO wireless communication between the patients’ sensors and the information sink is not restricted to be performed in a single wireless hop. In fact depending on the wireless transceivers range, the use of more than one wireless hop may be required to reach the information sink, it must be sent to the consultant physician may be located in the same campus as the patient or remote location or both.

Methodology: We consider the general MIMO channel as

Where n is assume as i.i.d zero mean circularly symmetric complex Gaussian with zero mean and unit variance. The capacity maximization of channel can be formulated as

where Ps>0 is the average transmit power.

We can rewrite Equation 2 as

However the equation is still non-convex. This kind of nonconvexity can be dealt with Successive Convex Approximation Algorithm (SCA).

6: until the termination criteria is satisfied.

The MIMO channels with discrete time model may be denoted as

We may write the above equation as B=HX+n, where H is an independent zero mean random matrix and n denotes random noise. We may use a graph of vertices and edges to represent the MIMO environment. To deploy the graph theoretical approach on maximum spanning tree in to MIMO channel selection and program the algorithm.

1) Step 1: Select 3 edges with the largest weight at first (including their vertices).

2) Step 2: Enlarge the sub graph by edges with large weight in decreasing manner and make sure no cycles are formed.

3) Step 3: Continue Step 2 until the edge number of enlarged sub graph is equal to Xt+Xr-1. This final sub graph is the spanning tree with the maximum sum of weight. As virtual MIMO graph contains the same information as that of channel gain matrix H, we illustrate MASTS algorithm by matrix entry selection procedure and matrix Hb, Hc, Hd, He.

In this network system 12 nodes are fixed (Figure 1). These nodes are communicated using 8 antennas. Node 4 is act as a cloud storage Nodes 3, 5 and 9 are act as channel one, two and three respectively. Simultaneously two nodes communicate two different data streams with same frequency. For making a network Initialization takes few seconds to fix the node. It is done by using the AODV protocol. 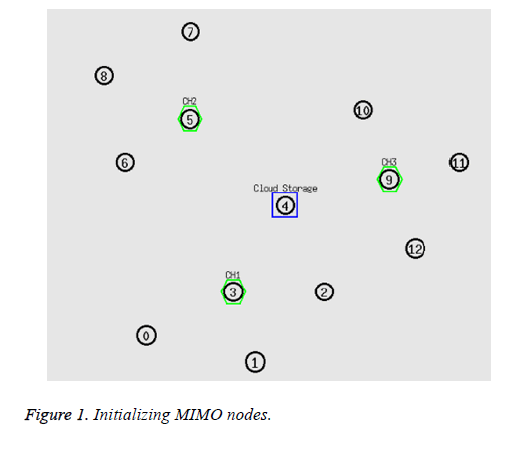 The number of packets increases in the transmission the latency is decreases and finally the latency is zero. When the packet transmission is from 50 to 100 it maintains the linear property. After that the packets increases the delay reduces consistently. Collision occurs during the transmission between the nodes using MIMO channel, the channels communicate through iteration process and switch over among them. Now, consider an small data transmission from same channel of nodes A and B, communicates with maximum delay, nodes always waits for an acknowledgement with minimum duration and once fails to acknowledge, then it automatically configured to other channel through iteration process. The large data transmission spitted among the two antennas on the node and communicates concurrently. This is illustrated in Figure 2. 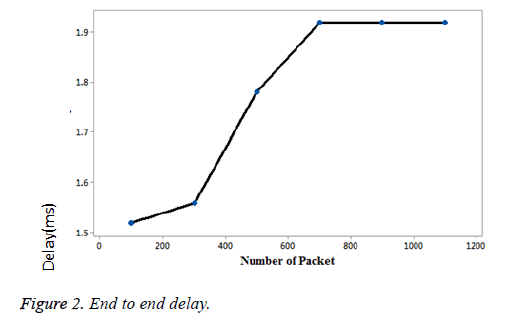 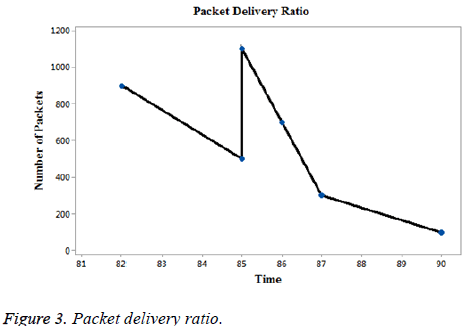 The number of packets versus energy maintains ramp signal relationship between them continuously. Finally it maintains the latency is zero. The network energy is sustaining up to the lifetime of service. The residual energy remains available in a network even though the 1000 number of packets transmitted. Initially the capacity of the network is high, it starts reduces after delivery the 900 packets. This is illustrated in Figure 4. 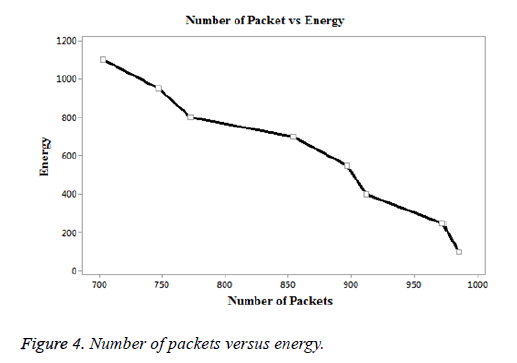 Figure 4: Number of packets versus energy.

Finally the throughput of the network is increases rapidly when the time increases. The transmission data rate is increases with time gradually. This is shown in Figure 5. 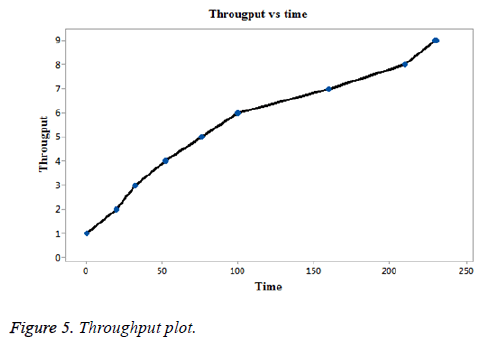 The scheme to address channel selection and energy utility issues associated with MIMO systems. It highlights the merits related with the convexity specifications for the approximate function in WSN for maximization of the energy in the node. The experimental setup with the SCA algorithms improves the battery level of the node and collision of nodes and delays in the transmission is reduced. The Maximum Spanning Tree Searching (MASTS) algorithm to select a set of sub channels that always provide a path connecting all sensors.

I thank A. Vignesh R&D manager, Chase Technologies., for his suggestions and support.