Miller-Fisher Syndrome (MFS) is considered to be a variant of Guillain-Barree Syndrome (GBS). MFS was first described by Miller-Fisher in 1956 [1]. The typical clinical features of MFS are external ophthalmoplegia, ataxia and areflexia. Antecedent infection is common in MFS patients. Immune response triggered by antecedent infection has been believed to be involved in the pathogenesis of MFS since the discovery of immunoglobulin G (IgG) anti-GQ1b antibodies in 1992 [2]. Anti-GQ1b antibody is an important biomarker for the diagnosis of MFS. A comparative study revealed that anti- GQ1b antibodies were present in 83% of MFS patients [3].

MFS has ‘less-extensive forms’ and ‘massive-extensive forms’. The former could have some incomplete clinical features of classic MFS such as ‘acute ophthalmoparesis’, ‘acute ataxic neuropathy’, ‘acute ptosis’ and ‘acute mydriasis’; while the latter could have additional features such as hypersomnolence (Bickerstaff Brainstem Encephalitis, BBE), Pharyngeal-Cervical-Brachial (PCB) weakness, and limb weakness (an overlap of GBS) [4]. The less and massive forms of MFS with positive anti-GQ1b antibodies have been reported and support that a continuous spectrum exists among these clinical conditions which were referred to ‘anti-GQ1b antibody syndrome’ [5]. Here we report a case of MFS associated with cognitive impairment, which may be a new form of MFS and anti-GQ1b antibody syndrome.

A 30-year-old man who was healthy before complained of unstable walking, double vision and numbness of his hands and feet for one day. He felt a little dyspnea, had progressive dizziness and decline of memory, but had no change in consciousness. Before these symptoms occurred, he had a fever, cough and expectoration for one week, but no diarrhea. When he was hospitalized, his body temperature, blood pressure and pulse were normal. The physical examination revealed dysarthria, abnormal eye movements, hyperalgesia of the right foot, areflexia of tendon reflexes, ataxia, and cognitive impairment including decline of memory, calculation, attention, and visuospatial function. The score of Mini-Mental Status Examination (MMSE) was 25. 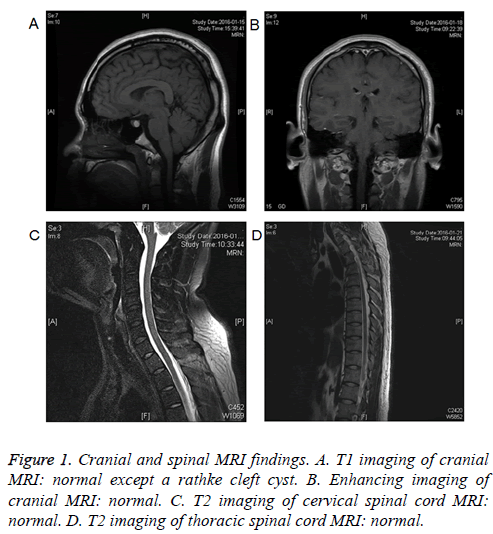 On admission, we suspected him as Acute Disseminated Encephalomyelitis (ADEM) because of the obvious cognitive impairment. Methyl prednisolone (500 mg) was given daily. On the second day, MRI and CSF examinations showed no abnormality. However, his symptoms were worse. He presented urinary retention, dyspnea and dysphagia, and underwent urinary catheterization. We considered that he had MFS and he received intravenous immunoglobulins (IVIg) for 5 d. The patient improved gradually. On the 7th d, we pulled out the urinary catheterization and he could urinate normally. On the 10th d, all symptoms disappeared. The physical examination was normal. MMSE and Montreal Cognitive Assessment (MoCA) score were both 30 at discharge. BGA was normal without oxygen inhalation. He had no recurrence during 8 months’ follow-up.

MFS is a relatively rare clinical condition. There is still controversy on the etiology of MFS. Although most of patients with MFS have normal brain imaging, brain MRI and EEG were abnormal in 1% and 25% MFS patients, respectively [3]. Recently Mao et al. found that MFS could overlap with Acquired Demyelination Syndrome (ADS) in CNS, and MFS/ADS overlap syndromes were more common than other types of GBS [7].

Immunohistochemistry analysis showed that anti-GQ1b antibody reacted with the cytoplasm of neurons throughout the cerebrum, including the cortex and thalamus [8]. PET study showed increased glucose metabolism in the hemispheres of MFS patients [9]. In addition, lesions in bilateral cerebral white matter were found by brain MRI in one MFS/ADS patient [7]. Therefore, the involvement of the supratentorial brain regions in MFS patient is possible.

Autopsy findings in one BBE patient with normal brain imaging showed the presence of definite inflammatory changes in the brainstem [10]. In addition, Blood Brain Barrier (BBB) is relatively permeable, and large molecules such as anti-GQ1b antibodies might penetrate to CNS and cause inflammatory changes [5]. These findings indicate that MFS involves CNS and support the central cause of MFS. Inflammatory changes in the cortex or subcortex might cause cognitive impairment in our patient. Methyl prednisolone showed no efficacy in our patient, but IVIg stopped the deterioration and led to complete recovery. This is in accordance with previous reports that the majority of patients with MFS had good outcomes [5].