#These authors contributed equally to the manuscript

Miller Fisher syndrome (MFS) is a variant of Guillain-Barre syndrome (GBS) characterized by acute onset of ophthalmoplegia, ataxia and areflexia. Diplopia, altered ocular motility, pupillary dysfunction and blepharoptosis have been reported in MFS patients. However, the relationship between antiphospholipid antibody and MFS remains largely unclear. Here we report the first Chinese patient with MFS who showed proptosis and pain and had serum anti-GQ1b antibodies and IgM anticardiolipin antibody. A 64-year-old woman presented with numbness of distal limbs, proptosis and pain after upper respiratory tract infection. Her bilateral eye pain got exacerbated, along with blepharoptosis, ophthalmoplegia and horizontal binocular diplopia. Ophthalmological exam revealed normal pressure in both eyes. The neurological examination revealed bilateral ptosis, proptosis with serious tenderness, ophthalmoplegia with dull pupil reaction to light, and areflexia. There was no ataxia. Serum anti-GQ1b antibodies and IgM anti-cardiolipin antibody were positive. Our case suggests that MFS presenting with proptosis and pain may be associated with serum anti-GQ1b antibodies and IgM anti-cardiolipin antibody.

Miller Fisher syndrome (MFS) is a variant of Guillain-Barre syndrome (GBS) characterized by acute onset of ophthalmoplegia, ataxia and areflexia, and positive serum anti- GQ1b antibodies. MFS is difficult to be diagnosed due to varied clinical manifestations [1]. Diplopia, altered ocular motility, pupillary dysfunction, blepharoptosis have been reported in MFS patients. However, seldom case report has been reported for MFS patients presenting with proptosis and pain. Previous observations provide strong but still inconclusive evidence that autoantibodies play an important pathogenic role in GBS. Anti-ganglioside antibodies including GM1a, GM1b, GD1a, GalNAc-GD1a, GD1b, GD3, GT1a and GQ1b antibodies have been studied intensively, and anti-GQ1b antibody is considered as a specific antibody for MFS [2].

A 64-year-old Chinese woman, without any significant medical history, presented with four-day numbness of distal limbs, three-day proptosis and pain after upper respiratory tract infection. She was afebrile and recovered from a mild cough without any drug therapy. Her numbness of limbs got better but bilateral pain got exacerbated when she lay down, accompanied by proptosis, blepharoptosis, ophthalmoplegia, horizontal binocular diplopia. Ophthalmological exam revealed normal pressure in both eyes. The general physical examination showed pharyngeal hyperemia and tonsils II° swelling, while neurological examination revealed bilateral ptosis, proptosis with serious tenderness, and ophthalmoplegia with dull pupil reaction to light. Examination of the rest of cranial nerves was negative and symmetrical. Muscle strength and sensation of four limbs were normal. There was no ataxia. Tendon hyporeflexia in both the upper and lower extremities were observed, and the bilateral Babinski sign was negative. 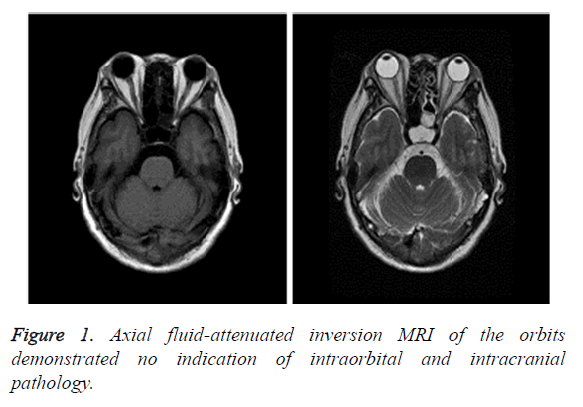 Figure 1. Axial fluid-attenuated inversion MRI of the orbits demonstrated no indication of intraorbital and intracranial pathology.

Most MFS patients have a preceding infection history, and the typical symptoms include ophthalmoplegia, ataxia and areflexia, while some patients may have paresthesia, weakness and multiple cranial nerve lesions [7]. A review of 223 cases of MFS showed that the incidence of diplopia was 38.6%, the incidence of ataxia was 20.6% and the incidence of areflexia was 81.6%, and cranial nerves involvement was present in 56.9% of MFS patients [8]. In this patient, the diagnosis of MFS was supported by paresthesia in limbs endings as the first symptom, ophthalmoplegia and areflexia, CSF albuminocytological dissociation and positive serum anti- GQ1b antibodies. Different from typical MFS patients, this patient presented with pain and proptosis which to our knowledge rarely have been reported in the literature. Waung et al. report a case of MFS similar to ours, and suggested that idiopathic thin extraocular muscles may lead to the development of proptosis when ophthalmoplegia and oculomotor nerve dysfunction make globe position laxity [9].

To the best of our knowledge, autoimmune-mediated demyelinating is primary pathogenesis of MFS. It has been reported that 90% of patients with MFS have IgG antibodies against GQ1b and anti-GQ1b antibody is considered to be a specific marker of MFS, but some patients are negative for this antibody [10,11]. It is postulated that anti-GQ1b antibodies generate after the infection of the pathogens and they attack ganglioside GQ1b to cause clinical symptoms [12,13].

It is not well understood whether anti-cardiolipin antibodies play a role in the pathogenesis of the polyneuropathy or represent a part of an extensive immunoreaction that occurs in MFS. The immune attack is directed against the components of Schwann cell membrane and is accompanied by the characteristic feature of vesicular demyelination [16]. Anti-cardiolipin and anti-phosphatidylinositol antibodies could be useful markers for the response of MFS patients to treatment. Unfortunately, re-examination of autoimmune function was declined by the patient.