Objective: Due to the side effects of caesarean operation as well as the vital cares needed in this procedure, the raise in the ratio has expressed the technique as a matter of global concern.

Methods: A total of 93 patients’ undergone caesarean sections under spinal anaesthesia with American Society of Anaesthesiologists Class 1 and 2 were included in the study. The patients were randomly divided into three groups of 31 persons. All 3 groups received 10 mg of 0.5% bupivacaine then 25 mg of meperidine was added for the second group and 2 mg of midazolam was used for the third group while the first group received placebo in addition to bupivacaine. RM-ANOVA, chi square, and ANOVA using Bonferroni correction method we used to compare the data. All analysis was done using SPSS 20. Pvalue less than 0.05 considered as the significant level.

Conclusion: This investigation demonstrates that meperidine for its longer duration of analgesia is better than midazolam while with regard to having fewer side effects, the reverse is preferable. So, injecting sufficient dosage of midazolam along with bupivacaine could be a good choice for additive drug.

One of the most common surgical procedures in the world is caesarean delivery and its rate has dramatically increased in recent years. The rate of caesarean section has risen from less than 7% in 1970s to more than 25% in 2003 [1]. Due to the side effects of caesarean operation as well as the vital cares needed in this procedure, the raise in the ratio has expressed the technique as a matter of global concern [2].

The most frequent complaint by those who have undergone this operation is pain. Post-caesarean pain is a common cause of acute pain in the obstetrics [3], which can lead to many postoperative complications; for example, an unpleasant feeling increasing during hospitalization, the time needed to get out of bed, immobility and the reduced patient’s desire to move and rise up. In addition, the complications caused by immobility such as atelectasia, deep vein thrombosis, and constipation are mentionable [4]. Therefore, pain management is an important component of postoperative care in which the anaesthesiologist has a considerable role to choose an appropriate technique [5].

In the past two decades, regional anaesthesia has become a preferred method instead of general anaesthesia [6]. The simplicity of this technique along with its reliability, minimal foetal exposure to drugs, patients’ awareness and minimization of the hazards of aspiration are the advantages of spinal anaesthesia rather than general anaesthesia [7]. Bupivacaine is the most common drug used in the spinal anaesthesia but its high dosage is associated with the increased incidence of hypotension [8]. Intraoperative hypotension can cause many detrimental effects on both mother and neonate including nausea, vomiting, dizziness, decreased uteroplacental blood flow and foetal acidosis [9]. All these issues have led to great number of research studies tested many different ways to reduce the incidence of hemodynamic instability through decreasing the intrathecal bupivacaine dosage by adding other drugs to it [10]. Meperidine (pethidine) is one of the preferred agents as it has a good post-operative analgesic effect. Its low cost and duration of action have also been influential in choosing the drug as a considerable local anaesthesia [11]. By blocking nociceptive afferents, wound infiltration with appropriate drugs could prevent central sensitization, and could be effective in chronic postoperative pain prevention [12]. It has been found that intrathecal midazolam reduces excitatory GABA-mediated neurotransmission in interneurons, leading to a decrease in the excitability of spinal dorsal horn neurons [13]. Also, adding midazolam to bupivacaine will significantly improve the duration and quality of spinal anaesthesia [14]. Thus, considering the patients who have undergone caesarean section, this study investigated the comparison of analgesic effect and hemodynamic changes after adding intrathecal midazolam vs. pethidine in spinal anaesthesia using bupivacaine. This attempt of study will also disclose how to decrease complications of bupivacaine through reducing its dosage and adding an acceptable drug.

The study was conducted at the Department of Anaesthesiology, Fasa University of Medical sciences, Iran. After the approval of the institutional ethics committee, a total of 93 patient’s undergone caesarean sections were included in the study. Besides, informed consent was obtained from the patients. The Patients undergone caesarean sections under spinal anaesthesia with American Society of Anaesthesiologists Class 1 and 2 were in the age group of 18-35. The Patients with pre-eclampsia/eclampsia, intraoperative complications, previous caesarean delivery, and conditions that may have altered patients’ pain perceptions, such as diabetes mellitus, neurological diseases, systemic vascular disease and mental disability were excluded from the study. The patients were randomly divided into three groups of 31 persons. Moreover, Spinal anaesthesia was induced using a 27 gauge needle in the L2-L3 or the L3-L4 intervertebral space. The standard IV fluid protocol was 15 ml/kg of ringer lactate solution done before the induction of spinal anaesthesia. The first group (placcebo) received only 10 mg of 0.5% bupivacaine. Group 2 received 10 mg of 0.5% bupivacaine+25 mg of meperidine, and the third group received 10 mg of 0.5% bupivacaine+2 mg of midazolam. Furthermore, the patients' mean arterial blood pressures (1/3 (Systolic+2 Diastolic)) and heart rates were measured at different times (before the operation, immediately after the operation, 15 min, 30 min, 45 min, 60 min, 75 min, 90 min, after spinal anaesthesia, immediately and 30 minutes after the end of spinal anaesthesia). Also, evaluation of nausea in the patients was done immediately, 30 min, 1 h, 2 h and 4 h after spinal anaesthesia. Finally, it is essential to be noted that patients' pain assessment was documented by the expert nursing staffs using VAS (pain score 0-10, 0=no pain, 1-2=mild pain,3-7=moderate pain, >7 severe pain and 10=worse pain) imaginable in the intervals of 0, 30 min, 60 min, 90 min, 120 min, 150 min, 3 h, 3.5 h, and 4 h after the end of the spinal anaesthesia.

Change in the blood pressure and severity of pain overtime were compared between the study groups with Repeated Measurement Analysis of Variance (RM-ANOVA). Nausea was compared with chi square test and pain between groups was determined by one way ANOVA using Bonferroni correction method. All analysis was done in SPSS 20 (SPSS Inc. Chicago ILL) and charts were drawn in MS Excel (Microsoft Co). P-value less than 0.05 considered as the significant level.

In this study, 93 women in three groups were participate (Table 1). Mean arterial blood pressure significantly decreased in the meperidine group 30 and 60 minutes after the beginning of operation respectively Figure 1. Blood pressure remained reduced at the end of surgery and 30 min after surgery. Blood pressure trend in the Midazolam group during surgery was similar to the placebo group. Frequency of nausea had not significant difference between the study groups in each time (Table 2). For 10 (23.3%) subjects in the Midazolam group, 19 (61.3%) subjects in the meperidine group and 24 (77.4%) subjects in the placebo group were used anti-nausea medication. It indicates that the Midazolam group, used antinausea medication less than other groups (P=0.001).

Table 1. Age and the duration of anaesthesia in the study groups. 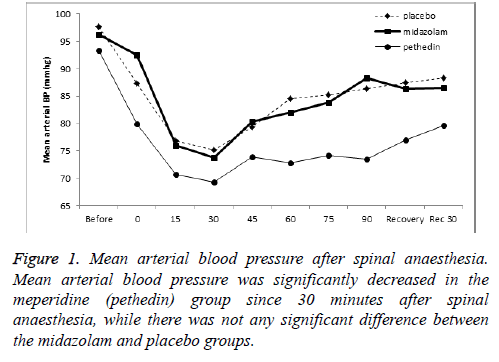 Table 2. Comparison of nausea after spinal anaesthesia between the study groups.

Table 3. Comparison of having pain after spinal anaesthesia between the study groups.

Table 4. Comparison of having pain after spinal anaesthesia between the study groups. 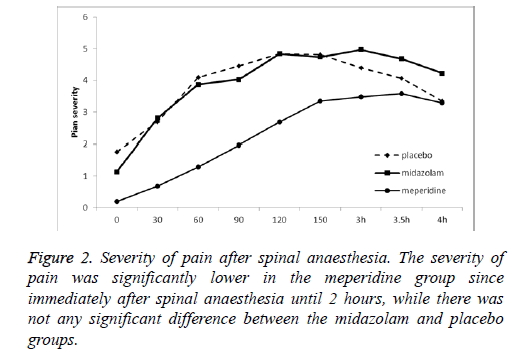 In the present study, analgesia duration and adverse effects of meperidine and midazolam were compared with placebo. The results reveal that the duration of analgesia in the meperidine group is more than two other groups and the placebo group has the shortest analgesia duration. In addition, the rate of nausea and hemodynamic changes (hypotension) in the meperidine receivers are more than two other groups. Although hemodynamic changes are not different between the midazolam and placebo group, the rate of nausea in the midazolam group is less than the placebo one. Besides, the heart rate and Apgar score are similar among all three study groups.

To the author’s knowledge, the analgesic effect of intrathecal injection of meperidine and midazolam has not been compared with each other previously but has been investigated alone. Ye et al. studied the duration of analgesic and adverse effects of meperidine by adding it to intrathecal bupivacaine. Their findings disclosed an increase in the duration of analgesia in the meperidine group compared to the placebo one. In that study the incidence of nausea and vomiting was investigated that was higher in the meperidine group than the placebo group [8]. In our study, the findings coincide with theirs. Additionally, data from different studies show the same results [15] as meperidine is opium and the outcomes are related to its mechanism of action. In a study by Atalay sequential administration of 5 mg plain bupivacaine and 25 mg meperidine intrathecally provided better blood pressure stability and a lower incidence of side-effects than bupivacaine alone, without affecting quality of anaesthesia or surgical and patient satisfaction [16].

According to recent studies, moreover, an endogenous opioid, acting at spinal delta-receptors, is released due to intrathecal midazolam. The delta selective opioid antagonist, naltrindole is the cause of the suppression of its nociceptive effect [17]. Besides, as it is demonstrated by Bharti et al. the addition of 1 mg of midazolam to intrathecal bupivacaine improves analgesia duration compared to injecting bupivacaine alone [14]. Other studies done by Chattopadhyay et al. and Shadangi et al. also, show that adding intrathecal midazolam to bupivacaine increases analgesia duration [18,19]. But in this study, it is divulged that there is not much difference in pain relief between the midazolam group and the placebo group. So, the dissimilarities in pain threshold and dose of drug can be the causes of this difference. Furthermore, as Nishiyam et al. declare, optimal dose of epidural midazolam for postoperative pain relief is 0.05 mg/kg [20].

This investigation demonstrates that meperidine for its longer duration of analgesia is better than midazolam while with regard to having fewer side effects, the reverse is preferable. So, injecting sufficient dosage of midazolam along with bupivacaine could be a good choice for additive drug. In this study; besides, the safety of intathecal administration of midazolam and meperidine for new-borns is proved as the similarity in the new-borns' Apgar scores among all three groups signifies it. Finally, it must be mentioned that our study has some limitations; for instance, it could not test different doses of intrathecal midazolam and it did not include the number of gravidity and parity of patients. Thus, further studies considering these points are needed to determine the effects of the intrathecal midazolam and meperidine on the women undergoing caesarean section.