Breast cancer is the most common type of cancer and the most frequent cause of cancer deaths among women worldwide. Approximately 1.7 million diagnoses and about 521,900 deaths, which accounted for 25% of cancer cases and 15% of cancer-related deaths, were reported in 2012 [1]. The incidence of breast cancer is predicted to increase with demographic trend towards an older population, environmental changes and improved diagnostic techniques [2]. Current primary treatments for breast cancer include surgery, hormonal therapy, cytotoxic chemotherapy, immunotherapy and targeted therapy [3]. Despite the great progress in the early diagnosis and systemic therapy of patients with breast cancer, recurrence and distant metastasis remain as major barriers in the successful treatment of breast cancer [4,5]. Therefore, a comprehensive understanding of the molecular pathogenesis of breast cancer is important to develop effective therapeutic measures that are target specific and personalized improve patient survival and prevent metastasis and recurrence.

MicroRNAs (miRNAs) are small, single-stranded, non-coding RNAs that regulate gene expression by interacting preferentially with the 3’ untranslated regions (3’-UTRs) of target mRNAs, which might result in either inhibition of the target protein translation or degradation of the target mRNA [6,7]. MiRNAs and their target mRNAs form complex regulatory networks that are involved in cell proliferation, apoptosis, differentiation stress responses and other biological processes [8,9]. The aberrant expression of miRNAs also contributes to a range of human pathologies, including cancer [10]. Recent studies have found that miRNAs are deregulated in various types of human cancer [11-13]. Depending on the characteristic of their target mRNAs, miRNAs may serve as either oncogenes or tumour suppressors and thus play important roles in tumourigenesis and tumour development [14]. Therefore, miRNAs are potential biomarkers for the diagnosis, treatment and prognosis of human malignancies [15-17].

Forty-six paired breast cancer tissues and their adjacent normal tissues were collected from patients who treated with surgery at Shanxian County Central Hospital of Heze City. None patients underwent chemotherapy or radiotherapy prior to surgery. All tissue specimens were immediately frozen in the liquid nitrogen and stored at -80°C refrigerator until further use. This study was approved by Ethical Committee of Shanxian County Central Hospital of Heze City, and written informed consent was provided by each patient.

Cell proliferation was assessed using the CCK8 (Dojindo, Kumamoto, Japan) assay. After transfection 24 h, cells were seeded into 96-well plates at a density of 3000 cells/well. At various time points following incubation at 37°C, CCK8 assay was performed by adding 10 μl CCK8 reagent into each well. After incubation at 37°C in a 5% CO2 humidified incubator for additional 2 h, cell proliferation was determined by detecting the absorbance at a wavelength of 450 nm using a microplate reader (Bio-Rad Laboratories, Inc., Hercules, CA, USA). All experiments were performed in triplicate and repeated at least three times.

Identification of the targets of miR-331-3p 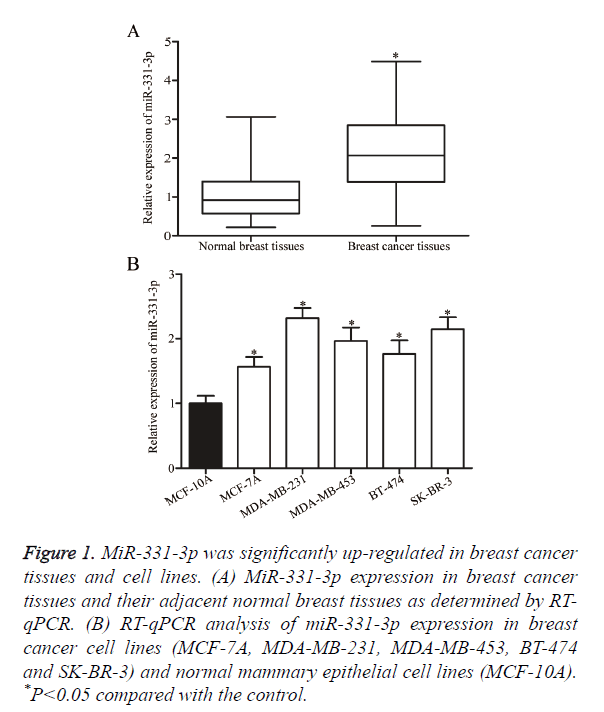 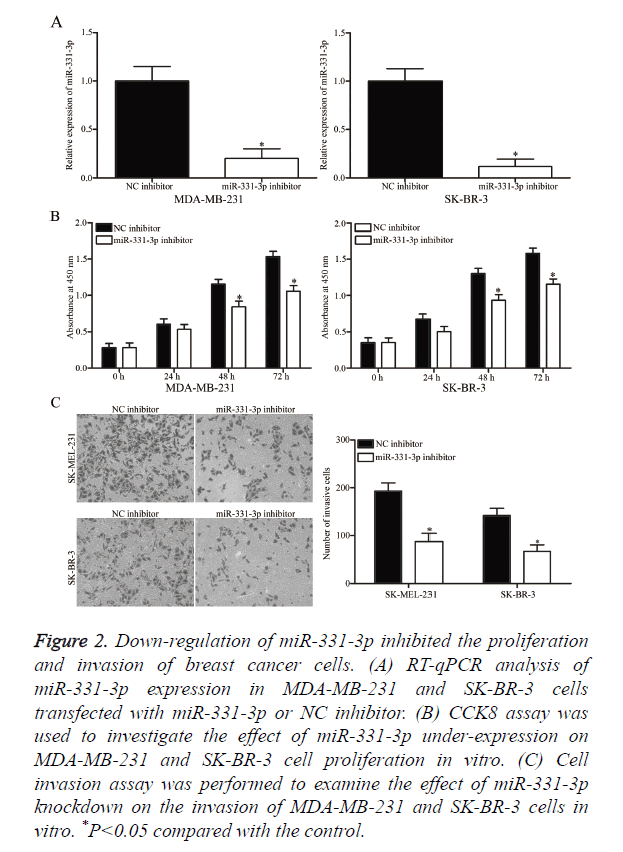 The underlying molecular mechanism of the tumourigenic property of miR-331-3p in breast cancer was explored by predicting the potential target genes through bioinformatics analysis. Among the putative targets, SRCIN1 was selected for further confirmation (Figure 3A) because this gene is lowly expressed in breast cancer and contributes to the formation and progression of breast cancer [21]. Two high-scoring binding sites of miR-331-3p were found on the 3’-UTR of SRCIN1 mRNA. Luciferase reporter assay was conducted in HEK293T cells co-transfected with both miR-331-3p or NC inhibitor and pGL3-SRCIN1-3ʹUTR Wt (1 and 2) or pGL3-SRCIN1-3ʹUTR Mut (1 and 2) to confirm whether SRCIN1 is a direct target of miR-331-3p. Under-expressing miR-331-3p significantly improved the luciferase activity of pGL3-SRCIN1-3ʹUTR Wt (1 and 2; Figure 3B, P<0.05) but exerted no effect on the activity of pGL3-SRCIN1-3ʹUTR Mut (1 and 2). SRCIN1 expression in MDA-MB-231 and SK-BR-3 cells transfected with miR-331-3p or NC inhibitor was measured through RTqPCR and Western blot analyses to determine whether this expression is regulated by miR-331-3p. As shown in Figures 3C and 3D, miR-331-3p inhibitor treatment significantly enhanced the mRNA (P<0.05) and protein (P<0.05) expression levels of SRCIN1 in MDA-MB-231 and SK-BR-3 cells compared with those in the cells transfected with NC inhibitor. These results suggest that SRCIN1 is a direct target of miR-331-3p in breast cancer. 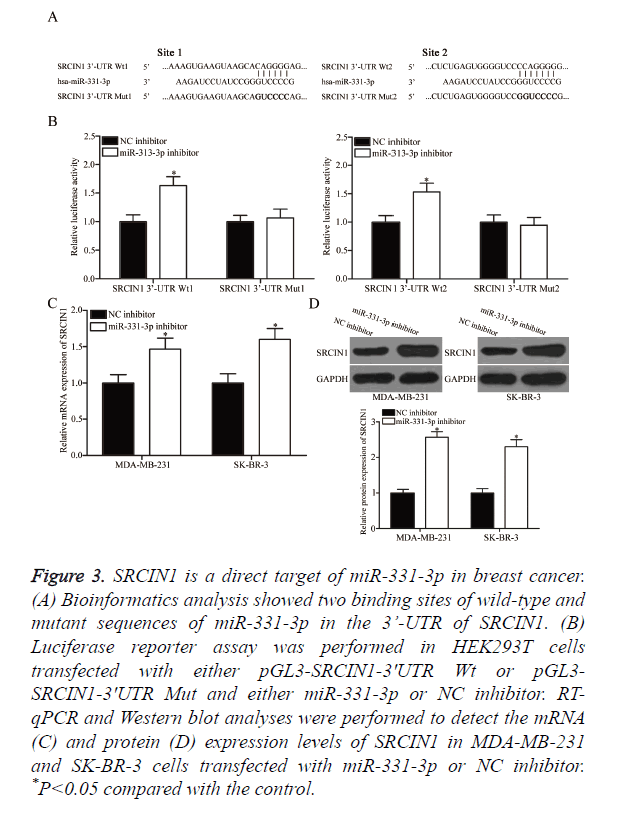 Figure 3. SRCIN1 is a direct target of miR-331-3p in breast cancer. (A) Bioinformatics analysis showed two binding sites of wild-type and mutant sequences of miR-331-3p in the 3’-UTR of SRCIN1. (B) Luciferase reporter assay was performed in HEK293T cells transfected with either pGL3-SRCIN1-3ʹUTR Wt or pGL3- SRCIN1-3ʹUTR Mut and either miR-331-3p or NC inhibitor. RT-qPCR and Western blot analyses were performed to detect the mRNA (C) and protein (D) expression levels of SRCIN1 in MDA-MB-231 and SK-BR-3 cells transfected with miR-331-3p or NC inhibitor. *P<0.05 compared with the control.

pcDNA3.1-SRCIN1 blank pcDNA3.1 plasmids were transfected into MDA-MB-231 and SK-BR-3 cells to verify whether SRCIN1 is an important mediator of the effects of miR-331-3p in breast cancer cells. As shown in Figure 4A, SRCIN1 was significantly up-regulated in MDA-MB-231 and SK-BR-3 cells after transfection with pcDNA3.1-SRCIN1 plasmid (P<0.05). CCK8 and cell invasion assays revealed that up-regulation of SRCIN1 inhibited the proliferation (Figure 4B, P<0.05) and invasion (Figure 4C, P<0.05) of MDA-MB-231 and SK-BR-3 cells compared with the cells transfected with blank pcDNA3.1 plasmid. These results suggest that the roles of SRCIN1 are similar to those induced by miR-331-3p knockdown in breast cancer cells, thus indicating that SRCIN1 is a functional downstream target of miR-331-3p in vitro. 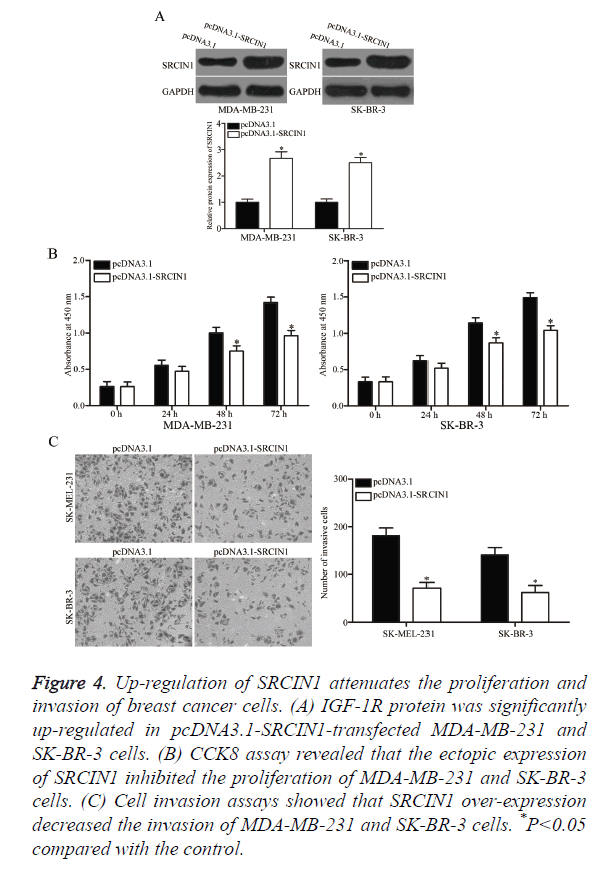 MiR-331-3p deregulation contributes to the malignant phenotype of several types of human cancer. For instance, Chang et al. reported that miR-331-3p acts as an oncogene in hepatocellular carcinoma by promoting cell growth and metastasis both in vitro and in vivo [22]. However, in gastric cancer, the ectopic expression of miR-331-3p blocks G1/S transition and inhibits colony formation and growth [25]. Zhao et al. [19] reported that the resumed expression of miR-331-3p attenuates cell proliferation, promotes apoptosis and activates caspase-3 in colorectal cancer. Epis et al. [24] revealed that up-regulation of miR-331-3p blocks the androgen receptor signalling pathway in prostate cancer cells, reduces the activity of an androgen-stimulated, prostate-specific antigen promoter and blocks the expression of a prostate-specific antigen. Epis et al. [20] also revealed that restoration of miR-331-3p expression represses the cell proliferation and clonogenic growth in glioblastoma. Fujii et al. [26] indicated that miR-331-3p re-expression suppresses cervical cancer cell proliferation and induces G2/M phase arrest and apoptosis. These conflicting findings revealed that the biological roles of miR-331-3p are tissue specific and can be explained by the ‘imperfect complementarity’ of the interactions between miR-331-3p and its direct target genes. These findings also suggest that miR-331-3p should be investigated as a potential therapeutic target for the treatment of specific cancers.

SRCIN1, which is also known as p140 cas-associated protein [29], contains two coiled-coil domains, two proline-rich regions and two regions of highly charged amino acids. According to the characteristic domain structure, SRCIN1 acts as an adaptor protein [30]. SRCIN1 expression is down-regulated in several types of human cancer, such as liver cancer [31], breast cancer [21] and osteosarcoma [32]. Functional experiments revealed that SRCIN1 modulates multiple biological processes, such as cell proliferation, apoptosis, migration, metastasis and invasion [33-35]. In the present study, the expression level of SRCIN1 decreased in the tumour tissues and cell lines of breast cancer. SRCIN1 under expression was also involved in the regulation of cell proliferation, colony formation, apoptosis and metastasis in breast cancer [21]. These findings suggest that the miR-331-3p/ SRCIN1 pathway should be investigated as a potential therapeutic strategy to inhibit the rapid growth and metastasis of breast cancer cells.

In conclusion, miR-331-3p was frequently up-regulated in breast cancer and might serve as an oncogene by directly targeting SRCIN1. MiR-331-3p can be used in miRNA-based therapy for the treatment of breast cancer. However, further studies are still required to evaluate the roles of miR-331-3p in vivo and in a clinical context.