#These authors contributed equally to this research

Objective: This study aims to study and discuss the promotion of microRNA-214 hypoxia-induced Pulmonary Hypertension (PH) in patients with molecular mechanisms of pulmonary artery smooth muscle cell proliferation, to provide a theoretical basis for clinical prevention and treatment of PH.

Methods: From January 2011 to December 2014 in our hospital for treatment of patients with Chronic Obstructive Pulmonary Disease (COPD) combined PH of 15 and 15 patients with COPD alone. All patients because associated with lung cancer underwent lobectomy, isolated and cultured Pulmonary Arterial Smooth Muscle Cells (PASMCs). In this study, luciferase assay techniques to determine the molecular targets of miR-214, and by RT-PCR and Western blot to detect the expression.

As a critical disease of respiratory system, Pulmonary Hypertension (PH) can cause the death of patients. Its pathological feature includes constriction and remodeling of pulmonary arterial vascular, which increases the artery resistance and leads to right ventricular dysfunction [1,2]. In histology, PH can influence various cell types of pulmonary arterial vascular, such as endothelial cells, smooth muscle cells and fibroblast. It is revealed that multiple genetic and environmental factors can result in the pathological change of histology where Pulmonary Artery Smooth Muscle Cells (PASMCs) play a core role. Recent studies showed that the promotion of PASMC was one of the principal pathomechanisms of the development of PH [3].

MicroRNAs (miRNAs) are small non-coding RNAs with the length of 21~23 nucleotides, which can mediate Posttranscriptional Gene Silencing (PTGS). After posttranscriptional processing in cell nucleus, mature miRNAs combine seed sequence by Watson-Crick bases to down-regulate the expression of specific messenger RNA (mRNA), which lead to the translational suppression of target genes. Therefore, it is recognized that miRNAs are involved in almost all physiological and pathological regulation [4].

It is indicated that over 30% COPD patients suffer from PH. These patients always have more serious airway obstruction and hypoxia, remarkably influencing the life quality and safety of patients. For a long period, PH caused by pulmonary artery remodeling is considered as a lung-related disease (e.g. hypoxia of chronic obstructive pulmonary disease). Conversely, PH can worsen pulmonary diseases, which leads to a life-threatening vicious circle. Recent research shows that miRNAs [5], specifically hypoxamiRs, have a material effect on physiological and pathophysiologic molecular mechanism of PH. The up- and down-regulation of hypoxamiRs plays a core role in the development of major complication PH of COPD.

Researches show that miR-214 is the only miRNA with significant up-regulation in PASMCs of patients with COPD and PH. It is widely involved in the development of PH in disease course of COPD, and related to proliferation of PASMCs in patients with COPD. However, few reports about mechanism study of miR-214 are available [6]. This study aims to study and discuss the promotion of microRNA-214 hypoxiainduced Pulmonary Hypertension (PH) in patients with molecular mechanisms of pulmonary artery smooth muscle cell proliferation, to provide a theoretical basis for clinical prevention and treatment of PH.

Study subjects include 15 COPD patients with PH and 15 COPD patients without PH who were treated in the Department of chest surgery from January 2011 to December 2014. All patients received pulmonary lobectomy due to lung cancer. Lung tissue samples were obtained from normal pulmonary parenchyma. The study protocol was approved by Research Ethics Committee, and all participant subjects signed an informed consent form.

Pulmonary artery segments (outer diameter 50-500 μm) collected from each subject were incubated in 1.5 mg/ml Hanks solution for 20 min. The surface of endarterium was gently removed by surgical knife after tweezing adventitia. Then 2.0 mg/ml collagenase and 0.5 mg/ml protease were added to digest the rest smooth muscle for 35-45 min at 37°C. The cells were cultivated in DMEM (containing 10% FBS, 100 U/ml penicillin and 100 mg/ml streptomycin) at 37°C in Rsbiotech with 5% CO2 in air. Medium was changed on alternate days and passage was processed in 0.05% trypsin- EDTA.

3'UTR of cell-cycle-related protein Cyclin L2 (CCNL2) can be amplified and subcloned to pcDNA3 by PCR. Site-directed mutation kit was used in the insertion of mutation sequence. PASMCs were inoculated in 96 well culture plates at inoculation density of 1 × 104/well followed by transient transfection. Dual-luciferase reporter gene detecting system (Promega Company) was applied to measure the activity of firefly and renilla luciferase.

Western blot of CCNL2 in PASMCs

Three reagents in kit were dissolved and mixed well on ice. PMSF (1:10) was added to appropriate cytoplasm protein extraction reagent. Meanwhile, PMSF (1:10) was added to appropriate nuclear protein extraction reagent 5 min before use. Cells in culture dish (density 90%) was washed with PBS once and digested with EDTA solution. After stirring and spreading, cells were collected by centrifugation at 12,000 rpm. Centrifuge tubes were upturned for several minutes for further cell precipitation and extraction. Then 520 μl cytoplasm protein extraction reagent mixed with PMSF (Reagent A) was added to each 52 μl cell precipitation, followed by strenuous vibration (5 sec) for cell suspension and dispersing. After icebath for 10 min, 26 μl nuclear protein extraction reagent mixed with PMSF (Reagent B) was added. Then strenuous vibration for 5 sec, ice-bath for 1 min and centrifugation at 12,000 rpm at 4°C for 5 min were orderly conducted. Supernatant was collected to a pre-cooled EP tube (avoiding precipitate) as cytoplasm protein. Equal sample was mixed with 5X sample buffer and heated in boiling water for 5 min. After rapid refrigeration in ice-bath, the sample used polyacrylamide gel electrophoresis with 10% lauryl sodium sulphate for electrophoretic separation. Separated protein was transferred to PVDF film through electro blotting. Then the film was dipped into confining liquid at room temperature for 1 h. After that, PVDF film was added to a bag containing primary antibody and incubated overnight at 4°C. After washing 3 times, PVDF film was moved to another bag containing second antibody and incubated for 1 h at room temperature. Finally, after washing 3 times, PVDF film was placed on preservative film to react with ECL reagent for 5 min. The reactants were moved to gelimaging analyser for development imaging in chemical exposure mode.

IBM SPSS 19.0 was applied for the statistical analysis of data. Measurement data was recorded as x̄ ± s and enumeration data was tested by χ2. Mean differences between groups were compared with t-test. Spearman's rank and correlation analysis were used for correlation analysis, and Logistic regression analysis for multiple-factor analysis. Difference was statistically significant when P<0.05.

According to online target prediction database (www.mirdb.org), miR-214 can directly bind to 3'UTR of CCNL2. As shown in Figure 1A, seed sequence of 3'UTR is compared with mature miR-214. Overall 3'UTR of CCNL2 was amplified and cloned to downstream plasmid of luciferase gene-pcDNA 3.0 carrier (marked as pcDNA3-CCNL2- WT-3'UTR). Besides, seed sequence in predicted target site of miR-214 was mutated in the construct (marked as pcDNA3- CCNL2-Mut2-3'UTR). Then hPASMCs, wild-type carrier, mutant carrier, blank luciferase carrier, pRL-TK Renilla luciferase carrier and miRNA mimics were cotransfected. We found that cotransfection of miRNA mimics inhibited the activity of about 50% CCNL2-3'UTR luciferase (Figure 1B). However, mutation of predicted target site of miR-214 on 3'UTR decreased the inhibiting effect of miR-214 (Figure 1B). These results indicated that miR-214 could inhibit the translation of target gene CCNL2 through the binding of seed sequence. 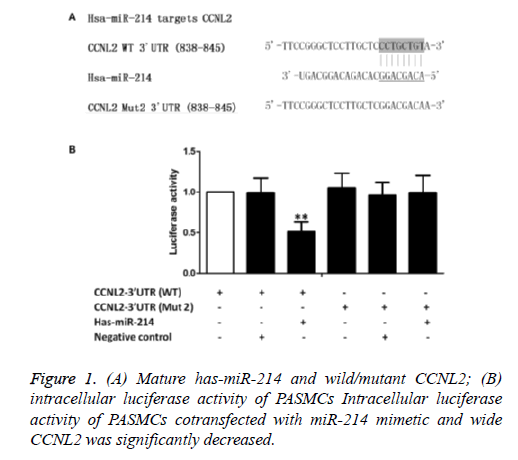 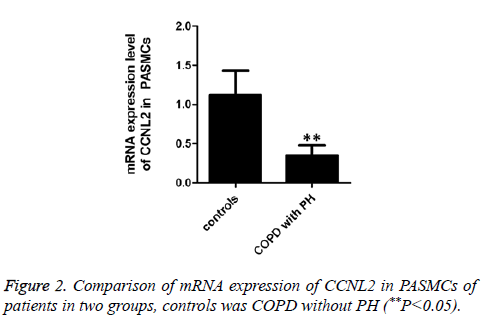 Figure 2: Comparison of mRNA expression of CCNL2 in PASMCs of patients in two groups, controls was COPD without PH (**P<0.05). 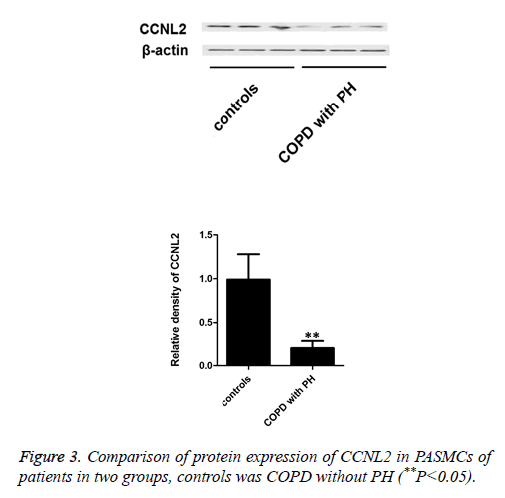 Figure 3: Comparison of protein expression of CCNL2 in PASMCs of patients in two groups, controls was COPD without PH (**P<0.05).

COPD is a disease of respiratory system with high morbidity and mortality. It is always complicated by PH due to various factors, where hypoxia is considered as one of the principal reasons. In the development of PH, constriction of pulmonary arterial vascular and proliferation of vascular smooth muscle cells can lead to arterial intima hypertrophy, increased pulmonary artery resistance and right ventricular dysfunction. As the main regulation molecules of cell metabolism and function, miRNA has been proved to participate in the development of hypoxia-induced PH. In this work, miR-214 can increase the proliferation of pulmonary artery smooth muscle cell by targeted inhibition of CCNL2 [7]. Previous researches showed that miR-214 level was significantly increased under hypoxia and ischemia condition of patients with diseases of cardiovascular system. Another study revealed that cell metabolism and function of patients with colon cancer was regulated through ErbB2/ErbB3 signal transduction pathway and up-regulation of miR-214 [8]. Recently, it is indicated that miR-214 can protect mice heart from ischemic injury through the control of calcium overload and cell death. Besides, with high sensitivity to H2O2, miR-214 can protect myocardial cells by inhibiting H2O2-induced cell apoptosis. In impaired arterial tissue of rats, the expression of miR-214 is up-regulated measured by qRT-PCR and Northern blot [9]. These results above show that miR-214 can suppress apoptosis as an antiapoptosis factor. In our work, we applied Luciferase assay to confirm that CCNL2 was the target molecule of miR-214. Meanwhile, mRNA and protein expression level of intracellular CCNL2 were significantly decreased in PASMCs after transfection of miR-214 mimics, which further proved our opinion.

Cell-cycle-related protein plays an important role in the regulation of cell proliferation. Several cell-cycle-related proteins have been proved as key regulation molecules of gene translation. Different with other members of protein family, CCNL2 has a RS region in C-terminal, acting as a regulation mark of proteins for mRNA pre-processing. For example, serine/arginine splicing factor (SR protein) has more than one RNA binding site and SR protein-related polypeptide. It is reported that CCNL2 is involved in the regulation of cell cycle and the signal transduction of apoptosis. Li et al. [10] found that ectopic overexpression of CCNL2 could cause direct anti-proliferation effect and increase sensibility to fluorouracil and docetaxel for BCG823 gastric cancer cells. The transfection of miR-214 mimics to PASMCs significantly increased PASMCs proliferation by suppressing the anti-proliferation effect of CCNL2. Yang et al. [11] revealed that CCNL2 had direct anti-proliferation effect on human lung adenocarcinoma cell line A549, and CCNL2 suppression would increase the proliferation of A549 cells. These results are consistent with our work.

In summary, microRNA-214 can down-regulation of CCNL2 in PASMCs.