Lung cancer is the most common cancer and the leading cause of cancer-related deaths in men and women globally. Increasing evidence has demonstrated that microRNAs (miRNAs) may be critical regulators in cancer-related processes. Therefore, understanding the molecular mechanism between Non-Small Cell Lung Cancer (NSCLC) and abnormal miRNA expression levels may help identify novel diagnostic biomarkers and therapeutic targets for patients with NSCLC. MiRNA-18b (miR-18b) is abnormally expressed in multiple types of human cancers. However, the expression pattern, function and underlying mechanisms of miR-18b in NSCLC have yet to be elucidated. This study aimed to detect the expression levels of miR-18b, explore the regulatory roles of miR-18b in NSCLC and reveal the possible underlying mechanisms of miR-18b involved in this process. Experiments indicated that miR-18b was upregulated in NSCLC tissues and cell lines. MiR-18b downregulation suppressed the proliferation and invasion of NSCLC cells. Runt-related transcription factor 3 (RUNX3) was identified as a direct target of miR-18b in NSCLC by a series of experiments. Moreover, RUNX3 overexpression played the same role as miR-18b under expression in NSCLC cells, by a series of experiments. These findings suggested that miR-18b inhibition may provide a novel effective therapeutic method for patients with NSCLC.

Lung cancer is the most common cancer and the leading cause of cancer-related deaths in men and women globally [1,2]. This disease may be subdivided into small-cell lung carcinoma and Non-Small-Cell Lung Carcinoma (NSCLC) according to histological characteristics [3]. NSCLC is the most common lung cancer subtype that accounts for approximately 85% of the total number of patients with lung cancer [4]. Patients with localized NSCLC that has not spread to lymph nodes are primarily treated with surgery. Patients with this disease are also subjected to radiotherapy, chemotherapy or a combination of targeted therapies [5,6]. Despite the remarkable progress in treatments, the prognosis of patients with NSCLC remains unsatisfactory with a 5 y overall survival rate of 16% [7] because of late disease presentation, tumour heterogeneities within histological subtypes and relatively limited understanding of NSCLC formation and progression [8,9]. Therefore, the molecular mechanisms underlying the tumourigenesis and tumour development of NSCLC should be further investigated to develop novel and effective therapeutic targets for patients with this fatal disease.

MicroRNAs (miRNAs) are a large family of non-coding, endogenous and short RNA molecules with approximately 20-24 nucleotides in length [10]. miRNAs are known as critical gene regulators that directly interact with the 3’-Untranslated regions (3’-UTRs) of their target genes in a base-pairing mechanism, thereby inhibiting translation and degrading target mRNA [11,12]. It has been reported that over 1000 miRNAs are encoded by the mammalian genome, and all miRNAs likely regulate about one-third of all human genes [13,14]. Numerous miRNAs are also dysregulated in various types of human cancers, such as NSCLC [15], gastric cancer [16], breast cancer [17] and bladder cancer [18]. Abnormally expressed miRNA may serve as tumour suppressors or oncogenes, which regulate a wide range of biological processes, such as proliferation, apoptosis, invasion and metastasis [19-21]. Hence, the investigation of miRNA expression patterns, roles and molecular mechanism may have great potential as a prognostic marker and therapeutic targets for antitumor therapy.

This study was approved by the Ethics Committee of The First Affiliated Hospital of Dalian Medical University. Written informed consents were also obtained from the all participants. A total of 46 paired NSCLC tissues and adjacent non-tumor tissues were collected from NSCLC patients who underwent surgery resection at Department of Thoracic Surgery, The First Affiliated Hospital of Dalian Medical University, between July 2015 and April 2017. None of these patients were treated with radiotherapy or chemotherapy prior to surgery. Tissue specimens were immediately frozen in liquid nitrogen and stored at -80°C until further use.

Cell proliferation was determined using the CCK8 assay according to the manufacturer’s protocol. Transfected cells were collected at 24 h post-transfection, and seeded into 96- well plates at a density of 3000 cells/well. After 0, 24, 48, or 72 h incubation at 37°C with 5% CO2, 10 μl of CCK8 reagent (Dojindo Molecular Technologies, Inc., Kumamoto, Japan) was added into each well. Cells were incubated at 37°C with 5% CO2 for an additional 2 h. The value of absorbance was measured at a wavelength of 450 nm using an ELISA reader (Bio-Rad Laboratories, Inc., Hercules, CA, USA).

Transwell chambers coated with Matrigel (Becton-Dickinson, Franklin Lakes, NJ, USA) were used to evaluate cell invasion ability. After 48 h of transfection, cells were harvested, suspended in FBS-free DMEM and seeded into the upper compartment of the chamber at a density of 5 × 104 cells. A total of 500 μl DMEM containing 20% FBS was placed in the chamber. Following incubation at 37°C with 5% CO2 for 24 h, the non-invasive cells were removed with cotton swabs. The invasive cells were fixed with 100% methanol, stained with 0.5% crystal violet, washed with PBS and dried in air. The number of invasive cells were photographed and counted using an inverted light microscope (CKX41; Olympus Corporation, Tokyo, Japan; magnification, X200).

The results were expressed as the mean ± Standard Deviation (SD). SPSS 17.0 (SPSS, Inc., Chicago, IL, USA) was used for statistical analysis with Student's t-tests or one-way ANOVA. SNK (Student-Newman-Keuls) was used to compare between two groups in multiple groups study. In all data analyses, P<0.05 was considered statistically significant.

MiR-18b expression is upregulated in NSCLC tissues and cell lines

To clarify the biological roles of miR-18b in NSCLC progression, RT-qPCR was performed to measure the miR-18b expression level in 46 paired NSCLC tissues and adjacent nontumour tissues. In Figure 1A, miR-18b was significantly upregulated in NSCLC tissues compared with that in adjacent non-tumour tissues (P<0.05). The miR-18b expression levels were determined in four human NSCLC cell lines, namely, A549, H460, SK-MES-1 and SPC-A1, and one nontumourigenic bronchial epithelium cell line, namely, BEAS-2B. RT-qPCR confirmed that the miR-18b expression was higher in the four NSCLC cell lines than in BEAS-2B (Figure 1B, P<0.05). These results suggested that miR-18b may be involved in NSCLC initiation and progression. 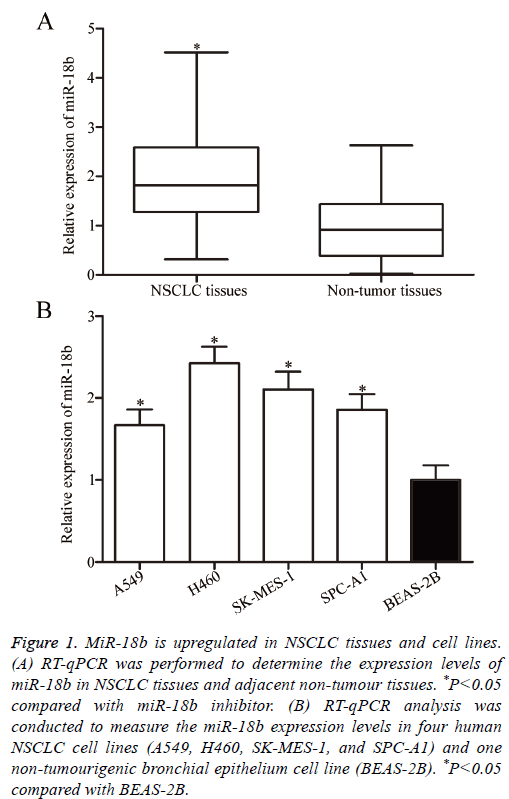 Figure 1: MiR-18b is upregulated in NSCLC tissues and cell lines. (A) RT-qPCR was performed to determine the expression levels of miR-18b in NSCLC tissues and adjacent non-tumour tissues. *P<0.05 compared with miR-18b inhibitor. (B) RT-qPCR analysis was conducted to measure the miR-18b expression levels in four human NSCLC cell lines (A549, H460, SK-MES-1, and SPC-A1) and one non-tumourigenic bronchial epithelium cell line (BEAS-2B). *P<0.05 compared with BEAS-2B.

To elucidate the potential effects of miR-18b on the tumourigenicity of NSCLC cells, miR-18b inhibitor or NC inhibitor was transfected into H460 and SK-MES-1 cells, which expressed a relatively higher miR-18b expression level. After transfection was completed, RT-qPCR was conducted to evaluate the transfection efficiency. RT-qPCR data indicated that miR-18b was downregulated in H460 and SK-MES-1 cells transfected with miR-18b inhibitor (Figure 2A, P<0.05). 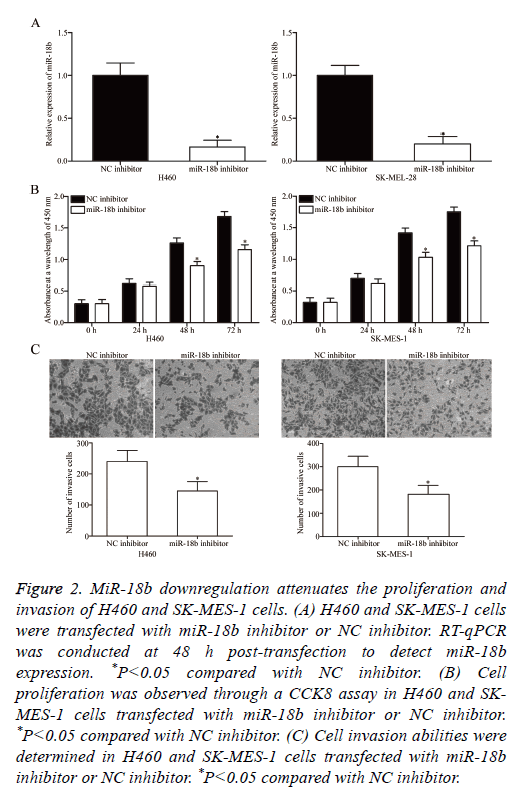 The effect of miR-18b under expression on NSCLC cell proliferation was assessed by CCK8 assay. In Figure 2B, miR-18b downregulation inhibited the proliferation of H460 and SK-MES-1 cells (P<0.05). The effects of miR-18b on the invasion abilities of NSCLC cells were investigated through Transwell invasion assay, and the results revealed that miR-18b knockdown markedly decreased the invasion capacities of H460 and SK-MES-1 cells (Figure 2C, P<0.05). These results suggested that miR-18b may play a crucial role in NSCLC cell growth and metastasis.

RUNX3 is a direct target of miR-18b in NSCLC

To understand the mechanisms responsible for the oncogenic roles of miR-18b in NSCLC, bioinformatics analysis was performed to search for the possible targets of miR-18b. Among these targets, RUNX3 was selected for further confirmation because it exhibits weak expression in NSCLC and contributes to NSCLC occurrence and development [26-29]. Two high-scoring binding sites of miR-18b were found on the 3’-UTR of RUNX3 (Figure 3A). To confirm this hypothesis, we conducted luciferase reporter assays and explored whether miR-18b can directly target the 3’-UTR of RUNX3. MiR-18b inhibitor or NC inhibitor was transfected into HEK293T cells, together with pGL3-RUNX3-3’-UTR Wt (1 and 2) or pGL3-RUNX3-3’-UTR Mut (1 and 2). In Figures 3B and 3C, the transfection of miR-18b inhibitor significantly upregulated the luciferase activities when this inhibitor was cotransfected with the wild-type 3’-UTR of RUNX3 (1 and 2) in H460 and SK-MES-1 cells (P<0.05). Conversely, the regulatory effect of miR-18b on luciferase activities was abolished after the inhibitor was co-transfected with the mutant 3’-UTR of RUNX3 (1 and 2). We also explored whether miR-18b can regulate the endogenous RUNX3 expression in NSCLC. RT-qPCR and Western blot analysis were conducted to detect the mRNA and protein expression of RUNX3 in H460 and SK-MES-1 cells transfected with miR-18b inhibitor or NC inhibitor. The results showed that the miR-18b downregulation increased the mRNA (Figure 3D, P<0.05) and protein (Figure 3E, P<0.05) expression levels of RUNX3 in H460 and SK-MES-1 cells. These results suggested that RUNX3 is a direct target of miR-18b in NSCLC. 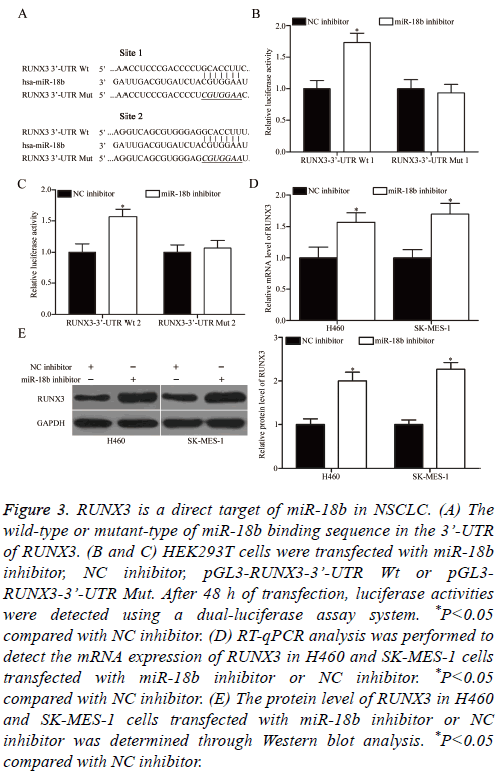 Upregulation of RUNX3 imitates the roles of miR-18b in NSCLC 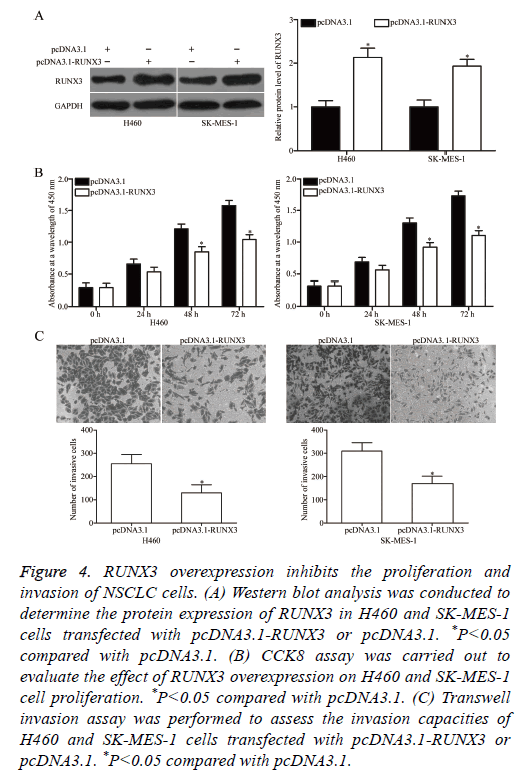 Increasing evidence has demonstrated that miRNAs may be critical regulators in cancer-related processes [30,31]. Therefore, understanding the molecular mechanism between NSCLC and abnormal miRNA expression levels may help identify novel diagnostic biomarkers and therapeutic targets for patients with NSCLC. In this study, miR-18b was upregulated in NSCLC tissues and cell lines, and the downregulated miR-18b inhibited the proliferation and invasion of NSCLC cells. RUNX3 was also identified as a novel direct target gene of miR-18b in NSCLC, and RUNX3 overexpression played the same role as miR-18b under expression in NSCLC cells. These findings suggested that miR-18b may be a novel target for the therapy of patients with NSCLC.

MiR-18b is identified as a tumour suppressor in several types of human cancers. For instance, Chen et al. reported that miR-18b upregulation inhibits melanoma cell proliferation, colony formation and glycolysis, induces cell cycle arrest in the G1 stage in vitro and reduces tumour growth in vivo [23,32,33]. Nevertheless, miR-18b is identified as an oncogene that accelerates breast cancer cell migration [24]. Murakami et al. found that ectopic miR-18b expression promotes cell proliferation and decreases cell adhesion ability in hepatocellular carcinoma [22]. These conflicting findings indicated that the functions of miR-18b in tumours are diverse and tissue specific because of the non-ideal complementarity of the interactions between miRNAs and their direct target genes. These findings also suggested that miR-18b is a promising molecular target for the treatment of these diseases.

Several direct miR-18b targets, including HIF-1α [23], MDM2 [32,33] in melanoma and TNRC6B [22] in hepatocellular carcinoma, have been validated. In this study, RUNX3 was demonstrated as a direct target of miR-18b in NSCLC. RUNX3 is downregulated in multiple types of human cancers, including ovarian cancer [34], bladder cancer [35], prostate cancer [36], breast cancer [37], gastric cancer [38] and colorectal cancer [39]. Functional studies have demonstrated that RUNX3 serves as a tumour suppressor that inhibits cell proliferation, colony formation, migration, invasion and angiogenesis and promotes cell cycle arrest and apoptosis [40-43]. In NSCLC, RUNX3 expression levels are lower in tumour tissues [26] and may be associated with promoter hypermethylation [44]. Low RUNX3 levels are correlated with poorly differentiated types in patients with NSCLC [26]. The 5-year survival rate of patients with NSCLC and high RUNX3 levels is higher than that of patients with low miR-18b expression levels [26]. RUNX3 participates in NSCLC formation and progression through the regulation of cell proliferation [27], epithelial-mesenchymal transition [28] and tumourigenesis [29]. Combining previous findings with our results, we recommend that the miR-18b/RUNX3 pathway should be further investigated as a therapeutic strategy for patients with NSCLC.

In conclusion, this study demonstrated that miR-18b was significantly upregulated in NSCLC. In vitro studies revealed that miR-18b under expression suppressed the proliferation and invasion of NSCLC cells. RUNX3 was mechanistically identified as a direct target gene of miR-18b in NSCLC, and miR-18b might be a novel target for the therapy of patients with NSCLC.