The present study aimed to evaluate the prevalence and antimicrobial susceptibility, of aerobic and anaerobic strains in 100 patients with head and neck (single and multiple) abscesses. In total, 114 microbes were isolated. The sensitivity test was performed for both aerobic and anaerobic isolates. Out of 100 patients (65 males, 35 females), 74 presented with single space abscess and 26 patients with multiple space involvement. The submandibular space was the most frequent location for single space and multiple abscesses (76.92%; 84.92%). Predominantly 48 aerobic and 65 anaerobic bacteria were isolated; the most common bacteria being Klebsiella, Clostridium tertium, Staphylococcus aureus and Actinomyces odontolyticus. The anaerobic bacteria were found to be 100% resistant to amoxicillin and penicillin, whereas they were found to be susceptible to erythromycin (100%), cefotaxime (98.48%) and clindamycin (96.96%) respectively. On the other hand, the aerobic strains were resistant to penicillin (47.91%) and sensitive to amoxicillin (79.16%) respectively. Hence, the antibiotics alone cannot determine the odontogenic infection satisfactorily. For immediate recovery of patients, proper basic management of the disease is also equally important.

The incidence, severity, morbidity, and mortality of odontogenic infections have declined dramatically over the years. This reduction in mortality is not attributed to the use of penicillin but is due to the application of the principles of the initial establishment of airway security, followed by early and aggressive surgical drainage of all anatomical spaces affected by cellulitis or abscesses. With the use of antibiotics and advanced medical supportive care, mortality associated with Ludwig’s angina has reduced to 4% [1].

Head and neck abscesses are less common today than they were in the past. The impact of antibiotic treatment and improved dental care are the most likely reasons for this change. However, in spite of the widespread use of antibiotics, deep neck infections remain one of the difficult emergencies encountered in daily clinical practice. Once an abscess occupies one of the deep neck spaces, the infection can spread across the spaces or damage the adjacent vital neural or vascular structures. The extent and severity of the illness could become life threatening. In addition to the systemic toxicity and localized respiratory and digestive tract disturbance, more serious complications, including air- way obstruction, pneumonia, lung abscess, mediastinitis, pericarditis, internal jugular vein thrombosis, and carotid artery erosion may also occur [2-5].

Besides adequate drainage of the abscess, antibiotic therapy is essential for the successful treatment. To administer antimicrobial agents effectively to a patient, microbiological data on the abscess must be obtained. However, it usually takes several days to get the necessary data, and consequently empiric antimicrobial therapy is frequently launched before the definite culture result is available. Most head and neck infections are endogenous and mixed [6]. So, the antibacterial treatment of mixed infections should cover both aerobes and anaerobes. Resistance rates for anaerobes vary within species as well as within sources of the isolates. According to several authors [7-9], resistance rates to some antibacterial agents (such as ampicillin/sulbactam and clindamycin) have shown a tendency to increase.

Recent reports have confirmed that oral/dental infections are polymicrobial, including facultative anaerobes, such as Viridans group streptococci and the Streptococcus anginosus group, with predominantly strict anaerobes, such as anaerobic cocci, Prevotella and Fusobacterium species. The use of sophisticated non-culture methods has identified a wider range of organisms, such as Treponema species and anaerobic Grampositive rods such as Bulleidia extructa, Cryptobacterium curtum, and Mogibacterium timidum [10]. So, in the present study an attempt was made to find out the efficacy of standard antibiotics against the odontogenic infection causing microbes.

Samples and isolation of microorganisms

Patients those reported Department of Clinical Laboratory, Yantai Yuhuangding Hospital, Qingdao University, Yantai, Shandong, China during 2013-14 were enrolled in the present study. Pus samples were collected from 100 odontogenic infected patients by aspirating abscess using sterile 18/22- gauge needle and 5 ml syringe either intraorally or extraorally. After aspiration, a drop of specimen was immediately inoculated in sterile Robertson cooked meat broth (RCM) for isolation of anaerobic organisms. The inoculated RCM was incubated at 37ºC for 48 h and subcultured into solid media. The plate was incubated anaerobically in McIntosh field jar at 37ºC for 48 h. For aerobic culture the samples were inoculated on blood agar (BA), McConveys agar (MA), and nutrient broth. Incubation was done aerobically at 37ºC for 24 h. The colonies were then sub cultured into nutrient agar.

In order to prepare the bacterial inoculum, a single colony was inoculated in nutrient broth and incubated overnight. After that, the turbidity was adjusted using Mc Farland standards. The Muller Hinton agar medium (MHA) was prepared as per manufacturer’s instructions (Hi-Media). The susceptibility testing was done using disc diffusion method of Kirby-Bauer. The discs (30 mcg) used for both aerobic and anaerobic bacteria were of amoxicillin, ampicillin, clindamycin, ciprofloxacin, ceprotaxime, penicillin, erythromycin, gentamicin and methicillin (Hi-Media) and sensitivity was accessed according to manufacturer instructions. The experimental plates were incubated at 37ºC for 24 h. All experiments were conducted in triplicates and the results were concurrent [11]. 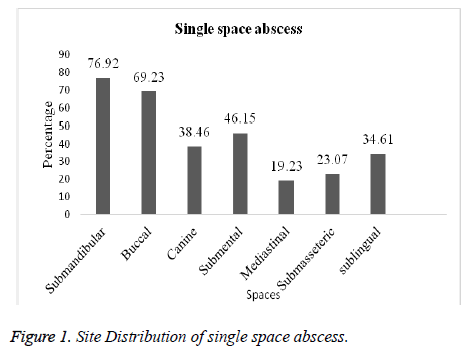 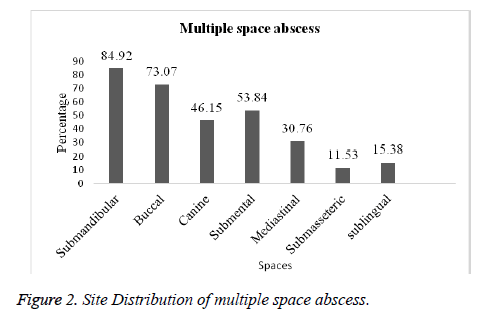 The susceptibility and resistance patterns were checked using standard antibiotics against the gram positive, gram negative aerobic and anaerobic bacteria. The anaerobes were found to be 100 % resistant to ampicillin and penicillin, whereas only 47.91 % of aerobic bacteria exhibited resistance to penicillin followed by 27.08% being resistant to ampicillin, 4.54% to gentamicin and 1.51% to amoxicillin. The aerobic bacteria were found to be resistant against cefotaxime and ciprofloxacin. There was no resistance observed against clindamycin, erythromycin and methicillin in both aerobic and anaerobic microbes. The anaerobes were found to be susceptible to erythomycin (100 %) followed by cefotaxime (98.48 %), clindamycin (96.96 %) and amoxicillin (60.60 %) respectively. The susceptibility to methicillin (22.72%), gentamicin (22.72%) and ciprofloxacin (9.06%) was less as compared to the above mentioned drugs. Further, anaerobes were not susceptible to ampicillin and penicillin. However, the aerobes were susceptible to amoxicillin (79.16%), erythromycin (45.83%), methicillin (37.50%), clindamycin (31.25%), penicillin (20.83%), gentamicin (18.75%), cefotaxime (16.66%) and ampicillin (12.50%) respectively. They were not susceptible to ampicillin (Table 2).

In the early 1960s, teeth were listed as the fifth or sixth leading cause of death recorded on the London Bills of Mortality [12]. At the beginning of the twentieth century, dental infections were found to be associated with a mortality rate of 10-40%. Odontogenic bacterial infection is still reported as being the most common cause of orofacial sepsis. This was illustrated by Amaidas [13] who showed the prevalence of 56.7% for odontogenic only causes and 21.7%, where the tooth was left in the jaw line of fracture. Flynn et al. [14] found that 65% of odontogenic abscesses were caused by caries, 22% by pericoronitis and 22% by periodontal infections. Other studies also supported the finding that odontogenic infections are the most common cause of orofacial sepsis [15-17]. Head and neck infections of odontogenic origins are routinely treated. Untreated or rapidly spreading odontogenic infections can be potentially life threatening secondary to airway compromise or septicemia [18].

In the present investigation 100 patients with odontogenic space infections were considered. Out of these 65 were males and 35 females. Both were infected by single and multiple space abscesses. Walia et al. [18] reported that out of the 42 patients, 28 (66.66 %) were presented with single space involvement and 14 patients with multiple space involvement, with a total of 64 spaces being involved. Male patients were more common than female patients [19-20]. An odontogenic infection spreads to fascial spaces because the anatomy of the fascial planes of the head and neck is such that it has an ineffective barrier to the spread of infection [21], and plays a vital role in the clinical localization of an abscess. The involvement of the fascial planes by cellulitis, aids in the surgical drainage. Of the 28 patients with single space involvement, submandibular space was involved in 8 patients (28.57 %), buccal space in 6 patients (21.42 %) and, canine space in 5 patients (17.85 %) [18].

The most commonly isolated organisms from aerobic bacteria were Klebsiella sp. (17.54%), Staphylococcus aureus (14.03%), Streptococcus sp. (4.38%), Pseudomonas aeuroginosa (3.50%) and Streptococcus mutans (2.63%). This finding was concurrent with that of Santosh et al. In the present study, all anaerobic bacteria were 100% resistant to ampicillin and penicillin. They were highly sensitive to Erythromycin 66 (100%) followed by Clindamycin 65 (98.48%) Cefotaxime 64 (96.96%) and Amoxicillin 40 (60.60%). At the same time it was less susceptible to Methicillin 15 (22.72%) and Gentamicin 10 (15.15%). This study was compared with Kuriyama et al. [26], Flynn et al. [14] and Santosh et al. [20]. Aerobic strains were highly susceptible to Amoxicillin 38 (79.16%) and moderate to other antibiotics. They were only 47.91% resistant create for Penicillin and for other antibiotics the resistance level was very less. In the present investigation, selected antibiotics are found to actively work against anaerobic bacteria as compared to aerobic bacterial strains.

The microbial infection accounts for most single and multiple head and neck abscesses. Gram-positive, gram-negative aerobes and anaerobes are most common pathogens for head and neck space infections. Erythromycin, cefotaxime, clindamycin and amoxicillin could be good candidates for treating both aerobic and anaerobic head and neck abscess involvement. One thing to remember, the antibiotic alone cannot determine the odontogenic infection satisfactorily, without forgetting the importance of early surgical intervention to reduce morbidity and complications. For immediate recovery of patients, proper basic management of the disease is also equally important.