Method development and validation of Ipratropium bromide by HPLC.

The present work was focused on the development and validation of High-Performance Liquid Chromatography (HPLC) method which is simple, rapid, precise, accurate, sensitive, and economical for the quantitation of Ipratropium bromide in bulk and capsule dosage form has been validated. The chromatographic separation was attained on Agilent zorbax bonus-RP column with dimensions (250 × 4.6 mm, 5μ) particle size employing 0.1% Trifluoroacetic acid and Acetonitrile (ACN) in the ratio of 70:30% v/v as mobile phase, which was pumped at a rate of 1.0 ml/min and detected at a wavelength of 210 nm. The linearity of the method was demonstrated in the concentration range of 24-56 μg/ml for Ipratropium bromide with a correlation coefficient (r²) of 0.999. Percentage drug recovery was found to be 99.03%-100.08%, and percentage relative standard deviation was <2%. Limit of detection and limit of quantification values were found to be 1.15 μg/ml and 3.49 μg/ml, respectively, and assay of marketed capsule formulation was found to be 99.44%. The developed HPLC method was found to be simple, specific, sensitive, rapid, linear, accurate, precise, and economical and could be used for regular quality control of Ipratropium bromide in bulk and capsule formulation.

• Then add 0.8 ml of SSS-I in 10 ml volumetric flask and add 5 ml diluents and vortex and make up the volume with diluents. (Conc. of Ipratropium bssromide=40 μg/ml).

The sample was scanned from 200-400 nm with PDA detector. The Wavelength selected for analysis chosen was 210 nm on basis of appropriate intensity of Ipratropium bromide (Table 1) (Figures 1 and 2). 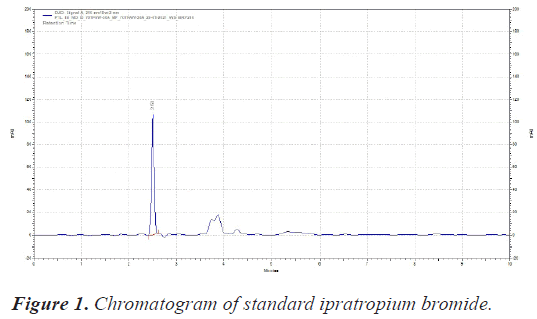 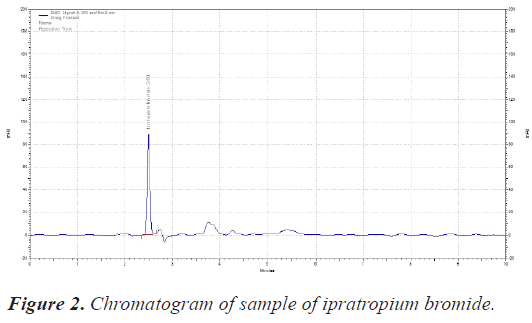 • 20 Capsule contents were weighed and average weight was calculated. And the content was mixed in mortar and pestle.

Stock solution of Ipratropium bromide at a concentration of 60%-140% was prepared in the mobiles phase. From the stock several dilutions between 24-56 μg/ml were prepared and injected into the column at a rate of 1 ml/min at injection volume of 10 μL. The calibration curve was plotted using area of retention time versus concentrations μg/ml. linear regression analysis was used to assess the linearity using least square regression method.

The assay precision was carried out by interday and intraday study and the process was evaluated for solutions (24,32,40,48,56 μg/ml) and were analyzed at different time points. The RSD (Relative Standard Deviation) was calculated for the methods.

Limit of detection and limit of quantification

The Limit of Detection (LOD) and Limit of Quantification (LOQ) were determined according to ICH guidelines by the below mentioned formulae (Table 2).

SE=Standard Error of Y intercept; A=Slope of the calibration curve. 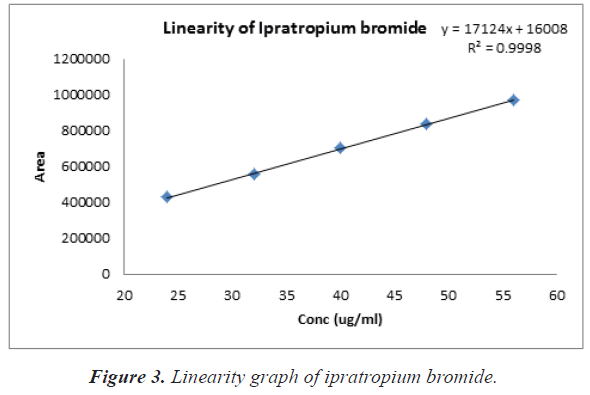 The developed HPLC method is able to determine Ipratropium bromide in raw materials and in pharmaceutical dosage forms; this can be attributed to the good separation and resolution of the chromatographic peaks with optimum retention time of 2.50 minutes. The results were in good conformity with the affirmed statistical and pharmacopeial contents. Hence, this method can be considered to be precise, reliable, rapid, simple, sensitive and economical nature.

The authors extend a deep sense of gratitude to management and principal of Sahyadri College of Pharmacy, methvade, sangola for providing all necessary support and facility to complete this research work.