Introduction: In vitro and earlier animal studies implicated altered metabolism of caffeine as a probe for CYP1A2 enzyme activity in diabetic disease state. However clinical studies in humans reported controversial findings. This study is aimed to compare the differences in the metabolism of caffeine in Non-Insulin Dependent Diabetes Mellitus (NIDDM) patients and in healthy subjects by using Physiologically Based Pharmacokinetic (PBPK) modelling with SimCYP simulator.

Methodology: A mechanistic Physiologically Based Pharmacokinetic (PBPK) model based disposition study for caffeine in healthy subjects and in diabetic patients using SimCYP simulator was performed by altering the CYP1A2 abundance as reported earlier. Prior to using the model for predictions in diabetic patients, model was validated for accuracy by comparing the model predicted and observed pharmacokinetics of caffeine from four independent clinical trials in healthy subjects.

Results and Conclusions: Results from the study confirmed the accuracy of the default SimCYP model for predicting caffeine pharmacokinetics in healthy Caucasian subjects. PBPK model for NIDDM patients found that Caucasian diabetic patient’s caffeine clearance is 37% higher in comparison with healthy subjects and there by reduced exposure of the drug in diabetic patients suggesting a similar fate for other CYP1A2 substrates. Simulations also suggested a clinical trial design that could be utilized to further study the real differences in caffeine disposition in diabetic patients in comparison to healthy subjects.

Non-Insulin Dependent Diabetes Mellitus (NIDDM) is highly prevalent worldwide. Moreover, number of patients with NIDDM is increasing with time [1-3]. NIDDM patients are subjected to vascular changes attributed mainly due to hyperglycemic states and are prone to cardio-vascular complications [4]. NIDDM can potentially cause alterations in the disposition and metabolism of xenobiotics [5,6].

Caffeine apart from being constituent of beverages is also commonly used as probe in clinical trials to determine the enzyme activity of CYP1A2 enzyme [7]. Xenobiotics which are CYP1A2 substrates are clinically important drug candidates as they are used in important ailments such as cardiovascular, central nervous system diseases [8-10] and include drugs with narrow therapeutic window [11]. Data on caffeine metabolism is handy for researchers to understand the pharmacokinetic variations of other CYP1A2 substrates.

Disposition of drugs in living organisms is a summation of drug absorption, distribution, metabolism and elimination, alterations in anyone or more eventually effects the overall drug exposure [12,13]. Physiological status of an individual is one of the major contributors for differences in the drug disposition [14]. In diabetes, physiological alterations are noted which perhaps can account for the alterations in the disposition of xenobiotics [5,6]. Fortunately, numerous physiological data is made available and is being used in mathematical modeling of drugs and their disposition. Physiologically Based Pharmacokinetic (PBPK) modeling can be used to predict pharmacokinetics of drugs based on the physiological parameters. PBPK utilizes the wealth of the data on physiological parameters of an individual known as “System data” and the drug data known as “compound data”, which can be as little as physio-chemical properties in some cases to predict the drug disposition [15].

SimCYP simulator is a handy tool which incorporates mechanistic PBPK modeling to predict the deposition of xenobiotics in different scenarios for instance in patients with altered physiology or drugs co-administered with other drugs [16].

This study was performed in two phases. Phase 1, validation of PBPK model for caffeine, default PBPK model for caffeine from SimCYP simulator V 14.0.93 (SimCYP Limited, Sheffield, UK) was utilized by using caffeine compound data from the Table 1 and compared with the real-time caffeine disposition from four clinical trials [28-31]. Phase 2, application of the PBPK model to NIDDM patients, validated PBPK model from phase 1 of the study for caffeine disposition was used to stimulate the disposition of caffeine in virtual populations comprising of 2 groups, Group 1 non-diabetic healthy and group 2 diabetic patients. For group 2 diabetic patients CYP1A2 abundance in SimCyp was adjusted to reflect 42% rise in activity as reported previously by Matzke et al. [25]. Study power was also estimated in the range of 5-500 subjects/patients in each group by setting the statistical significance level to less than 0.01 (p<0.01).

Phase 1 of the study

Validation of PBPK model for caffeine in healthy subject: The compound data for SimCYP input for caffeine was partially obtained from the “Pubchem open chemistry database” and some of the parameters used as default values as in the compound file. Table 1 summarizes the SimCYP input data used.

Advance, Dissolution, Absorption, and Metabolism (ADAM) model in SimCYP to predict absorption and enzyme kinetics to predict the metabolism of caffeine with the contribution of different cytochrome P450 (CYP P450) enzyme was utilized from the default SimCYP compound library for caffeine, Table 1. Minimum PBPK model was implemented and the volume of distribution at steady state was estimated by Rodgers et al. method [32] (SimCYP Method 2).

Phase 2 of the study

PBPK model application to simulate caffeine disposition in diabetic patients: Disposition of single oral dose of 250 mg of caffeine in two groups, healthy male subjects and another created group termed as “NIDDM patients” was simulated in SymCyp by using inputs mentioned in Table 1. Study power was estimated to pick a difference in AUC0-24 of caffeine using multiple populations. Ratio for females to males set to “0.5” to indicate equal number of males and females in each group. Only difference in two groups of patients was the liver abundance of CYP1A2 enzyme. NIDDM patients were set to have CYP1A2 abundance value at “74” to reflect the 42% enhanced activity in comparison to non-diabetic patients as reported earlier [25]. For power calculations minimum and maximum patients were set to 5-500 with 20 steps.

Individual pharmacokinetic calculations for caffeine in healthy subjects and in the diabetic patients groups are calculated by non-compartment analysis and were obtained as the simulation outputs with SimCYP.

All the statistical analysis was performed in R package. Test for normality for each PK parameter was performed visually by plotting histograms, box plots and Quantile-Quantile (QQ) further tested by Shapiro test and Anderson darling test (additional R package “nortest” installed). Parameters with the p>0.05 for both Shapiro and Anderson darling test were regarded to reject the null-hypothesis of normal distribution of respective parameter. Parameters failed to show normal distribution were log transformed and subjected to normality test again. Even after the log transformation if parameters failed to pass the test for normal distribution, differences in the medians were compared non-parametrically using Mann- Whitney U test for statistical significance level of “0.05”. 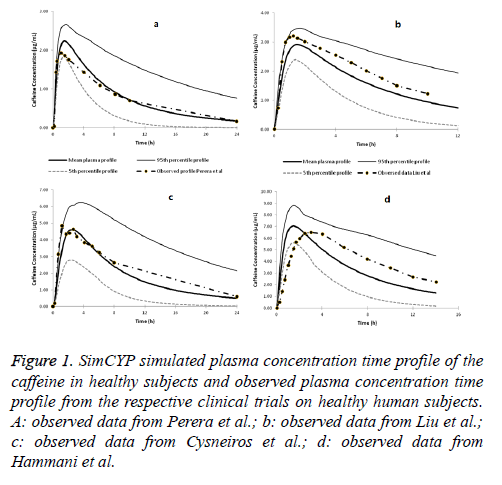 Power calculations: As expected power of the study to detect the changes in AUC0-24 improved with the sample size and the value converged at sample size of 121 with 100% power in each arm of the study. For phase 2 simulation studies, sample size used was set at 35 subjects each for both healthy and NIDDM patients which had a study power of more than 80% at significance of p=0.01 (Figure 2). 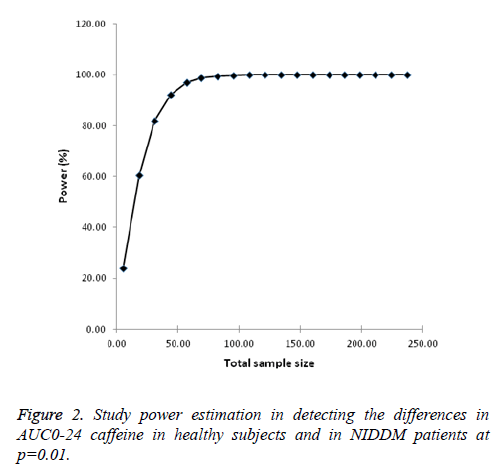 Figure 2: Study power estimation in detecting the differences in AUC0-24 caffeine in healthy subjects and in NIDDM patients at p=0.01.

Table 3: SimCYP simulated pharmacokinetics of caffeine in healthy subjects and in diabetic patients. 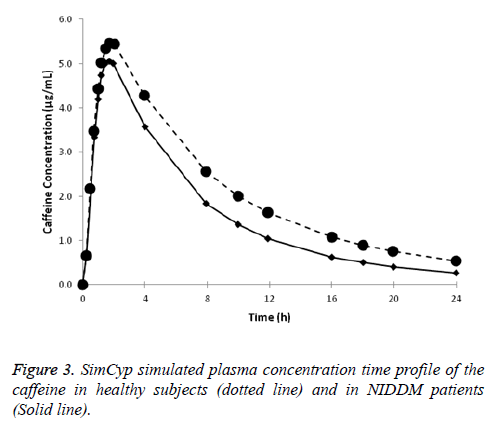 Results from this study indicate 37% rise in caffeine clearance in NIDDM patients in comparison to healthy, non-diabetic individuals of similar age. These results may also suggest similar increase in metabolism of CYP1A2 substrates in diabetic patients in comparison to healthy subjects as it is a common practice to drive clinical evidence on the CYP1A2 activity by studying the metabolism of caffeine as a probe drug. These results support the argument from in vitro and early animal studies that there is a variation in CYP1A2 activity in diabetic disease state. However Zysset et al. [24] failed to produce such effects perhaps due to the less sample size studies to pick the difference due to high variability in CYP1A2 enzyme abundance in humans. Power calculations from the current study also indicate that a sample size of about 31 subjects in each arm of the parallel design study comprising of group of healthy subjects and diabetic patients have a power of 80% to detect the difference in clearance between the two groups with 95% confidence in the results. None of the clinical studies conducted so far included number of subjects at this magnitude.

SimCYP simulation results points the lower exposure of CYP1A2 substrates in diabetic patients in comparison to healthy subjects. These effects potentially render a drug therapeutically ineffective in diabetic patients in case dose is based on standard pharmacokinetics in healthy subjects which is a usual clinical situation. This can lead to increase in the treatment cost especially with drugs with narrow safety margin. One of the possible explanations for lack of concluding clinical evidence for CYP1A2 activity in diabetic patients despite contradiction from clinical trials [24-26] is usually in clinical settings diminished activity or treatment failure is easily replaced by either increasing dose or by switching to another treatment alternatives. Whereas the situations of toxicities associated with increase in concentration are taken as a caution and steps to dose individualization are implicated if necessary. However therapeutic failure can cause extra treatment cost and failure of medical interventions when needed especially in emergency situations. Simulations with SimCYP by utilizing a validated PBPK model has an advantage to predict the clinical situations which are otherwise are overlooked due to cost and other reasons. This can also help to understand the underlying mechanisms and further may guide to design future studies [33].

This simulation studies purposefully overlooked the physiological changes in diabetic patient which may affect the disposition of drugs as reported by Dostalek et al. and further illustrated by Li et al. [34,35]. Physiological changes reported viz., changes in gastric emptying, rise in blood flow to adipose tissues are expected to have minimal effect on caffeine disposition due to its rapid absorption and less lipid solubility. Moreover, purpose of this study was to investigate the changes in CYP1A2 activity in NIDDM patients and to extend the results to other CYP1A2 substrates. Matzke et al. [25] reported a 42% raise in CYP1A2 activity in NIDDM patients and also reported the tendency of increased renal clearance of 4- hydroxyantipyrine, CYP1A2 mediated metabolite of antipyrine, however both the results fail to reach statistical significance. Further to support the results of the current study Urry et al. recently reported a case-control study illustrating enhancement in caffeine clearance in NIDDM patients in comparison to healthy controls [36].