Coronary artery disease (CAD) results from the thickening of the inner layer of arterial walls and accounts for more than 50% of all deaths. It is the number one cause of death of women. Part of the body’s cholesterol is derived from dietary intake, but majority is synthesized by the liver and other tissues [2]. Lipids have important roles in virtually all aspects of biological life – serving as hormone precursors, aiding digestion, providing energy storage and metabolic fuels, acting as functional and structural components in bio-membranes and forming insulation to allow nerve conduction or to prevent heat loss [3]. Menopause results from the loss of ovarian function, either naturally or surgically.

The female hormonal cycle is an exquisitely controlled system that includes the hypothalamus, pituitary, adrenal, thyroid and gonadal tissues; involving both positive and negative feed back loops [4]. At birth, every woman is endowed with one to two million primodial follicles which decrease to about 300,000 by the time of menarche (puberty) [5]. By age 51, the median age for the final menstrual period, the ovary reserve is about 1000 and this corresponds with a significant drop in estrogen production, typical when symptoms of menopause occur [4]. It is significant to note that while a woman may stop menstruating at this time, endogenous cycling and ovulation may still occur for months, even years [5]. About 20% of estrogenemic effects on arteries are mediated through changes in lipids and lipoproteins [6]. The association between hypercholesterolemia and atherosclerotic heart disease is an established fact and thrombosis produce occlusive vascular lesions in humans, which may lead to such adverse clinical conditions as stroke, myocardial infarction or peripheral vascular disease [7]. While similar mechanisms operate to induce cardiovascular disease in women and men, genderrelated differences exist in the anatomy and physiology of the myocardium, and sex hormones modify the course of the disease in women [8].

The hypo-estrogenic status that results from menopause leads to ovarian failure, resulting in a significant increase in total cholesterol and LDL-cholesterol, predisposing such women to the risk of coronary artery disease [9].

The subjects in this study were 200 apparently healthy volunteers of post-menopausal age status (aged between 50 and 69 years), drawn from Enugu metropolis. A total of 100 apparently healthy pre-menopausal women (aged between 35 and 49 years) served as control subjects for the study. Informed consent was duly obtained from each subject that participated in the study.

Subjects with a history of, or who were suffering from conditions which predisposes one to abnormal lipid profile, such as diabetes mellitus, hypercholesterolaemia and hyperlipidaemia, were excluded from the study.

Fasting whole blood samples {3.0 ml each} were collected from subjects while in the sitting position, by clean venepuncture from the antecubital vein. The samples were collected under asceptic conditions while avoiding haemolysis and dispensed into sterile plain tubes and allowed to clot. The clotted samples were centrifuged at 3000 rpm for five minutes and the separated clear serum supernatants were transferred into sterile tubes. These freshly drawn serum supernatants were used for total cholesterol, triglycerides and HDL-cholesterol assays. The sera were stored frozen and the analysis was carried out within one week. 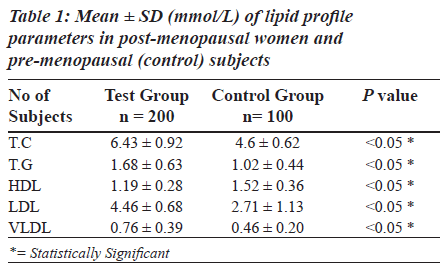 The study is focused on the effect of age, early and late menopause on the lipid profile of postmenopausal women. The results obtained in the two age groups pf postmenopausal women show elevated TC, TG, LDL, VLDL and reduced HDL level (P less than 0.05), which could be attributed to gradual cessation in the synthesis of reproductive hormones due to the transition into menopause. This consequently leads to the accumulation of cholesterol in the blood. This finding agrees with an earlier study by [1].

Although the two groups of post-menopausal women showed elevated levels of lipids and lipoproteins, there was significantly higher levels among the late menopausal women (P less than 0.05), which might be linked to a total loss of estrogen production. This finding supports the work of [5], which stated that while a woman may stop menstruating at the onset of menopause, endogenous cycling may still occur for months or even years (as seen in the early menopausal age). The control subjects however showed a normal pattern of lipid profile which can be attributed to the continual metabolism of cholesterol, via the synthesis of hormones such as estrogens, which regulate the female menstrual cycle.

The study shows an association between early and late menopause and lipid profile of post-menopausal women; and also provides an explanation for the higher prevalence of hyperlipidemia and increased risk of atherosclerosis as observed in the late menopausal women.

The study shows that there is a probability that concentration of the lipid profile parameters in post-menopausal subjects might depend on menopausal age.

It also reveals possible predisposition to unfavorable lipid profile and risk of coronary heart disease with progress from early to late menopausal age. It is therefore recommended that post-menopausal women should always be screened for hyperlipidaemia to reduce the prevalence of coronary artery disease (CAD).