Lifetime use of anticoagulants is unavoidable for patients who have undergone prosthetic mechanical mitral valve replacement [1,2]. In clinical practice, warfarin is the most commonly used oral anticoagulant. However, overanticoagulation still exists in the aspect of warfarin usage although International Normalized Ratio (INR) is being monitored [3,4]. Studies have shown that Asian patients with mechanical cardiac valves are more vulnerable to haemorrhage than thrombosis, which was opposite in patients from Europe and North America [5,6]. Therefore, we believe that a unified agreement or guideline particularly for anticoagulation treatment in Chinese population is desired and could be valuable in clinical practice although a number of guidelines for warfarin anticoagulation treatment for western countries patients have been published [7,8]. Thus, the purpose of the current study was to summarize our experience in a less intense oral warfarin anticoagulation therapy targeting low INR in Chinese population who had undergone mechanical mitral valve replacement, as well as to explore the suitable intensity of anticoagulation in this population.

The inclusion criteria included 1) Han patients born and mainly residing within the boundaries of Shandong, Hebei, and Henan Provinces 2) receiving medical mechanical valve 3) a past medical history without active rheumatism, bleeding events or haemorrhagic diseases before surgery, 4) normal liver and kidney function and 5) normal clotting time. The exclusion criteria included 1) those who received a Beijing GK or Medtronic unicuspid valve, 2) those who underwent AVR or TVR, 3) those with poor compliance, 4) those with cognitive disorder, mental, hearing or language disorders, and 5) those who declined to participate at any time during the study.

An initial dose of 2.5 mg/d warfarin was given 1 d after surgery in patients who did not have contraindication of anticoagulation treatment. The coagulation status of patients was monitored every day while hospitalized. The INR was used to monitor anticoagulation intensity, and served as the basis for the oral warfarin dose adjustment until the standard was met. The target INR of Mitral Valve Replacement (MVR) patients was 2.3 (ranging from 2.0-2.5). Patients who met anticoagulation standards had their INR followed-up twice per week for 2 weeks after being discharged from the hospital and followed by the recommended schedule as follows: once every other day × 3 (week 1) → twice per week × 4 (weeks 2 and 3) → once per week × 4 (weeks 4, 5, 6, and 7) → once every 2 weeks × 4 (week 8) → once per month for life. INR test was performed once every other day after each dose adjustment.

The complications related to anticoagulation after cardiac valve replacement were determined using the specific guideline by the American Association for Thoracic Surgery (AATS). In the absence of infection, thromboembolism after valve replacement included central and peripheral emboli. Anticoagulation-related haemorrhage included massive internal and external bleeding that resulted in death, hospitalization, permanent organ damage (such as anopia), or requiring blood transfusion. Cerebral haemorrhage included all intracranial haemorrhage confirmed by imaging examinations.

Patients were followed up on a regular basis according to the schedule mentioned in “anticoagulation treatment” section and the data were collected. Follow-up was carried out either over the telephone or by outpatient visit. Briefly, follow-ups of outpatient f of both local and out-of-town patients were carried out by their re-visit to our hospital or to other affiliated secondline hospital. For those were not able to conduct the follow-ups by revisiting hospital mentioned above, telephone call would be performed in this case.

SPSS16.0 was used in all statistical analysis in this study. Continuous parameters were presented as mean ± Standard Deviation (SD), and categorical data were shown in number and percentage (%).

Table 3: Warfarin doses, INR values, and complication rate of patients with and without atrial fibrillation. 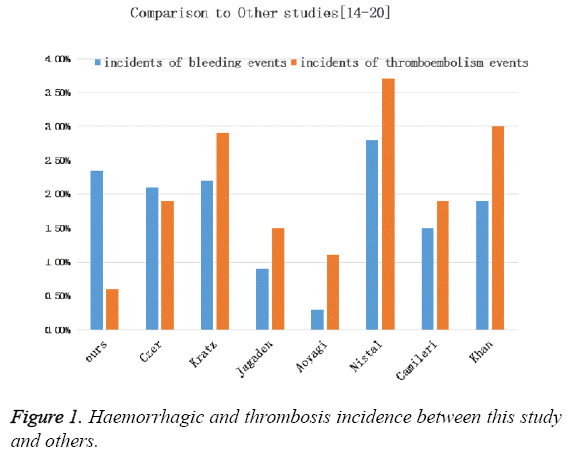 Figure 1: Haemorrhagic and thrombosis incidence between this study and others.

Prosthetic cardiac valve replacement is the one of the most preferred approaches to treat severe valvular heart disease. However, histological difference does exist between prosthetic cardiac valves and normal human valves. A prosthetic mechanical cardiac valve is not covered with endothelial cells, the most important cellular type in activating coagulation cascade and inducing thrombi formation on the prosthetic valve. Such process could largely affect the opening and closing of valve leaflets, and thus resulting in valve dysfunction. Once the severe thrombosis took place, the thrombi would completely block the opening of the valve orifice such that it ultimately led to heart failure or even sudden death. Thus, patients with prosthetic cardiac valve replacement should receive anticoagulation treatment. Although new anticoagulation medicines including Factor X (rivaroxaban and apixaban) and thrombin inhibitors have become used in clinics recently, the indications for these new anticoagulants were limited to hip and knee joint replacement. Thus, the traditionally used anticoagulant warfarin is currently the only effective medication for patients with prosthetic cardiac valve replacement supported by large scale clinical studies. However, despite of the fact that warfarin is inexpensive and commonly used oral anticoagulant in clinical practice, it has a relatively narrow safety range because its therapeutic dose is close to the toxic dose and large individualto- individual dose effect difference exists. Therefore, carelessness in monitoring the dose and INR level may result in complications [2,9] such as haemorrhage due to overanticoagulation or thromboembolism due to underanticoagulation [1,10,11]. The dose of warfarin had been adjusted by monitoring its influence on the extrinsic coagulation system (Prothrombin Time (PT)) after oral administration. However, the PT values determined in different laboratories using different reagents are not comparable with each other. Hence, the INR is currently used as the monitoring index as a more accurate parameter in reflecting the anticoagulation treatment intensity. The safety and effectiveness of warfarin treatment mainly relies on whether or not INR is maintained within the safe and effective therapeutic range. Therefore, the anticoagulation intensity of the optimum efficacy and the lowest risk needs to be identified. In terms of the optimum anticoagulation treatment intensity standard, the guidelines from the European Society of Cardiology (ESC) recommend that the anticoagulation intensity should be proportional to the degree of thromboembolic risk. The recommended INR of first-generation valves is 3.0-4.5, 3.0-3.5 for second-generation valves and mitral valves, and 2.5-3.0 for aortic valve. According to the guidelines from the American College of Chest Physicians (ACCP) published in 2008, the INR value should be maintained between 2.5 and 3.5 for most mechanical valves and 2.0-3.0 for low-risk patients with a bioprosthetic or aortic mechanical valve [12].

Due to the diversity of ethnicities, regions, and dietary habits, coagulation function varies between different populations. Therefore, optimized anticoagulation treatment practices in western countries should simply apply to Chinese population with caution. It was reported that coagulation time of the Asian ethnics is slower than patients from western countries, and thus, Asians are more vulnerable to haemorrhage [13]. Some clinical studies have proposed that low intensity anticoagulation treatment should be used for Chinese patients who have undergone cardiac valve replacement (i.e., the INR should be maintained between 1.5 and 2.0). The optimum value for the upper limit of the INR should be 2.5 for Chinese patients treated with warfarin, and the highest threshold should be 3.0 according to the research from Chinese populations. According to the study conducted by Liu et al. from Beijing Anzhen Hospital, warfarin anticoagulation treatment after prosthetic mechanical cardiac valve replacement with an INR maintained between 1.3 and 2.3 could achieve satisfactory prevention of thromboembolism and reduce the incidence of haemorrhagic complications related to anticoagulation [14-16]. The study conducted by Liu et al. [17] from Guangdong Provincial Cardiovascular Institute in 2010 also showed that the incidence of thromboembolic complications and severe haemorrhage events were similar between low intensity anticoagulation therapy which controls the INR between 1.5-2.0 and standard intensity anticoagulation therapy which controls INR between 2.5-3.5.

Among the patients included in this study, 10 cases of cerebral embolism were diagnosed during the follow-up and the incidence was as low as 0.60% patient-years which could possibly due to the insufficient post-operative anticoagulation intensity, the left atrial thrombosis due to atrial fibrillation or a relatively low trans-mitral blood flow velocity after MVR. Among the included patients, haemorrhage secondary to anticoagulation was observed in 39 cases, and the incidence of severe haemorrhagic complications in patients with long-term post-operative anticoagulation treatment was 2.34% patientyears possibly due to the relatively low intensity of anticoagulation treatment in this study, the lack of imaging methodology to confirm haemorrhage other than intracranial haemorrhage based on AATS guideline or low compliance of patients. Thus, the follow-up rate in the current study was 94.08%, which may have affected the overall incidence of haemorrhage.

There are several limitations in this study. First, this study is a single center study with a relatively small size of the samples and the short follow-up period. Therefore the findings from this study need to be further confirmed by large-scale multicenter clinical studies. Secondly, for the same reason, whether or not the target INR needs to be adjusted to an even lower level to reduce the incidence of haemorrhage also needs to be determined through long-term follow-up with larger samples. Third, we were not able to analyse the survival outcome or report Kaplan-Meier curves in this study due to a relatively shorter period of follow-up. We are planning a longer period of follow-up study to overcome the limitation of this study.

No conflict of interest associated with this work.