Purpose: To analyze and conclude the medication characteristics and regularities of TCM (Traditional Chinese Medicine) therapy for lung cancer based on data mining technology.

Method: The Chinese biomedical literature database was used as a channel for literature retrieval, the key words such as lung cancer were first input and then relevant literatures that could be incorporated into the standard were retrieved through the text data mining method. In addition, the main characteristics and relevant regularities of TCM therapy for treating lung cancer were observed and analyzed in aspects of traditional Chinese medicine, Western medicine, Chinese patent medicine and combination drug therapy.

Result: 6,421 relevant literatures were obtained through data mining in total. According to the analysis of all the literatures relevant to lung cancer, the main objective of TCM therapy is to tonify qi & yin and strengthen the body resistance with Astragalus mongholicus and ginseng as the most common traditional Chinese medicinal materials. Meanwhile, salviae miltiorrhizae and coix seeds were widely applied in the treatment to remove pathogenic factors and promote blood circulation. Moreover, the poisonous TCM was also added to resolve toxin and dissipate binds during the therapy. Among many Chinese patent medicines, compound Kushen injection, Aidi injection, Pingxiao capsule and Shenmai injection were generally used through the compatibility prescriptions to significantly improve the curative effects, reduce toxicity and support body resistance. Good curative effects were achieved and the incidence rate of adverse reactions were reduced by combining Western medicine with Chinese patent medicine in the treatment of lung cancer, wherein cis-platinum and Aidi injection were the most effective methods.

Conclusion: The principle of “supporting the health energy and eliminating pathogenic factors” is adopted when TCM is used for lung cancer therapy. The kind of therapy could improve the curative effects and help the patients get relatively ideal living quality. The application of text data mining technology could help to grasp the relevant characteristics and regularities of TCM therapy for treating lung cancer, thus providing guidance and reference for the scientific, reasonable and normalized clinical medication.

Generally, most lung cancers first come on the bronchiolar mucosa epithelium, so they are also called the lung bronchogenic carcinoma. There are basically two types of lung cancers: namely small cell lung cancer and non-small cell lung cancer. No definite standard has been identified for the pathogenesis of lung cancers so far (Figure 1), but lung cancers are generally thought to be linked with the following dangerous factors such as smoking, asbestos, ionizing radiation and polycyclic aromatic compounds etc. [1]. Relatively more extra-pulmonary symptoms (Figure 2) are found in the earlystage lung cancers such as osteoarticular symptoms, shoulder & back pain as well as hoarseness. Meanwhile, the periosteal proliferation can be observed through the X-ray examination. The main physical signs of lung cancers are manifested as follows: local wheezing sound, SVCS (superior vein cave syndrome), phrenic nerve paralysis, pericardium invasion, pleural metastasis as well as baryodynia in shoulder and arms (Figure 3). 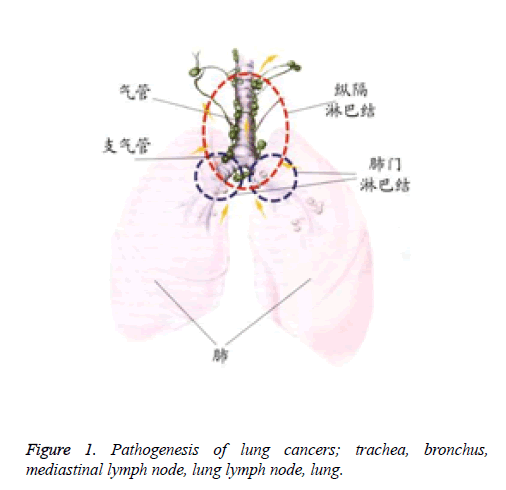 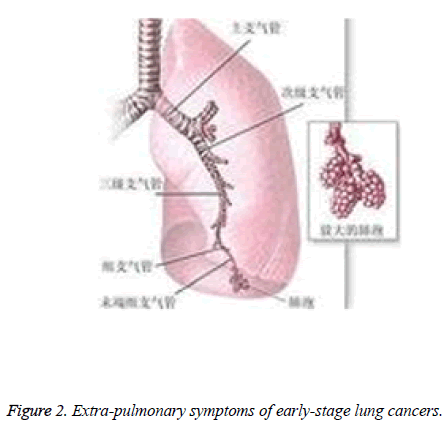 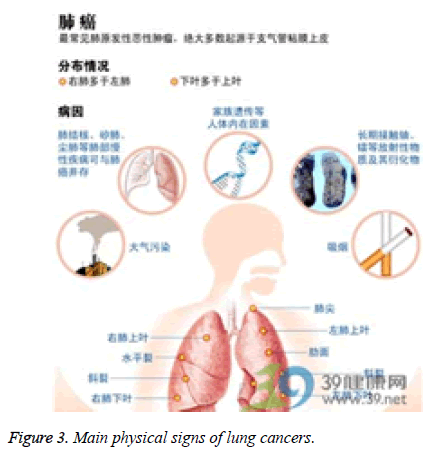 The clinical manifestations of lung cancers are as follows: obvious cachexia symptoms including irritable cough, blood-stained sputum, chest distress & pain, anhelation as well as fever which are found among the patients in the advanced stage (Figure 4). According to the prediction of WTO, the number of newly added lung cancer cases will have reached up to 1 million in China by 2025, making China become a country with the most lung cancer patients [2]. Therefore, it has become an urgent research subject to effectively increase the cure rate of lung cancers and improve the survival quality by alleviating the clinical symptoms of the patients. When the TCM therapy method is used for treating lung cancers, great advantages of diagnosis and treatment based on an overall analysis of the illness and the patient's conditions as well as the holism concept get fully displayed according to the development trends and complexity of the illness. With the text data mining technology as the method, the study is intended to explore the medication characteristics and Regularities of TCM therapy for lung cancers through a thorough analysis of the literatures relevant to lung cancers. The details of reports are as follows. 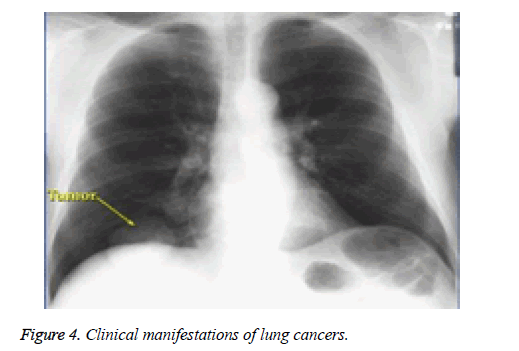 With the data mining technology as the method, the meaningful data were selected from the non-structural text data. Firstly, the text data were collected. Log in Chinese biomedical literature database and input the keyword “lung cancer” in the retrieval column. Upon retrieval, 6,421 relevant literatures were obtained with the time ranging from January 2010 to June 2016. Secondly, the text data were processed. ANSI coded format was used to save the collected data with the text extraction tool for information extraction from the nonstructural TXT text data obtained by the inner downloading. Meanwhile, the format processing was in the form suitable for formative databases and large databases.

The data were unfolded and extracted with SQL lead-in and the implementation of mining analysis [3]. Again, the data cleaning was unfolded. Specifically, the table name was set as Table_Initial, processing serial number and machine-standard keywords. In the period, only one calculation was made for repeated keywords. The data cleaning was conducted in this form [4]. Next, the data mining and analysis were conducted. Relevant keywords usually have common occurrence, so data mining and procedure construction are required. On the one hand, for common keywords available in each literature, the DN_pairs data sheet was obtained through the data hierarchy algorithm based on the frequency statistics of sensitive keywords. On the other hand, the same keyword pairs were merged and the frequency was reserved to obtain the DN_pairs_frqcy data sheet. In the data sheet, the generated keyword pair has only one occurrence and one corresponding frequency [5,6]. Finally, the data cleaning was done for the second time. The rules are constructed for the second-time data cleaning according to the analysis because the natural languages are expressed in a diversified manner and the diversification of duality generates “noise”. In addition, with the DN_pairs_frqcy data sheet obtained in the first-time data cleaning as the basis, keyword pairs of different frequencies were extracted and the visualized processing of the data were unfolded through Cytoscape 2.7 [7].

According to the mining result, there are 236 types of single Chinese herbs used for lung cancer therapy. In terms of the occurrence frequency, the top ten Chinese herbs are as follows in order: ginseng, Astragalus membranaceus, folium artemisiae argyi, asparagus fern, sophora flavescens, coix seeds, radix ophiopogonis, brucea javanica, Oldenlandia diffusa and salviae miltiorrhizae. The details are shown in Table 1 as follows.

In performing the lung cancer therapy, the advantages of TCM are: tonifying spleen and lung, nourishing qi and yin as well as supporting the health energy. Meanwhile, Chinese herbal medicine has the functions of heat-clearing and detoxifying, promoting blood circulation, supporting the body resistance as well as removing pathogenic factors. Ginseng and Astragalus membranaceus are two kinds of most widely used herbal medicines that tonify qi. TCM cool in nature (yin type) can purge pathogenic fire and clear heat, so it can be used for treating the heat syndromes; while TCM (yang type) can eliminate pathogenic cold and warm the body, so it can be used for treating the cold syndromes. The sweetness, bitterness and pungency of TCM are commonly used to eliminate pathogenic evils and warm spleen & stomach in the lung cancer therapy, further strengthening the health energy [8].

According to the compatibility characteristics of Chinese patent medicine, the research data show that Aidi injection, compound Kushen injection and Shenmai injection are most widely used and that Aidi injection is obviously higher than other injections in application frequency. The medicine compatibility includes Astragalus membranaceus, ginseng and Acathopanax senticosus that tonify qi and yin as well as cantharides that remove stasis and diseases. Ginseng is the most widely used one in the composition of commonly used Chinese patent medicines because ginseng polysaccharide, multiple saponin and ginseng volatile oil are proved to be antineoplastic and regulate immunities in the modern pharmacology [9]. The poisonous components of the Chinese patent medicines include cantharides, saltpeter, alum, dried lacquer, semen strychni as well as brucea javanica in the lung cancer therapy. The main effects are detoxifying, stasis-removing and detumescence. Modern pharmacology proves these medicines to be antineoplastic.

According to the Regularity analysis in applying the compatibility of Chinese patent medicine and Western medicine for lung cancer therapy, periodization, small cell type or non-small cell type is used as the basis of choosing the therapeutic methods when Western medicine is applied in the lung cancer therapy. The research results show that: cisplatinum, the most commonly used medicine, has the advantages of wide antineoplastic spectrums and hypoxic cell inhibition. The combination of Aidi injection and cis-platinum is the most widely used in the compatibility of Chinese patent medicine and Western medicine because it has the effects of immunological enhancement, anti-tumor as well as toxic and side effect reduction. Meanwhile, the chemotherapy regimens of Aidi injection and cis-platinum can obviously improve nausea & vomiting, reduce gastrointestinal reactions and enhance immunity, thus improving the living quality of the patients [10].

In conclusion, the principles of “supporting the health energy and eliminating pathogenic factors” are adopted to improve the survival quality of the patients when TCM is used for lung cancer therapy. With the data mining technology as the method, the paper explores the medication characteristics and relevant regularities of TCM used for lung cancer therapy. These summarized characteristics and regularities could provide normative guidance for clinical medication, so they are worth the applied exploration.