MCT1 polymorphism among Egyptian children and adolescents as a useful predictor for physical fitness and muscle fatigue.

Background and objectives: Monocarboxylate transporter1 (MCT1) is a protein that mediates transport of pyruvate and lactate across cell membranes, its gene contains several polymorphisms (SNPs). We aimed to genotype SNP A1470T and to study its impact on muscle activity. Materials and Methods: 108 male children and adolescents were enrolled; 56 patients (easily fatigable after 30 minutes football training) and 52 normal individuals who completed the training protocol without complaint. Both groups were subjected to clinical examination and blood lactate and LDH assay. DNA samples were withdrawn for MCT1genotyping using high resolution melt technique. Results: Overall frequency of TT genotype was highest (44.5%) followed by AT and wild AA genotypes. Genotype AA was significantly lower in patients (OR 1.97) with a statistically higher frequency of allele A among control (56 versus 28 with P<0.001). Significantly higher blood lactate was found in patients. Alleles A and T were in equilibrium among control (56 versus 48, respectively) with marked disequilibrium in patients. Interpretation and conclusions: Allele A was favorable for MCT1 function, lactate transport and hence physical fitness. Within patients' groups, AA was not better than AT or TT thus suggesting potential role of training or epigenetic factors in improving allele a expression.

Type II diabetes (T2D) is a chronic disorder that constitutes about 90–95% of diabetes mellitus (DM). It is a heterogeneous group of metabolic disorders characterized by an elevated blood glucose level. Type II diabetes [1] is recognized as one of the dominant executors of disability and casualty in the modern world. T2D is characterized by preliminary loss of cells' insulinsensitivity or a complementary deficiency in insulin secretion or both [2], resulting from the combination of both environmental factors and genetic composition [3].

Current therapeutic compounds used to sensitize cells to insulin, majorly the Thiazolidinediones, which when bind to PPARγ activate the transcription of genes (e.g., adipocyte fatty acid-binding protein, lipoprotein lipase, and phosphoenol pyruvate carboxykinase in adipose tissue) involved in glucose metabolism and maturation of adipocytes, and the up-regulation of acyl-Co synthetase, fatty acid transporters, and uncoupling protein-2 are recently reported to exacerbate other life-threatening side effects which lead to their limited usage [8,9]. Hence, the need for alternative therapeutic agents with little or no side effects [10].

In the present study, Seventy (70) phytoligands (phytochemicals) characterized from Stevia rebaudiana and obtained from literatures were screened for their agonistic effects on peroxisome proliferator-activated receptor (PPARγ) belonging to the nuclear receptor family. Stevia rebaudian is a perennial shrub of the family Asteraceae. This plant is reported to produce a diverse range of bioactive molecules that possess antibacterial, antifungal, antiprotozoal, and anti-diabetic properties [11]. The drug likeness of the lead phytochemical compounds were determine through the calculation of their molecular properties; calculated logP, polar surface area, number of hydrogen bond donor, number of hydrogen bond acceptors and molecular weight (Lipinski's rule) [12].

The Crystal structure of the ligand-binding domain of the human PPAR-gamma in complex with an agonist with crystallographic resolution of 2.07Aº with PDB ID: 2F4D was downloaded from the protein data bank (http://www.rcsb.org). PyMOL plugin in Autodock/Vina was employed to extract the receptor. The SWISS-MODEL software was used to rebuild the missing residues and atoms of the human PPAR-gamma.

The docking results were validated with the blasting of the fasta sequences of the crystal structure of the ligand-binding domain of the human PPAR-gamma (ID: 2F4D), obtained from the protein data bank unto the online available ChEMBL Database (www.ebi.ac.uk/chembl/). The bioactivity generated by the database, having an identity of 100%, EC50 value of 2599, and KI value of 312, was downloaded in txt format. The bioactivity was sorted out; missing or misplaced data were removed. Only 88 of the total 2599 drug-like compounds were recovered. The compiled compounds were split and converted to 2D (in sdf format) by Data Warrior software (version 2), converted to pdb format by Open Babel, and finally to pdbqt. The ligands were docked into the binding domain of PPARγ (as indicated by the config file). The config file indicated the grid map of the active site of PPAR-gamma generated by AudoDock Vina. A correlation coefficient graph was plotted between the docking scores of the 88 compounds generated and their corresponding pIC50 (experimentally determined) values. Spearman Rank correlation co-efficient graph was plotted to obtain the correlation (R²) between the dockings results of the ChEMBl’s compounds and their corresponding experimentally generated results.

In the present study, virtual high throughput screening (vHTS) technique was employed to screen a pool of seventy (70) phytocompounds from Stevia rebaudiana plant for their PPARγ agonistic properties. Austroinulin was discovered as the lead compound with the binding energy of -8.1 kcal/mol (appendix). The drug-likeness of austroinulin was confirmed by subjecting it to the Lipinski’s rule of five, interestingly the lead compound, austroinulin violated none of the rules and with three (3) number of rotatable bonds, it possesses good bioavailability (number of rotatable bonds influences the bioavailability and the binding potency) (Tables 1 and 2).

Table 2: Lipinski's drug-like properties of austroinulin: The rule describes drug candidate’s pharmacokinetics in the human body which also including their absorption, distribution, metabolism, and excretion (“ADME”). Austroinulin, violated none of the rules. This table was generated using the ChemAxon suite.

We validated the accuracy of our docking protocol by redocking the co-crystallized ligand (Indol-1-yl Acetic acid) back into the binding pocket of the PPARγ (2F4B1) [17], (Figure 1). As revealed above, the re-docked pose overlapped almost totally with the experimental orientation, indicating that autodock vina with a very high accuracy re-docked the co-crystallized Indol- 1-yl Acetic acid back into the binding pocket of the PPARγ, this implies that our docking methodology was reliable and the docking scores obtained are correct. The accuracy of our docking scores was further validated using the online available ChEMBL Database, the Fasta sequence of the crystal structure of the Human PPAR-gamma (ID: 2F4B) was blasted on www. ebi.ac.uk/chembl/. The compounds obtained were docked into the ligand-binding domain of the Human PPAR-gamma, a correlation coefficient graph plotted between the docking scores of the compounds generated and their corresponding ChEMBL’s Pchem values (experimentally determined IC 50), Figure 2. The strong correlation coefficient between the docking scores and the experimentally derived data in the present study, lend credence to the fact that computational experiment can replicate experimental data at least in this present study and that our docking scores (appendix) using AutoDock Vina algorithm is dependable (Figure 3).

Figure 2: Validation of docking: Comparability of the re-docked binding mode (red) and the co-crystallized pose (blue) of Indol-1-yl Acetic acid with the accompany residues of PPAR-gamma binding pocket.

Table 3: Showing the docking scores of the six (6) lead phytochemicals from Stevia rebaudiana. 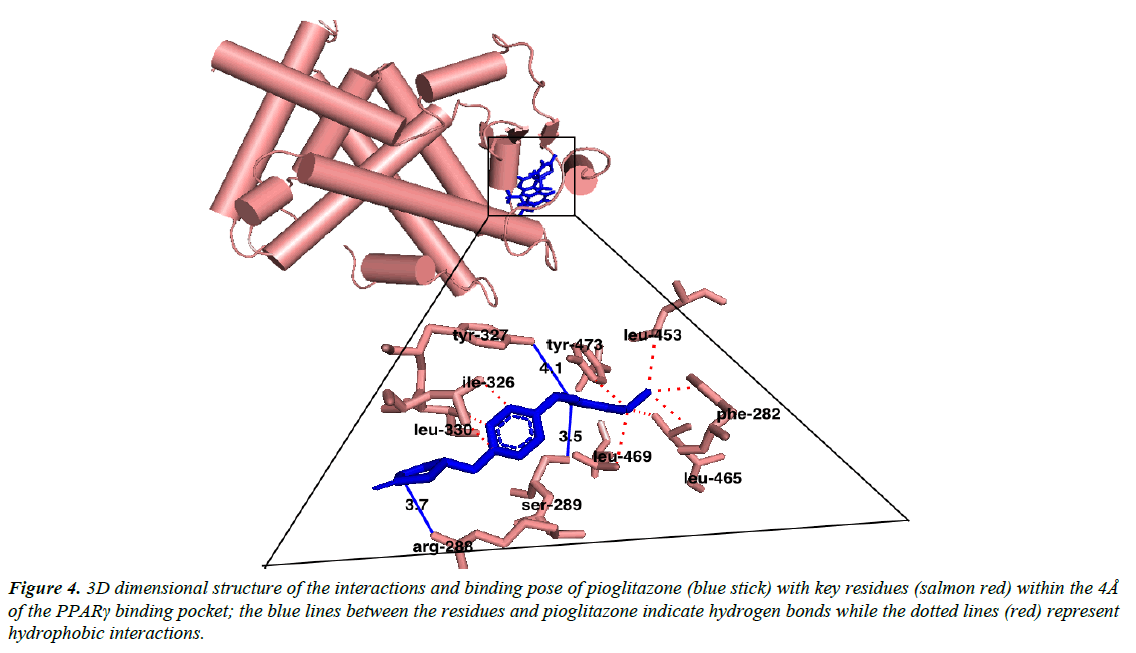 Figure 4: 3D dimensional structure of the interactions and binding pose of pioglitazone (blue stick) with key residues (salmon red) within the 4Å of the PPARγ binding pocket; the blue lines between the residues and pioglitazone indicate hydrogen bonds while the dotted lines (red) represent hydrophobic interactions. 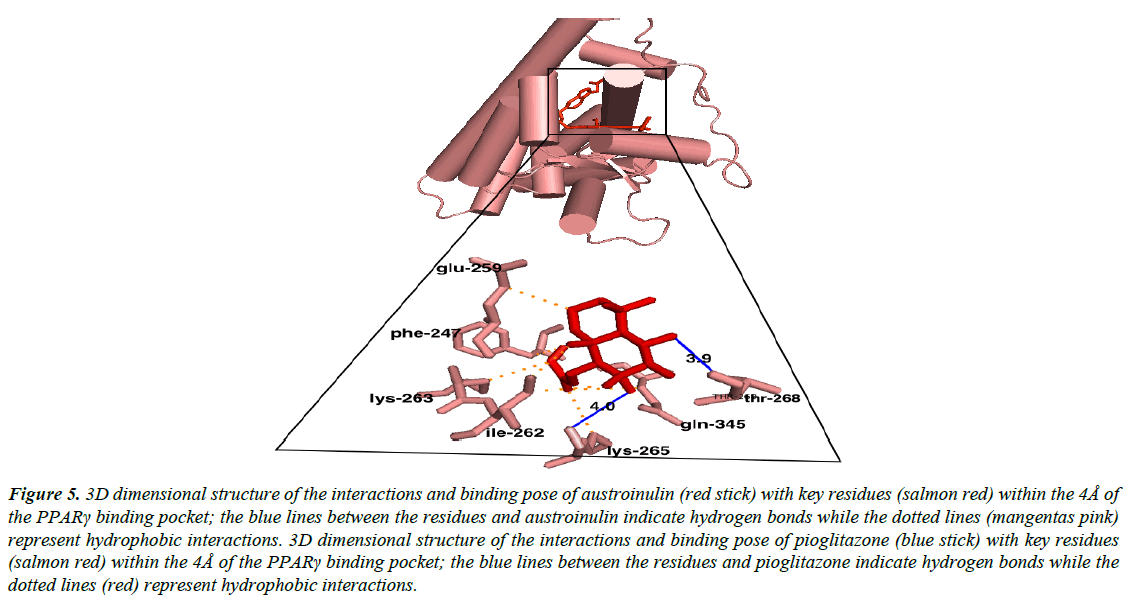 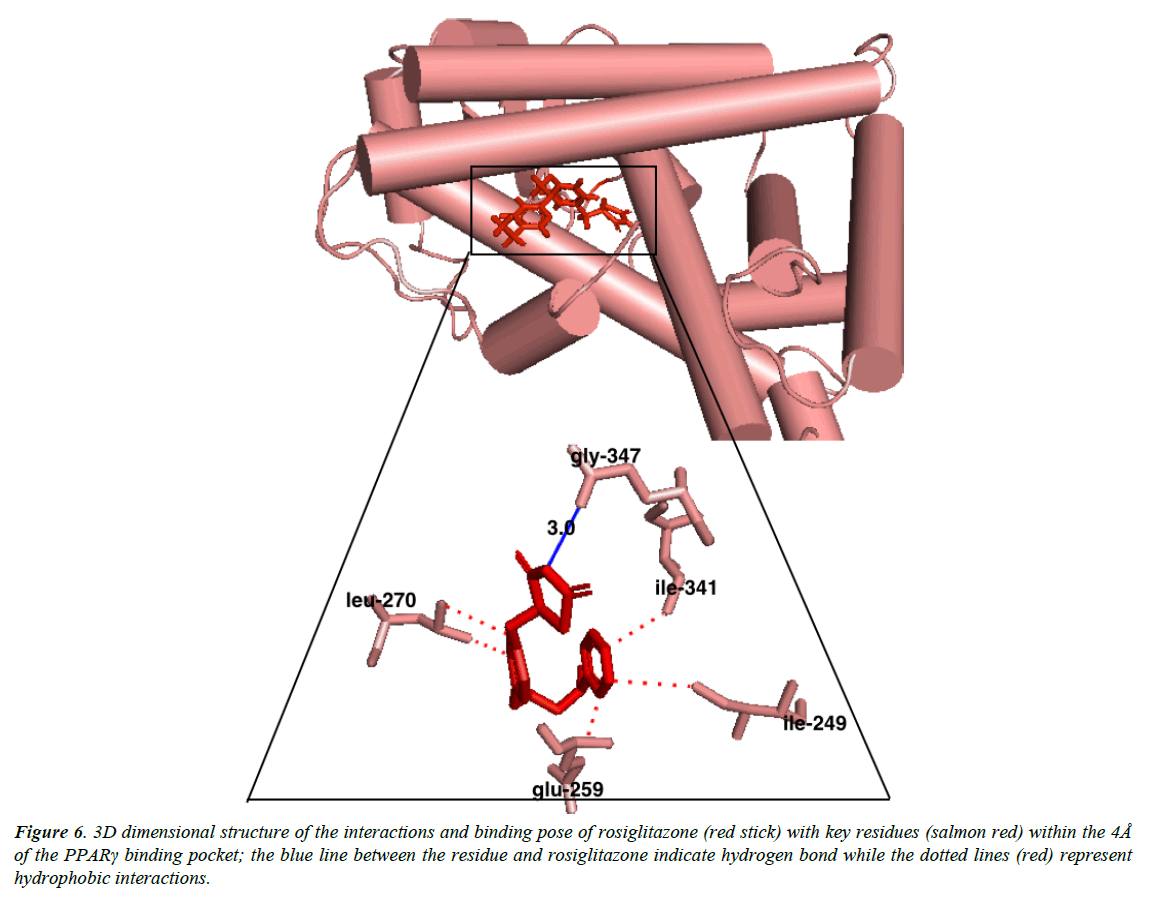 Figure 6: 3D dimensional structure of the interactions and binding pose of rosiglitazone (red stick) with key residues (salmon red) within the 4Å of the PPARγ binding pocket; the blue line between the residue and rosiglitazone indicate hydrogen bond while the dotted lines (red) represent hydrophobic interactions.

Natural PPARγ agonists have different binding modes (Figure 7) when compared with the thiazolidinedione agonists, and these may be associated with the reduced side effects of natural agonists of PPARγ (Wang et al., 2014).

Figure 7: Binding mode (Orientations) of austroinulin (red stick), pioglitazone (yellow stick) and rosiglitazone (green) within the PPARγ binding pocket. Natural PPARγ ligands have been reported to have different binding modes to the receptor in comparison to the full thiazolidinedione agonists, as shown above.

There have been few or little reports in the literatures, on the active constituents of numerous medicinal plants extracts indicated to be activators of the PPARγ. Austoinulin from Stevia rebaudiana, bear a good potential as a possible agonist of the PPARγ, hence, it needs to be further investigated both in-vitro and in-vivo. 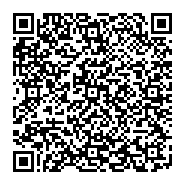