Chhabra S* and Singh A

Background: Hypertensive disorders of pregnancy (HDsP) are being divided into early onset (EO), late onset (LO) disorders, depending upon gestation at diagnosis, because of differences in causes, pathology, outcome and sequale. It seems EO HDsP cause much more morbidity in the mother. Objective: To know differences in maternal morbidity EO HDsP compared to late onset disorders. Material Method: Study was done to know complications in cases of 1046 cases of EO LO HDsP, managed over 2 years, 11.73% of 8920 births during the study period. EO cases were (Category A)-20 to <28 weeks, (B) ? 28-<34 weeks and LO, (C) ? 34-<37 weeks, (D) ? 37 weeks. Results: Significantly more women with EO HDsP were primigravida of younger age. Significantly more women with very EO HDsP (Category A) had liver dysfunction compared to Category B, C, D, 85% had mild preeclampsia, 60% severe in A, 32% mild PE 27% severe PE, in LO cases, 9.58% mild PE, 50% severe PE in C, 19.56% mild PE in D, 44.11% severe PE. HELLP (Hemolysis, Elevated Liver enzymes and Low Platelet count) as well as renal failure were also more often diagnosed in EO cases. In LO no patient had grade III hypertensive retinopathy. Placental abruption occurred in 25% A, 14.66% B, 3.79% C, 2.67% D. There was no maternal death with individualized management. Conclusion: Younger women had EO disorders which were more often severe. There were more chances of multiorgan disorders in women with EO disorders compared to LO.

Hypertensive disorders of pregnancy (HDsP), a group of multiorgan disorders that significantly contribute to maternal, fetal/ neonatal morbidity and mortality are the second most common cause of maternal deaths worldwide [1-11]. Berg and colleagues reported that 16% of 3201 maternal deaths due to complications of HDsP between 1991 to 1997 in the United States also [12]. Smith et al. reported that preeclampsia complicated 3-8% of pregnancies in Western countries, and was a significant cause of maternal deaths, causing 10-15% of maternal deaths [13]. However some mothers with HDsP did well, others suffered a lot and this seemed to be dependent on the gestation at which disorder occurred [14]. For better understanding of the causes, course, and outcome, disorders are being divided as early onset (EO) and late onset (LO) disorders, depending upon gestation at which they are diagnosed. EO and LO HDsP are believed to be different disease entities with overlapping clinical signs [11,15- 18]. HDsP lead to many problems in the mother and baby, more so EO with commonalities but a lot is still not known. In resource poor settings the problems are more because of delay in diagnosis and delay in the appropriate management and research continues.

Present study of women diagnosed with HDsP before 34 weeks (early) and after 34 weeks (late) was done to know differences in the demography, maternal morbidity, mortality in EO and LO HDsP.

Prospective study was carried out over 2 years in Obstetrics Gynaecology with the help of Biochemistry at a rural referral hospital after approval of the institute’s ethics committee and consent was taken from the study subjects. Study subjects were pregnant women or women in labour beyond 20 weeks with singleton pregnancy hypertension, with gestational hypertension (GH)/preeclampsia/eclampsia. Women, with pre-pregnancy hypertension diabetes/renal, liver disease, or other medical disorders, past or current smokers, not planning to deliver at the place of study were excluded. Investigations, including coagulation, liver, renal function and Doppler studies were done as was the practice. Women were divided in two major groups 20 weeks to less than 34 weeks (EO HDP) and 34 weeks onwards (LO HDsP). For better information, EO were further divided into group A, ≥ 20 to<28, B ≥ 28 to<34 and LO into C, ≥ 34 to<37 and D, ≥ 37. Information was collected with the help of a predesigned tool. Analysis was done for differences in complications in the mothers. 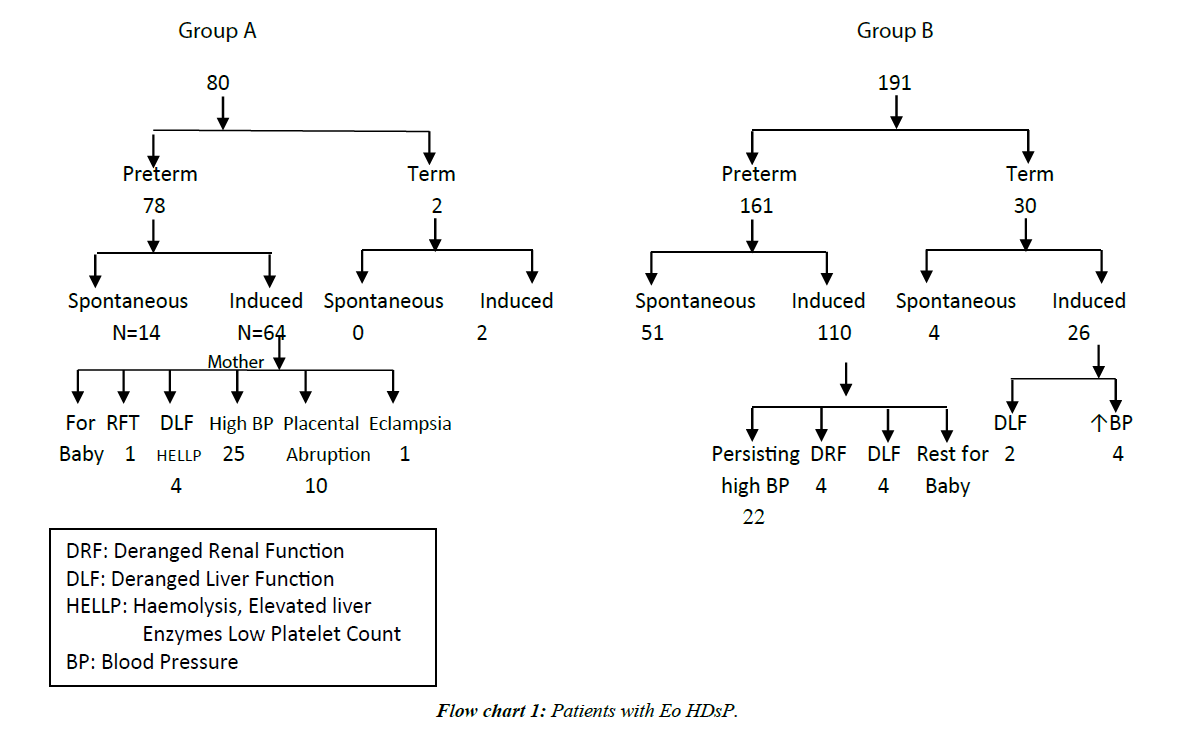 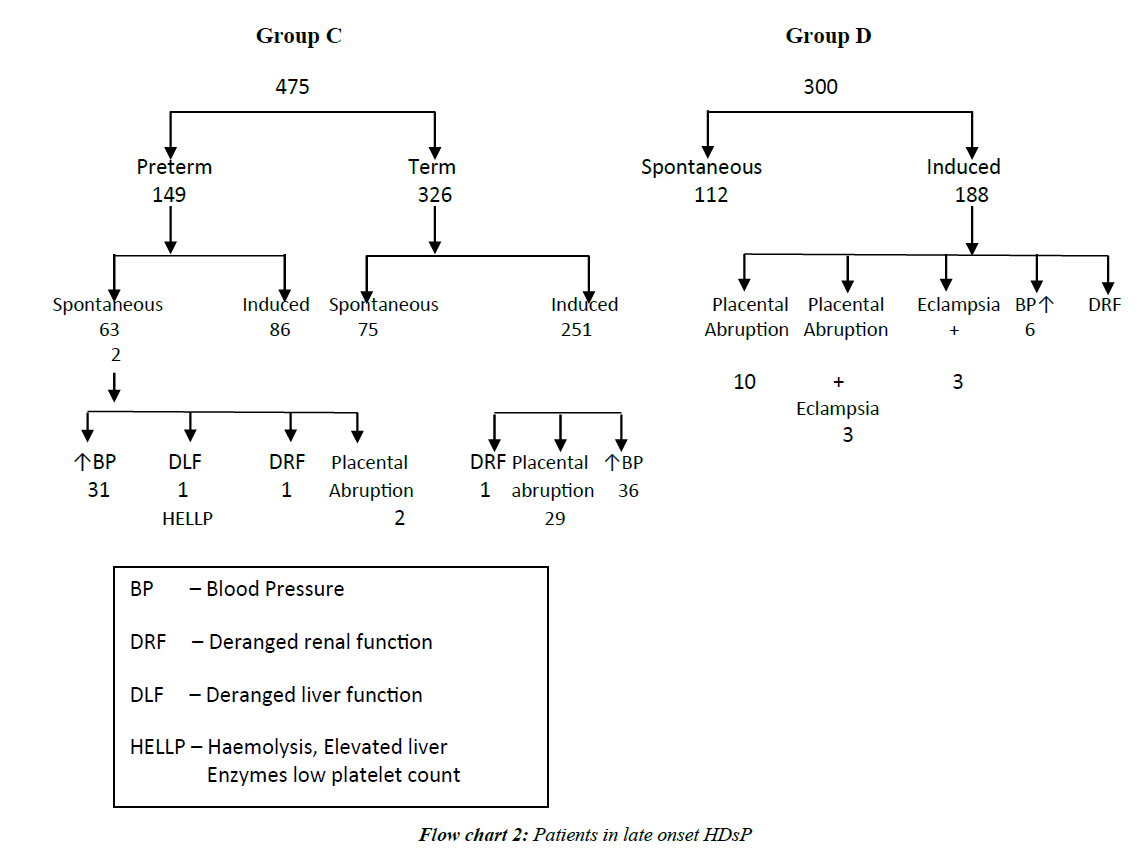 Table 3: Maternal morbidity during pregnancy, labour and post-partum In EO and LO HDsP.

There was no maternal death. No woman developed pulmonary or laryngeal edema or cerebral haemorrhage, but 1.25% cases of preeclampsia in Category A, 3.14% of Category B, developed eclampsia after admission. Only 2.5% (2 of 80) patients of A could reach term gestation.

The concept of EO and LO HDsP is recent, and it is being widely accepted that these are two entities. They have different etiologies and should be regarded as different forms of the disease [19-22]. The EO HDsP comprises a small subset of all cases of HDsP (5 to 20%), but is the most dangerous. Earlier Sibai et al. reported a gradual increase in the cases of HDsP with increasing gestation, 32% of all in the second trimester, 32% between 28 to 36 weeks, and 36% between 37 to 40 weeks [23]. Meis et al. reported 15.3% incidence of second trimester HDsP [24], Shenhav et al. and Onah et al. have reported incidence of 24.51% and 23.4%, respectively [25,26]. Similarly Yang et al. reported a gradual increase in incidence with gestation, 9.40% of all cases before 28 weeks, 19.61% between 28-31 weeks of gestation, 13.33% at 32-33 gestational weeks, and 57.66% with onset ≥ or =34 weeks of gestation [19]. Banhidy et al. reported that of 1017 patients of HDsP, 3.9% had developed hypertensive disorder in the 4th month of pregnancy 26.8% in 8th month and 24.7% in 9th month of pregnancy [27]. However if the high blood pressure is detected prior to 20 weeks, it is considered essential hypertension rather than HDsP. Lisonkova et al. reported increased incidence with increasing gestation; EO and LO preeclampsia rates 0.38% and 2.72% respectively [28]. In the present study of 8920 births, HDsP were, 0.89% in second trimester cases, 2.14% between ≥ 28 to <34 weeks, 5.33% of ≥ 34 to <37 weeks and 3.37% at term gestation. Ebeigbe et al. reported EO HDsP contributed to 6.3% of all cases of HDsP and most women presented between 28-32 weeks gestation (78.3%). The disease was severe at presentation or rapidly progressive in 39 cases (84.8%), leading to delivery within 72 hours of presentation. Most of the cases were delivered by CS (58.7%) [29]. the researchers concluded that most of EO cases were associated with significantly higher risk of obstetric interventions. However, Kenneth et al. reported that LO HDsP also presented in severe disorder [30]. In a retrospective study of 264 singleton pregnancies with LO disease, researchers reported that 57.6% were severe, with median gestational age at diagnosis 37 (34-43) weeks, 30.7% of patients experienced ≥ 1 major maternal complications and also 34 (12.9%) had eclampsia and concluded that LO HDP were not innocuous condition.

In a study by Ebeigbe et al. the EO disease was severe at presentation or rapidly progressive in 84.8% cases as were the cases of EO disorder in the present study [29]. EO affects vital organs more often, more seriously than LO cases. Onah et al. reported 175 (23.4%) of the 749 cases of HDsP at less than 30 weeks gestational age (early) and the 574 were of 30 weeks onwards (late), with twofold increase in MMR and a significantly increased incidence of renal failure and HELLP syndrome in EO cases [26]. The researchers concluded that at admission prediction of the clinical course of the disease and the development of additional maternal complications was not possible. In the present study maternal mortality could be prevented with individualized management, though more women did have placental abruption, renal, hepatic and coagulation dysfunction in EO cases. But no one developed pulmonary oedema or obvious cerebral haemorrhage.

Murphy et al. in their study reported that, of 21% preterm preeclampsia cases. Thirteen percentages had renal failure, and 15% had placental abruption [35]. The study revealed that a conservative approach to the management of EO preeclampsia resulted in good obstetric outcome for the majority of fetuses, but this needed to be balanced against the significant risk of increase in morbidity to the mothers. Jenkins et al. reported that in 39 women with severe preeclampsia in second trimester (<25 weeks), 54% experienced morbidity like placental abruptio, HELLP, renal insufficiency, and eclampsia [39]. An EO case has severe placental pathophysiology. Yeo reported that LO preeclampsia as an autonomic dysregulation is a new approach [40]. Unlike EO preeclampsia, which involves severe placental pathophysiology and needs a lot of research, LO preeclampsia intact placenta with maternal cardiovascular dysregulation may be prevented with a lifestyle intervention, in particular, low intensity exercise. Yinon reported that women with a history of EO preeclampsia or foetal growth restriction without preeclampsia exhibited impaired vascular function, which might explain their predisposition disease and their higher risk of future vascular disease. In the present study, not only some women of EO developed eclampsia but more women had renal failure, placental abruption, couvlaire uterus and PPH. Bombrys et al. reported that 36% (4 of 11) patients of EO disorder (at ≥ 32 weeks) with expectant management had pulmonary edema or hemolytic anemia and concluded that because there was significant maternal morbidity at ≥ 32 weeks with minimal and neonatal benefit, consideration was needed to be given for delivery of cases following corticosteroid administration [41].

EO HDsP, more so second trimester HDsP have more severe presentation and cause more serious morbidities. EO HDsP has more chances of renal failure, placental abruption HELLP etc. Individualized management is essential. In future if certain markers are found, a lot can be done to prevent maternal morbidity. A lot of research is needed.